If you want to complete your period outfit from the French and Indian War era, chances are you’ve been saving up for the Fort Frederick Market Fair in Western Maryland on April 22-25.

“œThe Market Fair is the most prestigious 18th-century market fair in the entire country,” says Neal Redmond. He and his wife, Margie, operate Druid’s Oak, a full-time business crafting clothing of the French & Indian and Revolutionary War periods. They have participated in the Market Fair since it began 16 years ago.

Redmond says two things that have made the Market Fair a shopping destination for both living history reenactors and the general public: the setting of the Fort and the authenticity and quality of the wares. 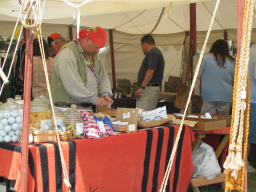 Fort Frederick served as a staging area and supply base for English military operations during the French & Indian War period, operations like the capture of Fort Duquesne (Pittsburgh) in 1758. The fort was excavated and rebuilt as a Community Conservation Corps project in the 1930s. Fort Frederick is now regarded as the country’s premier stone fortification from the French & Indian War and as one of the best-preserved military sites of the mid-1700s in the country.

“œIt’s magical,” says Neal Redmond, who has participated in living history events at Fort Frederick since the mid-1980s.

The Market Fair began as an annual effort by the Friends of Fort Frederick, a non-profit group preserving the fort’s historical legacy, to bring together today’s merchants (“œsutlers”) that are reconstructing the authentic past. 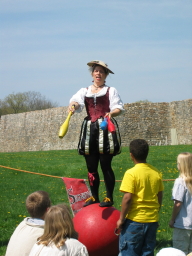 The sutlers are all juried, meaning that they are vetted by the fair’s organizers for the authenticity and quality of their wares. Redmond says that reenactors arrive from all over the country’even some from Canada, Europe’come to the fair to shop.

“œPeople save up all year and then come to the Market Fair to spend their money,” he says.

The Maryland Forces, a French & Indian-era reenactment unit, mans the Fort. There’s firing of flintlock rifles, daily demonstrations of period crafts, music, sport, and other activities. “œThere are a lot of curious public that come just to see it all, even if they’re not there to shop,” says Redmond.

Fort Frederick is situated near the banks of the Potomac River, just one mile south of I-70 near Big Pool, MD (18 miles west of Hagerstown, MD). It is less than two hours drive from both the DC and Baltimore metro areas. It is also less than half a mile from the well-developed Western Maryland Rail Trail.

If you attend the Market Fair, however, you might not want to wear your Renaissance outfit. Civil War regalia is also out of place, for clothing in the 1750s was quite different from the next century. The Fort Frederick Market Fair is a place to come and do your research’and see the finest reproductions of that period. 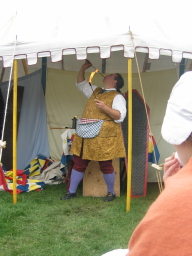 That means you will see a lot of linen.

“œLinen and wool were the major fabrics of the era,” says Neal Redmond. He uses linen when making men’s shirts and overshirts, as well as women’s petticoats, short gowns and chemises used by reenactors of the period.

One place you’re not likely to see linen, says Redmond, is on the soldier’s breeches.
“œThose are mostly wool and buckskin,” he says. “œSoldier breeches of the period are tight and the amino acids from all the sweat down there are tough on linen.”

Some sutlers, like Redmond, will have inventory and dressing rooms ready for fitting potential customers. “œWe get some people who come out of curiosity and end up buying period clothing,” he says. “œThe whole setting makes you want to get involved.”

While the sutlers and living history buffs of the French & Indian War period will be sure to spot any lack of authenticity in your costume, Neal Redmond says that you shouldn’t be afraid to show up in clothing crafted yourself. “œThat’s how I got started in my business,” says Redmond, who says he “œtorture-tested” many of his designs through the rigors of French & Indian War reenacting. “œI see a lot of really nice clothing that people have researched and made themselves,” he says.

Just do your homework, for the Market Fair is the place to be for people interested in this particular era of history.

“œWe regularly get people here who are making films and media from the period,” says Redmond. “œIt’s the place to be if you’re interested in this era.” 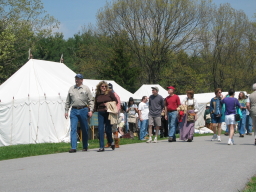 Other posts by Matthew Ernst