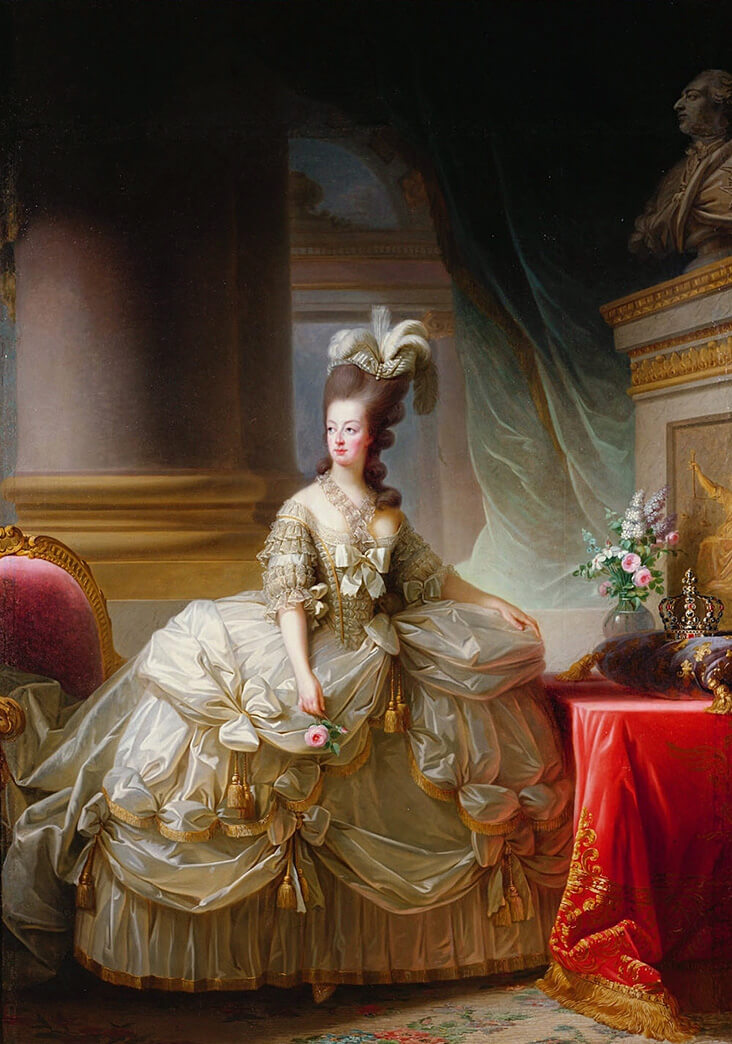 Queen of frivolity and excess, Marie-Antoinette led Rococo fashion with huge, poufy hairstyles, enormous pannier skirts and all manner of decorative frills, feathers and bows. The Austrian-born royal was thrust into the heart of Versailles from a young age, and quickly learned how to dress to impress as the country’s new Queen. Often portrayed throughout history as a naive party-girl, Marie’s obsession with clothing was also a powerful form of self-expression, exposing to the world her determined, if reckless, streak of independence.

Marie was just 14 years old when she was sent to France to marry King Louis XVI. On the border between Austria and France, she had to change into French clothing to make the right first impression, an experience that taught her the curious power of clothing in upholding nationality. Immediately thrown into the opulent, indulgent realms of Versailles, Marie was fascinated by the heady mix of fashion, politics and power, and it wasn’t long before she became the leader of courtly fashion. Marie embraced the rising trends for Rococo style, which was filled with pale, pastel toned silks, heavily layered skirts and ornate decorative elements including jewels, ribbons and ruffles. Pannier skirts, known as the guardainfante, were much sought after, but impractical, constructed on an enormously wide frame that was sometimes up to 16 feet in diameter, above which waists were pulled into tiny, restricting corsets. 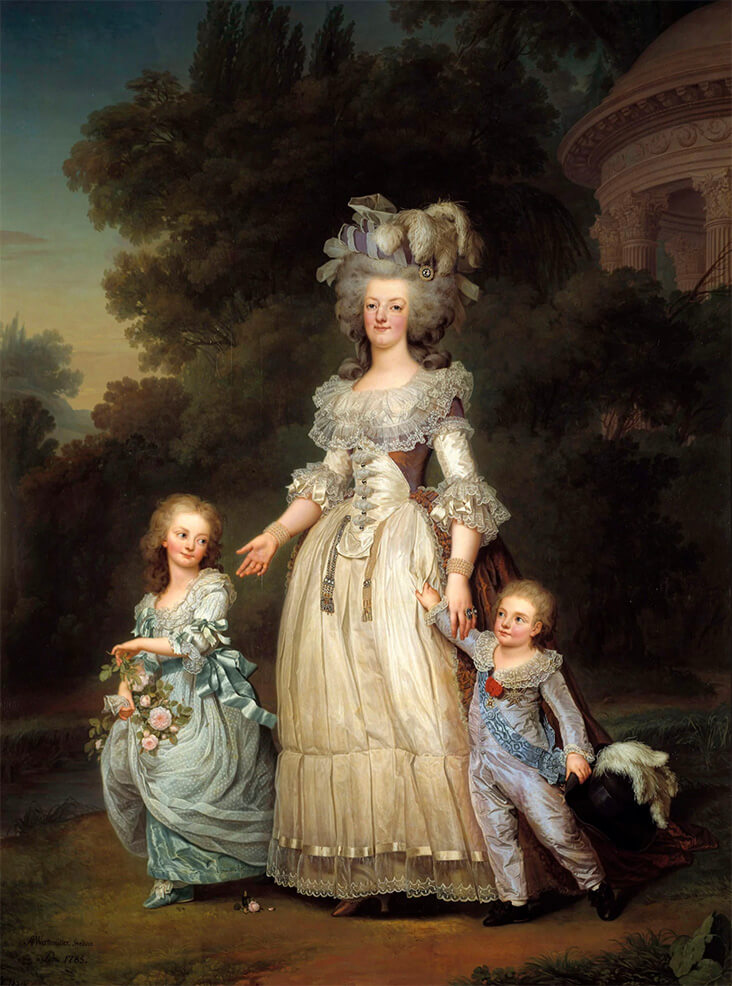 Marie also helped popularise the Robe a la Francaise, also known as a “sack-back gown,” made popular by Louis XV’s famous mistress Madame Pompadour. The dress was in three parts, an overskirt, petticoat and bodice, with characteristic pleating at the back of the dress which ran from the bodice to the ground. Many were decorated with intricate embroideries, particularly floral patterns, which Marie expressed a preference for. Other dress styles led by Marie were the Robe a la Polonese, inspired by dresses from Poland, where the skirt is lifted into three sections at the back to reveal the petticoat beneath, and the Robe a l’Anglaise, a look inspired by English menswear with a short jacket, broad lapels and long sleeves incorporated into the gown.

When Marie Antoinette’s mother, Marie Theresa, received a portrait of her daughter dressed up in the latest French finery, she was said to be appalled by the lack of restraint, writing to her daughter, “… fashions should be followed in moderation but should never be taken to extremes. A beautiful young woman, a graceful queen, has no need for such madness.”

As her time in the royal court grew, Marie became increasingly frustrated with the strict dress codes and began breaking the rules. Her personal hair stylist, Leonard, took her love of wigs to new, gravity-defying heights, as well as introducing pastel coloured powders, and adding decorations including flowers, feathers, fake birds, pearls, lace, diamonds and even small toys. Marie also employed her own in-house dress designer, the renowned Parisian couturier Marie-Jeanne Bretin, known as “Rose”, who she titled her “Minister of Fashion”, encouraging her to create ever more indulgent and extravagant designs. The extent of her frivolities began to increasingly anger the poverty stricken French public, who painfully felt the divide between them and the hedonistic royals. Even Marie’s own brother, Joseph II of Austria, mocked his sister, calling her elaborate wig “too light to bear a crown.” 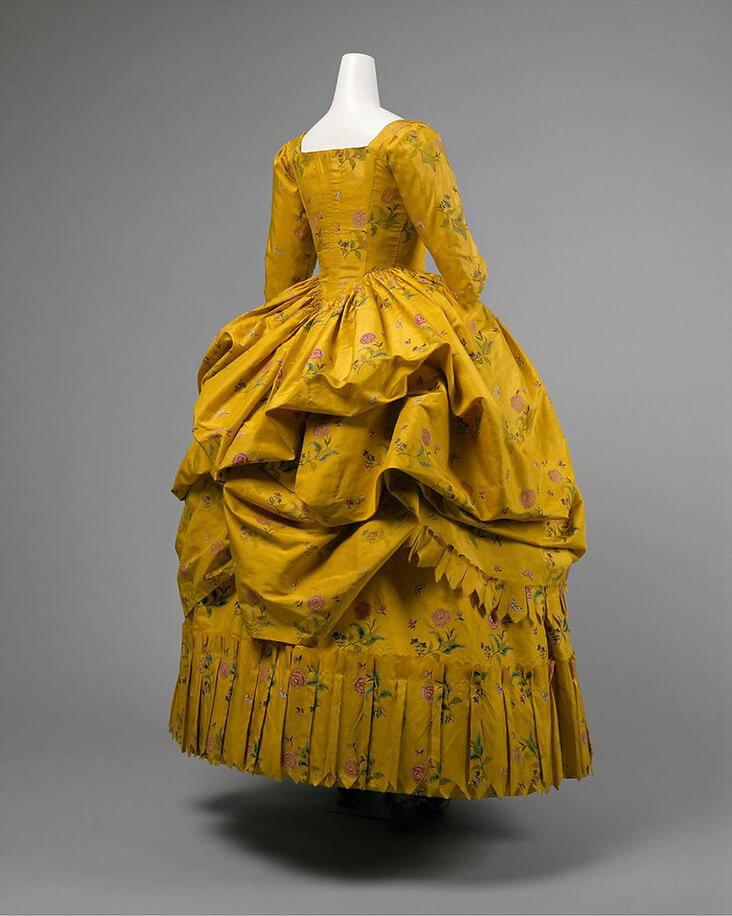 The Robe a la Polonaise famously worn by Marie Antoinette

When he became King, Louis XVI had gifted Marie with her own chateau on the grounds of Versailles, which was her escape from the oppressive culture of court. The King granted her total freedom with the space, only entering himself on her permission. Marie had the place set up like a rural farm, where she and her ladies in waiting would wear loose, uncorseted dresses and have their long hair flowing over their shoulders.
But Marie caused a huge scandal when she had her portrait painted as a mock-peasant, in a long, white cotton dress which looked like little more than underwear. Breaking down barriers between royals and real people in this way had never been done before, and though the public were appalled, Marie’s dress, known as the “chemise a la reine”, or “chemise of the queen,” gradually caught on, first among the Queen’s friends, and later across Europe. Adopting, and unwittingly popularising fabric from colonised India rather than France was a decidedly unpatriotic move from the Queen, one which would play a part in unravelling both the French silk market, and eventually the entire monarchy, as the French Revolution took hold.