Colors Fit For A King

Let’s be honest, arming and equipping a small medieval army is not easy. They don’t sell broadswords at Walmart and searching “fully trained warhorse” yields no results on Amazon. Luckily, I had at least one place to start, BIKING RED.

When you set out to make a short film about the rise of perhaps the most legendary king of all time, you have to make the man look impressive, and it only took about 200 yards of linen to do it. While I am generally a  big fan of wonderfully muted earth-tones, Arthur Pendragon needed to stand out. So a few bolts of BIKING RED later, Surcoats, cloaks and other little details (notice that braid on his helmet?). The once and future king was garbed for war. 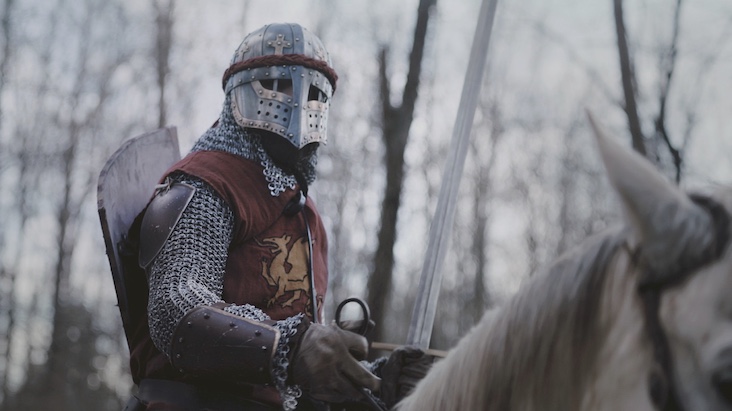 When dealing with a legend such as this, part history, part fantasy and part our own creation, we knew that our costume design would play a key role identifying our characters. I mean, how many times have we seen King Arthur on screen, in the pages of books or in classic art? We used legendary illustrator N.C. Wyeth’s century-old illustrations as a starting point for our own look, and the most prominent aspect of Wyeth’s paintings? Arthur’s red surcoat. 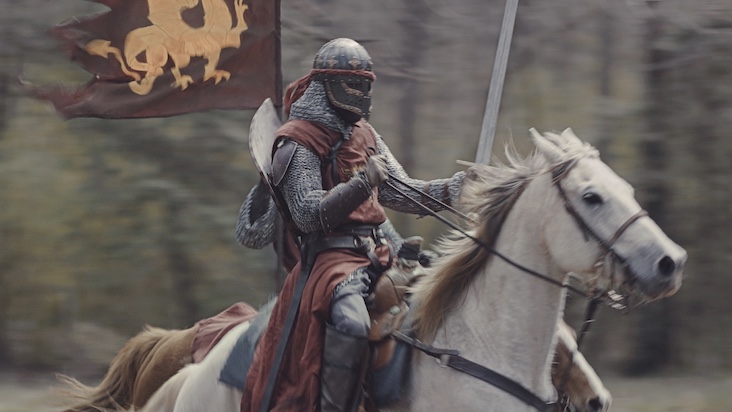 But far more goes in to a film’s look than the design of the titular role! We also introduced a group of Nubian mercenaries in this our second instalment of the story. I privately confess that a large motivation for adding characters from another continent was I wanted to use the new JACQUARD patterns! 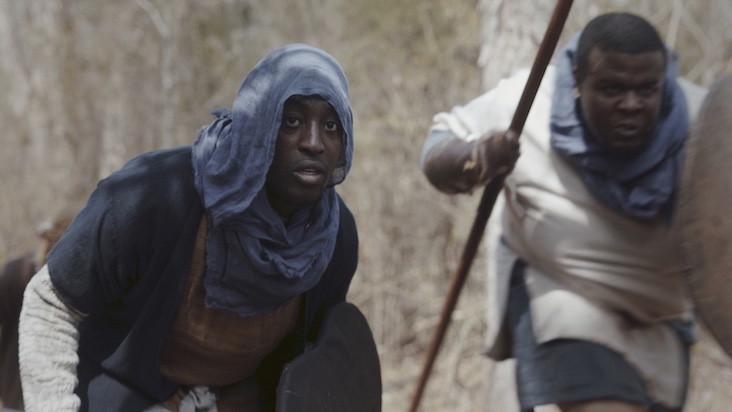 The texture on the reversible GOLDEN WHEAT is also possibly my new favorite thing. It gave amazing definition to the garments as well as providing a very different look to what the European characters were wearing. We also experimented with sheer VINTAGE INDIGO for our Nubian head wraps and scarves. It looked amazing and the actors absolutely loved wearing it for its light weight and breathability. 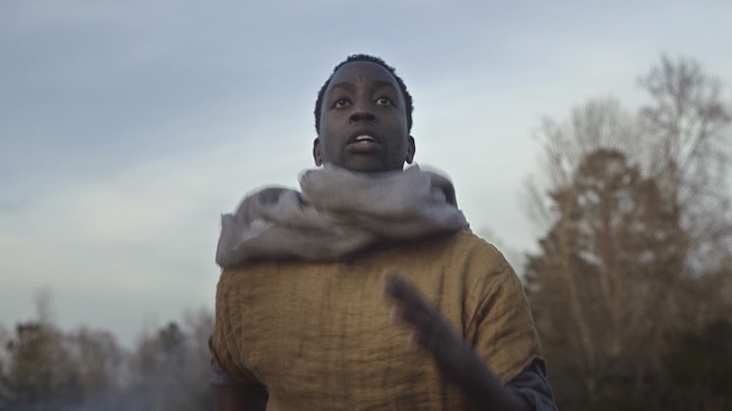 There were so many other characters to design too! And yes, I got to revel in my favorite muted earth-tones! CAROB and Olive Branch along with POTTING SOIL and GINGER garbed the English archers and men-at-arms. 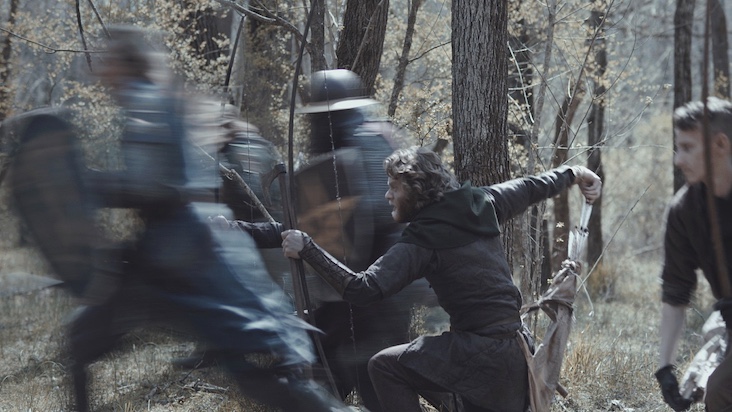 While other knights like Gawain and Tristan were set apart by brighter colors like DULSE and MALACHITE. 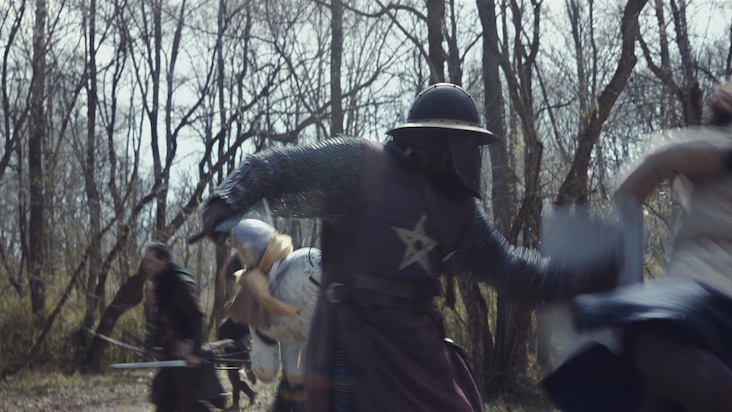 The bad guys, Basque raiders in this case, wore a variety of grays including GRAPHITE, and MONUMENT with AUTUMN GOLD for accent. 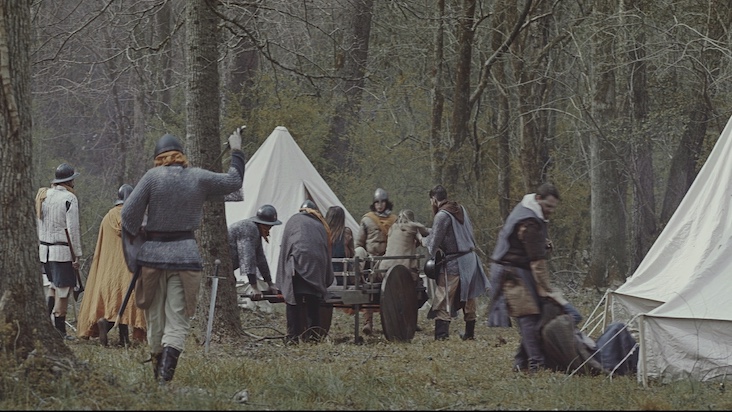 With that settled, all we had to do was choreograph a cavalry charge, forge new swords, and find a location that looked like Spanish mountains in winter all while hoping not to die of the plague. You know, normal stuff. 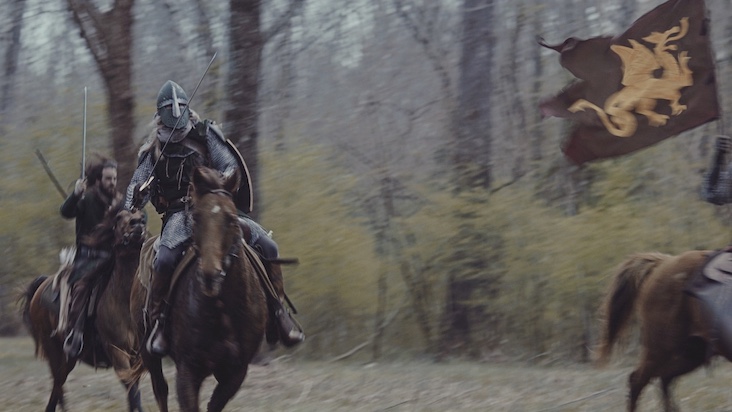 Many thanks to Fabrics-Store for helping make this project possible. Nothing makes a good medieval costume like linen!

This adventure isn’t just timeless, it’s for all ages and perfect to share with family, friends and anyone who wants to let their imagination run free.

Do you think these colors worked? What other stories could we tell? Let us know what you think, your feedback helps us deliver the content you most want to see from us. Thank You for adventuring with us.

Other posts by Zan Campbell

Natalia Goncharova: The Spirit of Russia

“A spark of the spirit lives in us, it is connected with all spirit. It is divine. It is drawn to other, similar sparks. This is the urge to creation.” Natalia Goncharova was an explosive force of creativity, encapsulating the wild spirit of avant-garde Russia with painting, printmaking, performance and design. Throughout her long, prolific…

The Name of My Shop is “The Odom Reunion”

Is there anything more amazing than seeing a piece of plain cloth transformed into something spectacular? Seeing that “flat” piece of fabric, once it gets into the creators hands, go from material to a creation is nothing short of miraculous. I will never get enough of seeing what you guys will come up with next….

Every age has its legends. Stories of people who go above and beyond in the cause of justice and hope. People who sacrifice their lives for what they deem to be right. A thousand years ago it was Lancelot and Robin Hood, today it is Batman and Wonder Woman… and Robin Hood – let’s be…

Fashion Choices For The Bad Guys.

Well, usually we do good guys, but every once in a while you have to let the bad guys out to play (for artistic purposes of course!). With Halloween coming up, we decided to let our creative juices flow to the spooky side! The most iconic bad guys in film and literary history always have…

The Color That Built A Kingdom.

Sometimes inspiration comes from giant mountain vistas, breathtakingly beautiful music or deep-felt emotions. Other times it comes from a very specific shade of blue. Yes, it is nothing epic to look at, but when I ordered three yards of Blue Bayou fabric, it changed my life. Honestly, I had no plans for the fabric, I…