The Ancient Greeks knew a thing or two about elegance and simplicity so it is no surprise that one of their most popular fabric choices was linen. Linen’s versatility and beautiful draping made it the perfect choice for the fashionable Greeks of the Classical Period. Crinkled linen was very fashionable and was produced either by sewing the crinkles into the fabric or with starch. Another fashionable choice was to make a shiny version of linen. This was done by working oils into the weave. The Greeks favored decorated hems on their linen, typically the iconic key pattern or a botanical pattern with leaves, vines and flowers. These borders were usually dyed in a darker shade than the rest of the cloth to accentuate the pattern. 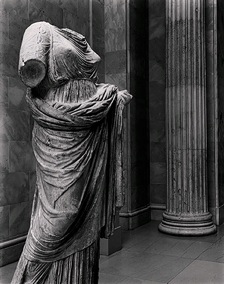 The primary clothing staple for Greek men and women was the chiton, which eventually evolved into two different styles. The first and simplest was the Doric chiton. A Doric chiton was basically a tunic made from one or two lengths of cloth that were folded, pinned and belted to fit the wearer. The Doric chiton was also known as the peplos when worn by women. Women preferred linen peplos. It was made by folding a piece of cloth to form a double layer at the top. A girdle was worn to cinch the garment at the waist while fibula pins were worn to fasten the linen at the shoulders.

The Ionic chiton became fashionable later than the Doric chiton but did not replace it. Both styles were worn by men and women. However, the Ionic chiton required more than simple draping and pinning. The Ionic chiton was a rectangle of linen, folded in half and then sewn down the long, open side. It was then pinned at the shoulders with fibulae. Women’s Ionic chitons were pleated to accentuate their femininity. Additionally, women sometimes put oval weights into the hem so that the chiton would drape and cling to the body better. Many women also wore a light linen shawl called a pharos which served a dual purpose. It provided warmth in the winter by draping it over the head and as a beautiful accessory during the warmer months when worn draped across the body as a scarf.

Linen was so popular in Classical Greece that women also used it in their hair! Dressing their hair beautifully was very important to Greek women. A very common and elegant hairstyle choice was the chignon, especially when worn with a headdress. One of the most frequently seen combinations was a chignon worn with a crescent shaped tiara called a stephane. The stephane was often joined to a linen bag that supported the chignon.

Evidence of a thriving linen industry in Greece has been found on clay tablets that date back 4,000 years. Though the Greeks loved to use linen fabric for their clothing, they had other uses for it as well. One of the most surprising applications was for armor. Considered Greek by many, it is believed that Alexander the Great and his men wore linen armor. In fact, Plutarch claimed that Alexander wore a breastplate of doubled (or folded) linen. It is unfortunate that no examples of this armor have survived. However, through descriptions, paintings and sculpture, archaeologists believe they have reconstructed something very similar to Alexander’s Kevlar like armor. Called linothorax, the armor was made through laminating several layers of linen with a type of simple glue made from flax seeds or rabbit skins. Linothorax was very strong, a fact that has been proven by archaeologists through rigorous testing. It is through such tests that archaeologists now believe that Linothorax would have held up to the weaponry used in battle during Alexander’s time. 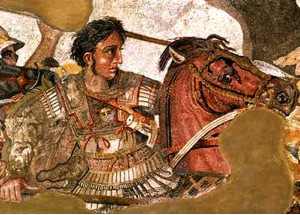 (Mosaic of Alexander the Great found in Pompeii, believed to be wearing linothorax armor)

These are just a few examples of the myriad of ways in which linen was used by the Ancient Greeks. From their elegant and simple use of linen fabric for clothing to the ingenious use of linen as armor, we can see that the Greek peoples found linen to be a beautiful and highly functional fabric.