In the late 1600s a fontange was high fashion for ladies hair. This was a tall head-dress consisting of a wire frame (or ‘commode’) adorned with lace or linen frills. It was worn at a slight forwards angle and attached to a linen cap. In appearance it resembled a half-opened fan and it could reach a considerable height. The term fontange can be variously used to describe the hairstyle, the wire frame which eventually underpinned it or the linen cap worn with it. 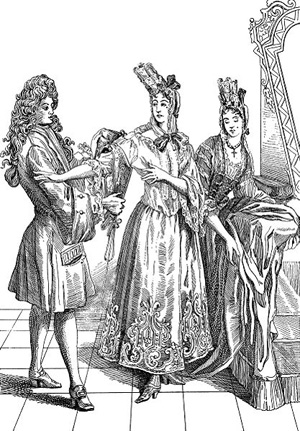 The fashion was imported to England from France and was named after Marie Angelique, Duchesse de Fontanges. Marie was a lady-in waiting at the French court. Her prettiness caught the attention of the Sun King, Louis XIVth who made her one of his many mistresses and a favourite for a time. The Duchesse de Fontanges bore the King a stillborn child in 1679 and then retired to spend the remainder of her short life in a convent, where she died in 1681.

During her period of royal favour it is said that she tied her hair up with a ribbon when her cap fell off as she was riding one day. The results met with royal approval and led to the style being adopted at court. Initially the style was simply for a ribbon looped in the hair or in the linen cap with the hair curled up from the forehead but as time went on the fashion developed into an ever taller wired head-piece (‘commode’) with furbelows of lace or linen and with the hair piled into layers of elaborate curls and locks.

“œFor Tour on Tour, and Tire on Tire,

These lines relate to the piling up of layers and the height of the fontange with Bow and Grantham both being churches whose steeple and spire Evelyn is comparing the heights of the hairstyle to. This upwards trend was part of a general fashion emphasising the vertical line in style at this time.

Usually two long linen streamers hung behind the fontange which could be turned and pinned up or which could fall down as cornets along either shoulder of the wearer’s dress. The linen cap worn underneath was starched to stiffen it. At the front hair was pinned onto the wire frame, known as a “˜commode’ or “˜palisade’. This French fashion gave rise to a host of terms for variations on curls and ringlets and ways of dressing hair. This included “˜confidants’ (small curls near the ears), “˜favorites’ (curls hanging from the temples) and “˜cruches’ (small curls on the forehead.)

For the fontage style the hair at the front was curled and raised high above the forehead and wired to the palisade or commode. The Tower or Tour was the name given to false curls which were added to the fontange to increase the effect or supplement the coiffure. In addition to the lace or linen adornments ribbons known as “˜knots’ were often furled around the Palisade. An example of this can be seen in the portrait of Queen Mary II of England by court painter Godfrey Kneller in which she wears an elaborate lace fontange with ribbon knots and cornets and a tour of curls.

To amplify the effect of the fontage a “˜firmament’ could be worn, which was a dazzling array of diamond-headed pins.

The fontange reached the peak of its popularity around 1690-1700 but continued to be worn for another ten years or so, gradually reducing in height over that time as women struggled with its unwieldiness.

Other posts by Lynnen MacNab Conner