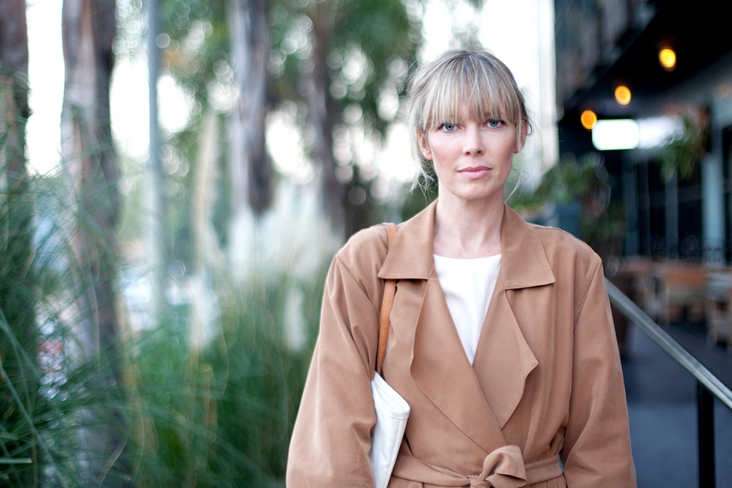 For us, the people behind the clothing’ and stores we love are just as, if not more important than the things they create. It’s the people that inspire us and add to our overall experience of a brand. One of such people is Jesse Kamm, an example of a modern woman who is intuitive about using’ modern ways in her business – respecting nature, managing motherhood and work and maintaining a refreshing attitude.’ She makes stunning designs that allow women to feel feminine, clothes that are not imposing-‘ clothes’ that empower. Above all she is living a life she wants to live – doing what she loves and raising her family in harmony, which is’ something we admire hugely.

When Jesse’ started her eponymous fashion label, it was completely accidental. After making clothes for herself, creating textiles and sewing her own dresses she suddenly found herself in demand for her one-of-a-kind pieces from friends, shop-owners and designers. This was in 2005 after she’d left her modeling day job feeling unfulfilled, and nearly ten years later she hasn’t looked back. Not only is her small label thriving’it’s sold in 20 boutiques nationwide – she has a reputation amongst the LA Eastsiders and Brooklynites for being the go-to boho designer.

Kamm wasn’t always so comfortable in doing what she does and says she used to feel like a fraud because she didn’t study’ fashion design and didn’t fit in the “˜fashion’ box.’  Growing up in the Midwest, she thought that working in fashion was never a possibility for her. She finds the word “˜fashion’ is exclusive and “œharshes her mellow”, conjuring up feelings of ugliness for herself and others. Her philosophy is simple, Jesse says: “œI like clothing. I like getting dressed. I like looking good. I like feeling comfortable in what I wear. I love helping other people feel comfortable in what they wear”.

Her label is everything a regular style parade isn’t: serene, minimalist, trend-proof, and monochromatic, somewhat of a palette cleanser. Each season her line is made up of enduring classics – each piece is loved and adored and chosen with intention and meaning, clothing that tells a story of time, place and purpose. The pieces all clearly have Jesse’s hand in making, partly as they seem infused with her own philosophy and partly because she is her own customer. 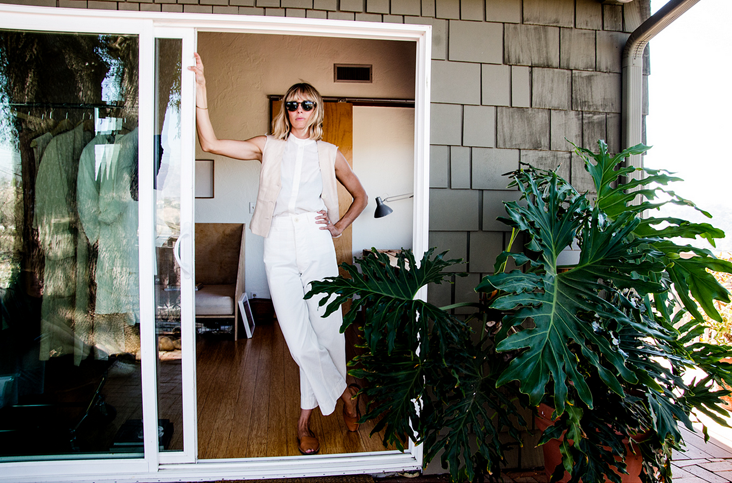 Jesse is highly involved in the design and production process because she likes to be in control; she does sales, she does press, she does fabric delivery and is a great believer of the phrase “˜if you want something done right, do it yourself’. Kamm knows what she wants and wants it done to the best it can be, so she does it herself. Jesse is committed to delivering a certain level of quality to her customer so she is the one making certain that it is delivered.

As for her customers, Jesse designs for the woman’ who wants to look good, but who also wants to feel easy, who knows what she wants and is comfortable enough to wear it endlessly. She thinks her typical customer genuinely cares about where the clothing comes from, something which she respects massively. Kamm uses dead-stock fabrics and has a company car that runs on vegetable oil – sustainability efforts which make her designs even more appealing. 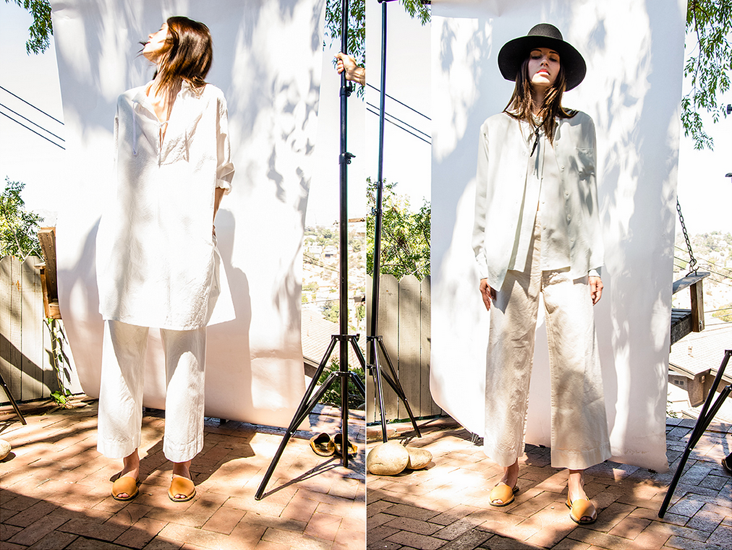 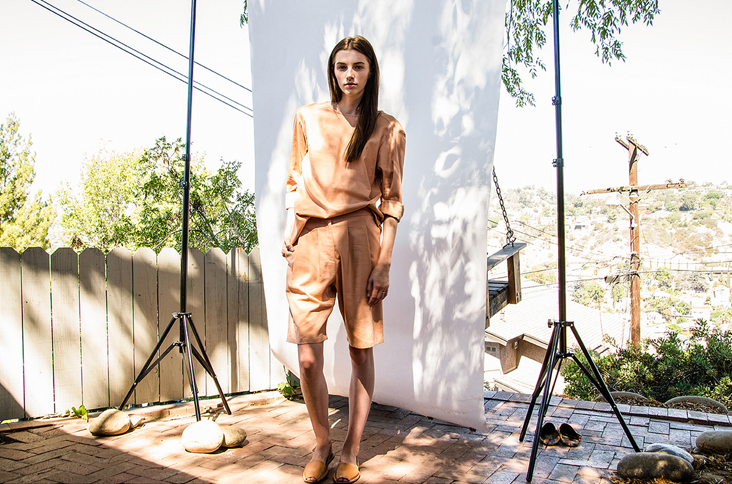 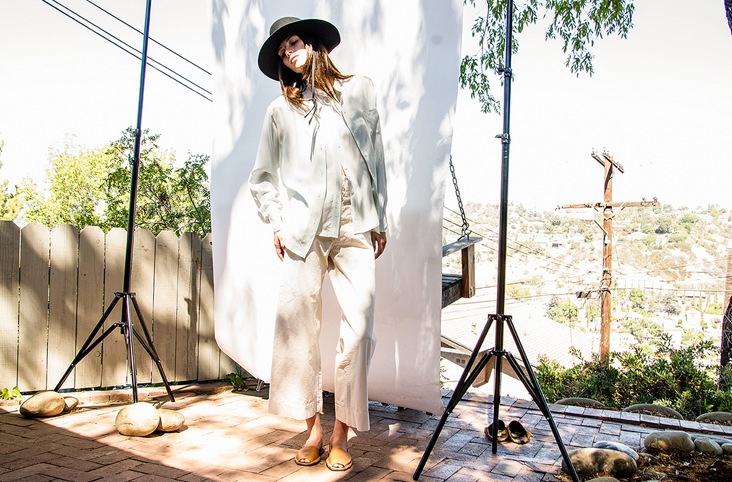 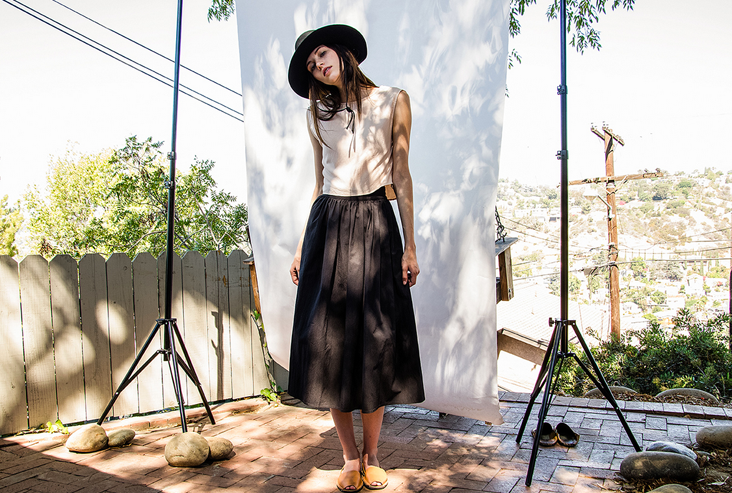 The aesthetic of Jesse’s clothing translates into versatility, and textile designer Heather Taylor says she can wear Jesse Kamm to a wedding or to a farmer’s market – “œit can become a uniform without becoming boring”. Her personal style is ever-changing, but she urges people to buy what makes them feel great – if it’s not a must it should be left on the rack for someone else.

Jesse says she is inspired by the world around her when she designs clothes – “œunderpasses, the flora growing on the side of the highway, cracks in the street, a tear in a jogger’s sweatshirt, the color of the sky when I open my eyes in the morning. I find a great deal of beauty in the most unlikely places”. After she graduated from university, she moved to California to begin a five year modeling career where she traveled the world and saw many beautiful things, but also many ugly things. These years instilled in her a love for finely made clothing, photography, history and truth. Jesse also takes inspiration from her peers and culture; for the last few seasons she says she has been fairly obsessed with Issey Miyake and the fabrics he creates, Don Judd’s furniture design and Claude Chabrol films. Most importantly she is moved and inspired by her friends and their work: Hilary Walsh, Katrina Dickson, Sophie Buhai, Eliza Kenan, Claire Oswalt, Jasmine Shokrian, Claire Cottrell, Elisa Restrepo. These are women who are doing great work, raising families, running their own brands, and doing it so beautifully.

She now lives in Mt Washington in Northeast LA with her husband and son Julien, spending 3 months of the year in Panama. By her own admission, she worked a lot harder before Julien came along, but he changed her perspective on what matters in life. Her son also changed the way she dressed and designed clothes – everything became more mature and chic, something which actually did very well for her sales. Jesse has become one of these women she so admires, raising her family and running her own brand beautifully. Now, she feels she is a person who can let everybody know we can make our own way and achieve whatever we want to. One of the most important things to take away from Jesse’s story is the fact that she saw an opportunity and she took it.

You can find Jesse’s designs in boutiques across the US, as well as online on Net-a-Porter and her own web store. Follow her Instagram for Bohemian Modern inspiration too.