The Many Uses of Linen throughout the Roman Empire

Like the Greeks and the Etruscans they eventually conquered, Roman men and women prized simplicity and elegance. They were also very fond of linen. While Roman clothing copied many Greek and Etruscan styles, the Romans also included fashions from other conquered regions that formed the Roman Empire. Like most other Ancient cultures, the Romans took full advantage of the versatility of linen and incorporated it into a wide variety of applications. 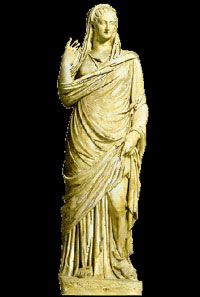 Roman women had three main fashion staples, the tunica, the stola and the palla. Married Roman women were required to wear the stola over the tunica. The stola was much like the Greek women’s chiton. It was an ankle length robe with or without sleeves and it was often made out of linen with a colored border around the neck. It was usually fastened with clasps and girdles were worn just below the bust and around the hips. Women wore the stola in a number of different colors and sometimes the cloth was embroidered with gold thread.

The other staple of the Roman woman’s wardrobe was the palla. The palla, which was worn over the stola, was a long rectangular piece of cloth. It was usually linen or wool and was worn draped over the head and one shoulder. Noble women also wore a linen outer garment with half sleeves called a sapparum. Although female clothing was originally free from any decoration, it became very richly decorated during the Imperial period.

Roman men’s fashion consisted of two basic pieces, the tunica and the toga. The tunica was also very similar to the Greek chiton and was worn by men of all ranks. The tunica could be short or long and could be worn sleeveless or with short sleeves. The tunica was most often made of linen and decorated with two vertical stripes or tapestry panels. The tunica talaris was later adopted and worn by men and women. Made of linen, it was ankle length with long fitted sleeves and was brightly decorated. A special type of tunica called a tunica laticlavia was worn by senators. It was short sleeved with two vertical tapestry stripes from shoulder to hem, front and back that were colored with a dye made from shellfish called murex.

The other main staple of the Roman male wardrobe was the toga. The toga was a large semicircular piece of cloth worn draped over the tunica. However, to wear the toga, men had to be actual Roman citizens. There were several different types of togas and they were used to show ones status in society. For example, the plain white toga virilis could be worn by any adult man. In contrast, the toga praetexta had a purple boarder and was worn by boys under sixteen or by Senators and Magistrates.

The Romans had a wide variety of uses for linen. It was used as sailcloth on Roman ships and was often dyed with bright colors. Additionally, brightly dyed linen was often used as awnings to provide both beauty and shade to the Roman people from the hot summer sun. Linen was also used as the wicks in the olive oil lamps that were so popular during the Roman period. More uses for linen include the linen napkins that were always used during the ever important Roman banquets. It is said that the poet Catallus once received some high quality linen napkins as a gift. One of them was later stolen from him by a dinner guest. Catallus was so enraged over the loss of his linen napkin that he wrote a poem about it!

Although no examples survive today, the Romans also created the Libri Lintei, which literally means books written on linen. These books were lists of magistrates that were stored in the temple of Juno Moneta. Historians such as Livy consulted these books and it is unfortunate that none of them survived.