Linen- the heart of fashion in Ancient Egypt

Ahhh, linen. It is beautiful, versatile, durable and luxurious. It is no wonder that the Ancient Egyptians, rich and poor alike, prized it above all other fabrics. The hot climate of Egypt made lightweight clothing mandatory and linen offered the perfect solution. The flax could be woven into a fine weave that kept the wearer cool, a must in the hot Saharan desert. Egyptian weavers were skilled at their craft. They were able to produce linen cloth that was so sheer and delicate it was almost like gauze. 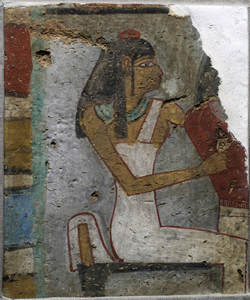 In stark contrast to the elaborate Egyptian costumes worn by Elizabeth Taylor in Cleopatra, Egyptian fashion was actually amazingly simple. It changed very little through 3,000 years of rule. The few new styles that were introduced were simply worn alongside existing dress. The same basic styles were worn by most Egyptians. The quality of the fabric reflected social position; the finest linen, woven with gold threads was worn by the Pharaoh. It is said that Cleopatra VII, who possessed a legendary wardrobe, wore linen dresses that were woven with gold. Slaves and commoners, on the other hand, wore loincloths made from coarse linen or leather.

Until the Eighteenth Dynasty (New Kingdom), most Egyptian women wore the kalasiris, a simple linen sheath that usually fell from below the breasts to just above the ankles. It could be held up by shoulder straps or sleeves.

The kalasiris is traditionally depicted in paintings as a very tight, form fitting garment, but some dispute has been raised about how accurate those depictions are. According to some archaeologists, in reality, the kalasiris was probably more loose and flowing. 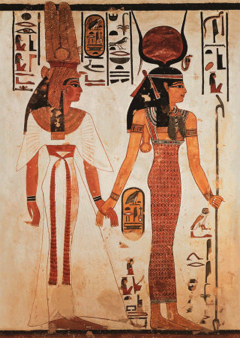 This not only would have allowed for greater ease of movement but would have kept Egyptian women cooler in the hot climate. Others say that there is no reason to assume the paintings are inaccurate and that the kalasiris was probably as tight fitting and quite possibly as sheer as the tomb paintings illustrate. Surviving pieces show the kalasiris was essentially a length of linen sewn down one side to create a tube. A shawl could be worn to protect the skin from the sun or on cooler winter nights for warmth. During the Eighteenth Dynasty, the wives of the nobility and the pharaoh, such as Nefertiti, the wife of Akhenaton, are depicted in new, more elaborate fashions. The new garments were long, flowing robes of linen so fine that it was almost transparent and covered in dainty accordion pleats. The kalasiris was sometimes worn underneath these robes, but sometimes the robe was worn by itself.

The basic staple of men’s clothing was a linen kilt called a schenti. Much like the women’s kalasiris, the schenti kept the same basic shape for 3,000 years. The schenti was a rectangle of knee length linen cloth that wrapped around the waist and fastened in the front by overlapping and tucking the ends. Like women’s garments, paintings depict more elaborate men’s dress during the New Kingdom. This new costume consisted of a pleated schenti and a long, sheer, pleated robe. Another option was made up of the schenti, a transparent overskirt and a collarless shirt with wide, pleated sleeves.

Most Egyptians wore white linen clothing for functional as well as symbolic reasons. For the Egyptians, white symbolized happiness, so they were content to wear clothing of this color. Though the Egyptians did develop methods of dying linen different colors, it was a difficult process because linen did not readily absorb the natural dyes. For this reason, most clothing was made from bleached linen.

Linen is so durable and the Egyptian climate is so wonderful for preservation that quite a lot of clothing from Ancient Egypt has been discovered. Sir William Flinders Petrie discovered the oldest surviving dress in the world in a First Dynasty tomb at Tarkhan. It is 5,000 years old! It is made of intricately pleated linen and gives some example of the fine workmanship of Egyptian weavers. The dress is now on display at the Petrie Museum in London.

The Ancient Egyptians were masters at creating beautiful garments that have literally stood the test of time. When you start choosing items to add to your summer wardrobe, consider adding a few more linen pieces. After all, with proper care (and just the right conditions) those pieces could last 5,000 years!