Balance, symmetry, and longevity: three traits shared by an artist and his linen canvases.

A work 12 years in process, Marek Tobolewski’s ongoing Continuum series is a dizzying array of lines drawn, erased, redrawn, removed a second time, and finally settled upon. While the British native has a thing for correcting and re-correcting, the final product can leave viewers with one of two immediate responses: unsatisfied or overwhelmed.

Unsatisfied because of the seeming simplicity of the works. Overwhelmed by the sheer magnitude of a single Tobolewski piece. But upon further study, most are grasped by a sense of wonder. Because suddenly they realize that Tobolewski didn’t randomly scribble on top of a 50-square-foot piece of paper. There was immense, intense purpose. Each line, as random and unconsidered as it may seem on first glance, has its twin elsewhere in the piece. The entire work is a study in symmetry, as one half is amazingly mirrored in the other. 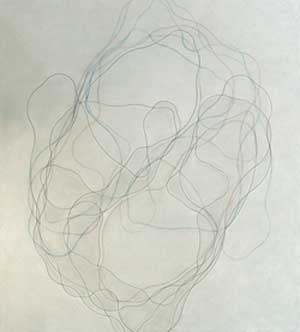 Of course, it isn’t always clear what makes the image symmetrical. Look long enough and the symmetry begins to show its face. And the symmetry sings most beautifully on those pieces painted on linen canvas. One of these, “œ3 Line Continuum – Magen,” contains the faintest oil lines streaming across, up, and down the canvas, with gentle oil shading in facing corners.

It is as if Tobolewski accented the perceived delicacy of linen, while juxtaposing its actual tenacity and allowing the canvas to breathe and speak for itself. And his technique finds great success. In the painting, the large rectangular canvas does the job Tobolewski declines: that of the storyteller. Stretched nine feet high, the taut linen tells of echoes and reflections, of uncertain certainties and the harmony that only balance can achieve.

Some of Tobolewski’s Continuum pieces that he created on linen were commissioned to reflect the environment in which they were to be displayed. “œ3 Line Continuum” was designed in response to a private owner in New York, and a diptych that resonates with the symmetry of the gallery in which it was installed was commissioned for Continuum in Balance. Whether Tobolewski was aware of the fact or not, this use of linen is rather appropriate. While he could have used other canvases (paper, cardboard, wood, etc.), linen is especially able to reflect its environment.

An individual wearing a linen shirt, a linen skirt, or a linen suit; and a couple lying down on top of luxurious linen sheets understand the flexibility of linen and appreciate its innate ability to fall in pleasant places. Those same places that lie underneath the linen garment. Likewise, the linen canvas opens the door for Tobolewski’s paintbrush to stay on its seemingly reckless but painfully well-planned course. And once his brush has made its mark, the resilience of the linen canvas ensures the work will not be compromised over time. Because like Tobolewski’s near obsession with symmetry, the linen canvas shall pass the test of time.

Other posts by Daniel Brantley