The importance of using the correct fabric for historical clothing

Like many historical reenactors, when I started in this hobby, the clothing I wore was just the means to an end. We have to wear correct historical clothing in order to participate in our hobby. It’s our uniform, just like footballers wear shoulder pads and helmets and baseball players wear cleats and caps. It’s also important for us to wear the right uniform for the occasion. You can’t show up at the Battle of Hastings wearing jeans and a T-shirt and expect to look like a Norman knight. By the same token, you can’t show up to an English Civil War reenactment dressed in 14th century kit. It’s simply the wrong clothing for the occasion. And since we like to think our events are more than just elaborate historical costume parties, we’re sometimes rather strict.

But living history reenactors aren’t strict because they want to be exclusionary or because they’ve had a bad day at the office and want to be mean to you. We simply take pride in getting all the pieces right and accurately portraying a certain period in history. We’re sticklers for detail and the little things are tremendously important to us. 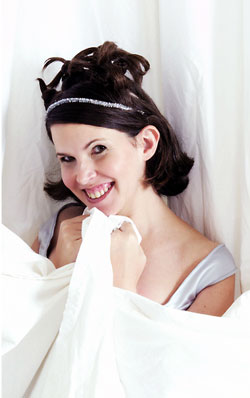 Our hobby is about half history and half theater but it’s the theater part that many people get confused about. In theatrical costuming, it’s important to look the part. However, it’s not so important to feel as if you really are living in Ireland in the 16th century as it is in living history. If there’s a hidden zipper in the back of your gown or you’re wearing modern shoes, as long as the audience doesn’t see it, it doesn’t matter. But in reenacting, these kinds of shortcuts are taboo. However, today I’d like to share with you the deeper reason why we insist on using the right materials from which to construct our "uniform".

It’s oft been said that you can’t make a silk purse out of a sow’s ear. But what about a 16th century smock out of a modern microfiber or a poly-cotton blend? Many believe that the reenactors’ insistence on period-accurate materials is pure snobbery paired with a rejection of things modern. This simply isn’t so. The truth is more akin to the saying "If it ain’t broke, don’t fix it." In spite of increased technology and sophisticated modern thought, the best material for a typical 16th century smock is still the stuff from which 16th century seamstresses made smocks: Linen.

No other fibre feels like linen. Nothing else moves like linen. And most importantly, nothing else reacts to the sewing techniques and pattern shapes like linen. As with all things, if you want to make a replica that will teach you about the original from which it is copied, but must use the same materials. Even substituting cotton or a linen-cotton blend for 100% linen will change the result dramatically. Linen has an inherent crispness that makes pleating a dream. You can literally do it with your fingers as you sew! And that same crispness will make the linen stand away from your skin in the heat. This increases airflow to your skin at humid summer reenactments. Paired with that crispness is a stability that makes linen perfect for lining bodices, jackets, waistcoats – anything that requires substance without stiffening. And linen breathes. The Ancient Egyptians wore linen in their hot climate. And our European ancestors wore linen under garments in all weather until the beginning of the 19th century. Millennia of ancestors can’t be wrong.

So to answer our question: Why linen? Well, honestly, why wear anything else!

If you’ve ever browsed the linen stock at Fabrics-store.com, you may be overwhelmed by the sheer amount of different types and styles of linen and wonder how you could ever be expected to know which type is the right one for you. Well, that’s why I’m here. Knowing the correct fabric to use truly takes many years of experience both studying extant historical sources and comparing swatches from modern fabric manufacturers. But today, I’m going to give you the goods in a nutshell so that you can buy linen for your historical clothing project in confidence at Fabrics-store.com.

First, let’s make things easy. Rather than get into a discussion of what colors are appropriate for what period of history, let’s just focus on the subject of fabric weights.

The first fabric we’ll talk about is IL020. This is a 3.5 oz linen that runs 57" wide. Sometimes called "handkerchief linen", 3.5 ounces is very lightweight, but not light enough to be considered sheer. However, don’t expect to hide behind it. This weight linen isn’t heavy enough to hide skin color. In other words, don’t run around camp in a handkerchief linen shift unless you want to be known as "The Streak". It really leaves nothing to the imagination!

Handkerchief linen is suitable for under-dresses, shifts, smocks, men’s shirts, caps, linen headdresses, veils, falling bands, collars, cuffs, and neckerchiefs as well as handkerchiefs. Throughout history, the finest, whitest linen was reserved for the upper classes. So if your persona is of the nobility, Fabrics-store.com’s 3.5 oz. linen is perfect for all your body linens. Depending upon the width of the sleeves, three yards should be enough to make an ample undergarment.

IL020 comes in a variety of colors and also two types of white: Bleached and Optic White. For reenactment purposes, I recommend Bleached. Bleached has a slight yellow cast that makes it closer to the color linen would have been before the invention of chlorine bleach. Optic White appeals to our modern sense of "white", but it is too artificially bright to look correct for historical clothing. Have no fear. Fabrics-store.com stocks plenty of both!

Our next fabric is IL019, a 5.3 oz linen that comes in 59" widths. Fabrics-store.com is right to call this mid-weight linen "universal". It’s substantially heavier than the 3.5 oz but not as bulky as the 7.1 oz we’ll discuss below. It can be used for the same garments outlined above, but in 5.3 oz linen, the garments will be much less see-through. If portraying a middle-class or common person, this would be a terrific choice for your body linens. Again, "Bleached" is the perfect color choice.

But wait a minute, kids! The beauty of IL019 doesn’t end there. There’s a reason they call this stuff "universal". This linen is truly versatile in that you can use the same weight to make outer garments as well as body linens. Petticoats, gowns, jackets, waistcoats, and breeches can all be made out of this mid-weight linen. So find the colors appropriate for your time period and go crazy. IL019 is a wonderful linen. I always keep a good stock of this versatile fabric.

And last but not least – 4C22, a 7.1 oz. linen 59" wide. This hefty fabric is too coarse for body linens, but it’s just the thing for everything else. Breeches, petticoats, dresses, waistcoats, tunics, kirtles… Just about every garment you can think of can be made out of good ol’ 7.1 oz linen.

NOTE: Be sure to research whether linen was used for these garments in the time period you wish to portray. In many cases, linen was the hot-weather alternative to wool. But in some places in certain periods, garments were just made from lighter wool for the summer and linen was restricted to body garments. So be careful. You’re going to fall in love with linen, but don’t use it where it’s not appropriate.

The Care and Feeding of Linen

Before you do anything with your linen, make sure you wash it. All fabrics shrink to a certain extent, and it is best if they shrink BEFORE you cut out your garment. This will also remove any shelf dust and commercial finishing from the factory that can irritate the skin. You can hand wash the fabric if you want, but I throw mine right in the washing machine on a normal (not delicate) setting. Turn the water on hot (remember, you want it to shrink) and toss your fabric in. Just wash it with normal laundry detergent and skip the fabric softener. Send the fabric through the dryer for extra shrinkage potential.

Linen is a very hearty fiber. It’s made from the stalk of a plant that is nearly three feet tall. Unlike cotton and wool that have fibers ranging from 1" to 6" in length, linen is really a giant. The longer the fibre, the studier the fabric. You won’t harm it by laundering it roughly. It doesn’t need to be babied. Matter of fact, the harder you are on your linen, the softer it will be to you!

Take your linen out of the dryer as soon as it’s dry or leave it a little damp. Hang it up IMMEDIATELY! Possibly the only drawback with linen is that it wrinkles terribly and that lovely crispness will turn into creases and ridges if you’re not diligent. However, quick removal from the dryer is about all you need to keep the linen relatively wrinkle-free.

Before you cut your garments, you’ll want to straighten the grain. Lay the linen on your cutting table and look carefully at the grain. Do the threads intersect at right angles? If so, your grain is straight. But sometimes in the laundering process, the grain gets bunched up and crooked. To correct this, get out your ironing board and iron. Spray the linen lightly with water and iron it on the highest setting. Keep the iron moving and pull the grain straight with your free hand as you go back and forth with the iron. This should fix the grain and make your linen straight again. Now spread it out on your cutting table and start on your masterpiece.

Wear it in Good Health!

Other posts by Kass McGann