It is possible to glimpse life in a medieval linen drapers shop thanks to an illuminated manuscript the Tacuinum of Vienna. Tacuinum Sanitatis were medieval medical books devoted to health and sanitation. Five unique copies of these manuscripts survive in different cities from which they take their names.. They were written in Latin which had been translated from the original Arabic. The term Tacuinum comes from Taqwin al-Siha meaning Tables of Health, a work originally by Ibn Butlan of Baghdad. The tables concerned themselves with six main subjects – air, food and drink, movement and rest, sleep, the evacuation of waste and balancing the emotions or humors. The combination of these was said to provide a healthy life. 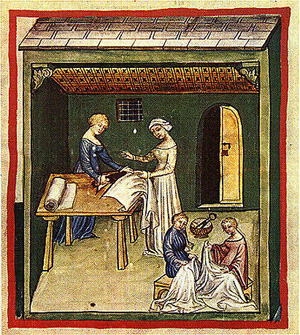 The Tacuinum of Vienna was created in the late 14th or early 15th century in the Po Valley of Italy. The illuminated manuscript is illustrated with dozens of fine original drawings and watercolors. Much of the volume is devoted to the properties of foodstuffs from rye and spelt to watermelons and pasta. However there are also illustrations of flowers, the seasons and woolen and linen clothing. The depiction of linen clothing (vestis linea) is accompanied by a description of its medical properties, as understood by the medieval author.

According to the text the nature of linen is cold and dry in the second degree. Optimum is the light, splendid beautiful kind. Its usefulness is that it moderates the heat of the body. Its danger is that it presses down on the skin and blocks transpiration. However according to the writer the danger can be neutralized by mixing the linen with silk. Effects of linen clothing are to dry up ulcerations. The Tacuinum considered people to have different temperaments or humors. According to this linen was best for those with hot temperaments as well as for the young. It is best used in summer and in southern regions.

The fine illuminated drawing which accompanies the description appears to show a medieval linen drapers or a tailors shop. The view is front on and shows a typical, everyday scene which interestingly features four women. Two women are seated in the foreground with linen draped over their knees. Perhaps they are making up linen garments. In the background a women purchases linen at a table from another woman who appears to measure the material out. A fine roll of linen also sits in the table. The purchaser wears a creamy white dress or kirtle which appears to be of linen with a linen cap while the seller has a dress of deep blue. The women in the foreground wear tunics of deep blue and pale red or pink, with one being in a fitted style while the other is looser.

The picture gives a fascinating vignette of what a late medieval Italian linen shop looked like as well as the style of clothing that the women wore and typical colors of clothes at this time. The linen is a natural grayish-white rather than the brilliant white which may often be found in modern linen. Many of the other illustrations in the Tacuinum depict men and women in the attire of their period including linen shirts and aprons as well as linen dresses and caps. Clothes are depicted in white, saffron, azure blue and pale and deep reds.

Other posts by Lynnen MacNab Conner