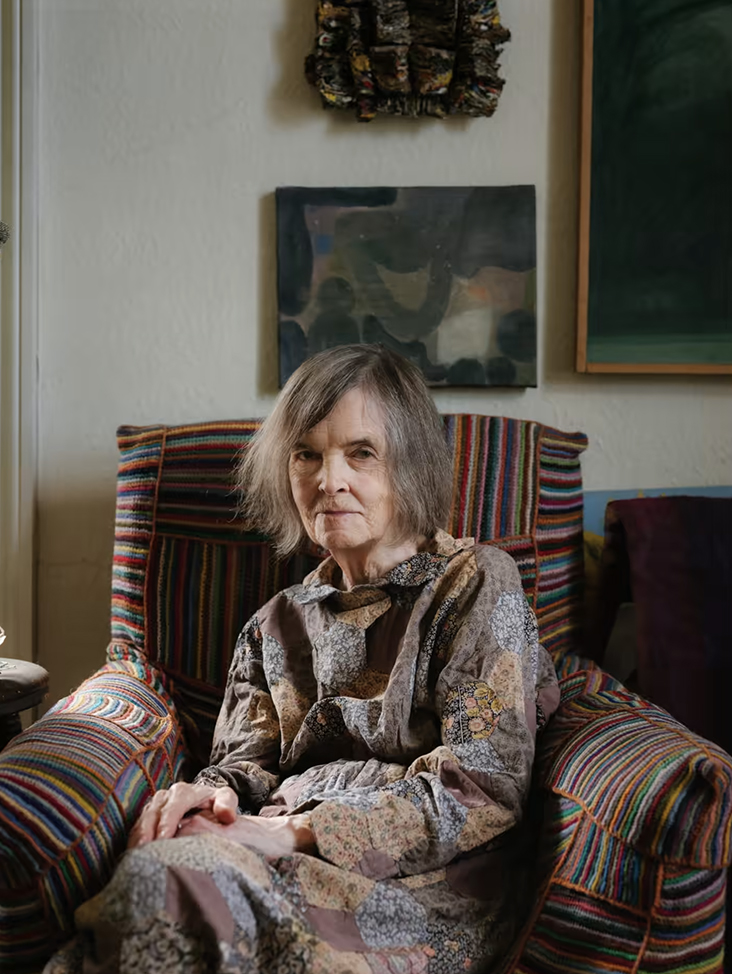 Since the late 1970s, British artist Rachel Scott has found remarkable ways of merging art and life into one. A weaver, sewer, mender and patchwork-maker, her legacy of creating is closely intertwined into her family life, as a mother to two now grown-up daughters, and the wife of the abstract expressionist painter Frank Bowling. Endlessly resourceful, she builds patchwork garments from decades-old clothing fragments, and weaves the most luxurious clothing, rugs, furniture covers and more by hand from British-sourced, undyed wool that she then spreads out across her family home in Pimlico, London. It seems fitting that the first weaving project Scott took on in 1976, to weave a new rug for their staircase, is still going strong today, running through the very centre of their home. Her uncanny ability to make the necessities of family life into a creative practice is currently the subject of a major retrospective at Make Hauser & Wirth titled Weaving My World. 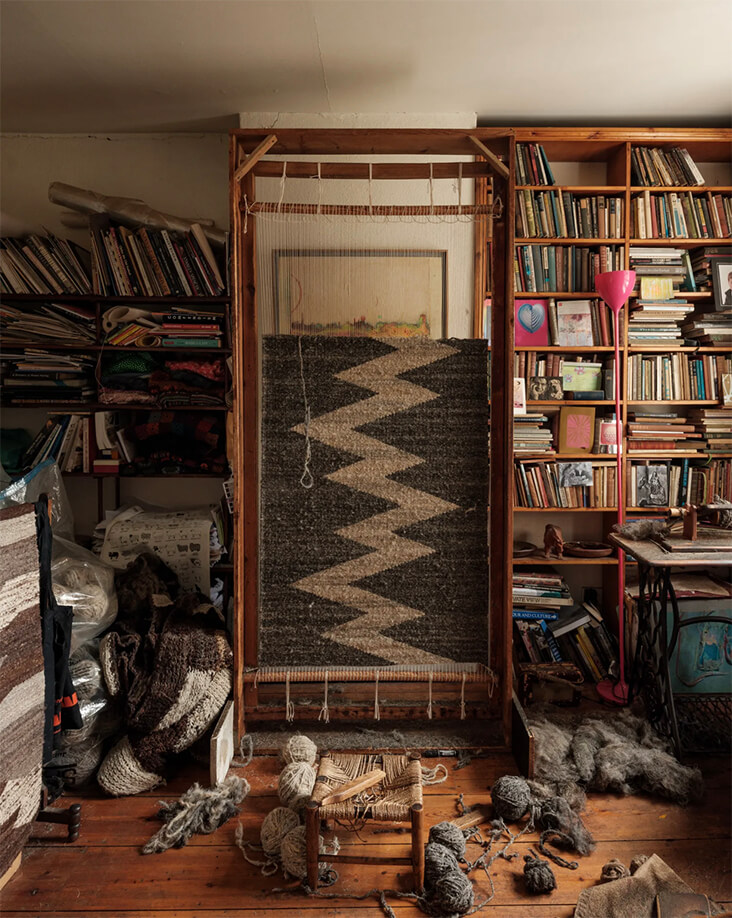 Scott grew up in the British countryside between Somerset, Dorset and Hampshire, and her creative childhood laid the foundations for a life of making. Scott remembered back, “My mother was a pianist and she made portraits of my friends’ ponies, really carefully and beautifully in oils. She always gave me things like pipe cleaners for making little animals with and encouraged me to draw and paint.”

Scott tried her hand at knitting when she was still a child, fashioning sweaters for her brother and father that never seemed to fit quite right. Instead, she developed a patchwork technique of making garments from knitted squares, which she realised gave her endless freedom for adapting and amending. Years later, she adopted similar patchwork techniques in order to make clothing for herself and her two growing daughters. She says, “Making things by hand for me is the only way and has been since I was a child.” 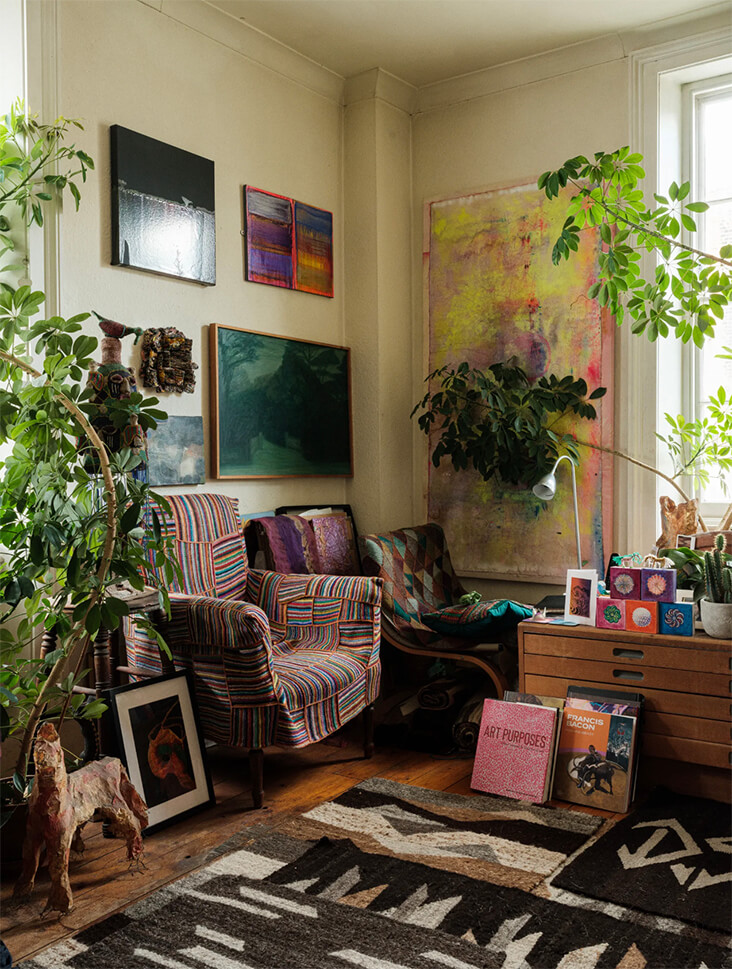 A view of Rachel Scott’s living room in her London home in Pimlico, featuring her paintings, woven rugs and furniture covers

From 1959-1964 Scott trained as a painter at London’s Royal College of Art, and found success following graduation as an elected member of the London Group. Her paintings evolved from dark, earth toned and monochrome interiors into green landscapes, but in 1979 she quit painting. Some years earlier, in 1976 Scott had begun making weavings on a spinning wheel made by her brother with a bobbin screwed to a Singer sewing machine base. By now she was a mother, and weaving just seemed more suited to the practical demands of daily life, as she noted, “Painters tend to have all their paintings stacked up. Rugs seem so much more sensible, because you can pile them up and sit on them.” 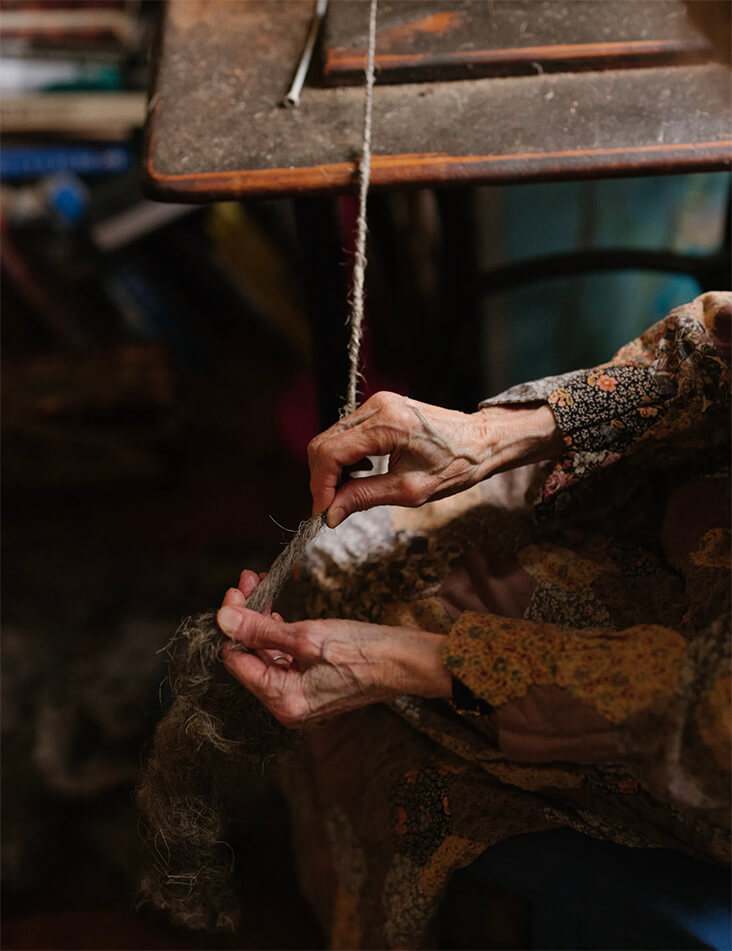 Some years later Scott’s husband fashioned her a Navajo-style loom inspired by an exhibition they went to see together on Native American tribes at London’s ICA. Much like Anni Albers, Scott was immediately struck by the beauty of Native American weaving. Their tradition for making bold, striking, geometric designs continue to shape the style of Scott’s weavings today. She has a home studio on the top floor of their Pimlico home, from where she makes weavings in the daylight hours, and spins yarns in the evenings. The yarns she works with are sourced from British farmers in Devon, Buckinghamshire, Cheshire, and she always chooses undyed wool, allowing the natural dark, muted colours to shine through and age slowly and beautifully over time. 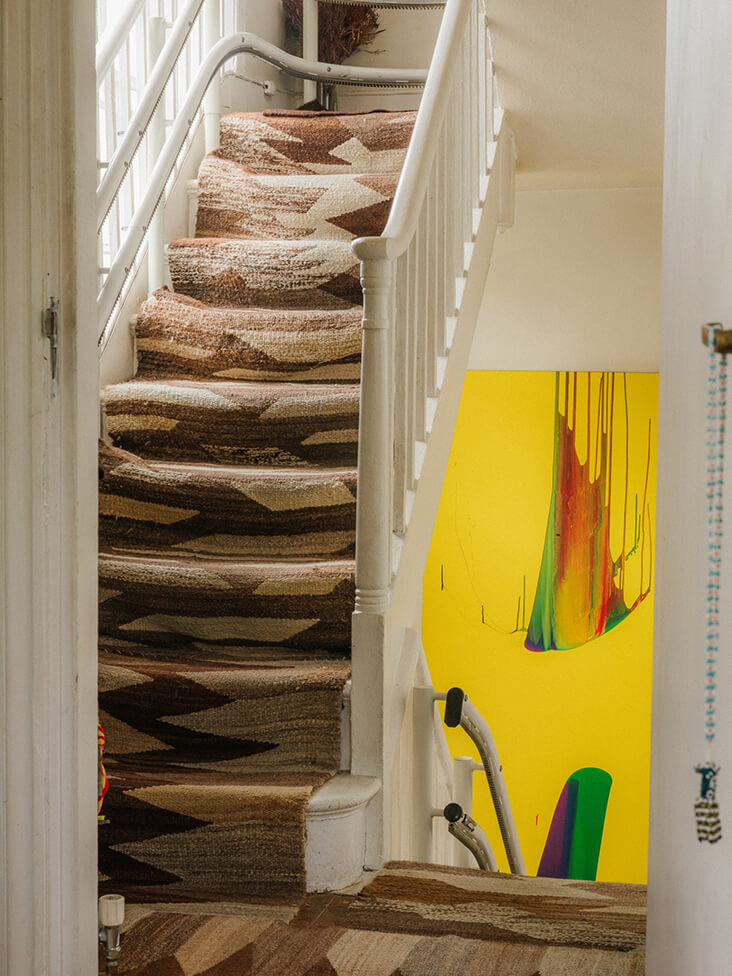 The woven staircase rugs Rachel Scott made for her London home

Patchwork is another important strand of Scott’s practice that has evolved out of family necessity. Scott says the practice came about when she was a homemaker on a limited budget with two young daughters at home. She says, “I was making children’s clothes, and when they had grown out of them, I used to tear them into strips along with old sheets, nappies and goodness-knows-what and make braided rugs, which are very useful and hard-wearing.” This endlessly recyclable process of reusing rather than throwing away means Scott hasn’t bought herself any new clothes in decades, saving her a small fortune. She adds that patchwork techniques mean she need only mend something with a new patch when it wears out, rather than replacing the whole item. Scott marvels at the practical, cyclical economy of this practice, observing: “The thing about patchwork is that if you spill something on it or get paint on it, you can just take out those patches and put new ones in.”

Yet Scott’s hands have always been busy, and she shows no sign of slowing down any time soon. Instead, from her quiet home studio she remains endlessly prolific, methodically creating objects that are as striking as they are durable and useful. Making is now an integral aspect of who she is, as her multi-layered objects speak of family history, and a devotion to the slow crafts. “What else,” she says “would I do with my time?”