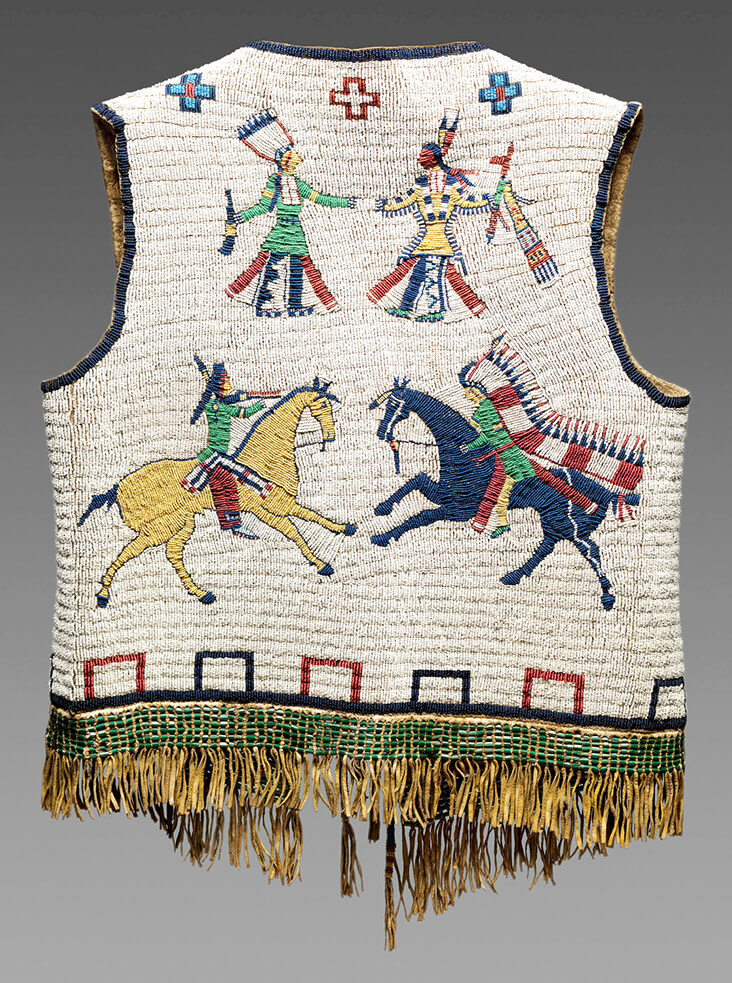 A Native American man’s vest, probably by Oglala Lakota (Teton Sioux) artists, ca 1890 “A male artist drew the images of battles with Crow warriors as well as those of peace talks, and a female artist beaded directly over the drawings.”

The journey of embroidery in the United States is long and complex, with many twists and turns along the way. It begins with the ancient cultures of Native America, and travels through the 17th century New World, flourishing in the American colonies and remaining a popular pastime in the later cities that emerged. Because of this incredibly varied and diverse history, there is no one defining style of American embroidery – instead, it is as rich and diverse as America itself, forming a vital strand of its cultural history. 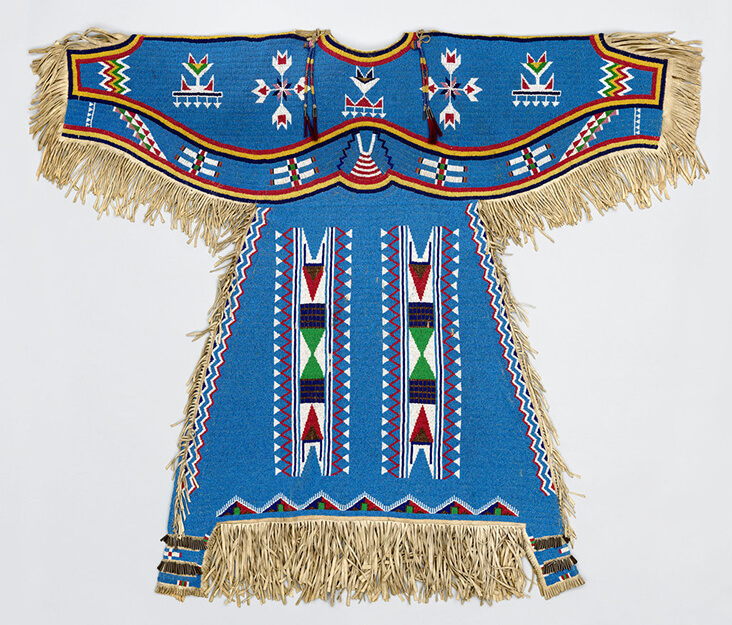 A Native Amerian dress of leather, glass, brass and steel-cut beads, metal cones and horsehair, from around 1900

“Native history and American history are inseparable,” reads projected text on the wall of The Metropolitan Museum of Art’s American Wing. “It is a rich history, as inspiring as it is terrible, and it belongs to all of us.” The embroidery of Native America can be traced back many centuries, and its history is closely bound to the natural world. Canny and resourceful, early Americans made creative use of the materials they had to hand, including animal skins, guts, shells, feathers, fur and fringing, evolving a highly distinctive language. They adorned decorative detailing not just onto clothing, but also onto shoes, bags and wall hangings, believing these details had symbolic meanings, such as protecting people from harm. 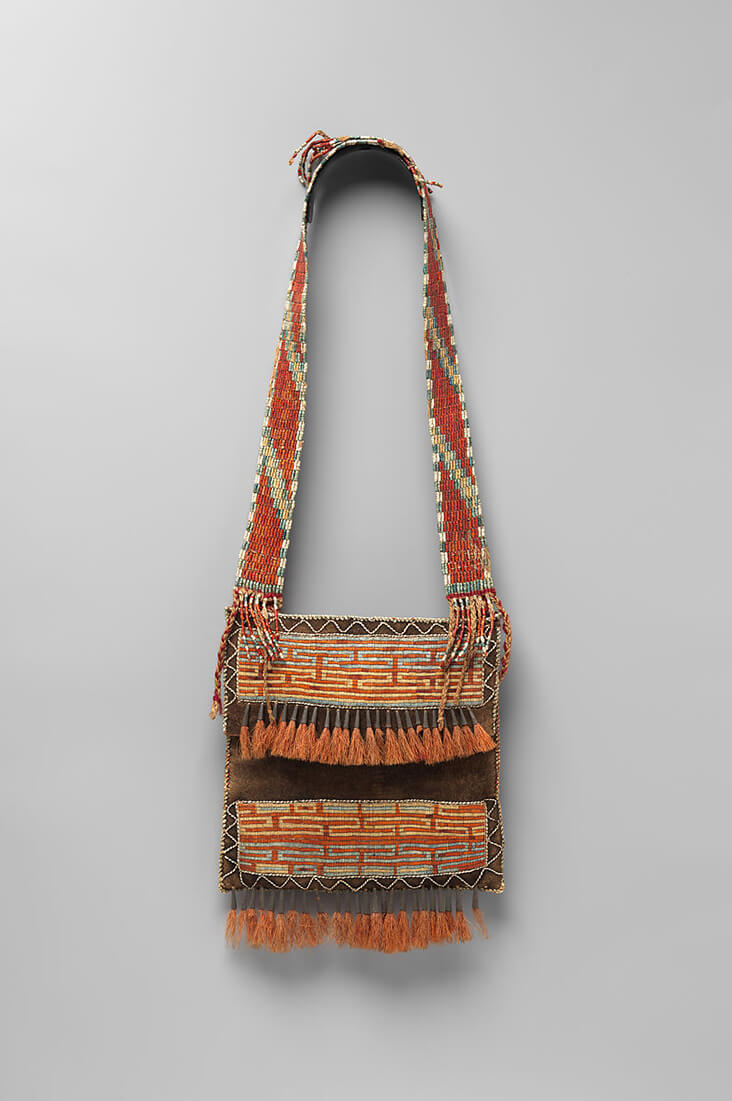 A Native American shoulder bag, Anishinaabe, probably Ojibwa, made in the United States or Canada, 1780

Quillwork and featherwork are two of the most popular techniques of early America, particularly among North American tribes. The techniques involved dyeing feathers and porcupine quills with natural colours from berries, flowers, plants, roots and tree barks, before being attached to soft leather with animal sinew or soft threads. Their intricate quillwork features intense shades of red, white and blue arranged into dazzlingly complex designs. Eastern woodland designs are often floral, while those of the Plains lean towards geometry. When European settlers arrived in America, and trade brought an influx of new materials, many native Americans began embroidering instead with glass beads, stitched into patterns resembling the movements of nature, such as flashes of lightning, ripples of water, clouds and stars. 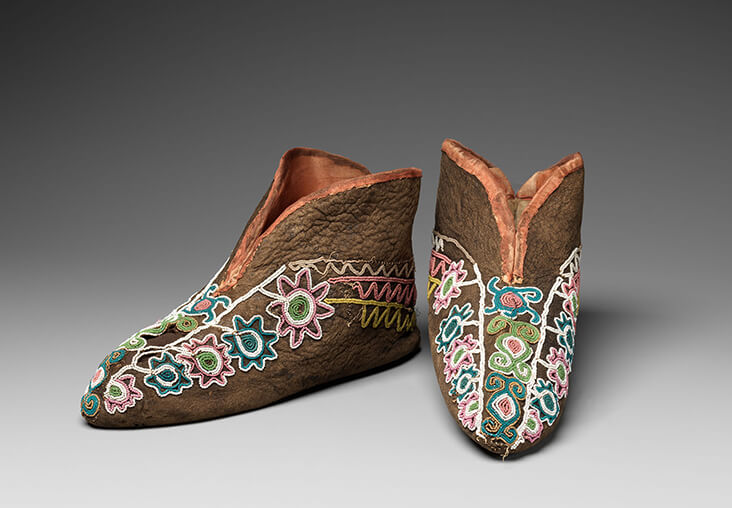 Moccasins, Muscogee/ Creek, Native American, ca. 1830 “…embroidered with tiny trade beads strung on a cotton thread with a stiffened tip and then secured to the hide with a needle and thread. “

When European Pilgrims first settled in the American colonies, they brought with them needlework techniques from their own culture, and these gradually evolved to form a new kind of American embroidery. Crewel embroidery in rich, floral patterns was a recurring style, one that persisted throughout the American colonies, colouring household linens and clothing with the patterns of their past. As small settlements became industrious farming towns, wool, linen and flax production allowed for a greater range of fabrics and embroidery threads to be made.

Much like the native Americans, many prairie households made natural dyes from plants and flowers. Indigo became the most popular and widespread, a colour which many households would produce and dye onto threads themselves. The dark midnight blue threads that could be made from indigo dye made quite the impact when stitched in elegant floral motifs on white linen backdrops, leading to a widespread fashion for what became known as “blue and white” designs. 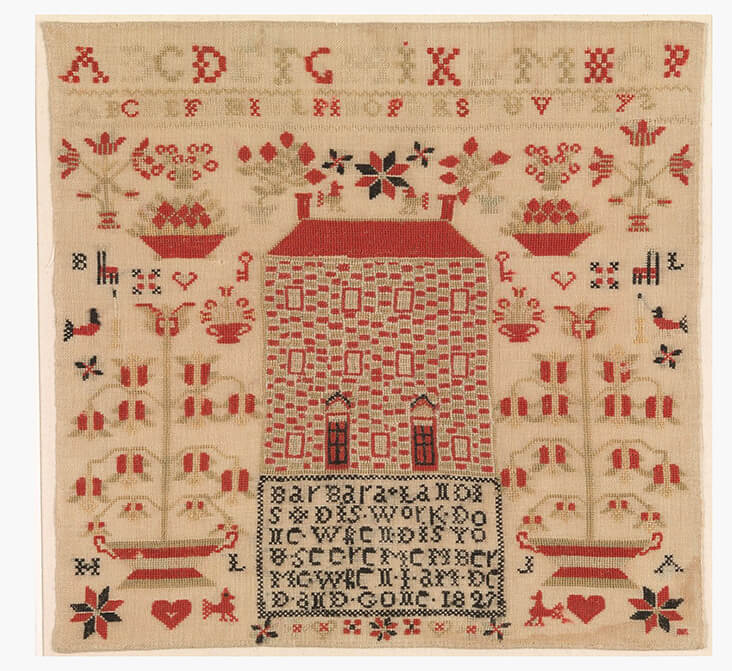 Influences for “blue and white” came from various sources made available through transatlantic trade, including the striking, high contrast imagery of Canton china, and the rich florals of India chintz. But blue and white together also came to symbolize something about the rustic purity of life in the American colonies, encapsulating their taste for clean simplicity. Recurring motifs were derived from nature, such as scattered flowers, thorned roses and long, curved lines, while over and over stitching gradually came to replace crewel. Quilting and rug-making were also vital components amongst prairie households, a means of survival as much as artistic expression, and embroidery was a decorative element woven into their framework.

Women were the ones who made all the household embroideries, and they passed their skills down to their daughters in various ways. One of the most celebrated techniques was the practice of creating samplers, small sewn panels that allowed youngsters to learn how to sew by following a template. Early examples of samples from the 1700s featured alphabets and numbers, but by the late 1700s and early 1800s designs had become much more complex, particularly among affluent households, adorned with decorative flowers, houses and pastoral scenes. These stitched panels often became family showpieces, hung on the walls to demonstrate a young woman’s talent and social status to the wider world. 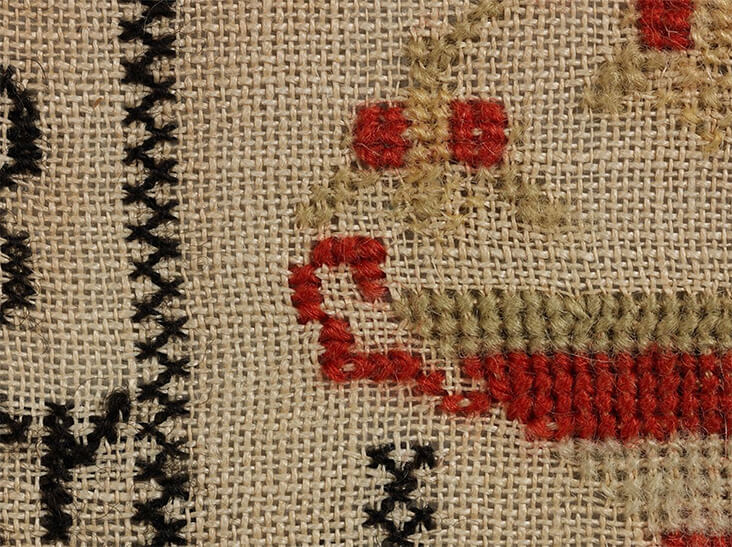 Embroidery throughout the 18th and 19th centuries evolved significantly across the United States, as styles of lace from France and Spain infiltrated their languages. Berlin woolwork was also widespread on furniture upholstery and rugs, featuring various motifs including animals and flowers. In the later 19th century United States industrial methods of production took over, but embroidery experienced a resurgence with the rise of the Arts and Crafts movement in the early 20th century. Since then, embroidery has remained a much-desired decorative feature across widely divergent creative fields in the United States.

Most recently, a school of designers engaged in “indigenous activism” are emerging, who believe the linguistic complexities of their Native American cultures should be brought out into the open and fully explained, rather than being generalised or homogenised. These contemporary designers include Bethany Yellowtail, Keri Ataumbi and Louise Solomon, who are reinventing American history’s deep rooted design codes for a new generation.