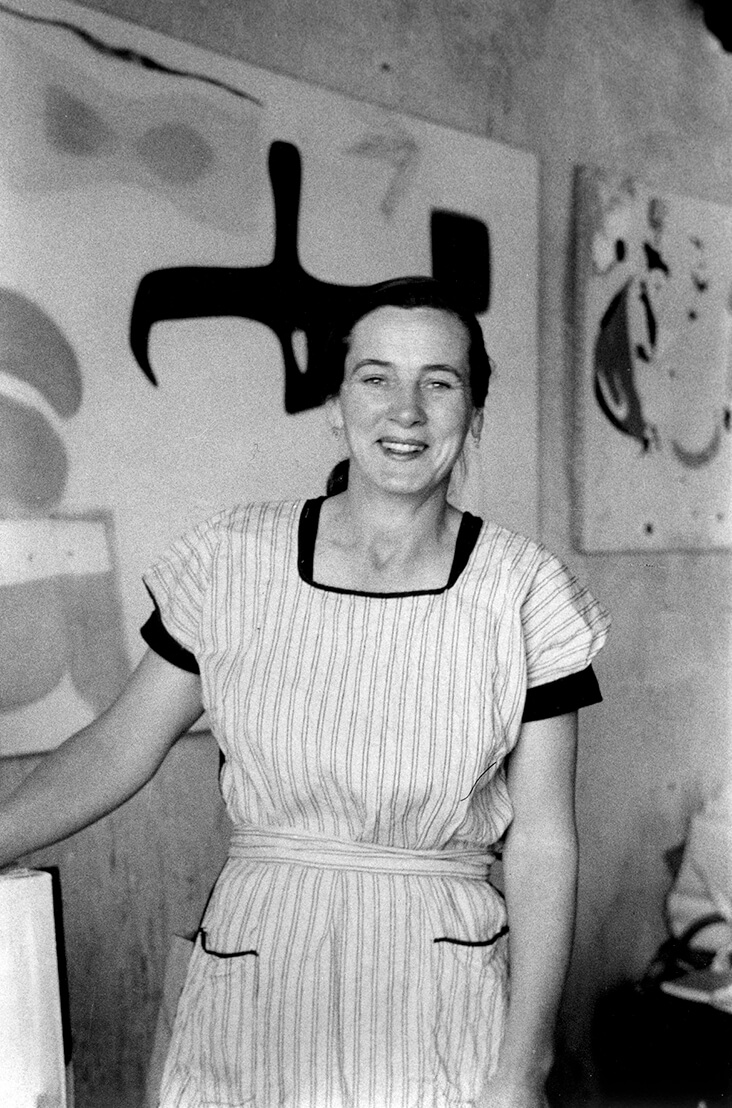 Pioneering American Minimalist Agnes Martin is world-renowned for her vast, meditative canvases, with broad planes of luminous colour and trembling, hand-drawn lines. Primarily a painter with a capital ‘P’, and with little interest in fashion, she might seem an unlikely figure to associate with fabric and textiles. Yet closer examination of her practice, and indeed her life, reveals how various textile references over the years came to inform not only the compositional structure of her art, but also its deeper meditative meaning.

Martin grew up in the Saskatchewan plains of Canada in the early 20th century, later relocating to Vancouver. Her childhood in the vast Canadian wilderness was marked by periods of real solitude, and this came to inform the artist’s later need for isolation and calm. After attending formal art training in Washington, New York and New Mexico, Martin eventually settled in the run-down, bohemian Coenties Slip artists community in New York in the 1950s. It was a significant turning point for the artist as she began experimenting with bolder new languages of expression in two and three dimensions. 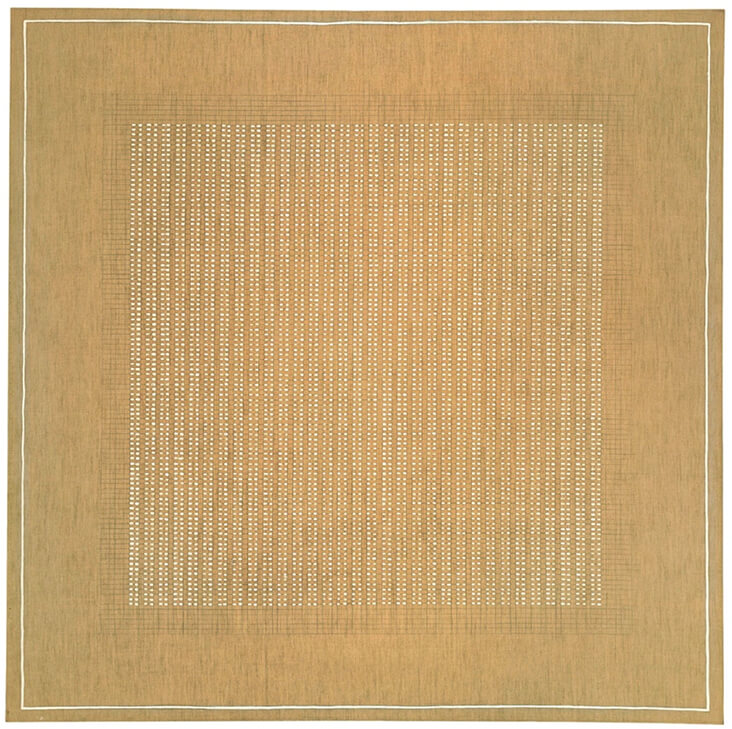 One of the artist’s closest friends within the community was the textile and fibre artist Lenore Tawney, and the two came to have a profound influence on one another’s practice. Tawney’s weavings were made using loosely knitted repeat grid patterns on a hand-loom, and their dense patterning came to inform the nature of Martin’s art. From the 1960s we see Martin increasingly focussed on the same kind of careful, tightly structured grids that one would use in the warp, weft and weave of creating fabric. Martin made these gridded patterns onto canvas or linen backdrops, and it is almost as if she is teasing out the very structure and pattern of the fabric beneath them, and drawing our attention to its tactile, material properties. Martin also explored how these structured designs, with their calm, repetitive motifs, could convey her interest in Taoist and Buddhist philosophies. 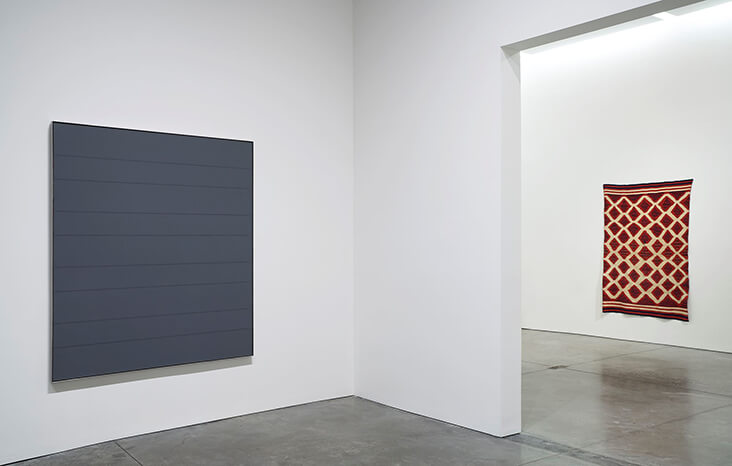 In 1967, following battles with her mental health, Martin made a dramatic departure from New York, disappearing into the New Mexico wilderness with nothing but a pick-up truck. She quit painting for several years, instead focussing on building herself a simple adobe hut from scratch to live in. Although she wasn’t making art, the grid was still there in Martin’s building ventures, with its forms of pattern, repetition and structure. When she did return to making art again, her work was sparser and more retrained, featuring pale, light-infused colours in broad bands and stripes, reflecting the vast, sublime wilderness of New Mexico as the artist knew it inside her head, rather than from direct observation. She noted, “My paintings are not about what is seen. They are about what is known forever in the mind.” 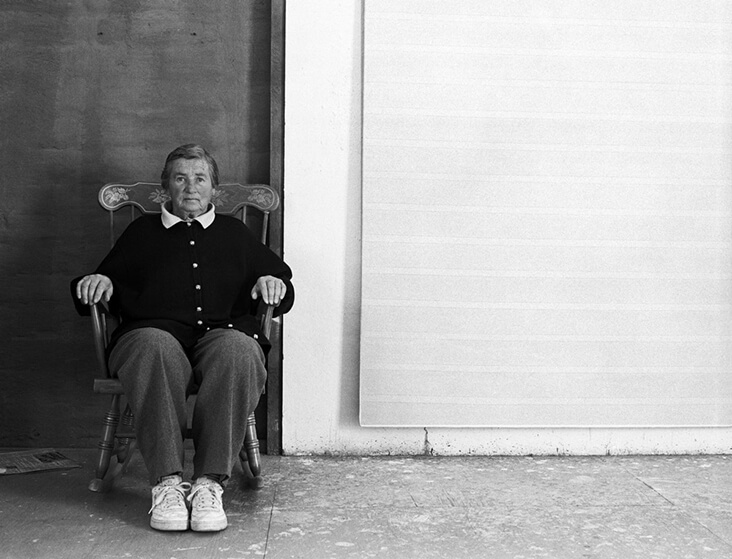 Comparisons have been made between Martin’s later, New Mexico art and the patterns of indigenous Navajo blankets that were being made in the communities around where she came to settle. In 2018, Pace Gallery in New York organised a rich and considered display featuring traditional New Mexican Navajo blankets hung alongside Agnes Martin’s paintings, demonstrating just how visually and conceptually similar they were. Although Martin never talked about the link between these blankets and her own practice, the relationship is clear to see. Both focussed on harmonious, geometric shapes and patterns in bold, simple designs, and the spiritual, meditative properties of colours. And both Martin and the blanket makers would have been out there in the New Mexico landscape creating these incredible works of art, while absorbing influences from the sublime landscape all around them. Marc Glimcher, Pace Gallery President and CEO said of the exhibition: “Here are two prime examples of how meditations on perfection and balance can inspire society at large and be impactful forces for introspection and transcendence.”

When I first saw a photo of this EXTREMELY fluffy tee it was love at first sight. And THEN I saw its name. Vienna Tee, I mean come on – what more do I have to say? I love my hometown and I love fluffy things. So… the next day I happened to find myself…