How FS Weaves Authenticity Into Films

Aline Willemin, producer of the 1560s-set independent film Albert and Claude, knew the production would have to be smart with money. But she also knew it needed absolutely authentic clothes. She found them thanks to fabrics-store.com, a Los Angeles-based company as passionate about fabric as Willemin is about film.

Albert and Claude is a psychological thriller that follows Claude, part of a persecuted French religious sect that has recently arrived in the New World. When he’s abandoned by the other settlers, he searches for the Fountain of Youth with the sect’s leader, Albert — a man Claude has killed. The actors face the challenges of embodying new arrivals in a strange land hundreds of years ago. Willemin wanted to make sure they didn’t also need to worry about their clothes feeling uncomfortable or false.

“This is the first time that we ever hand-crafted something and it’s atypical,” said Willemin, whose husband Alex Willemin wrote and directed the film. “But what they’re wearing says so much about them, who they are, and where they are in life and in society.” She added: “We worked really hard to find a source that would get us nice, high-quality linen, like what you might have in the 1560s. It needed to be workable, and true to the period.”

Oksana Karpushin, a member of the FS team, loves how linen can connect people across hundreds of years. “We just don’t mess with what nature built,” she said. “It’s been found in pharaoh’s tombs, and traveled with human culture through Europe and the Americas.” She added: “I believe it’s an internal component knowing that what you have has belonged in human history, and is interwoven into the fibers of your cultures.”

Fabrics-store.com, founded in 1998, has an office in West Hollywood and a warehouse in Downtown Los Angeles, and works with far-away productions like the Jacksonville, Florida-based Albert and Claude on everything from sewing help to fabric questions to wholesale supplies. It offers curated selections and detailed attention at a time when many fast-fashion chains place more emphasis on trendiness than a customer’s specific needs. As FS notes on its website, “Our linen is nothing short of addicting.”

At its core, there is an understanding that seeing and touching certain fabrics can be as transportive as specific tastes and smells. “It’s like a food that can pinpoint a precise place and time,” said Karpushin. “Because it’s a tactile product, it has the capacity to, kind of, space travel, for lack of a fancier way to say it.” 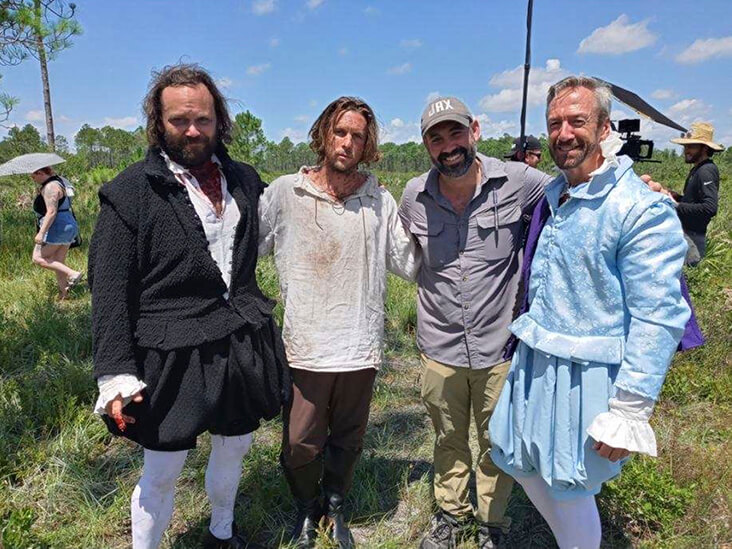 FS worked closely with Willemin to determine the production’s needs, and make sure the costumes were as realistic and unfussy as possible. “We kept it really old school and because of that, the fabrics retained their function,” she said. “You’re not smoldering hot in it, you can wash it at home, and it doesn’t require dry-cleaning because obviously, Versailles didn’t have dry-cleaning.”

It’s rare for such an independent, tightly budgeted project to have such period-accurate costumes, and Alina was thrilled with the boost fabrics-store.com brought to the overall feel of the story. “This was my first experience as a producer, having specific costumes created,” Willemin said. “It’s something I would absolutely do again.”

Other posts by Masha Karpushina

In my last article, I asked you if you would be interested in some pattern recommendations for kids wear – and as I know timing is key, I did that the- day- before the photo shoot for today’s post! So guess who had a relaxing evening while E. was sleeping…? Not me. No, I’m just…