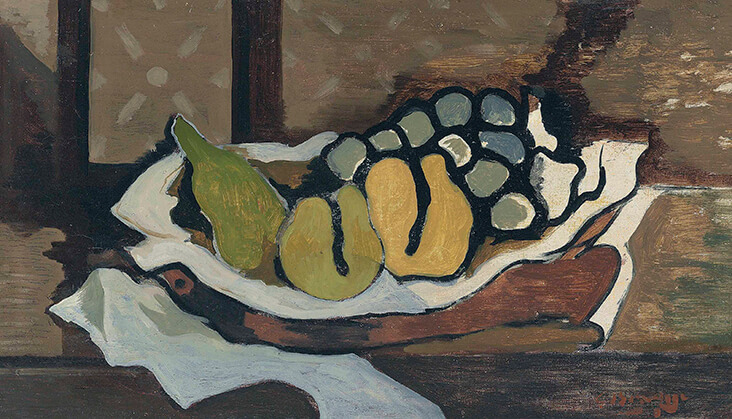 Cubist painter Georges Braque celebrated the ambient power of warm, naturalistic colours throughout his career, bringing rich and appealing earthy tones like LODEN GREEN into many of his most famous paintings. A pioneering French Cubist alongside Pablo Picasso, Braque’s limited hues initially gave him room to focus on wildly experimental designs without letting bright colours distract his attention. But over time these colours became his trademark style, and he really relished in their harmonious, atmospheric possibilities. Greens nestled in amongst shades of brown, grey and black became radiant warmth, conveying fresh shoots of new plant life, ripe fruits or shafts of sunlight streaming through open windows. 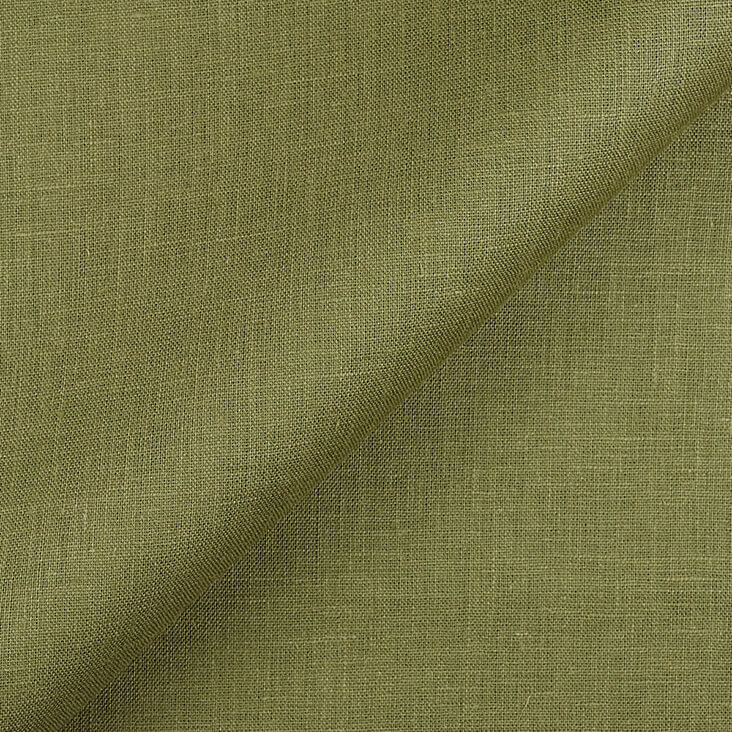 Braque was born in the small community of Argenteuil, France in 1882. His family owned a house painting firm and both Braque’s father and grandfather worked as amateur artists, which may well have influenced Braque’s later decision to become an artist himself. When Braque was 8, his family moved to Le Havre, and it was here that Braque first began taking art evening classes at the Le Havre Academy of Fine Arts at the age of 15. When Braque was 17, he trained as a house painter and interior designer, with a view to continuing in the family trade, but by 1902 he had realised his deeper desire to become an artist. After studying at the Parisian Ecole des Beaux Arts, Braque set out to become a painter in early 20th century Paris. 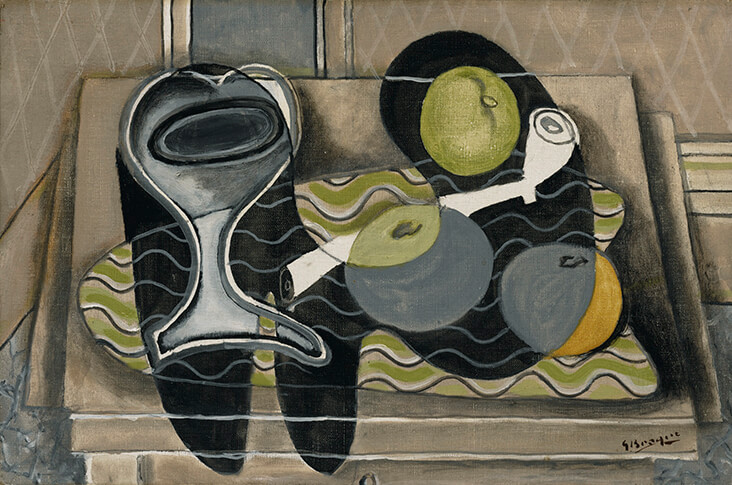 Braque cycled through various styles in his early career, picking up influences from Paul Cezanne’s Post-Impressionist structuralism, and the expressive painterliness of Fauvism.  But it was the friendship he struck up with Picasso in around 1907 that would have the most profound impact. Working side-by-side, the pair spearheaded the Cubist movement, envisioning shattered forms and splintered designs that challenged pictorial conventions and ushered in a new way of seeing the world. Still life and landscape were his favoured subjects, simple, traditional themes transformed entirely with his radical and subversive eye.

By the 1920s, Braque had earned international stature as a leading figure in the radical School of Paris. By the time he painted the brooding Fruits dans un plat, 1924, Braque had settled in a new studio in the Parisian district of Montparnasse. The ambient glow of this painting seems to reflect Braque’s growing contentment in life, with rich, syrupy browns in the background cradling ripe fruit in golden shades of green and yellow. 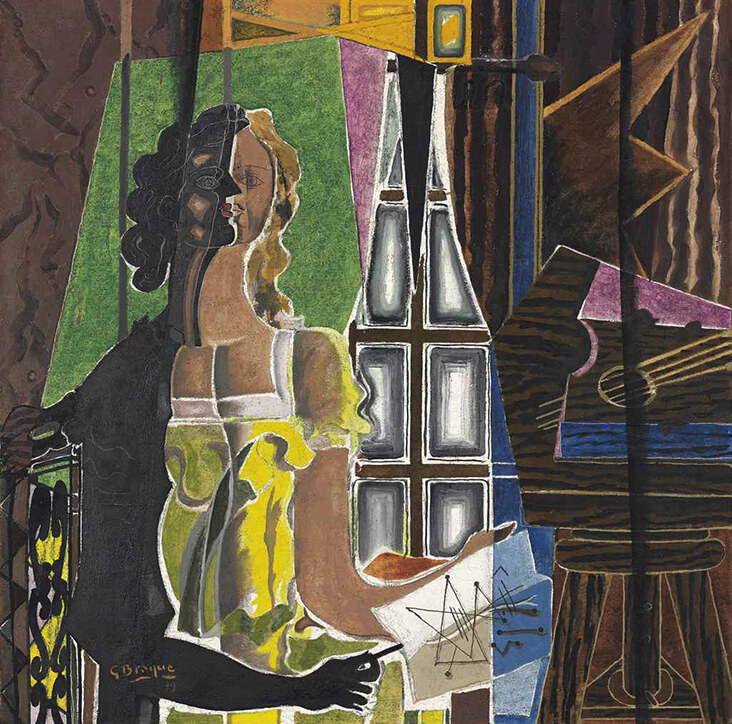 Braque bought a house on the stylish Parisian Left Bank in 1928, and in 1930 he acquired a second home, a country cottage on the Normandy coast. His paintings from this period became increasingly stylised and playful, incorporating areas of flat pattern and decoration with his trademark geometric compositions. Nature morte à la pipe (Nappe rayée), 1932 combines muted shades of beige, grey, black and white with sharp passages of ripe green, which sing out with warmth and radiance in this quiet interior. In Le Modèle, 1939, Braque brings a female model into his still interior, while allusions to musical instruments and sheet music appear around her. Braque’s favourite earthy green emerges from her torso and legs, suggesting a warm shaft of sunlight coming from the window in the centre of the scene. 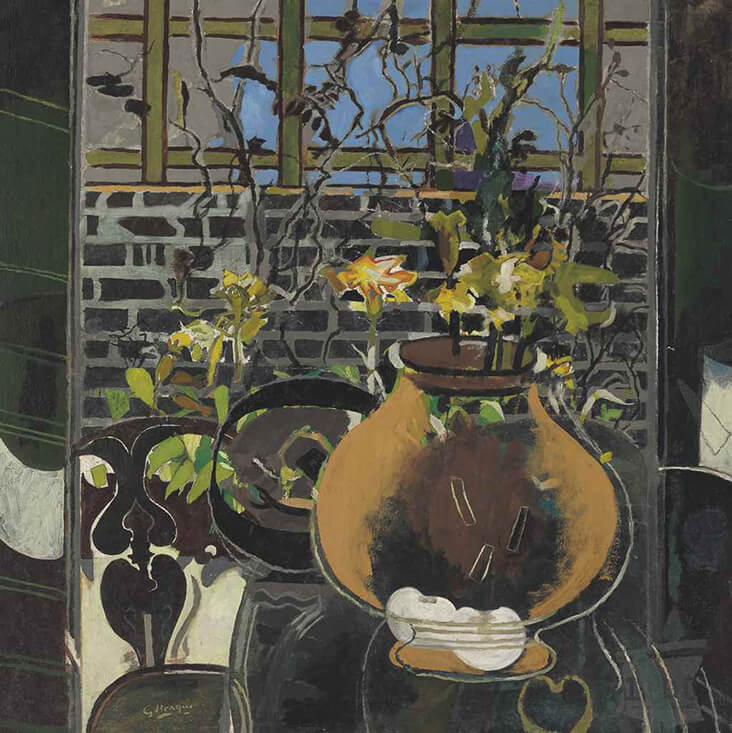 The later painting La Treille, 1953-4 is the view through an interior space into an outdoor garden beyond. Table, walls and chairs seem to overlap one another in a complex myriad of creative possibilities, subtly transmuting through various shades of beige and grey. Much like many of his earlier paintings, a natural, warm green is the defining feature here, forming flame-like sparks of life across the central plant’s curling leaves. In Braque’s hands they seem to flicker in and out of the sunlight, enticing us outwards into the garden beyond.