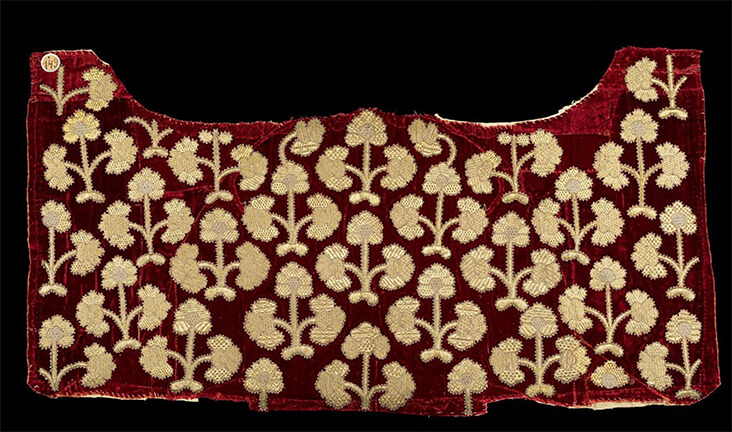 Russia, as we now know it, has a long and complex history of embroidery, one going back many hundreds of years. From the gold thread vestments of medieval clergy to the colourful and intricately illustrated clothing of indigenous cultures, Russian embroidery has much to tell us about the nation through the centuries. Far more than just decoration, embroidery is a treasured language that is bound into the core of Russia’s heritage. It can tell us amazing stories about the people of the past, and it’s a fascinating history that continues to influence the makers of today.

Some of the earliest examples of Russian embroidery have been dated back to as early as the 10th century, adorning clothing with gold and silver threads – these threads were made by wrapping gold foils around a silk core. Because of the time and cost involved in making these adorned garments, they were reserved for aristocratic members of society, and many examples of embroidered garments have been discovered in the burial grounds of royalty. Throughout the medieval era, gold threads were also a vital component of the Russian Orthodox church, stitched intricately into the vestments of clergy to give these spiritual leaders an otherworldly aura. Patterns from this era often featured floral motifs and fairy-tale creatures, bound with tight, dense stitches by immensely skilled craftspeople (usually nobility or monks). They produced elaborate and indulgent designs that truly transformed fabrics. Examples of these early and medieval garments are a much-prized aspect of Russia’s history, held in many museum collections around the world. 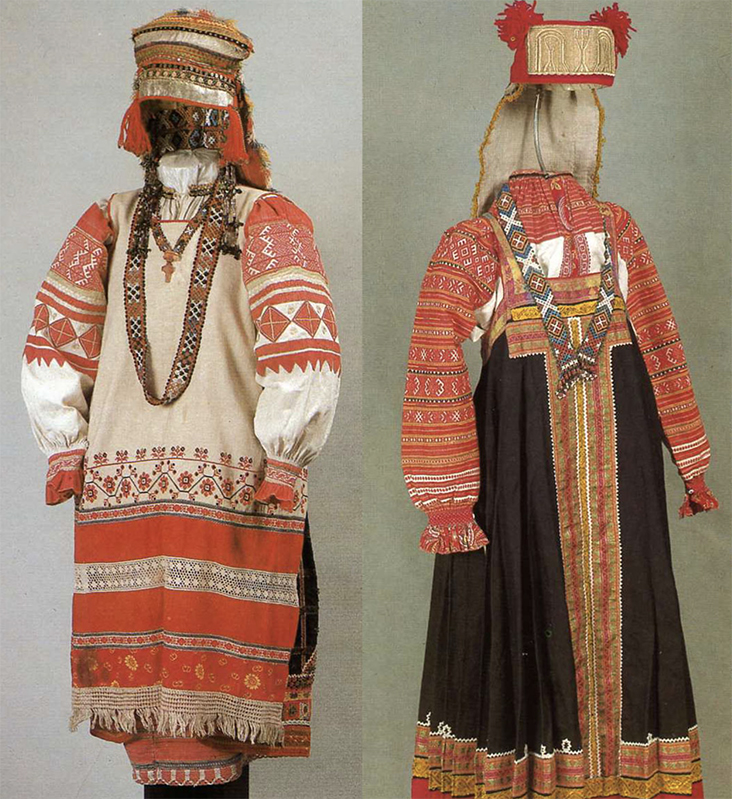 From the 15th century onwards, embroidery in Russian areas moved from a highly skilled niche to a vital aspect of everyday society. Girls were taught sewing skills from a very young age, and they used these skills to decorate not just clothing, but also tablecloths, wall-hangings, trimmings and towels. Stitching was often made in bright red, a colour symbolising the nurturing warmth of the sun and the pulsing energy of blood, while Nabor was the most popular technique, sewing stitches of different lengths along the weft of a cloth, forming parallel rows. This resulted in the angled, geometric designs we might associate today with Russian folk weaving and embroidery. Such embroidered items not only demonstrated their skills to other families, they also marked social standing, and often became part of a woman’s dowry when she got married. They became valuable family treasures that were shared through the generations; that so many of these garments still survive today is testament to the skill in their making. 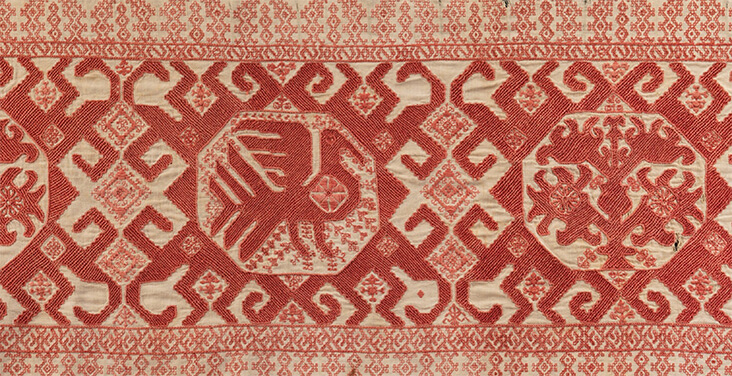 Because embroidery was such a widespread practice across Russia, differing regions and districts developed their own embroidery devices, motifs and colour schemes, and these were passed down through the years. Areas with their own distinct approaches are vast and diverse, but historically they have been divided loosely into two camps – Central and Northern Russia. Embroidery of Northern Russia features predominantly geometric designs, usually in vivid red stitching. Popular stitches in Northern areas were backstitch and Holbein stitch, while one of their most recurring motifs was that of the horse and rider, an emblem that linked Russians back to their links with Scandinavia. The Sun Chariot was also prevalent – Russian people saw the sun as the giver of all life, so this was a powerful and enduring symbol. 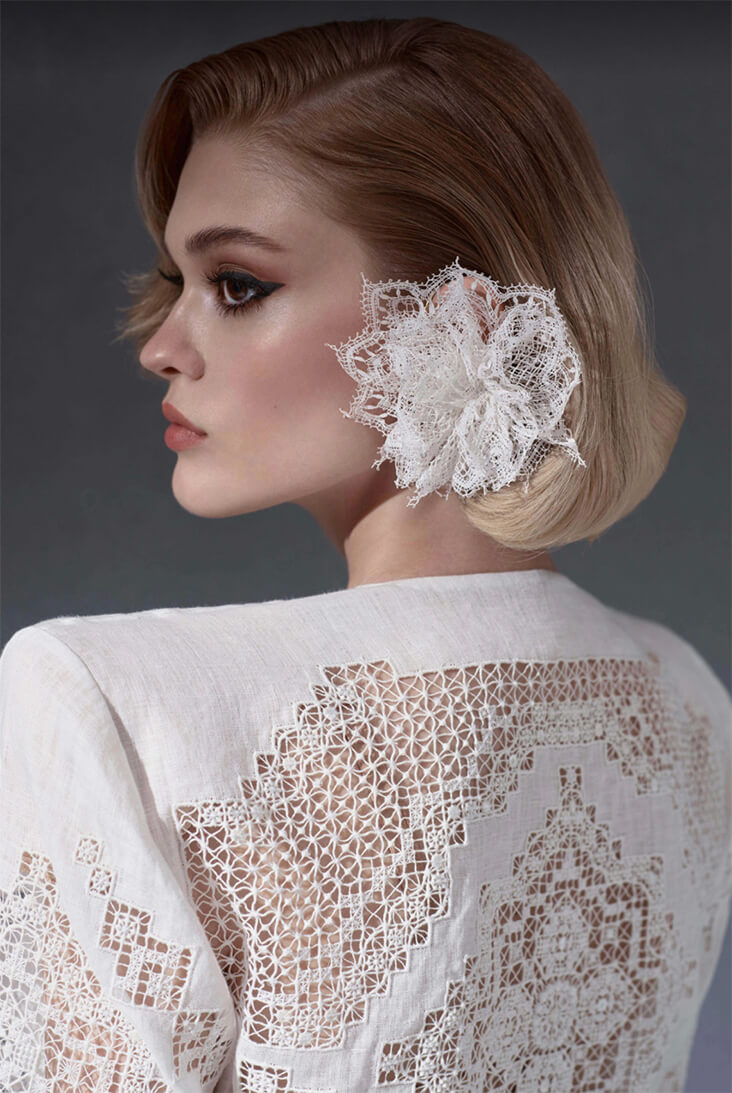 In Central Russia, embroidery was much more colourful, often employing three or more colours in a single garment. Much like their Northern neighbours, Central Russians also embroidered with geometric, angular forms. They worked with a wide variety of stitches, including set stitch, counted satin stitch and herringbone stitch, while designs were usually naturalistic, featuring plants, birds and animals. As in Northern Russia, the sun was also a recurring emblem symbolising the gift of life. Other symbols related to the seasons, particularly spring, when the birth of new life began. Across both Northern and Central regions, Russians believed embroidery could have great symbolic power, protecting them from harm or warding off evil spirits, and forming a private form of coded language. 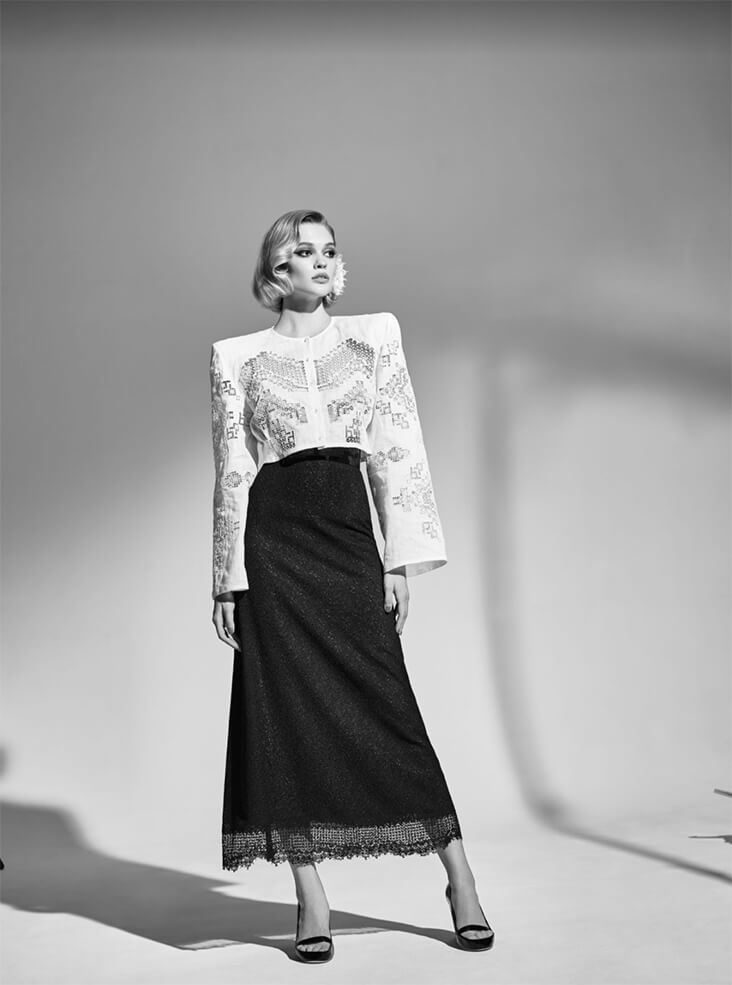 Although 18th and 19th century Russian embroidery in urban areas became more influenced by European styles, traditional motifs and methods were kept alive in rural village communities, and many persist to this day. In recent times, the historical significance of Russian embroidery has been revived by various artists and makers of a younger generation, who embrace a hand-made aesthetic, and celebrate the historical significance of their family heritage. One such maker is the fashion designer Polina Osipova; based in St Petersburg, her family hail from Chuvasia, an indigenous group with roots to the west of Russia’s Volga River, and embroidery is deeply embedded in their culture. Osipova reimagines the treasured folklore of her family’s past with fantastical embroidered headdresses, face jewellery, body armour and sculptures, a strikingly modern approach to remembering and preserving the treasures of the past. Similarly, Kazan-based fashion designer Tatiana Chernoguzova established an educational resource and creative community titled Your Yool, dedicated to celebrating the history, national costume and craft of her Tatar background, starting, with a refreshingly modern voice, what she calls “a conversation about Tatar identity in Russia.”