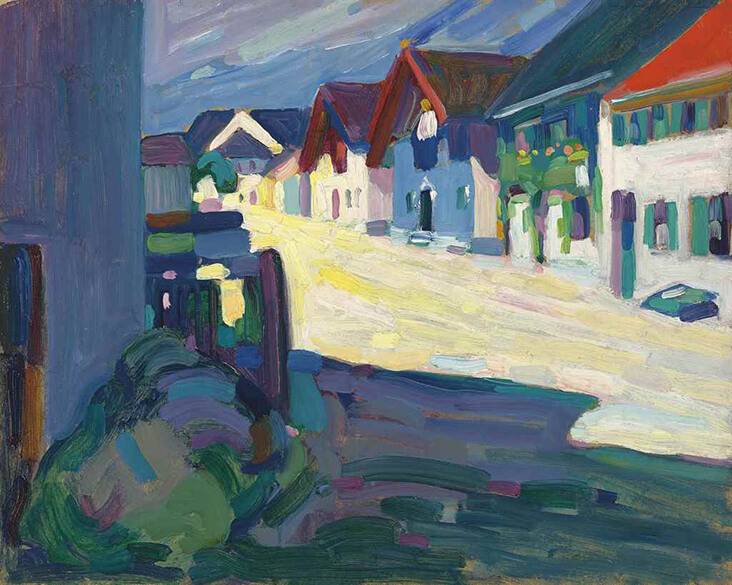 Russian artist Wassily Kandinsky was one of the 20th century’s greatest pioneers, spearheading a bold new language of abstraction that would alter the course of art history. He was particularly fascinated by the sonorous possibilities of colour, and how symphonic arrangements of light and dark could convey rich and complex emotions. No colour was out of bounds in his brilliantly hued artworks, but he often leaned towards bluish purples like that of MARLIN Linen for his base tones, because its cool, shadowy tone could invoke the mysterious and atmospheric shadows of dusk. 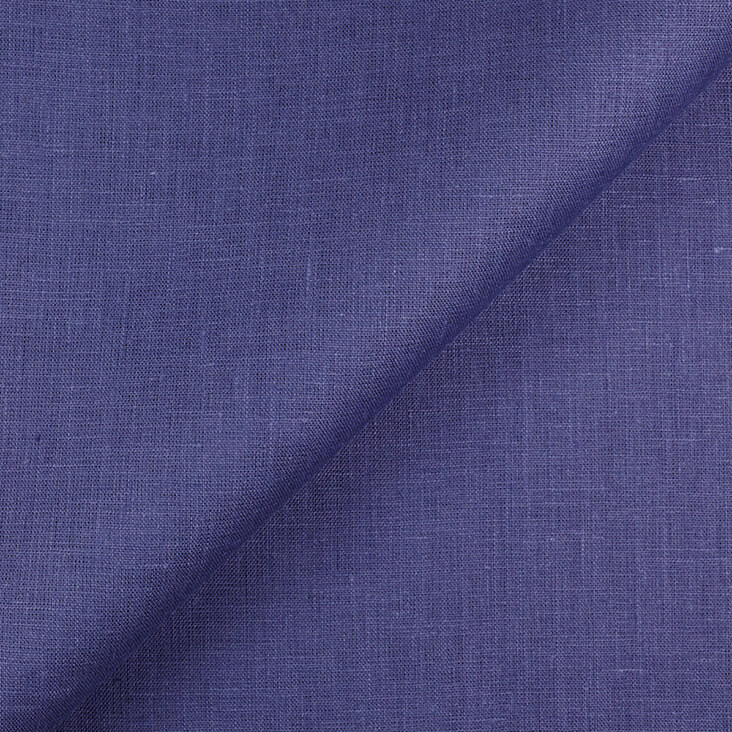 Kandinsky’s life was as vivid and colourful as his artworks. Born in 1886 in Moscow, Kandinsky’s family had diverse origins – his mother was a Muscovite, and his father was born close to Mongolia. Kandinsky spent much of his childhood growing up in Odessa, a city with a thriving multicultural scene, setting the stage for the artist’s later life of travel and adventure. Although he showed a precocious talent for art, Kandinsky initially chose to study law, ethnography and economics at the University of Moscow, followed by a teaching post as a law lecturer. It wasn’t until he was over 30 that he began to paint.

In 1896, Kandinsky took a bold leap into the unknown, leaving behind his secure career in law to study art in Munich. He trained for two years at the art school of Anton Azbe, and trained with Franz von Stuck at the Academy of Fine Arts. Before long Kandinsky was exposed to the avant-garde art scene of Munich, and his paintings became ever more vivid and expressive; in the next few years he became a leading figure in the rising school of German Expressionism. From the early 20th century onwards, Kandinsky’s paintings moved into an imaginative world of expressive line and intense colour, conveying deeply felt emotions beyond the tangible world. 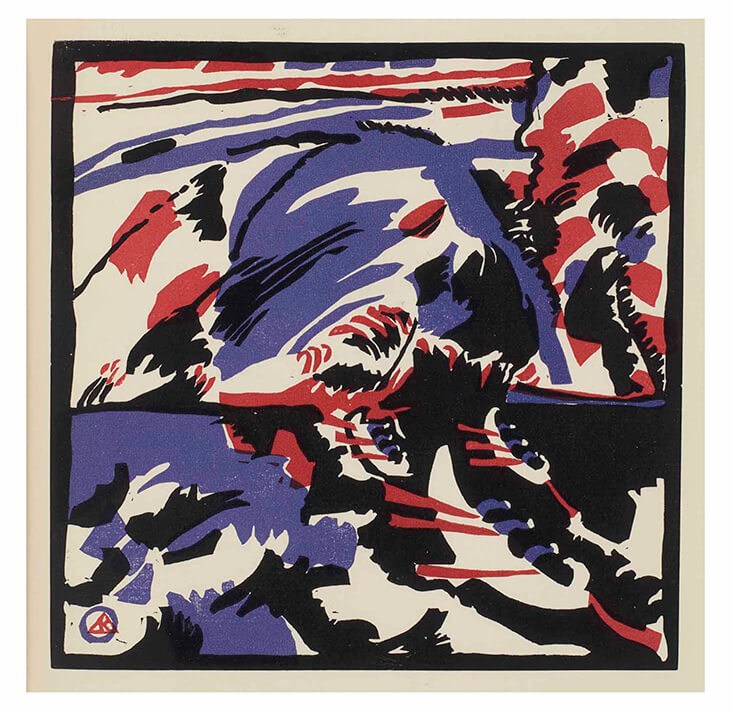 Kandinsky made the painting Murnau – Strasse, 1908, during a summer trip to the small market town of Murnau, hidden within the Bavarian Alps. This painting marked a significant turning point in Kandinsky’s career, when he was slowly moving away from realism and into the experimental realms of abstraction, distilling his subjects into their simplest essence. He captures the spirit of this tranquil town with streaks of almost blindingly bright pale yellow light, framed by a dense patchwork of blue and purple shadows, and this rich patina of dark tones enlivens a quiet corner of the world through the power of imagination.

Over the next few years, Kandinsky became increasingly preoccupied with the relationship between art and music, searching out ways to recreate sounds in visual form. Printmaking was an important strand of Kandinsky’s mature practice, and his series of woodblock prints titled ‘Klange’ (German for ‘sounds’) are recognised as some of the most radical works of art he ever made.  Kandinsky brought this series of prints together into the artist’s book titled Klange, which featured his own poetry alongside his prints – both imagery and text were as abstract and experimental as one another. Throughout the ‘Klange’ series Kandinsky worked with a limited colour range, but deep shades of bluish purple are dominant, infusing each work with the same hazy, poetic qualities of intrigue. 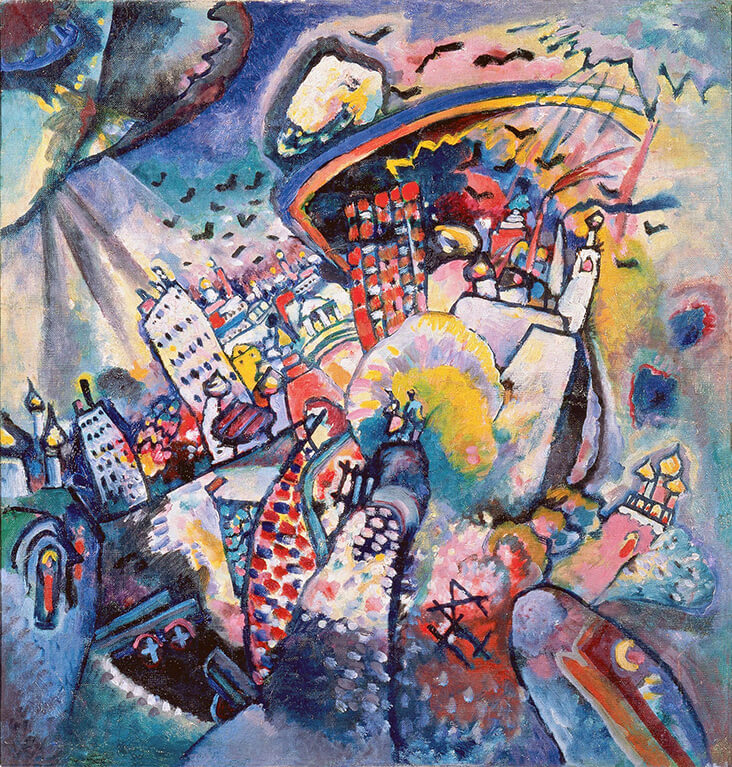 Following the radicalism of his woodblock prints, Kandinsky’s paintings became increasingly experimental. Improvisation 30 (Cannons), 1913 demonstrates his loosening grip on the real world, as descriptive, calligraphic lines and their illustrative colours separate from one another and begin to roam free. The title suggests the work was made through an intuitive process of improvisation, while also hinting at the musicality of Kandinsky’s method. In the centre of this painting, a deep pool of cold purple anchors us in, forming a great plume of smoke that emerges from the mouth of the cannon. Following the outbreak of war, Kandinsky returned to Moscow, and with his abstracted language he made a series of paintings dedicated to this strangely familiar city that had once again become home. Moscow, 1916 captures the artist’s fascination with the expanding landscape of modernity as it stretches across the developing city, forming deep pockets of mysterious shadow in its wake.