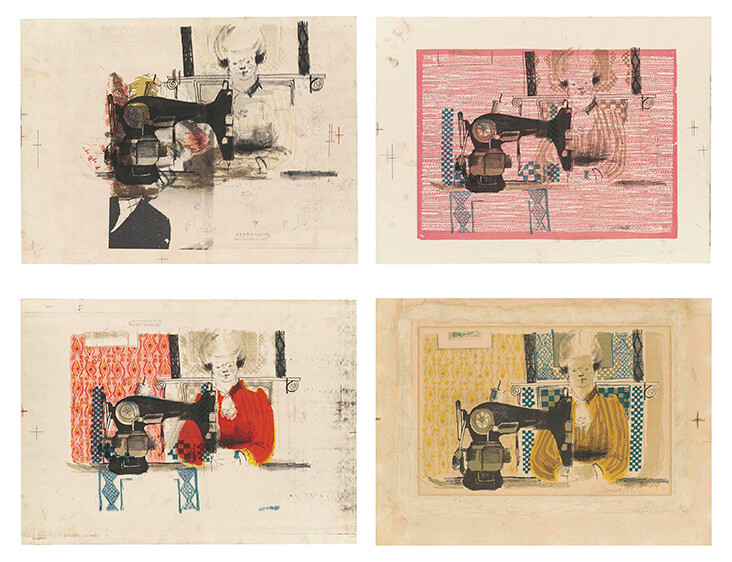 Woman with a Sewing Machine, 1954, Christie’s

Pattern, in all its multicoloured, decorative glory, is at the heart of David Hockney’s art. It was there in his art as a young, keen student in 1950s London, and it’s still alive and well in the art he makes today (only Hockney could reimagine the Yorkshire landscape as a series of eye-wateringly bright patchworks). Looking through Hockney’s hugely prolific career, we see a recurring obsession with textiles and their emotive visual impact. Much like Henri Matisse, Hockney’s art relies on the wow factor of funky, bright colours and eye-catching prints, many of which he found in the fabric collections and clothing of his family and friends. Unsurprisingly, sneak peeks into Hockney’s Californian home of the 1980s also reveal how he brought vivid textiles into his living environments, allowing them to feed his creative soul. 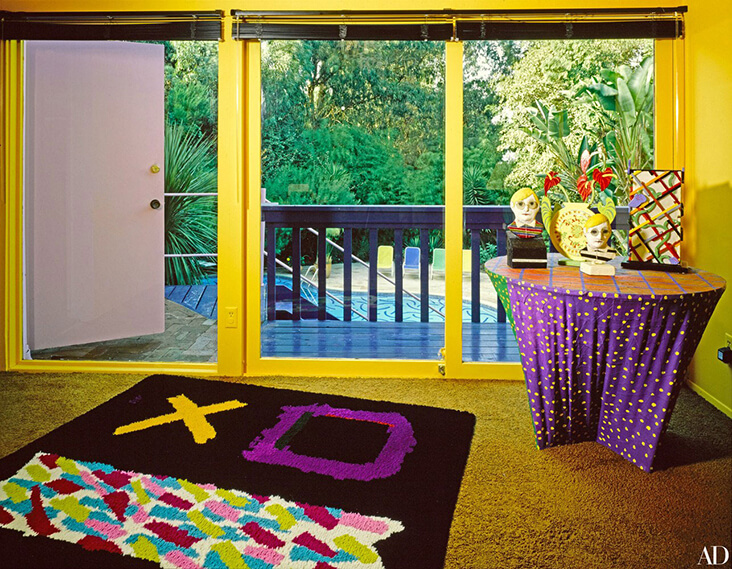 One of five children, Hockney came from humble beginnings. He was born in 1937, and raised in the industrial city of Bradford. From a young age Hockney had a close bond with his mother, so perhaps it is no surprise that she featured frequently in some of his earliest known artworks. When he was 17 years old, Hockney attended Bradford School of Art, and while still a student here he made a series of lithographic prints titled Woman with a Sewing Machine, 1954. The woman here was, of course Hockney’s mother, appearing as a figure of calm composure in amongst a sea of rich paisley and chequered patterns. She remained a constant source of support for Hockney, and this series seems to pay homage to her strength of spirit, as much as her creative ingenuity at the sewing machine. 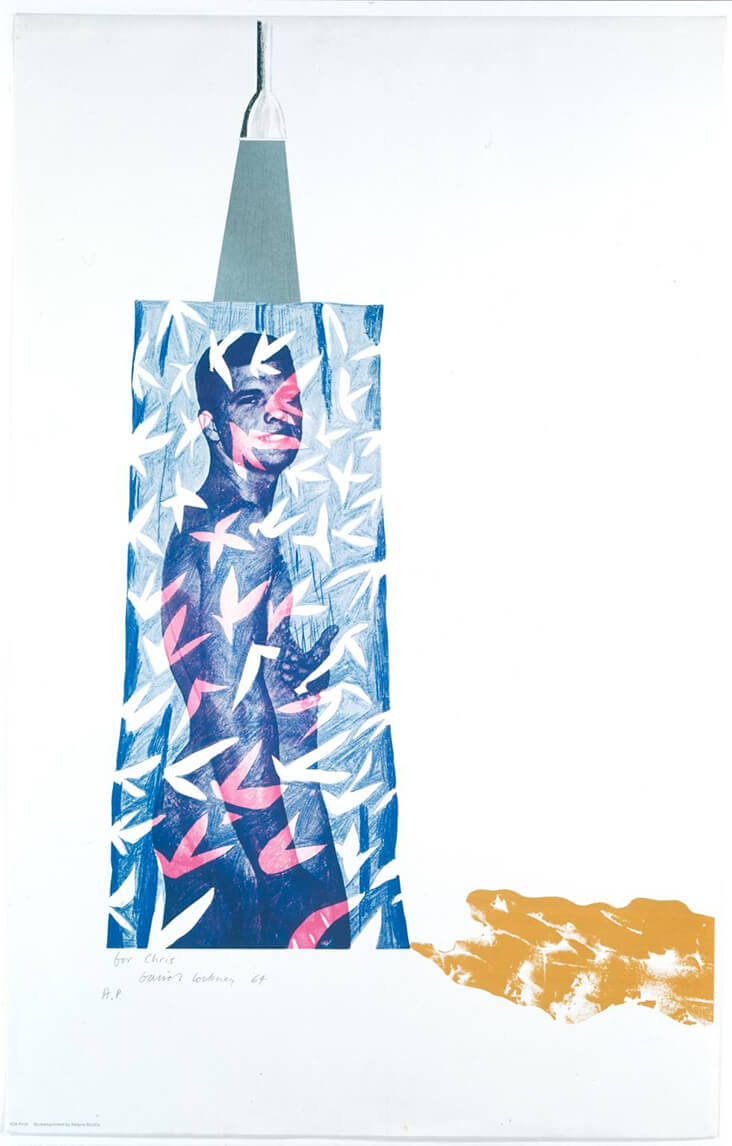 Cleanliness is Next to Godliness, 1964, Tate, London

After completing his degree in Bradford, Hockney went on to study at London’s Royal College of Art. Shortly after completing his postgraduate studies Hockney moved to Los Angeles, where the intensely bright sunlight and vivid scenery lit up his imagination, encouraging him to go bolder and brighter than ever before with his art. Hockney’s swimming pools are perhaps the best-known works of this era, but he also demonstrated his love of patterned fabric in many works. One striking example is the deeply intimate Cleanliness is Next to Godliness, 1964. The work features a young male nude in the shower, whose naked body is partially obscured by the sheer shower curtain. Hockney pays particularly close attention to the fabric pattern, enjoying how the striking, pop impact of its simple, Matisse-like motif can become a cheeky, almost-but-not-quite-modest smokescreen. 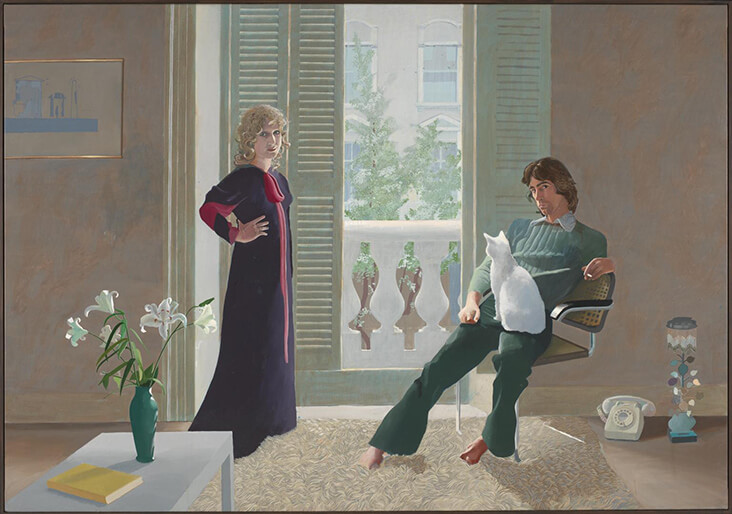 It was while living in Los Angeles that Hockney first met the esteemed textile designer Celia Birtwell, and the pair formed an intimately close friendship that would last a lifetime. Birtwell became Hockney’s muse throughout the 1970s, not least because Hockney was so fascinated by the arresting beauty of her bold textiles. Hockney’s portraits of Birtwell often document her wearing her own richly patterned 1960s textiles, with their swirling Op-art effects, sometimes cut into loose, bohemian style clothing by her fashion-designer husband Ossie Clark. 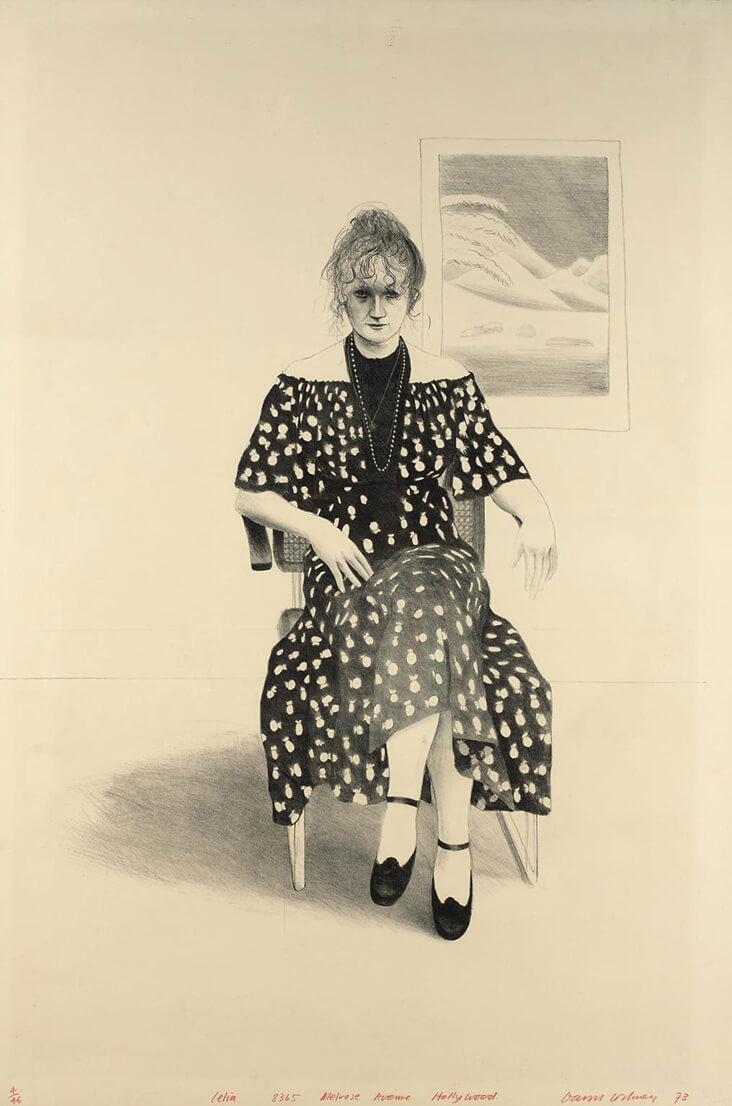 In what is perhaps Hockney’s most famous painting, Mr and Mrs Clark, 1970-1, Hockney captures Birtwell and her husband Clark posing together in their impossibly stylish home, wearing sleek, tailored clothing of their own designs, while their feet nestle into the sumptuous fur rug below. Though there is sensuality in the luxurious clothing and furnishing textiles, is telling that Hockney conveys something of the stiff tension and separation growing between the pair, who would go on to divorce just three years later. 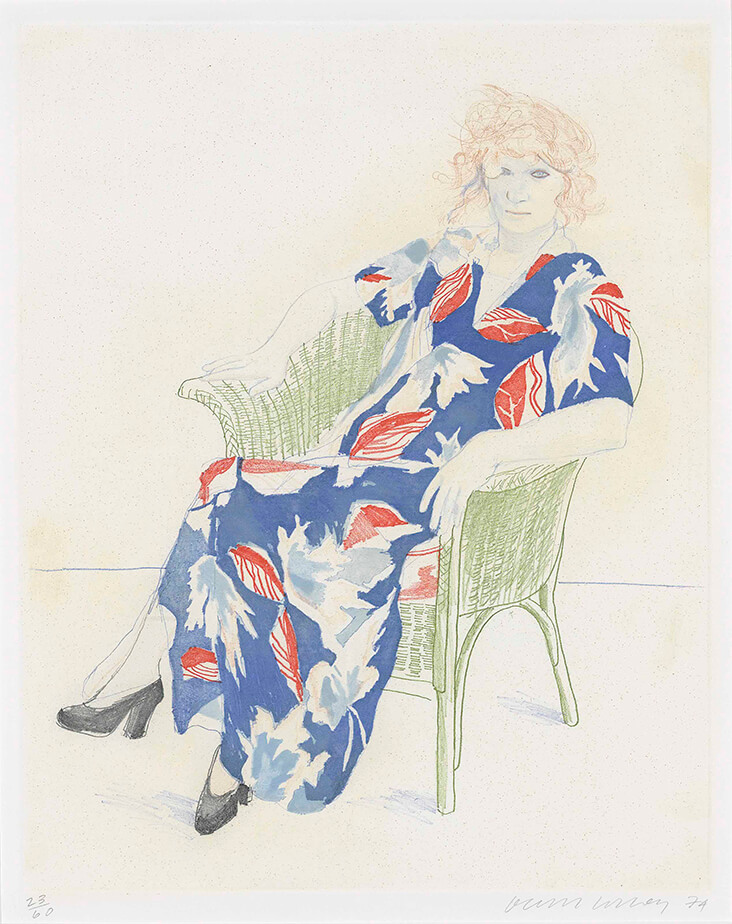 Hockney’s portraits of Celia alone, such as Celia, 1973, and Celia in a Wicker Chair, 1974 capture the many layers of complexity in Celia’s character, suggesting just how well Hockney knew her by now. In the former, monochrome work, Celia appears somewhat sombre and withdrawn, lips tight and body clenched into an upright stance, but it is the intricately patterned fabric falling over her body, so lovingly rendered by Hockney, that really gets into the heart of Celia’s inner world. Hockney’s painstaking patience in rendering the pattern and texture of the fabric so accurately reveals his deep fascination with the visual impact textiles could bring to his art. The latter work, Celia in a Wicker Chair, 1974, is more relaxed in mood, showing Celia leaning back with hair tousled into loose waves. Again, Birtwell’s own textiles designs are the primary focus, this time a rich blue adorned with a bold and playful leaf print, which Hockney has clearly enjoyed rendering against the scratchy pale green texture of the wicker chair beneath. We see Hockney’s wonderfully creative interplay of texture, pattern and colour in full-force here, subjects that would become his enduring, lifelong obsession.

Henri Matisse was an avid, obsessive collector, amassing a huge archive of incredible objects throughout his lifetime that clattered noisily against one another in his home studio. The most cherished of these possessions were Matisse’s impressively vast collection of textiles which he gathered from all over the world, including French tapestries, Persian rugs and African…