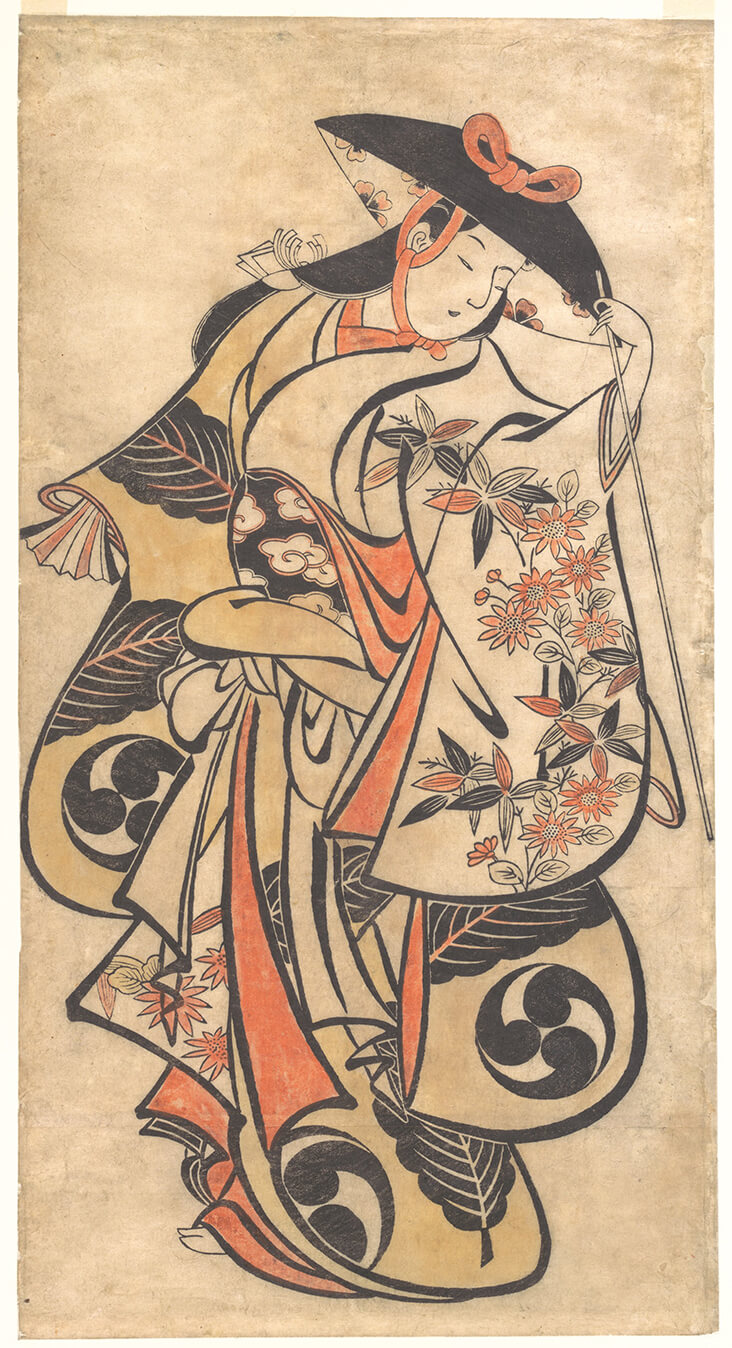 Throughout the history of Japanese ukiyo-e, fabric has been a defining feature, allowing artists to convey movement, energy and character. In this episode of our series on ukiyo-e art we will take a closer look at fabric in the second key phase of the movement, known as the Torii School. Following on the incredible advancements of the Hishigawa School of the early 17th century, two artists took the movement forward in a bold new direction: they were Torii Kiyonobu, and his father Torii Kiyomoto.

Torii Kiyonobu was well placed to take up the helm as a new leader in Japanese ukiyo-e art, having been a star pupil of the great Hishigawa Moronubo. Kiyonobu’s family had a long history within the world of kabuki theatre, and his father Kiyomotu was an established kabuki actor in Osaka. This relationship with theatre profoundly influenced the art of the Torii School, which is recognisable today for its theatrical dynamism, expressive facial expressions and rich layers of elaborate costume. 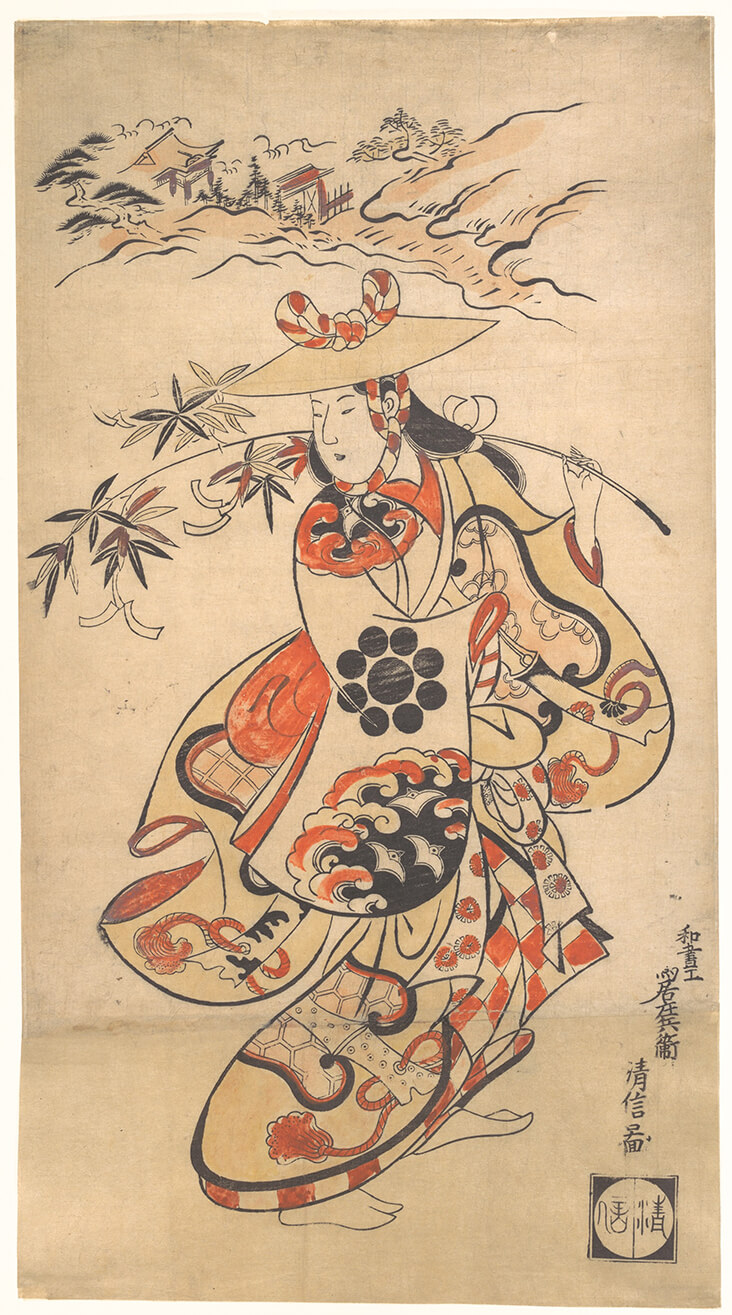 Torii Kiyonobu, Actor Sawamura Kodenji as a Woman at the Time of the Tanabata Festival, 1698, Metropolitan Museum, New York

When this father and son duo first founded the Torii School in late 17th century Edo, much of the art they made was promotional material for theatre, including posters, signboards and illustrations. Designed to attract attention, these vivid, colourful and dynamic designs placed an emphasis on character and action, and as such became hugely popular among Japanese audiences. Although actors were generally considered lowly professionals in early Edo, promotional material such as this did much to elevate the status of actors to a wide Japanese audience, and even came to influence the dress sense of the wealthy merchant classes in Edo.

In the late 17th century, the Torii moved on to making full-sized paintings and prints solely as works of art. But they retained the same impactful weight, character and movement of their theatrical designs, and it was this immediately arresting quality that allowed them to earn a wide following across Japan. Many of their artworks continued to illustrate idealised actors caught mid-action as if moving through time and space as their clothing swishes around them, as seen in the woodblock print Actor Sawamura Kodenji as a Woman at the Time of the Tanabata Festival, 1698. Minimal backgrounds reinforced the focus on actor and costume, although some works are more complex, such as the ink tinted woodblock print Scene from a Drama, 1745, which merges the actors’ floral clothing with the leafy grasses and trees beyond. Other subjects embraced by the Torii included courtesans, erotic scenes and sumo.

Bold, dramatic black lines in swooping and swirling patterns were the defining feature of the Torii’s art, conveying the motion of stunning, luxurious Japanese fabrics. The Torii explored this style predominantly in ink painting and woodblock printing. Many of their prints were hand-tinted with inks and dyes, and one of their favoured colours was the lead-based orange tone known as ‘tan-e’, which was such a striking colour that it gave their work an immediate visual impact. In the elegant Kabuki Actor, 1708, we see how skillfully these dark sweeping lines convey the movement of clothing, which is tinged with the tan-e orange tone and the intricate floral patterns typical of Japanese silk. 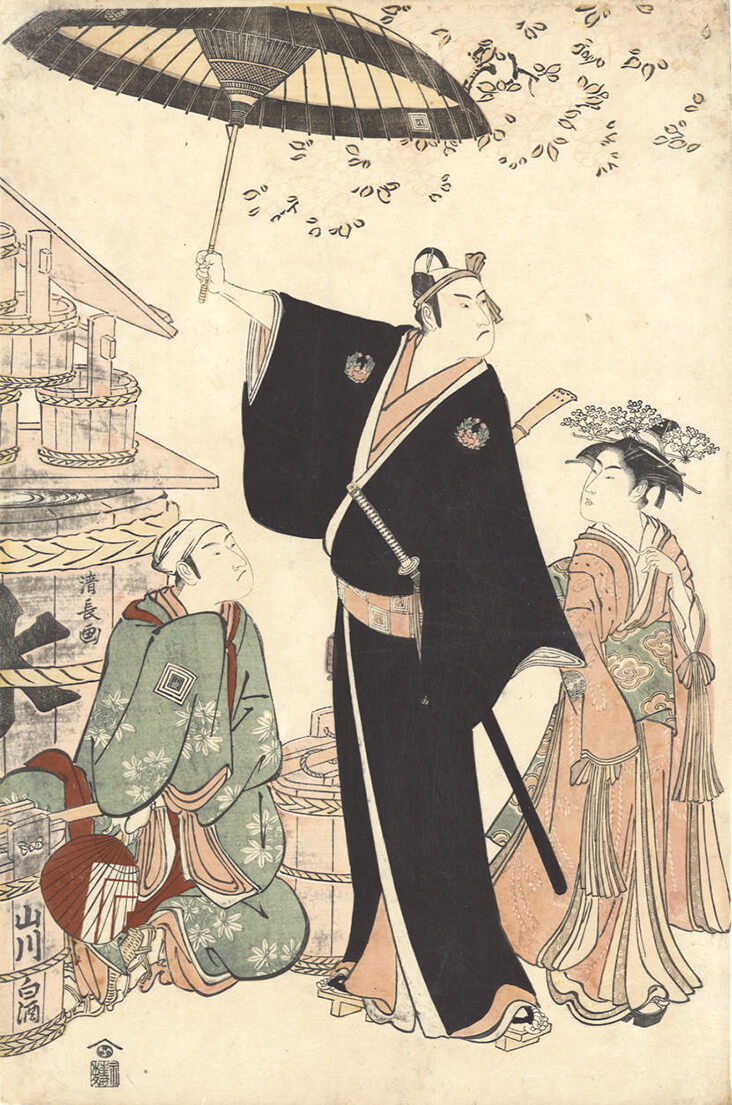 The Torii School was profoundly influential on the ukiyo-e art that followed. When Torii Kiyonobu retired, he was succeeded by Torii Kiyonobu II, who continued to teach the next generation of artists how to infuse their art with the same characterful qualities of drama and action, and an emphasis on Japanese kabuki costume. One of the style’s leading successors was Torii Kiyomasu, whose art had a softer, gentler style with finer lines and a graceful elegance, while continuing to illustrate kabuki actors from the stage dressed in stunning silk costumes. Torii Kiyonaga shared a similar style as Kiyomasu, with finer lines and delicate floral patterns suggesting the rippling movement of soft Japanese fabric. Eventually, the Torii School was succeeded by Katsukawa Shunyo, who placed greater emphasis on realism and facial expression in his portrayals of kabuki actors. But amazingly, some members of the Torii family are still involved in painting kabuki signboards today, demonstrating just how important and long-lasting the Torii School legacy has been.