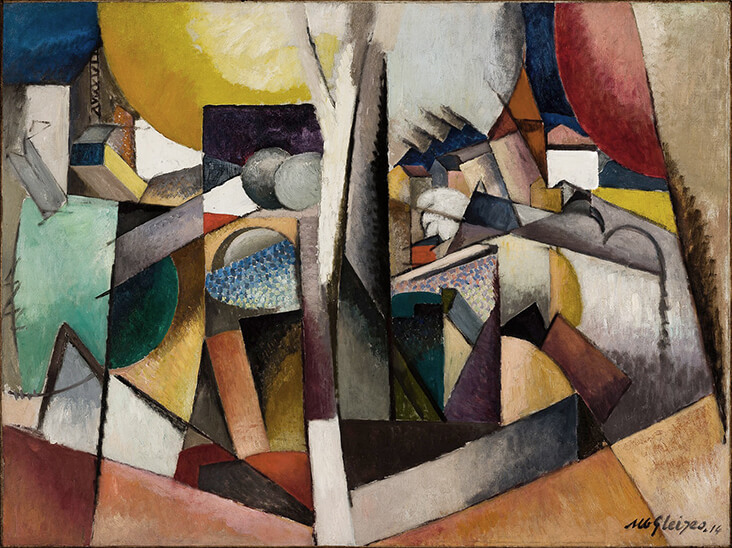 French painter Albert Gleizes had a particular knack for painting radiant, golden tones alike to CURRY Linen, investing his paintings with a humane and deeply comforting warmth. A leader in the school of French Cubism alongside Pablo Picasso and Georges Braque, Gleizes pioneered new ways of seeing the world, painting with multiple perspectives and fragmented forms that destabilised pictorial conventions and ushered in a new wave of modernist vision. Figures, landscapes and still life subjects are all reduced into the same shattered fields of angular light in his Cubist eye, but it is the neutral shades of golden brown and sandy beige that pull his compositions together, allowing them to glow with an inner radiant light. 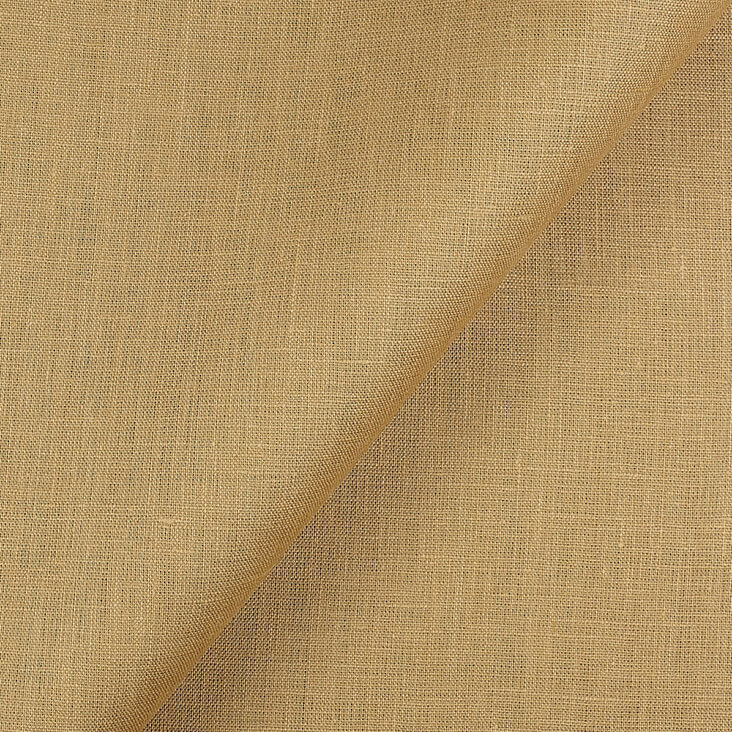 Gleizes was born in Paris in 1881 and remained there for much of his adult life. He was a dreamer from a young age and preferred dawdling in the wilderness and writing poetry to the strict doctrines of school. Gleizes’ father was a renowned fabric merchant and he brought his son into the factory’s design shop to teach him discipline and rigour, skills that would play a vital role in his adult art.

Gleizes was determined to become a painter, and in his teenage years, he began emulating the Impressionist style with dappled brushstrokes and light, sparkling colour. From 1901 Gleizes began exhibiting his paintings in Paris, and by 1904 he was achieving widespread recognition as a member of the rising avant-garde. In the years that followed Gleizes began moving towards Cubism, emulating the art of Henri Le Fauconnier and Jean Metzinger with the same geometric, faceted forms. By 1910 Gleizes had become an active member of the Parisian Cubist circle alongside Picasso, Braque, Le Fauconnier, Metzinger, Robert Delaunay and many others. 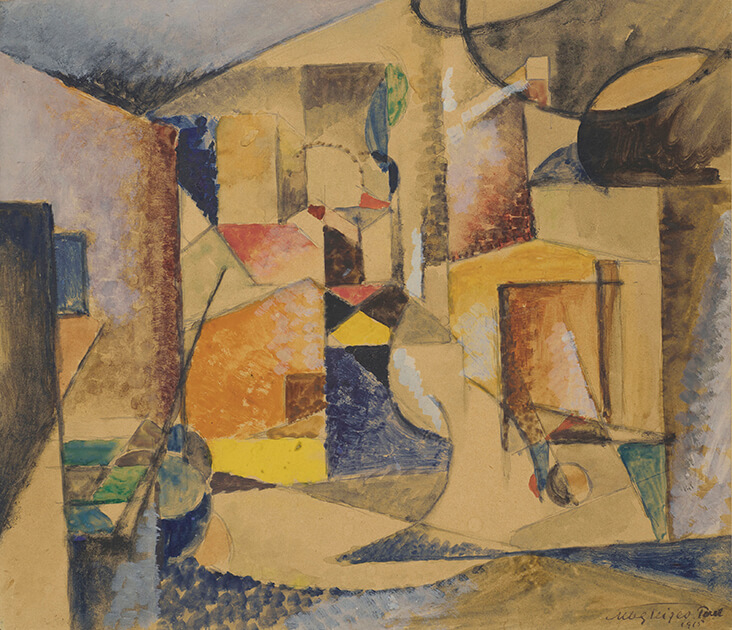 Gleizes’ brand of Cubism was defined by dynamism and movement, with angular shards of broken colour that seem to dance and move across the picture plane. In contrast with the disciplined Cubism of Picasso and Braque, which focussed strictly on interpretations of the real world, Gleizes took a philosophical approach, seeing the Cubist style as a meeting point for the real world and the imaginary depths of the human mind. He saw “painting as the area where mental awareness and the real space of the world could not only meet but also be resolved”.

Paysage, 1914 is a particularly spirited, lively colour scheme within Gleizes’ genre, as architectural and naturalistic fragments fall into and over one another like shards of glass glinting in the light. But the canvas is unified by warm shades of sandy beige and yellow that sweep in from the right side and continue to travel through the undulating scene, softening the sharpness of the colours around it. In the loose and expressive drawing Composition, 1915, Gleizes work onto a neutral, beige toned backdrop, which he allows to shine through and dominate the entire page with its enveloping, fleshy warmth, even as fleeting passages of line, colour and texture dart across its surface. 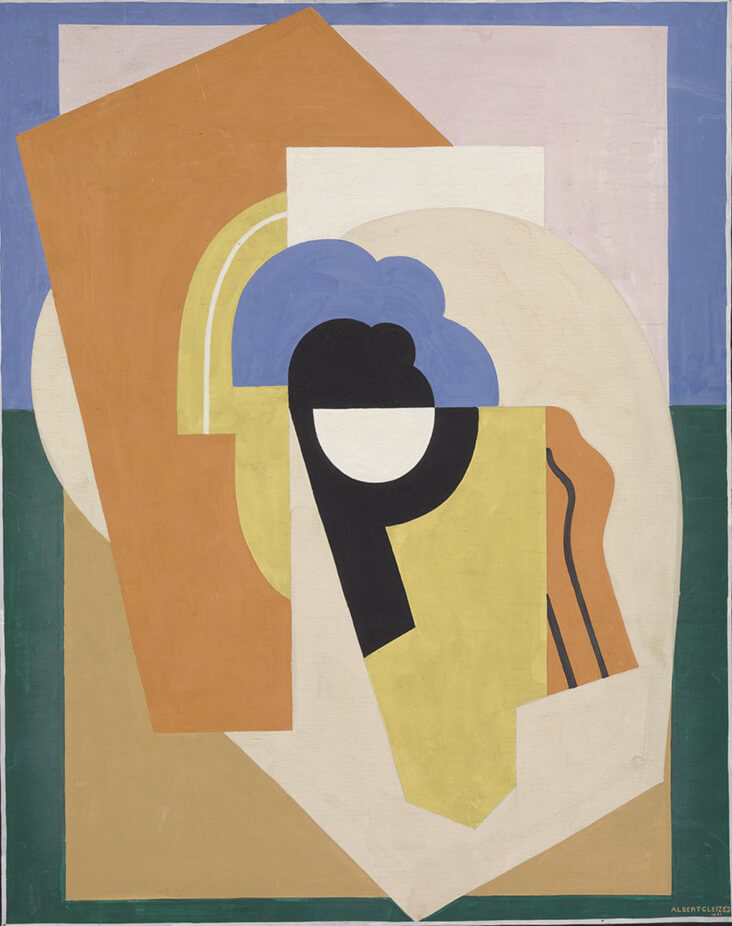 Throughout the 1920s Gleizes’ paintings became increasingly austere and stylised, moving beyond the shattered distortions of Cubism to an increasingly simplified abstraction. Dynamism and movement were still central concerns of his practice, but they were arrived at through a cleaner, purer language. Painting, 1921, is an exercise in elegant restraint as a warm beige backdrop is layered onto with sharp, zesty shades of turquoise, white and lemon. The art historian Daniel Robbins has suggested Gleizes made this painting as a portrait of his wife seen from several different angles, and it is likely the colour scheme was intended to invoke his feelings of warmth and affection towards her.

Figurative references are more overt in the painting Woman and Child, 1921, made the same year, as the outlines of faces, arms and bodies can be seen within this complex jumble of flat shapes. Colours are carefully chosen for their harmonious balance, as warm tones of peach, dusty grape, grey and blue intercept one another in a prismatic, kaleidoscopic arrangement, jutting to-and-fro to suggest the familial dance between mother and child that has dominated art history for centuries. The muted, subtle shade of dark sand is an essential component in this carefully balanced design, bringing gritty human warmth and spiritual significance radiating in an intimate circle around the central characters.

American painter Robert Ryman made many of his quiet, introspective paintings on biscuit toned backdrops, coloured with the same warm, comforting neutral of NEW SAFARI Linen. He interrupted these backgrounds with jarringly fresh shades of arctic white, sometimes skidding like an accident across the picture plane, other times neatly ordered into fenced off squares. A…

Peter Lanyon’s turbulent paintings capture the sublime rough and tumble of the English coastline, with free, energised brushstrokes and luminous shades of grey alike to QUARTZ Linen. A leading member of the St Ives School in Cornwall, Lanyon blended the style of Abstract Expressionism with the majestic wonder of the Cornish landscape, painting craggy rock…

The great American realist Edward Hopper had a remarkable gift for observation, finding strange intrigue in the most unlikely of places. Gas stations, late-night bars and quiet buildings tucked away in the wilderness all take on an enigmatic wonder through his stark, directional lighting, angular compositions and striking accents of colour. BARN RED Linen’s entrancing…

Andrew Wyeth’s paintings are an ode to the barren, melancholic wonder of the American outback, celebrating its long, parched grass and creaky buildings stained yellow in the sun. The golden glow of APPLE CINNAMON Linen tinged Wyeth’s paintings with the tart sweetness of homemade apple juice, infusing a comforting warmth into his otherwise lonely, abandoned…