Peter Lanyon’s turbulent paintings capture the sublime rough and tumble of the English coastline, with free, energised brushstrokes and luminous shades of grey alike to QUARTZ Linen. A leading member of the St Ives School in Cornwall, Lanyon blended the style of Abstract Expressionism with the majestic wonder of the Cornish landscape, painting craggy rock faces, turbulent clouds and frothy ocean waves as an energised flurry of movement and sensation. “It is impossible for me to make a painting which has no reference to the powerful environment in which I live,” he explained.

Lanyon was born in the small fishing town of St Ives in Cornwall, England in 1918. His father was a musician and photographer who encouraged Lanyon’s artistic interests and in 1936 Lanyon enrolled at Penzance School of Art. In 1939 Lanyon spent several months studying at the Euston Road School in London, where he was taught by leading British painters including Victor Pasmore and William Coldstream, although the threat of war forced him to return to Cornwall later the same year. By the time Lanyon had returned to St Ives, the small fishing town had become a popular mecca for various leading artists from London and beyond who were looking for an escape from wartime city bombings, including Ben Nicholson, Barbara Hepworth and Naum Gabo. 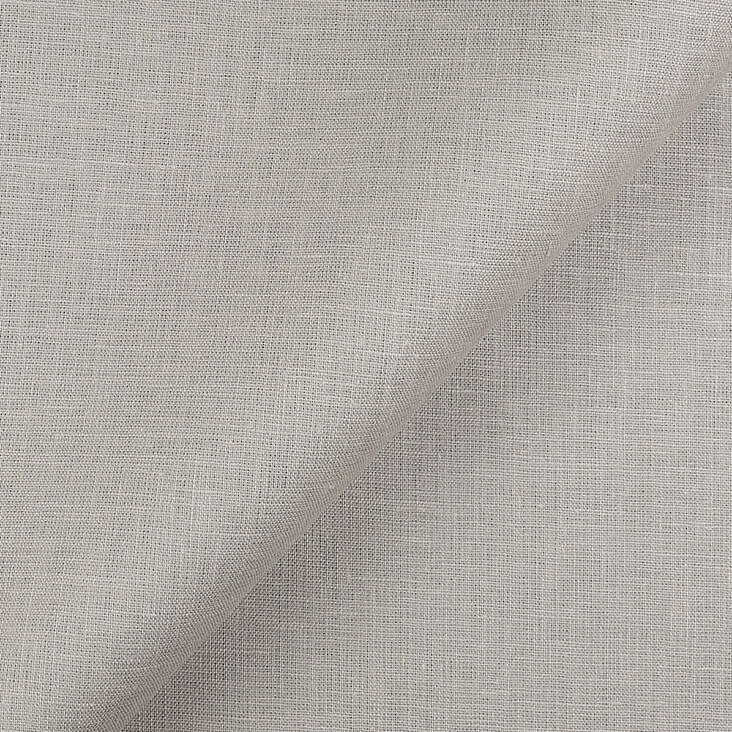 Lanyon thrived in the unique culture of St Ives during and after the Second World War, mingling with various different artists and absorbing ideas from all around him. Nicholson and Gabo both had a particularly profound influence on Lanyon’s art, leading him to make paintings and sculptural constructions with angular, Cubist-style forms and structures loosely based on the shapes and textures of the Cornish landscape. The brooding, dramatic painting Headland, 1948 reveals Lanyon’s fascination with the cavernous rock forms along the St Ives coastline, with their ancient, pale grey surfaces falling into black pockets of shadowy darkness. Lanyon created this quality of three-dimensional space by layering up thin veils of colour and gradually scraping them back so each one left its own ghostly residue behind. 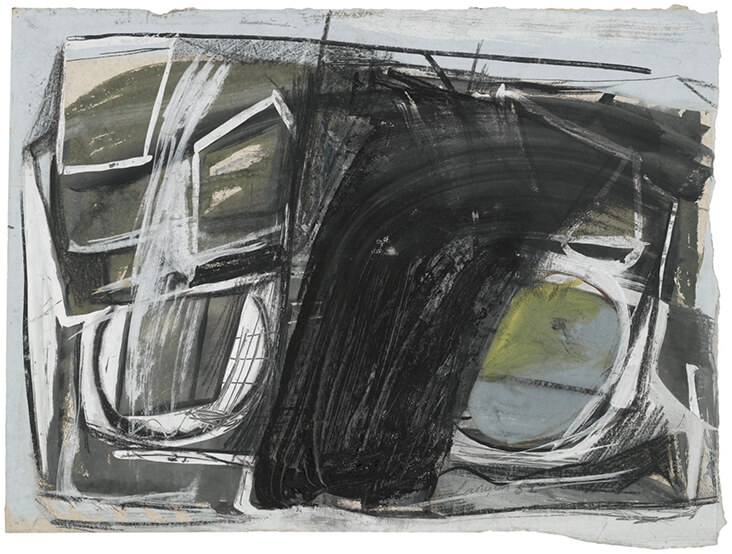 Throughout the 1950s Lanyon moved beyond a literal translation of place, instead painting what he called “experiential landscapes,” combining multiple views of a place from across, above and below on top of one another, creating the sensation of a constantly shifting flux. Porthleven, 1951 has a Cubist quality, with sharp angular forms and loose areas of architectural line that seem to float in space. The entire painting is dominated by steely shades of pale grey and blue, lending it the sharp, crystalline light of the Cornish Sea. In the later work on paper North Coast, 1952, Lanyon builds an intense flurry of curved and angular lines on top of one another to create abstract space, while pale, bluish grey frames the edges with the crisp sharpness of coastal air. 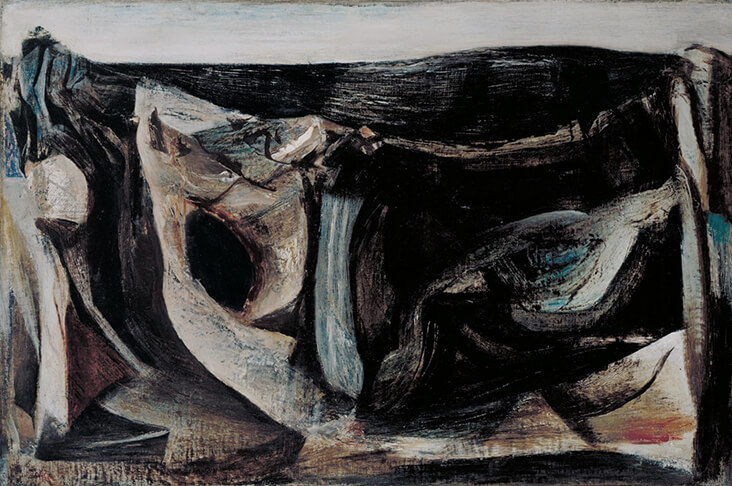 The drawing Coast, 1953, is part of a series Lanyon made to depict the Penwith coastline of Cornwall, conveying what he called “this rolling together of a place with its human population, economic and social activity and historical past.” Broad, horizontal streaks of pale grey sweep across the foreground, conveying the transient, constantly shifting motion of oceanic waves, conflicting with the flat solidity and permanence of dark grey and green land below it. Works like these reveal just how closely tied Lanyon was to the light, colours and textures in the landscape of his childhood, and this love affair with the place has become his greatest legacy. Art historian and curator Toby Treves says Lanyon, “…had the ability to express something in a landscape that no one had been able to do before – he managed to evoke a real feeling of being in the place physically and emotionally, with the most wonderful selection of colours – a remarkable feat.”