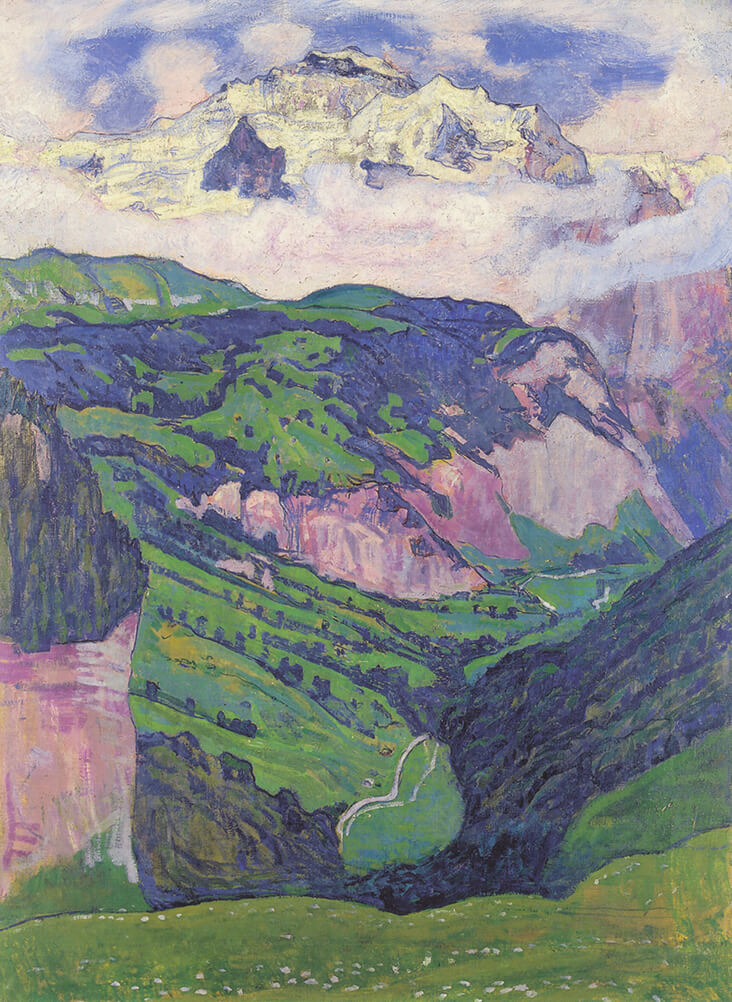 Swiss Symbolist painter Ferdinand Hodler’s art is a homage to the wonders of the Swiss landscape, conveying jagged, snow-peaked mountains and glossy mirrored lakes with flat panels of vivid, jewel-like colour. The indigo of NIGHTSHADOW BLUE Linen was his favourite colour for conveying depth and shadow, which he brought in to describe shadowy mountain ranges and dark valleys, investing into them a quietly brewing mystery and magic. He believed art should simplify the real world into harmonious order and symmetry, distilling it into its more raw, elemental essence, noting, “the artist’s mission is to give shape to what is eternal in nature, to reveal its inherent beauty.” 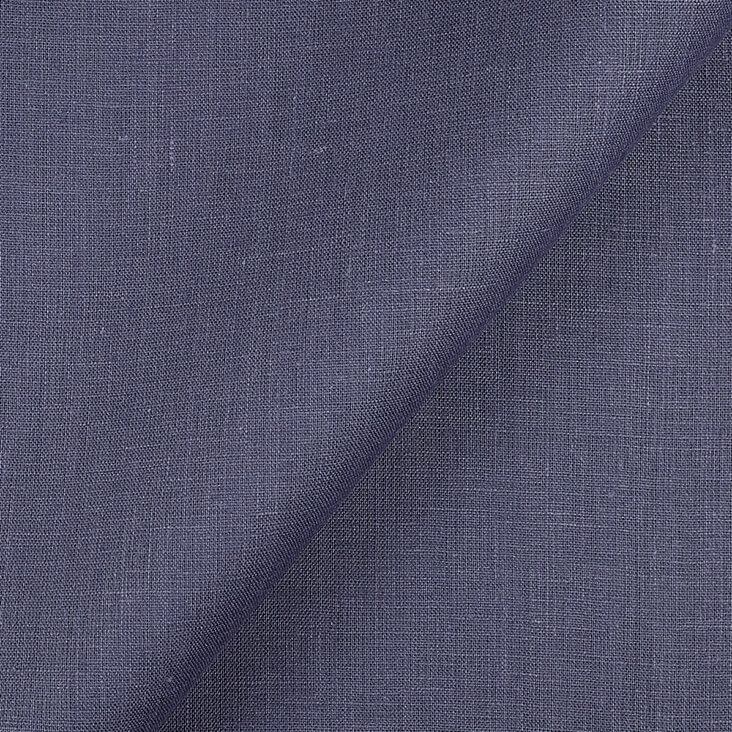 Born in Bern in 1853, Hodler was the eldest of six children in a poor family who struggled to get by. His father, a local carpenter died when he was still a child, followed by his mother when he was 13 years old. Hodler’s step-father was a decorative painter and it was he who first encouraged the boy’s artistic talent by giving him painting lessons. As Hodler’s confidence in his abilities grew he moved on to increasingly ambitious ventures, first taking up lessons with a local landscape painter before moving to Geneva to train with a sign painter. In 1873 Hodler studied painting under Barthelemy Menn, who first introduced him to the work of the French Romanticists and Realists. During further travel throughout Europe, Hodler studied the art of Old Master including Albrecht Durer, Leonardo da Vinci and Hans Holbein, admiring their dedication to the truth of nature. 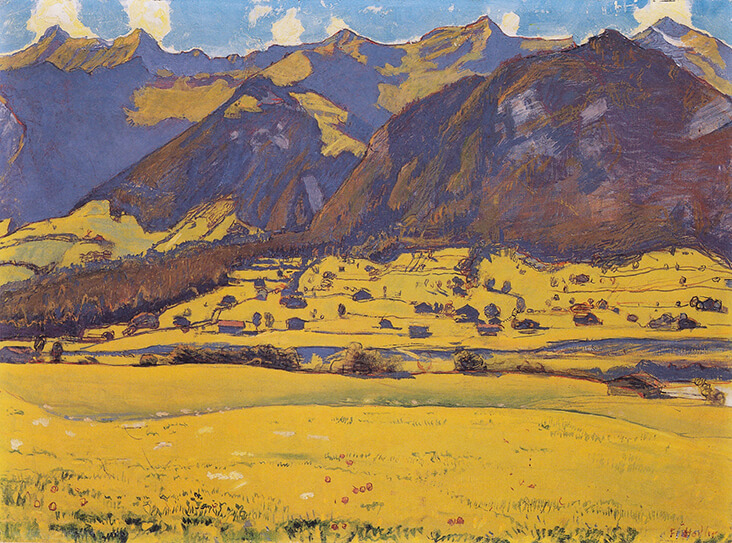 View of the Horn of Fromberg from Reichenbach, 1903

By the 1880s Hodler had moved into an impressionistic style, painting people and places observed from life with naturalistic colours and fresh, lively brushstrokes. His sympathies lay closely with the French Post-Impressionist and Symbolist artists Paul Gauguin and Vincent van Gogh, sharing with them a desire to create a more subjective, imaginative response to the real world. Over the next decade Hodler’s forms and colours became even more simplified and flattened out while his compositions had an emphasis on repetition and symmetry. He called this style ‘Parallelism’, likening its sense of structure and order to the harmonies of the natural world, writing, “I call ‘parallelism’ any kind of repetition. When I feel most strongly the charm of things in nature, there is always an impression of unity.”

The stunning topographical scene The Lady of the Isenfluh, 1902 typifies Hodler’s mature art, with flat planes of colour arranged to form a symmetrical v-pattern meeting in the low-lying valley. Relying on a simplified colour scheme, green and pale lilac form sonorous vibrations with a tart purple-tinged blue, a colour which makes rivulets of shadow that run down into the mountainous hillsides. By the early 1900s Hodler was receiving widespread recognition for his dreamy, imaginative Swiss landscapes, offering an escape from the rising world of industrialisation. 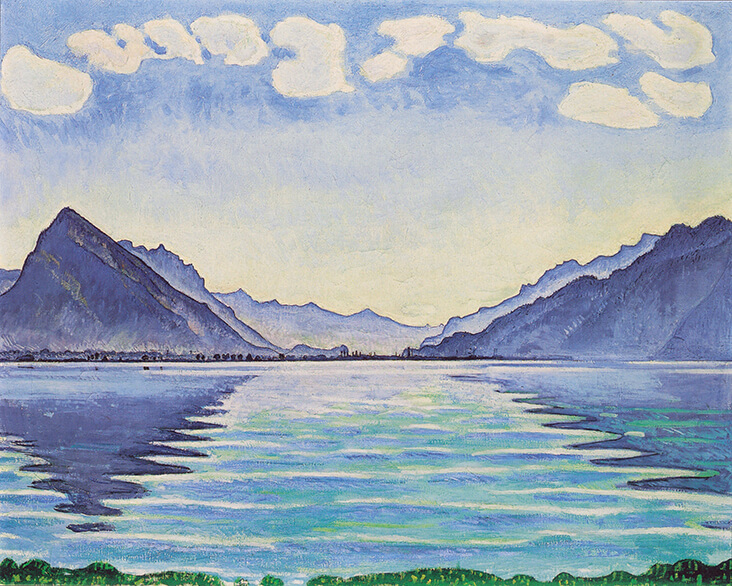 View of the Horn of Fromberg from Reichenbach, 1903 heightens the dramatic impact of the landscape with grasslands transformed into iridescent panels of lemon yellow, an acid-sharp colour that is neutralised by the dark purple mountains that loom dramatically overhead and cast ripples of shadow onto the land below. In Forest Brook at Leissingen, 1904, we look across a sea of craggy uneven rocks, through an ordered row of trees to the strip of mountain beyond, flattened out into a horizontal band of electrically charged deep violet.

The dazzling Lake Thun, Symmetric Reflection, 1905 is perhaps one of Hodler’s best known works, capturing a view across the famous Alpine Lake Thun with vibrantly fresh shades of turquoise, indigo and forest green. Distant, deep violet mountains are painted as symmetrical, angular shards that reflect in the rippling water below, while soft white light illuminates the space all around them, investing into the painting a mood of order, tranquillity and calm.