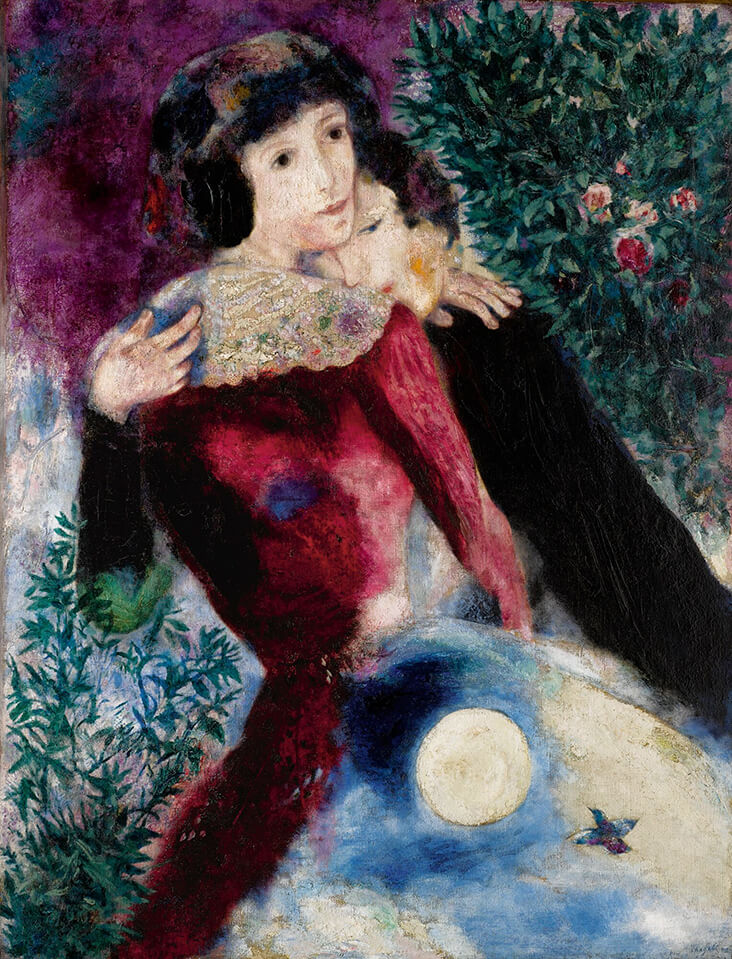 EGGPLANT linen’s rich plum tone bled into Marc Chagall’s whimsical scenes, colouring them with stains as tart and ripe as fresh blackberries. Inventive colour was a vital strand in his fantastical scenes, taking his famous floating lovers, animals and musicians further from the realms of reality into a wondrous, escapist dream. He wrote, “Colour is everything, colour is vibration like music; everything is vibration.” Impassioned purples came to embody the hue of life and love, especially when painting his lover Bella, who he saw surrounded by “blue air, love and flowers…”

Born as the eldest of nine siblings in the Belarussian town of Vitebsk in 1887, Chagall had a painfully poor childhood. Though he called Vitebsk a “strange town, an unhappy town, a boring town,” he escaped into the wilderness to fire up his imagination through drawing and play. Early art training came from a local portraitist and Chagall soon discovered his true calling in life; by the age of 19 he had moved to St Petersburg to train with the Imperial Society for the Protection of Fine Arts. Marred by poverty, Chagall often skipped meals so he could buy art materials. 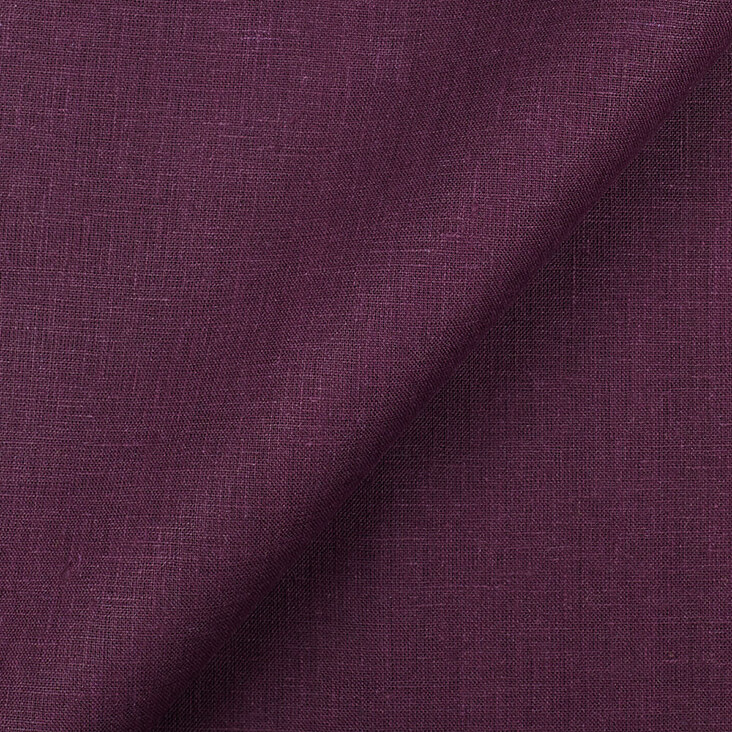 Russian artist Leon Bakst first introduced the young Chagall to the Parisian avant-garde. Chagall was blown away, so much so he managed to finance a move there in 1911 with support from a member of Russia’s elective assembly. Following a return to Russia in 1914, Chagall met and fell for the wealthy intellectual Bella Rosenfeld, marrying her in 1915. He eventually took Bella and his young daughter back to Paris again after the First World War in the 1920s. In the gloriously romantic Les Amoureux, 1928, Chagall paints himself and Bella locked into an embrace, while inky berry shades form blooms around his lover with the searing passion of their unbreakable love.

Chagall remained in Paris with his young family for many more years, remaining hugely prolific and slowly finding an audience for his art through the dealer Ambroise Vollard. In The Bridal Pair with the Eiffel Tower, 1939, Chagall and Bella become the famous “floating lovers,” one of the artist’s most timeless motifs. This time it is Chagall who is plunged into an enveloping shade of deep blushing crimson as he sweeps his bride upwards with him towards heaven. 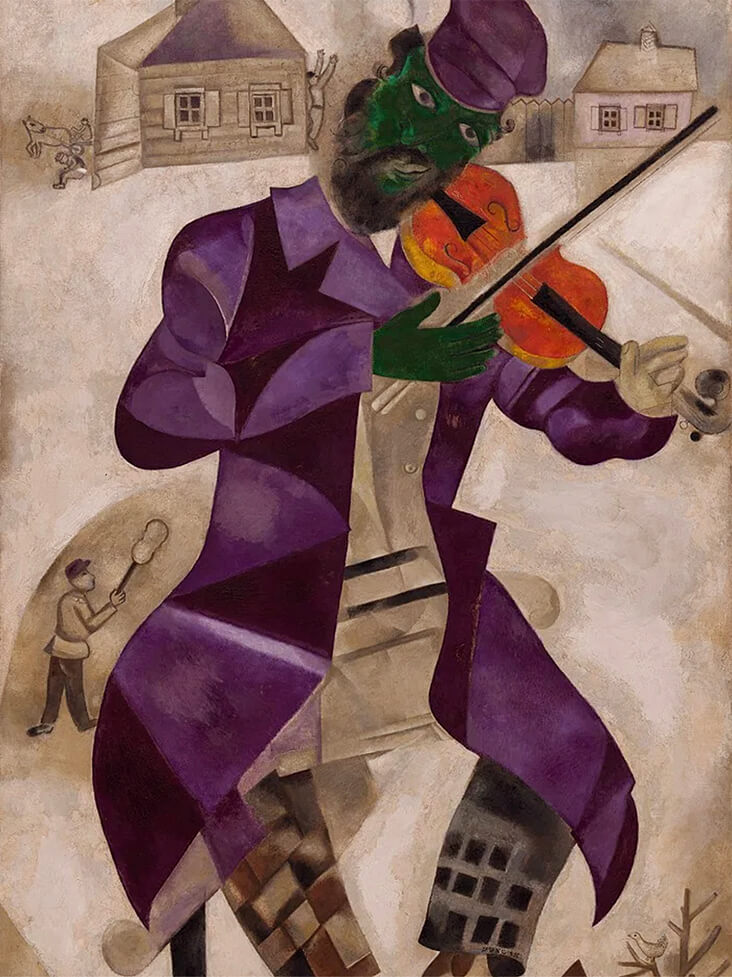 In 1940 Chagall moved with his family to New York to escape Nazi persecution and darker times led his paintings to become increasingly complex, hidden with a myriad of personal symbolism. In the deeply complex artwork The Juggler, 1943 a curious hybrid bird creature leaps across the air while onlookers observe the strange performance from below. Below them a juicy pool of dark raspberry opens out into a bottomless void, pulsing with the fiery intensity of a beating heart.

After leaving the United States for a return to his beloved France, Chagall’s artworks reverted to the simpler frivolity of his early career, as demonstrated by the light-hearted Blue Violinist, 1947. A moonlit blue light emanates from the canvas but it is shot apart by searing shades of blazing orange, red and a delicious jam purple that bring the character’s warm, glowing musicality to life. In his later self-portrait The Painter in front of the Easel, 1949 – 69 Chagall strips colours back to just two; iridescent blue and a deep plum that stains his body with juicy vibrancy. The artist’s outstretched arm paints the floating lovers while above them a strip of rich dark crimson, a shade Chagall came to call “the colour of love” unites them together as one.

Colouring flowers, ribbons, veins and pulsing hearts, the iridescent crimson in BIKING RED Linen is the lifeblood of Frida Kahlo’s paintings. Echoing the tinge of red in the Mexican flag, this shade came to represent many forces in Frida Kahlo’s deeply introspective paintings, but a unifying theme was a love for her native Mexico, which…

First things first, this NICO pattern is great. Not only does it come in the most high quality packaging, but it is simple to follow, gives you three styles to sew, and looks brilliant when finished. This dress will fit perfectly into my wardrobe, and I bet it would look good in yours too. I…

Dazzling, brilliant blues like that of SAPPHIRE Linen define the paintings of Alexej von Jawlensky, streaking across his canvases with pulsing, living electricity. Modernist, Fauvist and Expressionist, Russian-born Jawlensky was a bold risk-taker, one whose wild, unbound art inspired a whole generation across Europe and beyond. Known as much for his mystical landscapes as his…