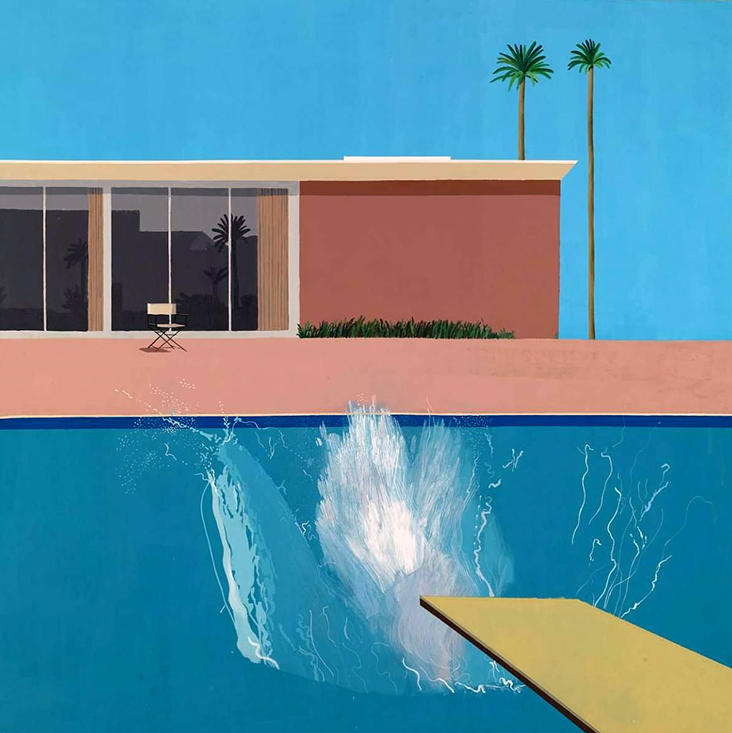 Bold, vibrant and filled with optimism, PACIFIC BLUE linen mirrors David Hockney’s dazzling, eye popping blues. Celebrated for his playful and adventurous colour palette, Hockney spent his early years as an artist living and working in LA. Moving between the UK and US in his later years, the vivid colours of California stayed with him and coloured his many subjects, from sunlit interiors to windswept British pastures, igniting in them a passionate and invigorating sense of life. “If you see the world as beautiful, thrilling and mysterious, as I think I do,” he wrote, “then you feel quite alive.”

Hockney was born in Bradford, England in 1937 to a modest family. An enquiring child, he loved devouring art books and his parents were supportive of their son’s burgeoning passion. In 1953 Hockney spent two years at the Bradford College of Art, before two-years of enforced military service. In 1959 he earned a place at London’s Royal College of Art, where he studied alongside Peter Blake, R.B. Kitaj and Allen Jones, and began painting in an abstract expressionist style. A popular and successful student, Hockney’s talent was soon spotted as he won a series of prizes and began selling paintings and prints to private collectors. 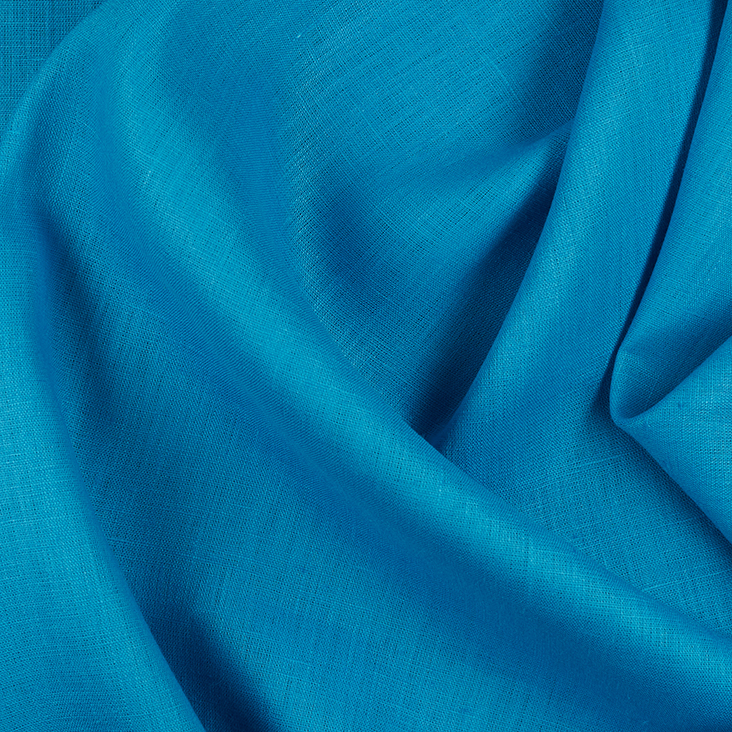 Early paintings from the 1960s featured literary or autobiographical elements, sometimes loosely referencing his homosexuality. An avid movie goer and an admirer of modernist architecture, Hockney was fascinated by Hollywood, and after completing art school in 1963 he made his first visit to Los Angeles. “I instinctively knew I was going to like it,” he remembered with affection.

The heat, intense light and “California modern” lifestyle entranced him and three years later he settled there for a longer period, making some of his most iconic works of art. Swimming pools reflected the polished life of leisure and luxury in wealthy Californian homes, and Hockney made a string of paintings in homage to them, sometimes forgoing figurative content to create sleek, streamlined designs. In the world famous A Bigger Splash, 1967, paradisiacal blue water reflects the cloudless sky above, while the foamy splash of water feels enticingly real. “Water in swimming pools changes its look more than any other form,” he mused, “its colour can be manmade and its dancing rhythms reflect not only the sky but, because of its transparency, the depth of the water as well.” 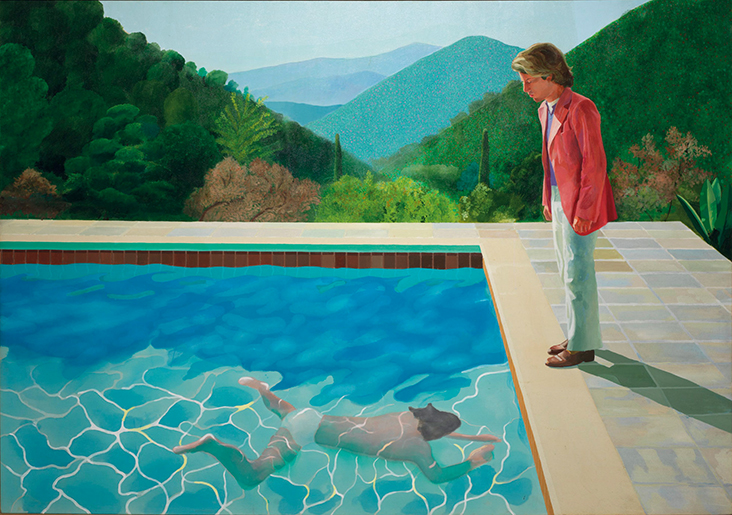 Portrait of an Artist (Pool with Two Figures) / David Hockney / 1972

Throughout the 1960s and 70s Hockney moved between Europe and the US, but Californian homes and swimming pools were a mainstay in his practice, painted with enduring blues that speak of endless summers. Hockney was also drawn to the subject of the double portrait in the 1970s, and made various portraits of his friends, as seen in Portrait of an Artist (Pool with Two Figures), 1972. Here Hockney paints his former lover, the painter Peter Schlesinger, standing fully clothed, while another, nearly nude male figure delves deep into the rippling blue water as it waves in and out of the sunlight, forming an aqueous patchwork of turquoise and cyan blue. 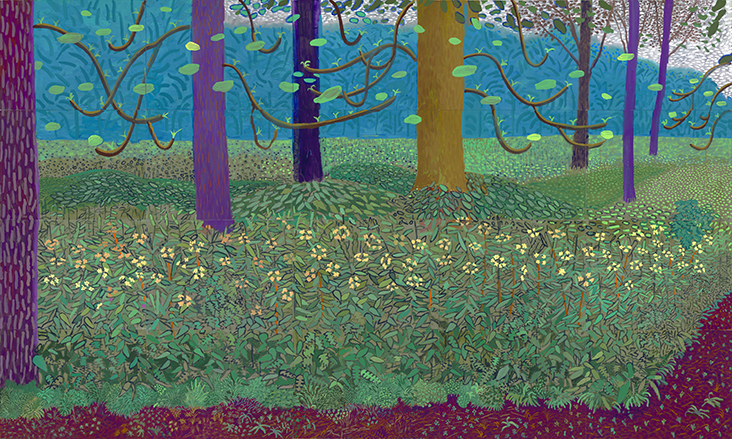 Hockney spent much of the 1990s experimenting with abstract landscapes and broken, faceted spaces. In 1997, he visited an ailing friend in Yorkshire and the experience re-connected him to the landscape of his youth. A series of vast, riotously bright British landscapes followed, culminating in the epically scaled display at London’s Royal Academy, A Picture Picture, 2012. Based on ipad drawings made on location, these works have the synthetic brightness of the Californian sun, transforming British countryside into kaleidoscopic patterns of colour and light. Under the Trees, Bigger, 2010 combines a rich blue backdrop with lush, floral undergrowth and vivid, indigo and ochre tree trunks, creating an enveloping feast for the eyes. 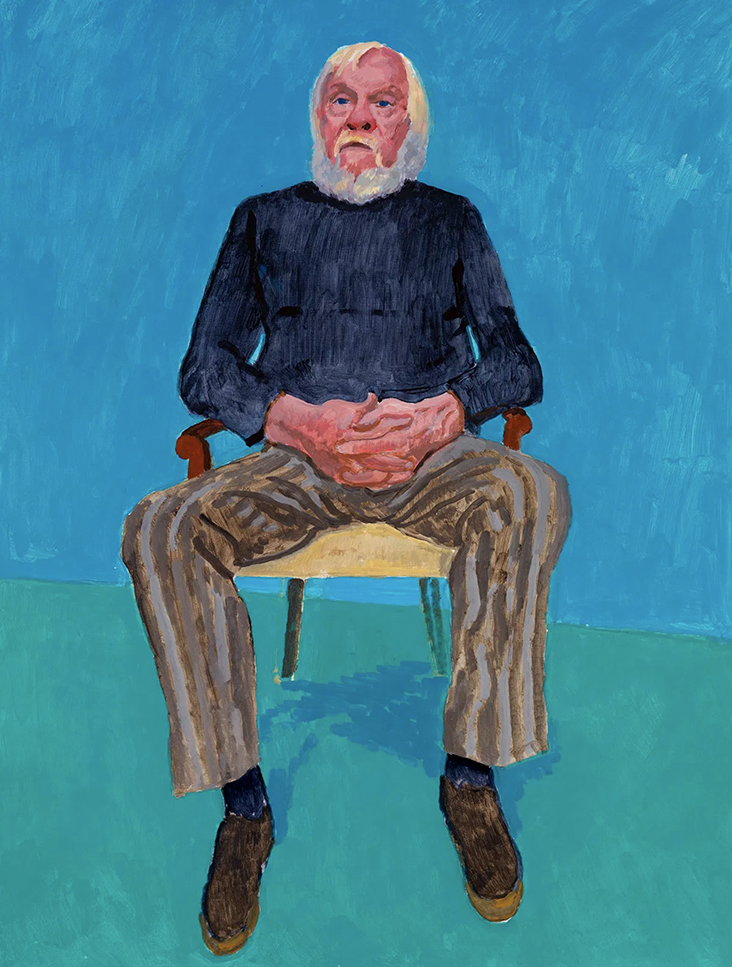 Returning to the subject of his beloved LA in more recent years, Hockney has produced a series of portraits that pay homage to the most important people in his life, including friends, family, and casual acquaintances, each sitting in the same red chair, against a backdrop in Hockney’s trademark LA blue. In both John Baldessari, 13th, 16th December, 2013 and Dagny Corcoran, 15th, 16th, 17th January, 2014, sitters have a quiet, approachable dignity, while painterly aqua blue streaks across the backdrop, as lucid and tranquil as a clear, sunlit pool.