In this series we set out to explore modern embroidery and celebrate stitchers and artists developing the craft, and helping to make it be taken more seriously. One artist, however, is turning it on its head and adding a little humor to the otherwise serious practice with a refreshing, lighthearted approach to embroidery. Richard Saja is an American textile artist based in New York and his company “˜Historically Inaccurate Decorative Arts‘ is making waves across the art and fashion world for subverting traditional toile and rewriting the fabric’s narrative with colorful thread and comical imagery. 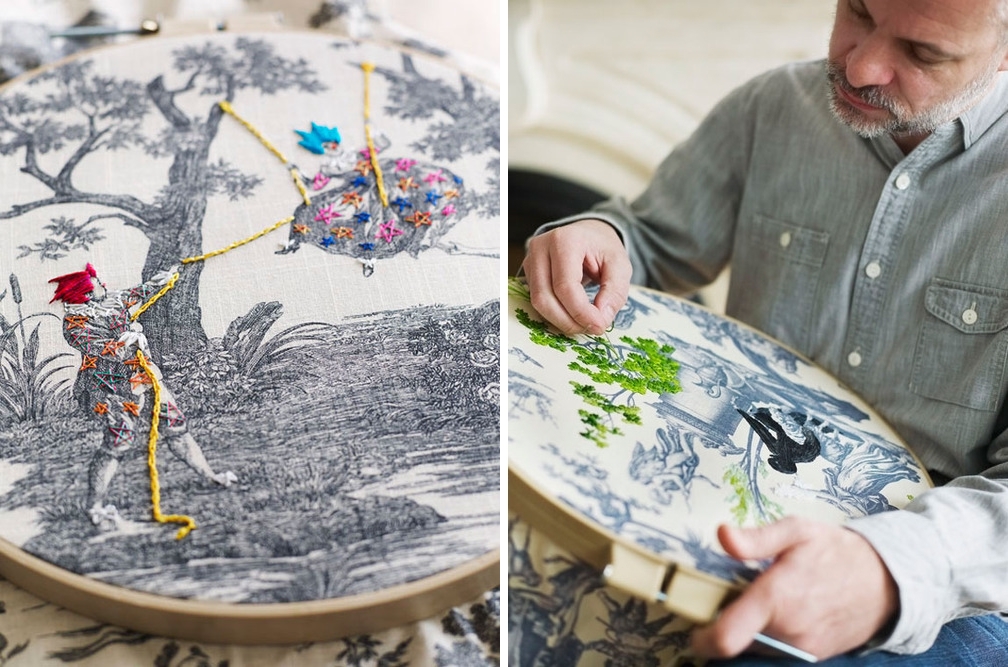 Saja’s embroidery uses the french fabric, toile de Jouy, because of its classic french patterns, which chronicle the lives of the bourgeoisie dancing, picnicking, gardening and boating as its foundation, but puts a spin of humor on them by adding his embroidered motifs to them.’ He uses the cloth as if it were a coloring book, stitching bold colors over the top of the neutral, pastoral and often bland scenes. The normality and quietness of the traditional toile are covered with clowns, sideshow characters, punk-rock ladies with mohawks and werewolves, depicted in colorful threads to produce his “œneo-toile”. The underside of the fabric has a somewhat ghostly appearance, which Richard has also exploited with glow-in-the-dark thread and his freakish imagery.

‘Has anyone seen my lighter?’ Photo: Richard Saja

Richard’s fascination with textiles comes from “œthe absolutely unlimited interplay of pattern, color and texture – there is no other medium where this trinity is so fully realized”. This love’ has roots in his family history’ – Italian woodcarver relatives in the 19th century as well as his designer’s assistant aunt, who he affectionately still refers to as ‘The Lady’. His creativity was nurtured as a child by The Lady until he found his metier, something which he is very thankful for. Richard began working with textiles in the late ’90s, after just having been laid off from an advertising job and was drawn to toile due to the way it presents a challenge – to keep it fresh and derive something new from it each time.

For Richard, toile is something of a “˜tabula rasa’, pages begging to be embellished with a story, drawn out this his embroidery. Toile when successful, although dense with imagery, is meant to disappear and function as pattern where no single element stands out more than any other. What Richard does is inverse the idea of toile, focusing on single motifs to be embellished and creating a whole new context: “œThe idea is to make one motif pop, and to make it cheeky and irreverent,’ One has to take a closer look, to spend time with the fabric, in order to unravel what’s going on”. Richard is very much into the spontaneity of the process – he may begin with general idea or a theme for a piece, but much of his work happens very much in the moment. 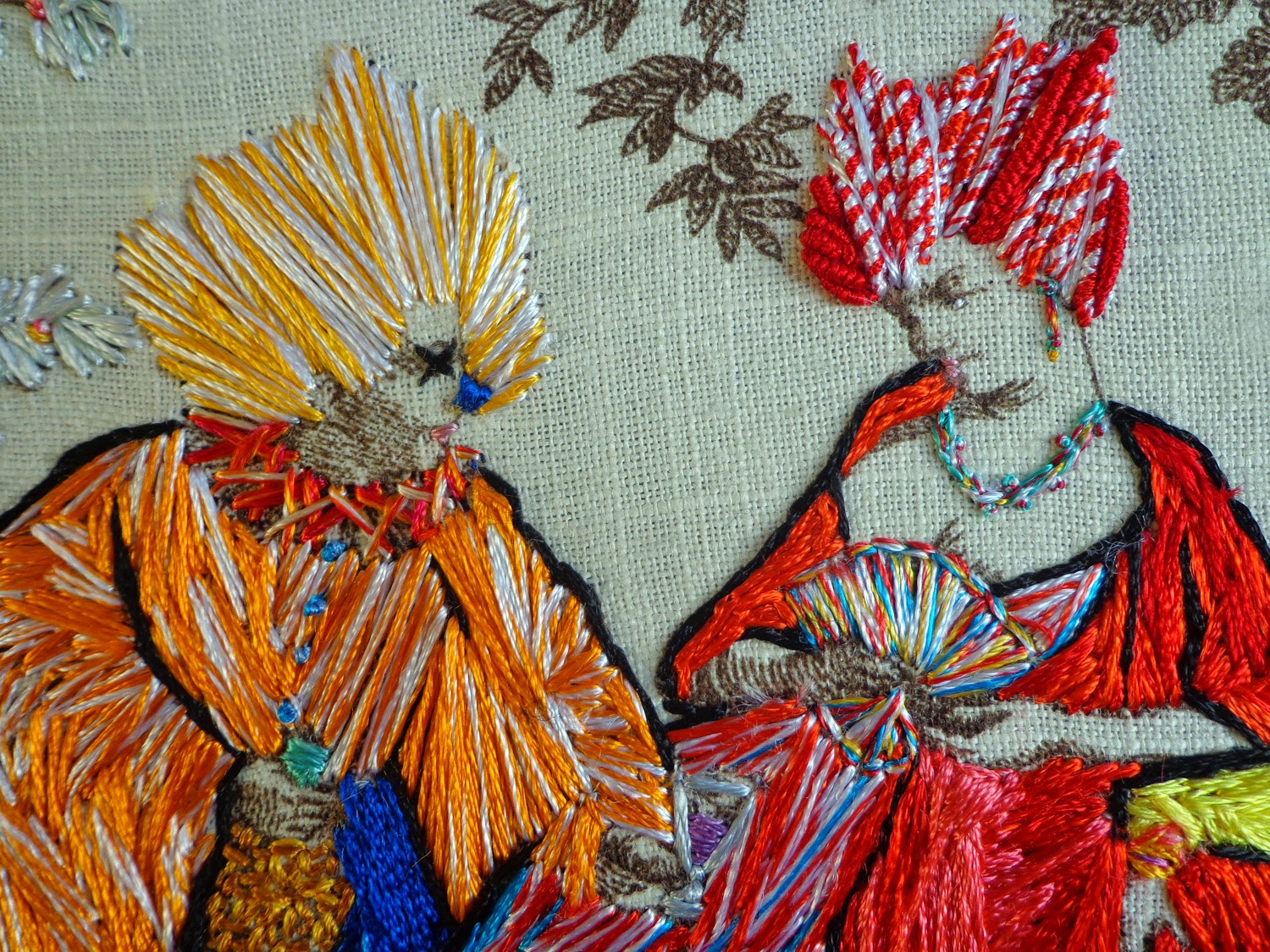 As far as expansion is concerned, Richard has made a pretty conscious decision to stay away from clothing and accessories, due to their perceived value and overall disposability. He has accepted offers of collaboration with large brands such as Opening Ceremony and Christian Lacroix that he felt were worthy of the time and effort he puts into his work. Richard says he is frequently approached by companies wanting something very specific who wish to hire him in order to realize their in-house concept,’  but he finds that very dull and uninteresting – “œI’m an artist, not a craftsman”.

Richard has been stitching for about 15 years now and has found that his technique has evolved over time. It has become much more labour intensive, coverage-wise and he has even developed a custom stitch. However, this labour-intensive aspect does not bother Richard – he finds that something great happens while he’s working akin to meditation were time passes very quickly – “œI love myself and just feel an inner thrum”. He’s currently working on two new toile patters of his own, each very different from the other. One is based on 1980s fashion, the other on German and Austrian Rococo engravings.

Richard’s artistry isn’t going without notice – he was offered a 2 person show exploring themes related to the Ottoman Empire and The Crimean War in 2013 and he was also awarded a grant from the Peter S. Reed Foundation. Richard also completed a larger scale, multi-media installation piece, which was a bit of a departure from his regular work, but something which he thoroughly enjoyed. He updates his blog regularly, featuring his clever work when it is finished. 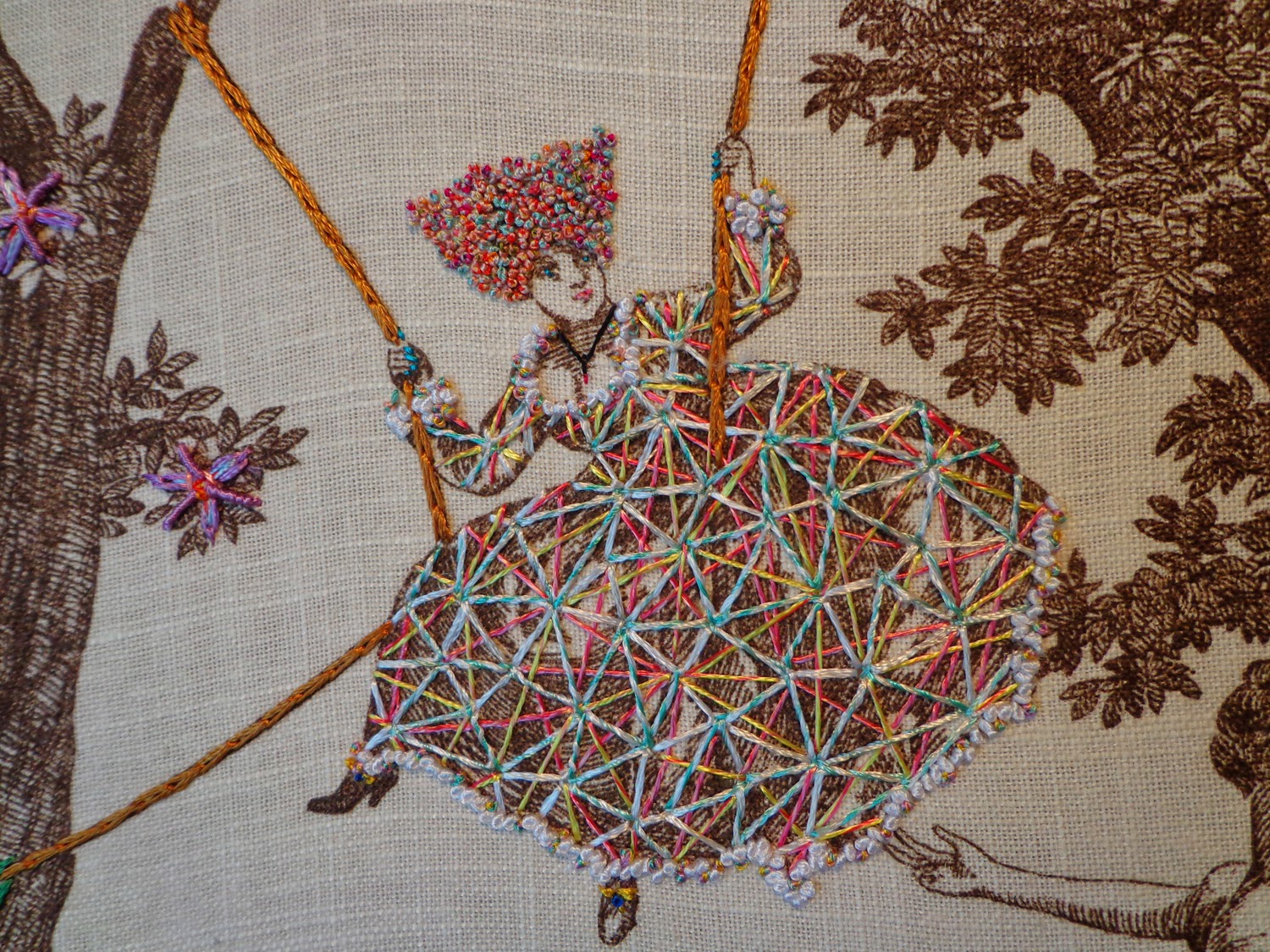 ‘This thing, I love it!’. Photo: Richard Saja

Throughout history textiles have been used by different people to tell stories of their landscape, heritage or cultural identity. We live in a globalized world and ever more multi-cultural society, but textiles are still being used to tell these stories in refreshing ways – Richard Saja’s work depicts a snapshot of our unique and quirky society, celebrating individuality through a beautiful, traditional medium. 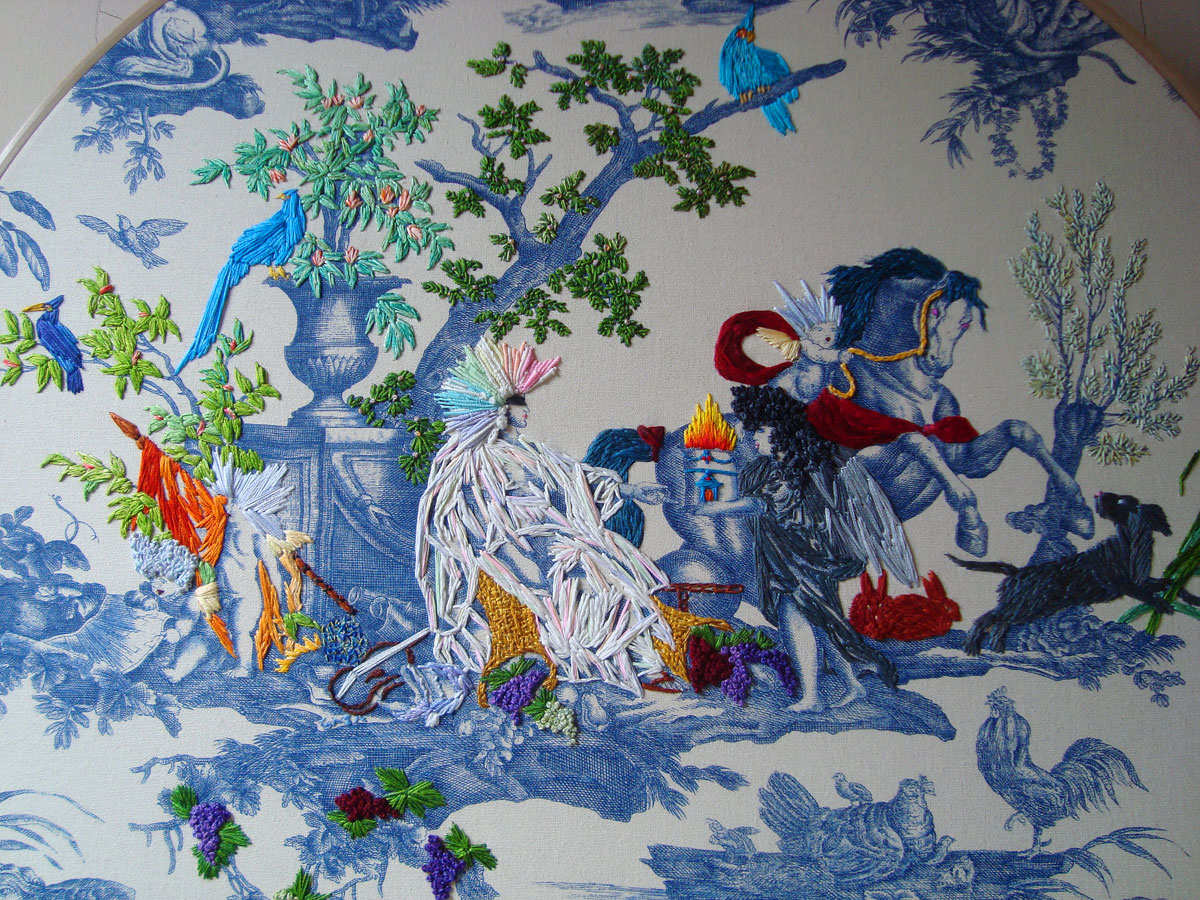 ‘…and a half-extinguished fire is soon relit’. Photo: Richard Saja