This post is the 3rd in a series about craftivism. If you missed the previous posts, you might want to check out the Introduction and Part I.

The second tenet of craftivism is beautification, or making your surroundings more beautiful by using your craft skills. As yarn bombing is what people think of first when they think of public craft, I’ve talked to one of my favorite yarn bombers for this post, and included a few others that make public acts of craft in different mediums. What they all do is provide people with a sense of color and fun where they live, providing them with unexpected bursts of handmade items that offer a bit of joy into their everyday surroundings.

The term yarn bombing was coined by writer Leanne Prain, who along with Mandy Moore, wrote Yarn Bombing: The Art of Crochet and Knit Graffiti. The book, along with the internet, helped propel yarn bombing into the minds of the crafting masses; making it something that people happily do all over the world. And in the spirit of yarn bombing, people have taken this craft-in-public notion to other mediums. 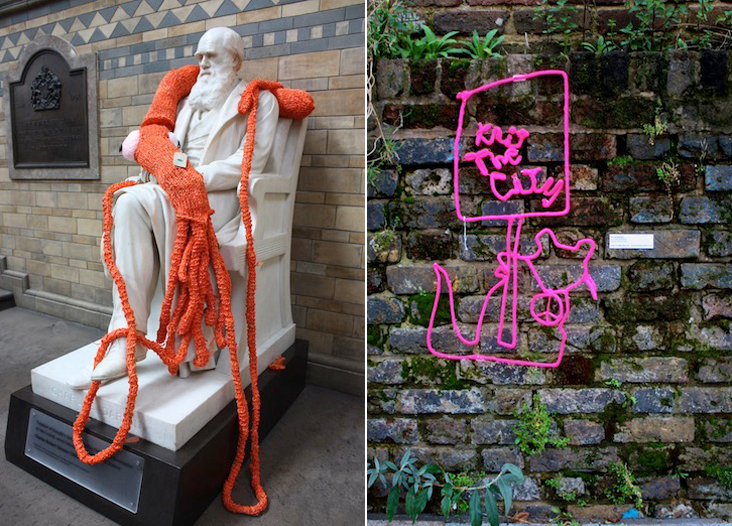 Two of Lauren’s works, the one on the left’ features Plarchie, a giant knitted squid who is made up of 160 Sainsbury’s carrier bags.’ Photos by Lauren O’Farrell

Lauren O’Farrell is graffiti knitter who started yarn bombing (or yarnstorming) in 2009, along with several other women in a group called Knit the City. I had pleasure of meeting Lauren in person when I was in London to give a talk a few years ago, and it’s been nothing but a pleasure to see her career grow over the years since. Much like traditional spraypaint graffiti, there is an air of DIY and reclaiming the streets with knit graffiti, and for Lauren, “fluffy as it might be, for me, my crafty street art is about the freedom to express yourself without needing the permission of the traditional world of galleries and exhibitions.” Part of doing this work means getting inspiration from everywhere, as she sees “the world [as] my art gallery” and “strongly urge[s] others to see outside spaces that way too.” 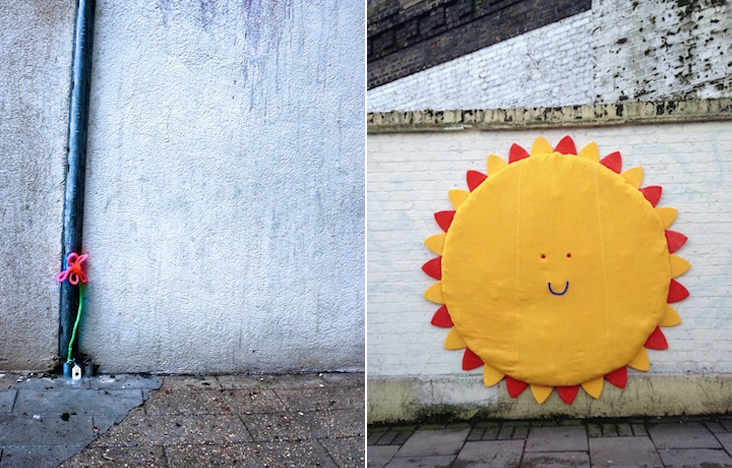 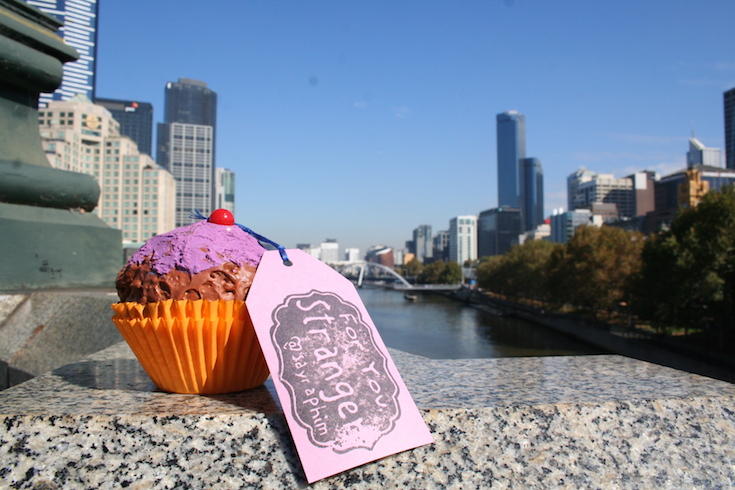 One of Sayraphim’s For You, Stranger cupcakes placed in Melbourne for someone to find. Photo by Sayraphim Lothian

Sayraphim Lothian calls herself a “public artist and investigator of playful engagement and experiments in guerrilla kindness.” She’ devises projects that add fun to your surroundings, creating a sense of play in your everyday environs. According to her website, “her main body of work” is “”˜Guerrilla Kindness’, [leaving] tiny handcrafted artworks out on the street for people to find and take home, injecting tiny, unexpected and magical moments in passers-by’s lives. They aim to remind people of the niceness of life, and rewards those who take the time to stop and look around them once in a while.”

For the project, For You, Stranger, fake cupcakes were left in various places with a tag stating the name of the project and Sayraphim’s Twitter handle, @sayraphim. Dropping the cupcakes, which are made of builders’ foam, spackle, and acrylic paint in cities and leaving them was a way to make cities welcome places where one’s sense of wonder comes alive. What I like best about Sayraphim’s work is her sense of wonder and play with it all and the fact that one gets to lovingly make items and then, with same sense of love and care, leave them for whomever may find them. 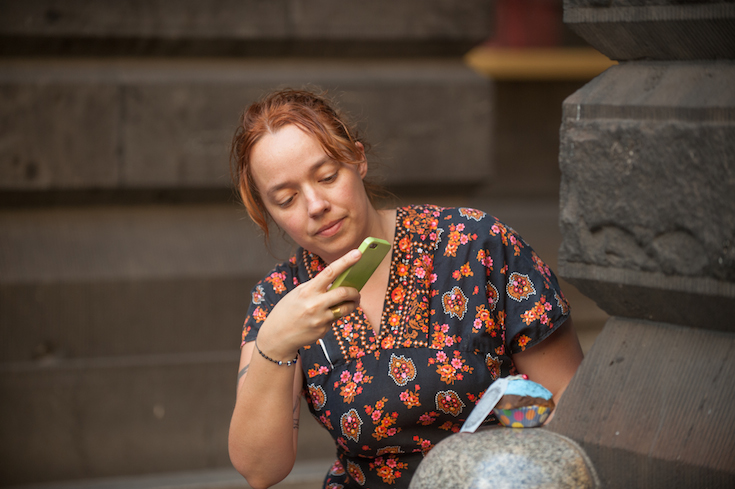 Sayraphim documenting a drop of one of her For You, Stranger cupcakes in Melbourne, Photo by Sarah Walker 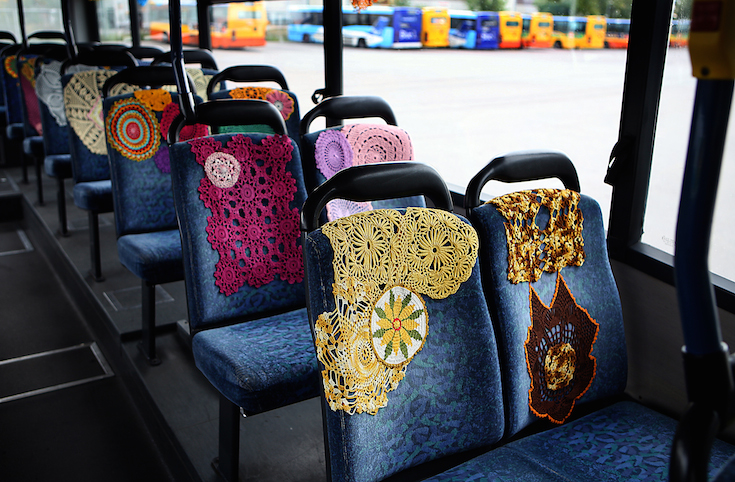 I first discovered the Finnish artist Virpi Vesanen-Laukkanen’s work several years ago when media everywhere was covering her project The Crochet Line in 2008. The Crochet Line was part of an exhibition with the Vantaa Art Museum, and was on a real bus that ran as part of a city bus line from September 2008 through January 2009.’ Ever since then, it’s been a perfect example to share in regards to how crafts can make everyday things come alive again. When I asked her about its reception, she said, “it was very positive. Passengers started to talk to each other. They thought back to their grandmothers and aunts who had crochet[ed].’ They also got ideas to learn to crochet themselves. Also the bus drivers liked to drive [it].”

I think that this reception is notable because it made riding the bus, which is normally rather tedious and tiring, a communal and enjoyable activity. 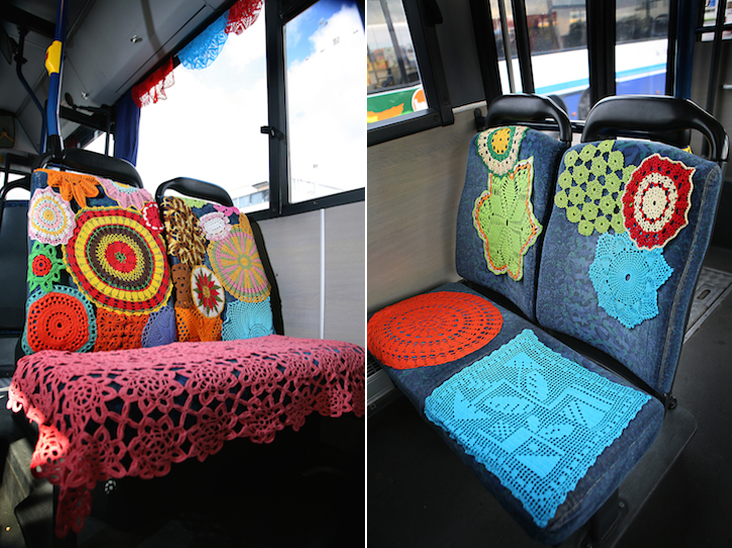 I’m sharing the projects above because I think that they all have something to teach those of us with various craft skills, that along with our work’s inherent beauty, it can also provide enjoyment to those around us. And enjoyment in the sense of play (unless we’re making toys or dolls) is not something frequently associated with craft; however, I think projects such as these provide examples of how the two can be connected.

As you’re walking around your city or stopped in your car at a red light or riding the bus this week, have a think about how you can use your sewing skills to make your city sparkle. If any related ideas in particular crop up, I would love to hear them!