In late 2000, I lived in New York City and learned how to knit. I just wanted to learn a hobby with which I could connect to others, I didn’t want to create a movement. But that didn’t mean I didn’t need to change my life. It wouldn’t be until later that I fully realized how much I needed craft in my life, but learning that new skill brought more into my life than I ever would have guessed. New friends, a new idea, and new conversations amassed just from learning how to make.

Women knitting for soldiers in Berlin during WWI, either in 1914 or 1915. (Okay, so my first knitting group wasn’t this crowded, but it was as awesome.)

That fall I found out about a knitting circle. I went with a friend, unsure of what to expect really. We ended up being welcomed into a brownstone and were taught by the group as if it were a round robin. One woman would show us one way to knit, yet when we got stuck she was nowhere to be found, so another knitter’ would step in. The women ranged in age from their 20s to 70s, something that seemed so unusual seeing that we were neither in school nor with family, groups that normally tended to be intergenerational. As a result, we left fulfilled, having been coached along by a grand and diverse succession of knowledgeable women.

I would sit on my couch and knit each night, trying to get the stitches just right. Inevitably, the final product (a kelly green scarf) ended up looking like it was done by a 6-year old, but I didn’t care, as it was made by me. Literally with my own two hands. ‘ I found space between the stitches. Space to think and recalibrate. I began to have real conversations with my grandmother again, as she told me about her own knitting. Suddenly, I was having conversations about making things with people that beforehand, I was never quite sure what to talk about with!

One night, on Halloween, I walked down to the end of my block, where the annual Greenwich Village Halloween Parade was passing by. The parade is a happy, somewhat raucous event, with lots of drag queens in glorious wigs and people wearing elaborate costumes. However, one part of the parade was a host of political puppets. It being 2000, the year of the presidential election between George Bush and Al Gore, someone had constructed literally larger-than-life political puppets of each man. As they came trundling down the street, the lively crowd became quiet. And once they had passed, the party began again, but something about those puppets stuck with me as I went back and knitted on the couch. 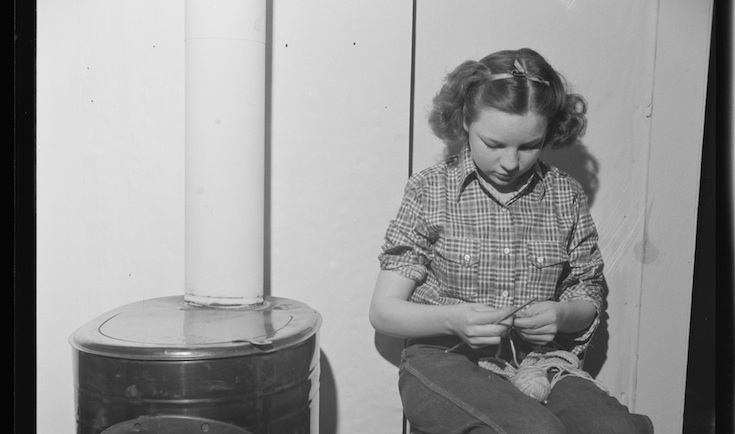 Moreno Valley, Colfax County, New Mexico. A rancher’s daughter knitting during a poker party at George Turner’s ranch, 1943. (Minus the stove, this is pretty much what I looked like on my couch.)

As I knitted away’ I began to think about how our craft skills could be used as a form of activism. It struck me’ that the relationship between the two created a more poignant experience than so-called traditional activism, which tends to rely on chanting and holding up signs. The puppets made an impact, quieting the loud party crowd to a silence, commanding a right to attention. As they slinked by, I questioned’ why they were constructed. ‘ This idea percolated in my brain for well over a year, and I didn’t return to it until I was thinking about applying for a grant and put this idea into writing as something I wanted to research.

One night at the knitting circle I had created (I had moved back to my hometown down south by then), I mentioned how craft and activism are related and could be used together and someone piped up with, “œYou could call it craftivism!” So I did. I went home and Googled the word to find that it had been used twice in the explanation of a workshop held by the Church of Craft. Soon after, I created craftivism.com as a platform to share my ideas. 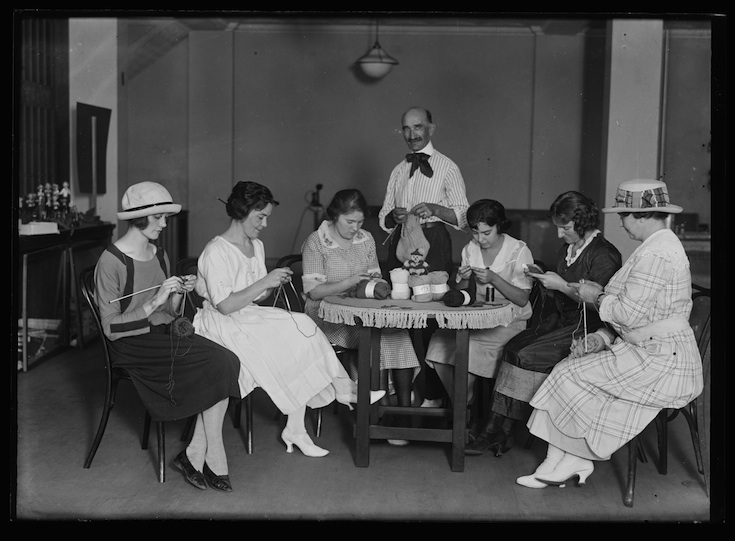 Photograph by Harris & Ewing taken between 1921 and 1932 (Our knitting circle looked kind of like this, only no overly enthusiastic man in an outstandingly devilish tie.)

Of course, my idea was not a new one. People had been fusing crafts and activism in various ways way before me, I was just the first one to start talking about it publicly under a new umbrella term that was coined in 2003. The more I talked about craftivism on the internet, the more people from all over the world came to use it. Right now, there are over 100K+ hits on Google for craftivism, up from 2 in 2003. At first I resisted coming up with a definition, as I wanted people to take the idea and personally run with it. Later I wrote a long definition for an encyclopaedia, however, it was quite unwieldy, so after being asked over and over for a shorter one, I came up with the following, “œCraftivism is a way of looking at life where voicing opinions through creativity makes your voice stronger, your compassion deeper & your quest for justice more infinite.”

As time passed, and people came up with their own craftivism projects, they began to splinter off into three distinct groups. Therefore, I came up with three basic tenets of craftivism in order to further break down what craftivism stands for. Over the next three posts in this series, I’m going to cover each one of them more in depth, but in brief they are: 1) donation (creating garments for other individuals who need them), 2) beautification (improving your local environment with handmade items), and 3) notification (making items that bring awareness to a cause, illness or issue). 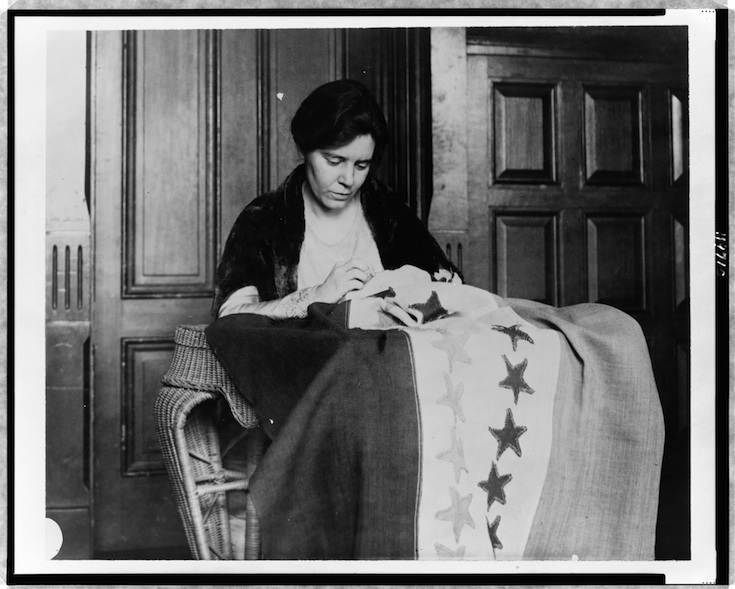 Alice Paul sewing the suffrage flag, sometime between 1912 and 1920

If you have a look online for craftivism, you’ll see that most examples are either knitted or embroidered. In part, I think this is because when I started this whole process, those were the crafts I favoured. However, I think there is a lot of room for sewing here, and would love to hear your ideas and examples for any (or all) of the three tenets in either the comments or via emailing me directly. The posts will be in the order listed above, and I’d love to share your craftivism ideas or photos (if you’ve completed any related projects!) with everyone in them!

In keeping with our nostalgic theme for this post, here is another historical example of people making things for donation to get you inspired. As an added bonus, they are also wearing rather majestical hats. 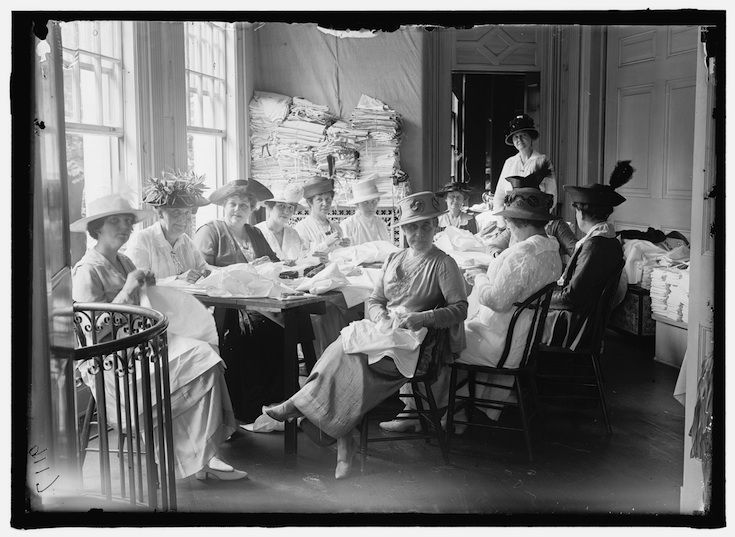