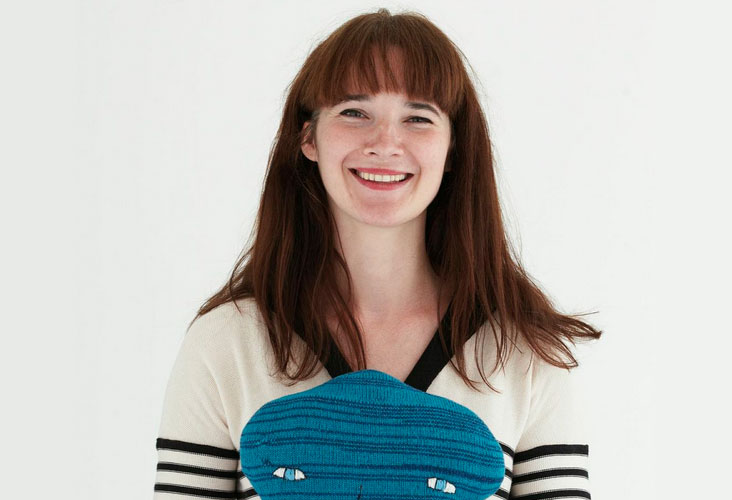 This week we got in touch with Donna Wilson and her PR team, who have kindly given us access to an open Q and A. We are very happy to publish some of her answers for you, as we were so eager to read her answers ourselves. Its always the personal stories that make any object one you can really fall in love with.

I first saw a glimpse of Donna Wilson’s knitted creatures at the East London furniture haven’ SCP‘ some years back.’ The odd creatures were immaculately made, bright, soft and silly, each with a name and a personality in tact, it was utterly impossible not to wish they could all come home with you. Since then, Donna Wilson’s collections have flourished, her business has grown from toys into porcelain, furniture, homewear and cosy animal knits for the whole family. In 2010 Donna Wilson became the ‘Designer of the Year” at the Elle Decoration’s British Design Awards. She regularly blogs about her life and work and there’s a general humanity to this woman, which makes her work so much more endearing and enjoyable to have around your home.

When did you realise you had a passion for design?

I think it was at quite a young age, I was always drawing and making things, and was always most happy with a pencil in my hand. I didn’t know what I wanted to be as a child, but knew it was going to be something to do with art/design. 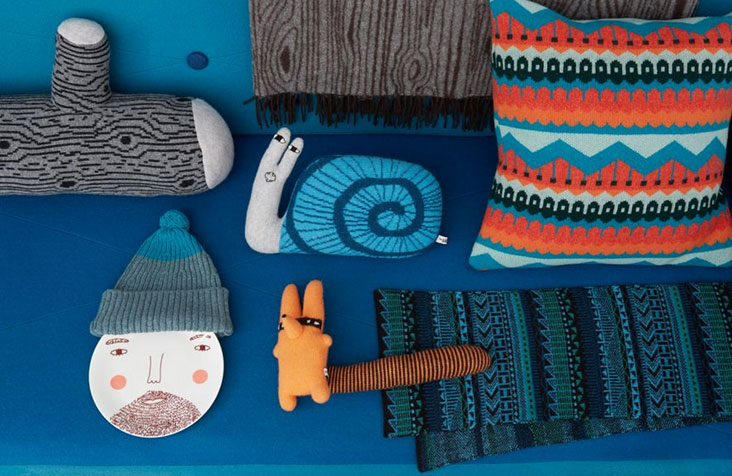 Where do your inspirations come from?

All over the place- the landscape, music, dreams, magazines, ceramics, Scandinavian’ design, people. Sometimes I just see a tiny snippet of something which triggers an idea, which is then developed into a product. I recently went to a small remote island off the coast of Newfoundland and came back feeling really inspired by its landscape of boats and houses, but normally I find inspiration everywhere, it can be a tiny piece of cloth, a picture in a book, or found object from my travels. Nature is also a big inspiration for me, particularly the plants and animals in the British countryside.

How do you start your design process?

I usually do sketches in a note book, they look like little cartoons, tiny bodies with huge exaggerated heads, I get their look and idea on paper ï¬rst, then start knitting, usually they turn out very much like the drawings but occasionally I’ll make some out of the scraps or off cuts, sometimes these rejects are just as successful as the planned ones. 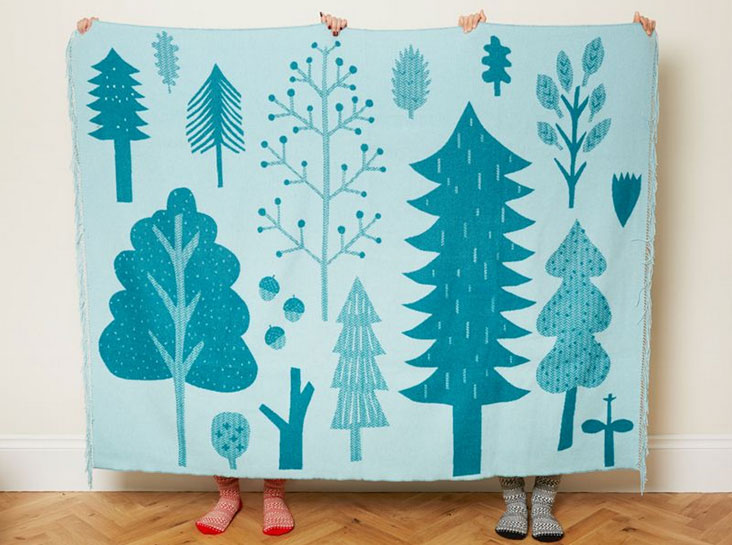 How did you get to where you are?

I studied Textile at Grays College of Art in Aberdeen and graduated in 1999. I then got a job in a knitwear company as an assistant designer for a year. After that I went back to college to do my MA at the Royal College of Art, where I specialised in Mixed Media Textiles. I had fantastic tutors there- Freddie Robins and Karen Nichol. At the RCA I started making products and sold them in shops like Couverture and Supra Girls London. They started off as the long leggy dolls and evolved into the slightly more disturbing knitted creatures with 2 heads or extra long legs, each with their very own character, the more peculiar the better for me. 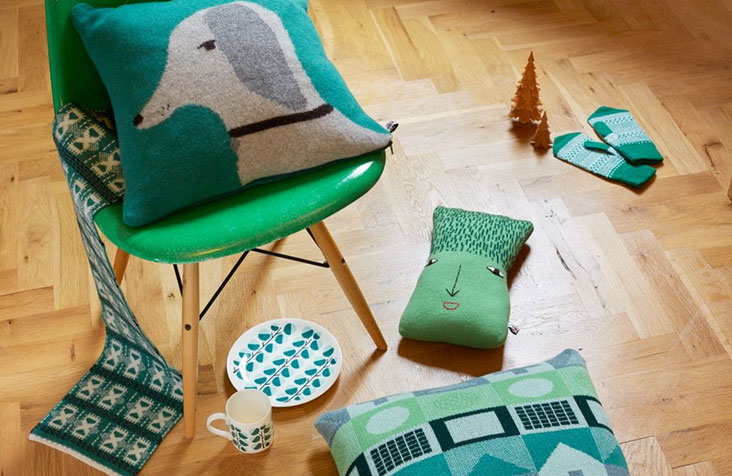 What has been the highlight of your career so far?

There has been so many highlights, working with a great team of people which help me to have the best job! Meeting designers like Rob Ryan and Orla Kiely, and making the creatures and props for a music video for Gideon Conn. It would also have to be winning the Elle Decoration British Designer of the Year award in 2010. 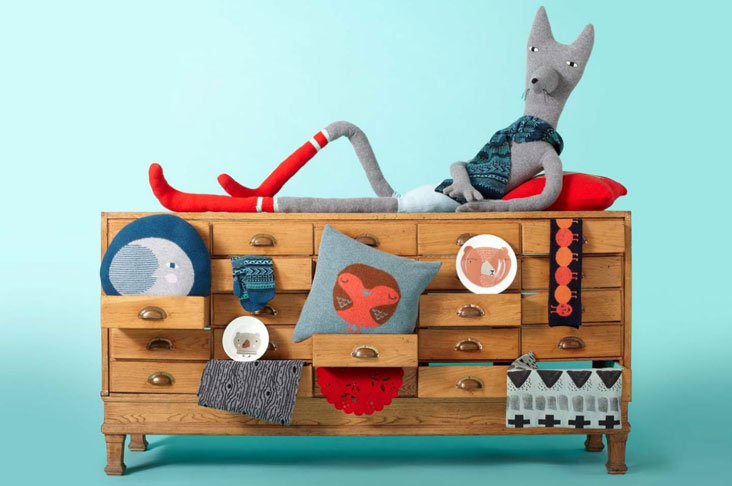 Which famous artists/designers do you admire or inspires you the most?

I like Alexander Girard, Stig Lindberg, My grandma!(but she wasn’t famous). Another designer I admire is Hella Jongerius – I love the sofa she did for Vitra a long time ago with the odd buttons! I’d never seen anything like this and I love the way she uses textiles and colour a lot in her work. Her designs are clever and thoughtful and have that human element.

What five words would best describe you?

Colourful, smiley (most of the time), messy, bendy, Scottish. 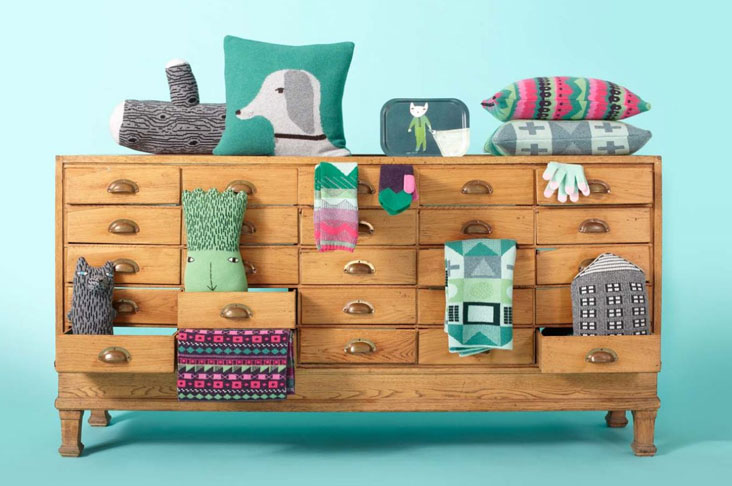 What was your first knitted creature? What inspired you to create him/her?

After the long leggy creatures I made the weirder creatures. I had a small family and I can’t remember which one came first, as they were all born around the same time: Edd Red Head, with the giant head and tiny body, Angry Ginger who was ginger with a hairy chest, Bunny Blue who had 4 sets of ears and 4 eyes, and Canibdoll, who was inspired by a story that was in the news at the time- a German cannibal advertised to find a mate to eat and he got a few applicants!! Although the creatures sound a bit gruesome, they were not scary, they were more collectable companions that people wanted to look after.

What does the job of a “˜knitting designer’ involve?

For my own business, I do a bit of everything, selecting colours, mood boards, designing making samples, production, marketing, admin, and everything to do with the day to day running of the business. I’m still learning as I go along. 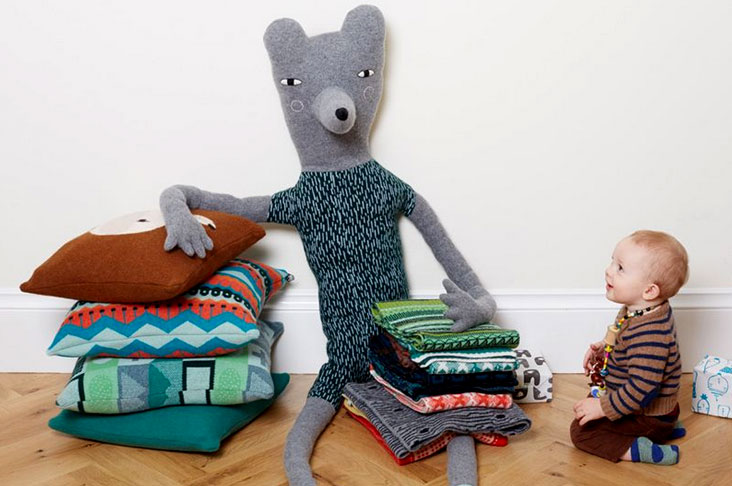 How did you go about establishing your online shop?

I had a website pretty much straight after leaving the RCA, I felt it was important for shops and customers to see what I did. The first site was very hand drawn and had a little animation of the creatures. I wasn’t trying to pretend I was a big company, I liked the fact that I was just starting out, and independent and could do small numbers and small quantities. The web shop took about 6 years to establish itself as a successful part of the business, It’s really fantastic now, but I like the fact that my business has grown very gradually and organically.

Do you have any favourite yarns you like to work with?

I always work with natural yarns, mainly lambswool, I love the colours you can get as well as its felting properties. 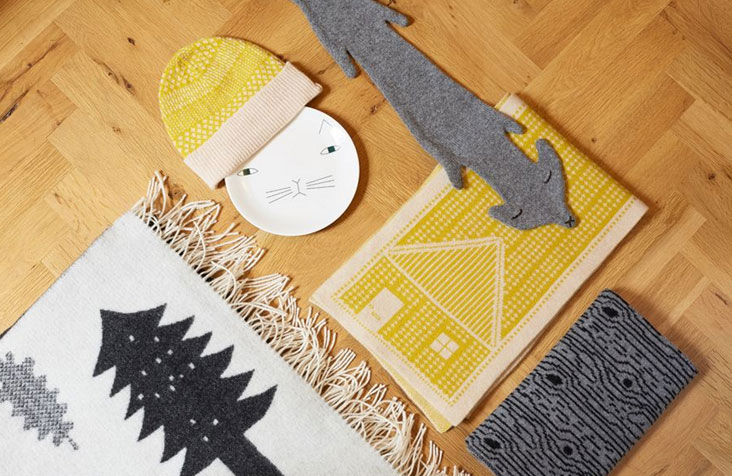 Is the crafted nature of your products as important for you as the design process?

Yes definitely. When I’m making them I have to use the same process for each type but because they’re made by hand, their form varies from one to another and when we get to the stage of stitching their features on, I create a new personality every time- embroidery is like drawing with a needle and thread. The proportions and placement gives each one a different look and that’s why I enjoy making them. People have asked me why I don’t get them mass produced, it would certainly be less time consuming, but for me I think they would lose their charm, identity and oddness.

Do you have a favourite knitting project you’ve worked on?

The knitted wedding was the most fun knitting project, organized by Rachel Mathews from ‘Cast Off’. Everything from the cake, sandwiches, dj’s microphone and even the confetti was knitted. I was a bridesmaid, and my job was to knit the 30-metre-long train.’ Luckily I had a knitting machine with a motor on it!

What’s the most challenging part of your job?

Managing the business side of it, and making the right decisions about what to spend our time doing. It’s also a part I really enjoy, as I never thought that I’d be good at it but as we have begun to have more success I think I must be OK. I want everyone to feel part of the company and us all to be motivated and inspired when we come into work.

What do you love most about it?

Designing, and I have only recently given myself a bit of time to do this. I used to design in my own spare time, and on the back of an envelope on the bus! But I have been spending the last few weeks making mood boards, sketching and trying things out on the machine, and I remember why I love it. Being creative is a fantastic feeling, and I’d recommend anyone to give it a go. I also really enjoy making things that make people smile!

What is your favourite product in your collection?

My favourite product right now would be the new pie chart patchwork blanket. I love the way it feels, the rainbow of colours, and the fact that it looks like a textile pie chart! It’s made by our seamstress Eva who makes patchwork quilts in her spare time. It’s such a lovely traditional process and this one looks really bold and colourful. I’d like to have on my wall! 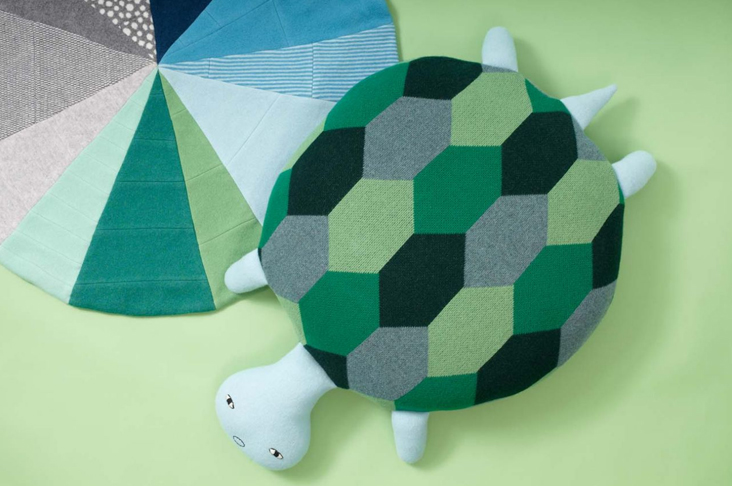 What is your favourite colour and material and why?

Green and many shades of it! And wool. I love working with wool and wearing wool. It’s such a lovely natural material and can behave in lots of ways. For example when you feel it, it can be quite thick and dense. You can dye it beautiful bright colours and it is so breathable so it can keep you both cosy and cool.

What are some of your favourite films?

Favourite films are anything by Wes Anderson – so the Royal Tenenbaums, Life Aquatic and so on. I love the way they are styled, the colour, the strange dysfunctional relationships! Also I love the director Michel Gondry. The Science of Sleep was so inspiring!!

Other posts by Masha Karpushina