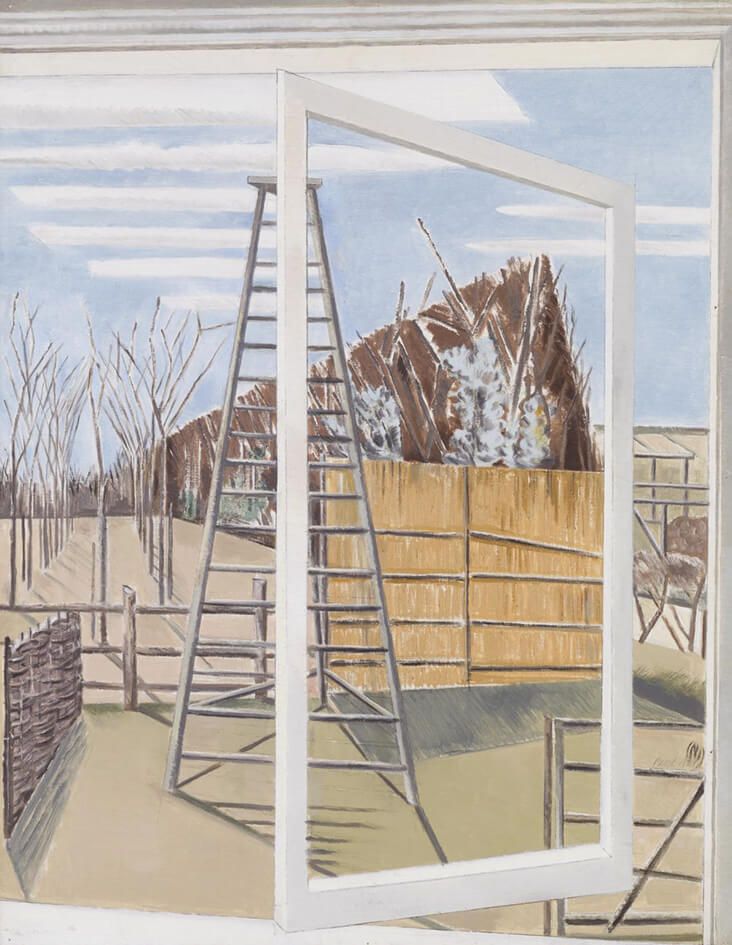 Cold, luminescent shades of silvery grey like PERFECTLY PALE ripple through British painter Paul Nash’s surrealist art, creating the ethereal atmosphere of a dream. Nash was one of a generation of English artists who brought European ideas around Cubism and Surrealism into Britain during the 1930s and 1940s, but Nash interpreted European styles of art in his own unique and distinctive way. He created a series of mystical, imaginary places where curious and uncanny stories unfold, painted in his trademark palette of pale, airy colours. Looking back in his later years, he said, “Imaginatively in a pictorial sense I was airborne.”

Nash was born in London in 1889, and grew up in the Buckinghamshire countryside in amongst wild, tangled and unspoilt countryside. After training to be an artist in London, Nash retreated back to Buckinghamshire for a brief spell, where he found the landscape an enduring source of subject matter. In his early career as an artist Nash drew and painted realist landscapes, but over time they became increasingly obscure, minimal and ethereal as he searched for the hidden qualities of mystery within quiet corners of the countryside. He said, “there are places, just as there are people and objects… whose relationship of parts creates a mystery.” 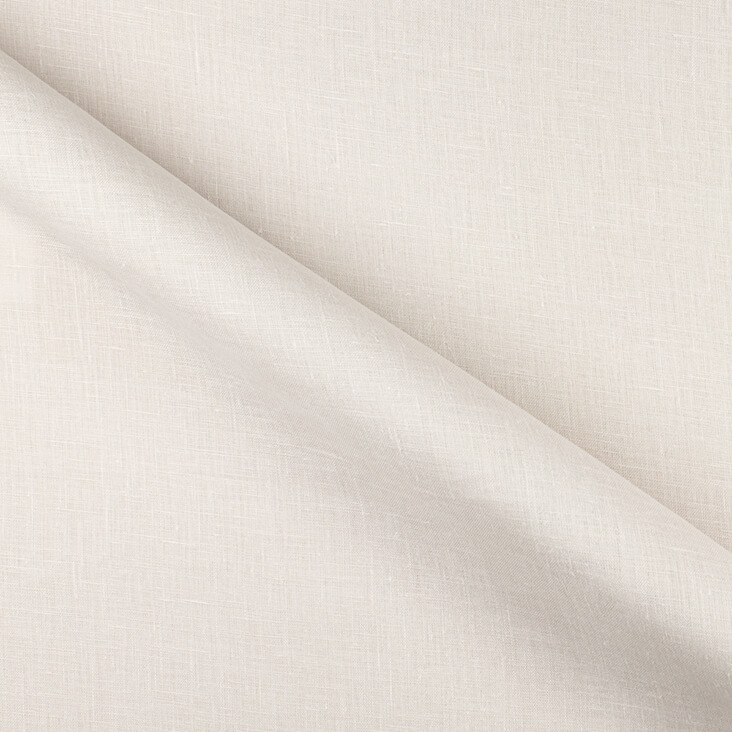 The year of 1928 marked a significant turning point in Nash’s career, when he began painting with what he called “a new vision and a new style.” The art of Italian artist Giorgio de Chirico had a particularly profound impact on Nash’s new art of the late 1920s. Like De Chirico, Nash began exploring scenes inhabited by strange objects and unusual, multiple perspectives, invoking the private worlds of memories and dreams. In Month of March, 1929, Nash paints the view out from his studio window at Oxenbridge Cottage near Iden in Sussex, where he was living at the time. Nash leaves the inside frame of the window just visible, letting it contour the edge of his design. Meanwhile a pushed open window pane forms another angled frame within it, a picture within a picture, which creates an odd an uncanny sense of perspective. Nash paints his window frames and the oddly geometric panels of cloud beyond them with the quietest, palest shade of grey, lending the image a shimmering, magical quality. 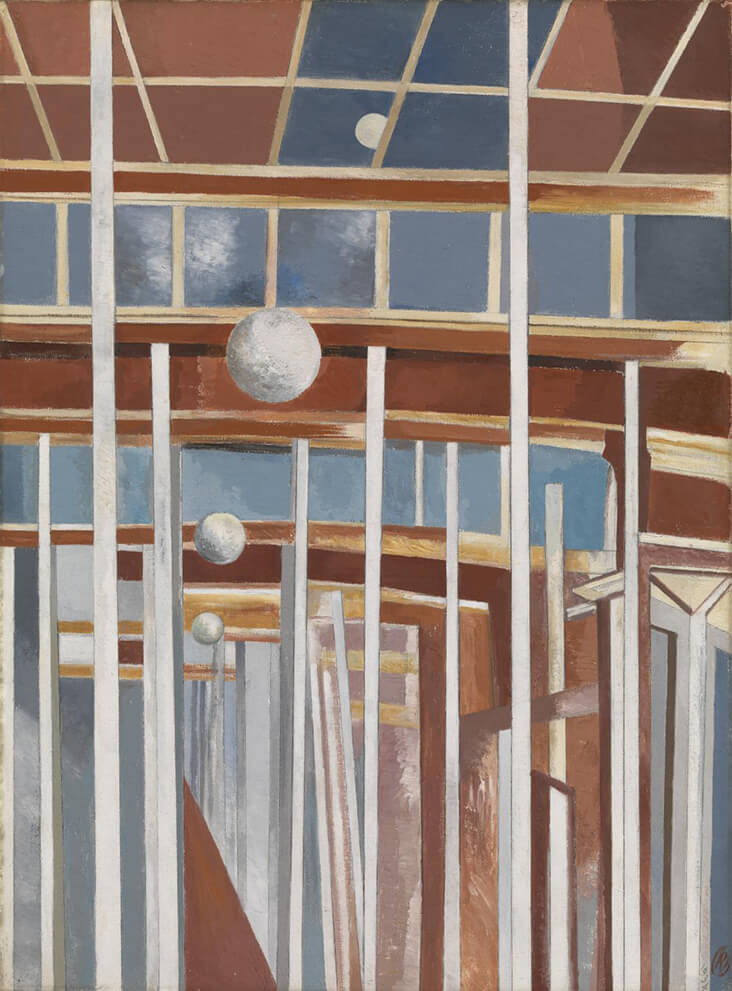 Several years later, Nash based the composition of his later painting Voyages of the Moon, 1934-7, on the circular ceiling lamps of a restaurant that reflected in the mirrored walls around them, creating the uncanny illusion of infinite space. Ever the daydreamer, Nash transforms the globe lights he once saw into a series of silvery moons that seem to recede into the distance. Around them, the odd angles of an imaginary architectural structure overlap to create a dreamy Cubist vision, while strips of silver wood are interspersed with warm rustic browns and patches of dark blue-grey that suggest the encroaching night sky beyond. 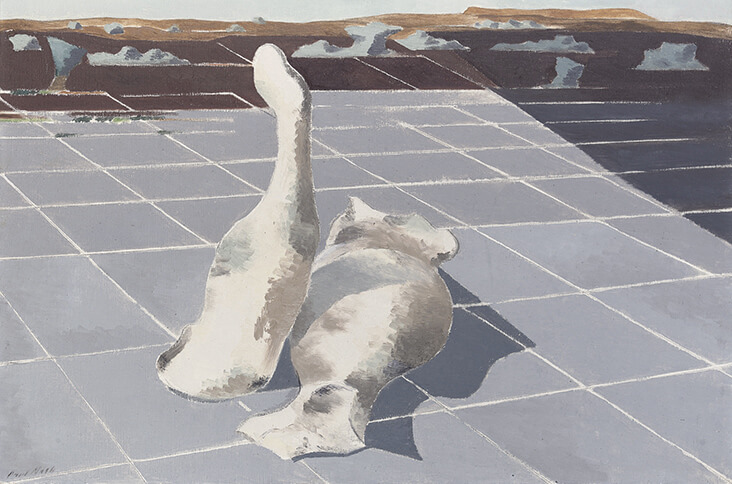 Encounter in the Afternoon, 1936, Christie’s

Nash’s painting Encounter in the Afternoon, 1936 also toys with the strangely magical properties that can be drawn out of real objects and places. While walking over to visit his friend Edward James at West Deans in Sussex, Nash found two curious pieces of flint on the ground, which he noted had a resemblance to birds. Thus, they became the two protagonists of a flat, gridded stage, which opens out from a low vantage point to a barren landscape beyond. Nash painted the bird-like flint stones with luminous shades of pale grey, making them stand out like two ghosts against darker blue-greys and rustic greens beyond. Nash had a particular fondness for strange objects like these, but he was careful in his selection process, writing, “To attain personal distinction an object must show in its lineaments a veritable personality of its own… it must be a thing which is an embodiment and most surely possesses power.”

Made a year later, Nash’s painting Equivalents for the Megaliths, 1937 has a similarly surreal, otherworldly quality, juxtaposing solid, ‘megalithic’ shapes with a tumbling landscape beyond. Nash paints this curious scene with soft, sandy shades of beige, grey and green, while luminescent pale grey illuminates the gridded panel in the centre, acting like a window, or even a gateway, into another world beyond our own.