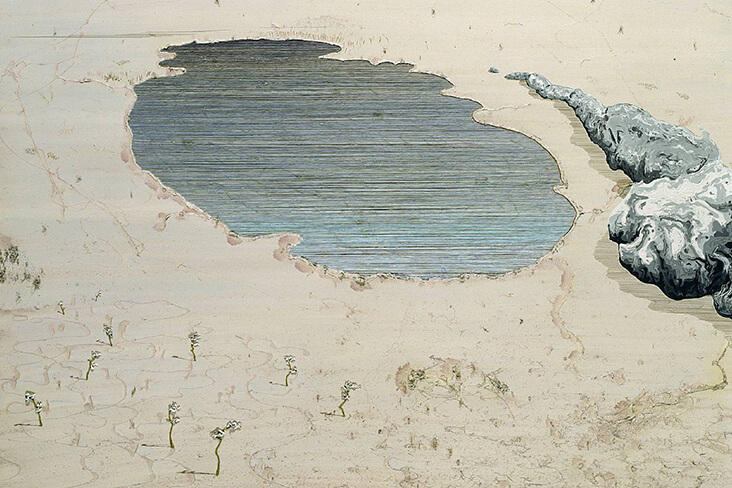 Dutch artist Michael Raedecker’s stylish contemporary art is a blend of mediums, merging painting on canvas with intricate areas of embroidery. His artworks have an eerie, haunting quality, combining loosely painted backgrounds with detailed areas of linear thread that describe desolate houses, sparse gardens or quiet interiors where no one is around. Sometimes the thread is in a high-keyed, contrasting colour, further highlighting its dissonance with the marks around it. Bringing thread into his art allows Raedecker to create tactile, sculptural qualities, but it also aids in his storytelling, referencing the domestic and suburban nature of his subjects. 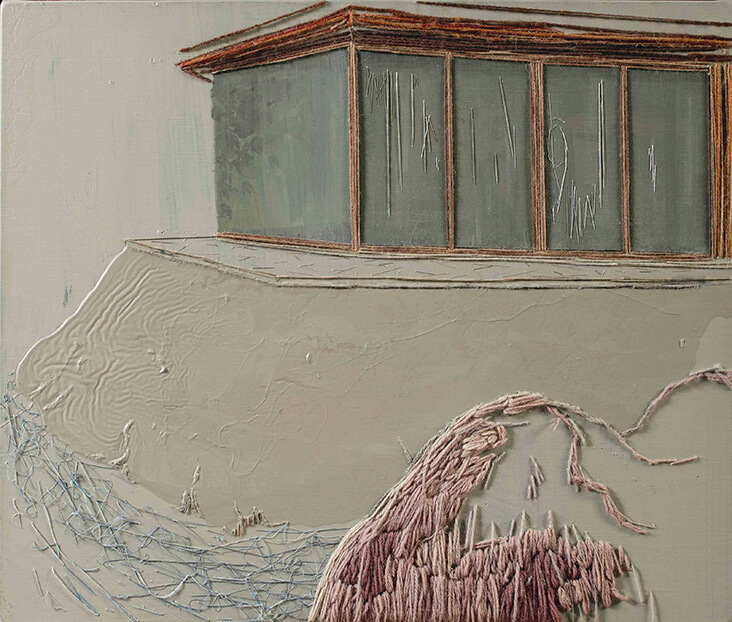 Born in 1963, Raedecker trained in fashion design at the Gerrit Rietveld Academie, Amsterdam, and this early strand of his training stayed with him, even as he moved on to train in fine art at the Rijksakademie van Beeldende Kunsten in Amsterdam, followed by Goldsmiths College in London. As a young graduate Raedecker considered a career in fashion, taking up an apprenticeship with the renowned Belgian fashion designer Martin Margiela, but it was a short-lived spell that he abandoned in favour of his own artistic practice. Since the early 1990s Raedecker has instead been incorporating his stitching skills into painting, experimenting with the ways it can enrich and enliven a painterly surface. He says, “Working with thread is something that’s become my technique. Using it is sometimes quite elaborate… I think of it like building… memory from the recollection of influences from the past, in the present, maybe even building the future.”

The subjects for Raedecker’s embroideries come from a huge variety of sources, including magazine excerpts, 17th-century garland paintings, vanitas themes and film stills. Bringing all these ideas together is Raedecker’s fascination with ordinary, suburban life, and the quiet undercurrents of unease that often run beneath it. In part, this is a reference to his own upbringing in a quiet suburb of Holland, but he also nods towards the 1970s television programmes set in sleepy areas of domesticity that he grew up watching. In this way, he says art is a reflection of “how I experience life.” Adding to this mix of imagery his unusual lighting, strange angles and low or non-existent horizon lines allows Raedecker to infuse an unsettling, sinister or voyeuristic quality to his art. 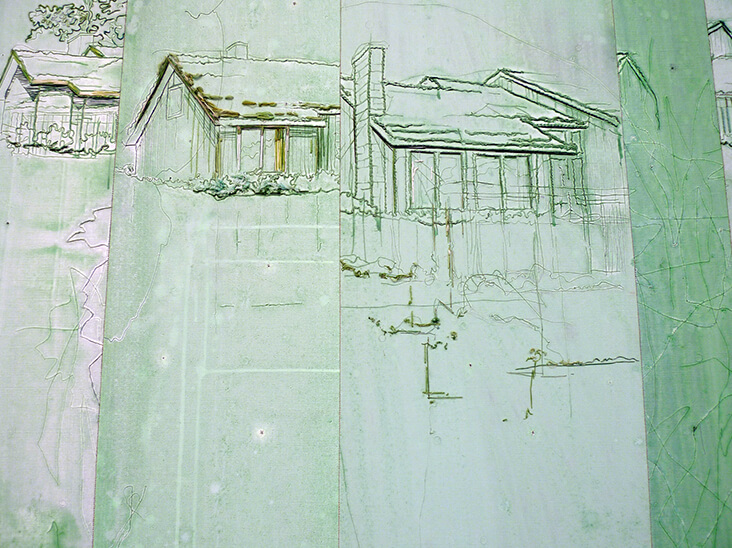 In his early career Raedecker used muted, naturalistic colours, applied in watery splashes or thick, congealed pools of acrylic paint on canvas. Into this surface Raedecker’s areas of thread become crisp areas of contrast, defining shimmering pools of water glinting in the light, as seen in Spot, 1998, or the hard edges of wooden buildings and rock faces in works including Away, 1998. This fusion of embroidery and paint creates the ideal balance for Raedecker, between homespun craft and fine art, as he explains, “I think if I had embroidered the whole image then I would go too far, it would really be too much like craft or folk art…” 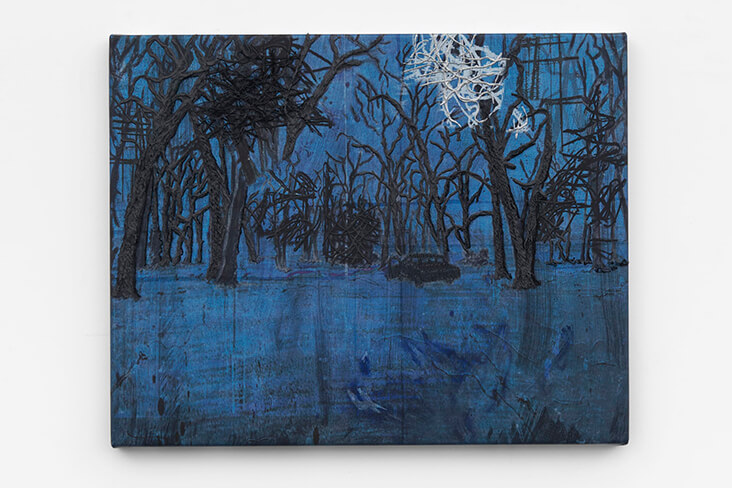 More recently, Raedecker has begun to work with a wider variety of colours, sometimes iridescent in tone. In Repeat, 2011, thin washes of mint green fill the entire background with an unusual ghostly light, while intricate stitches in a similar hue describe a series of cropped, overlapping houses. Here and there, Raedecker’s skilful stitches outline gathering moss in contrasting earthy greens, a quiet nod to nature’s slow act of entropy. In demo (unavouable), 2020, Raedecker introduces a deep shade of ultramarine, suggesting the dark recesses of night. Over this painterly ground Raedecker stitches in the black outlines of trees that criss-cross over one another to create a dense, almost grid-like pattern, while a tiny car in the distance has its door swung open, inviting us to imagine the unfolding of a sinister story.

Finery and Lace: Embroidery in Europe

From Viking Age clothing to Catholic vestments and prestigious royal gowns, European embroidery has a rich history that is closely intertwined with our cultural past. Europe was also a site for embroidery innovation; techniques that were discovered here continue to live on today in the clothes we wear and the ways we decorate our homes….

Indulgent and Ornate: Embroidery in India

The art of adorning clothing with embroidery has been an Indian tradition for more than 5,000 years. Its history is deeply embedded into the history of Indian culture, religion and daily life, and it is a tradition that continues to this day. Throughout Indian history embroidery has been there, adorning the homes of ordinary people…