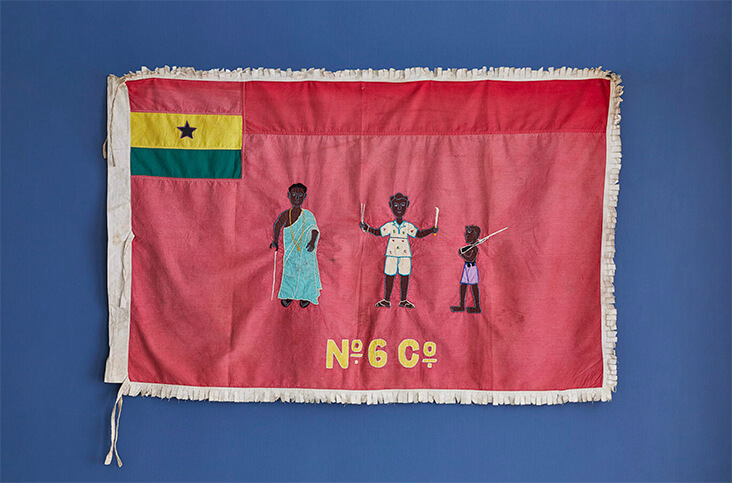 Asafo flags are embedded deep into the history of Ghana, and their legacy lives on today. They are a 3- or 400-year-old tradition from the Fante people of Ghana that has been passed down from one generation to the next since the 17th century. Flag makers throughout this long history have been gradually changing and adapting their motifs to suit the times in which they are living, yet the look of these flags, with striking colours, patterned borders and fringed edges is remarkably similar. Their function, however, has changed; while Asafo flags first emerged as a form of military regalia, this early association is now long gone. Instead, the Asafo flags of today are powerful symbols of national Ghanaian pride, telling stories about identity, community and belonging. In this third article on Asafo flags, we will look into their role and function in the past 100 years, and the way their aesthetic has evolved to suit Ghana’s changing political climate. 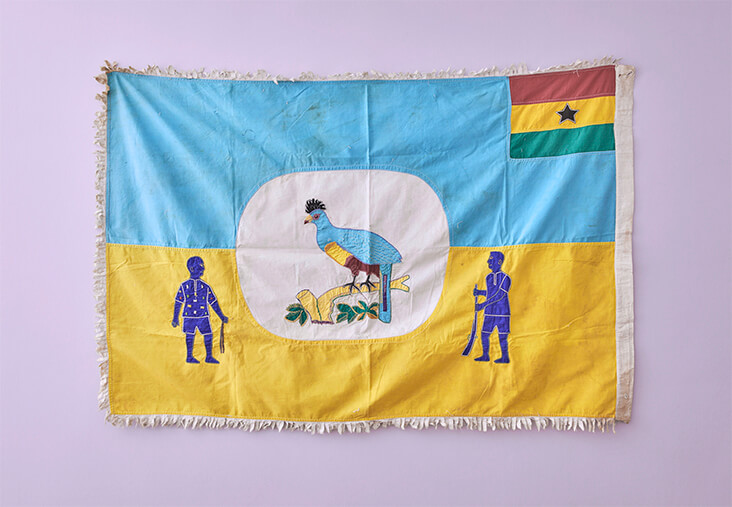 The role of Asafo flags in the 20th and 21st centuries has changed dramatically in many ways. The Union Jack flag was once stitched tightly into the top corner of Asafo flags as a symbol of British colonisation, but in recent years the Ghanaian flag has taken its place. This shift occurred when Ghana claimed independence in 1957 (a few flag makers do still retain the Union Jack as an emblem of Asafo tradition). The way flags are used has also evolved – once emblems for asserting political power and warding off military rivals, the flags are now reserved for festivals, ceremonies, funerals and other public events, flown high or danced with to celebrate the evolution of the Fante people and their village life.

Because they are no longer associated with the military, the messages Asafo Flags illustrate are less about demonstrating power and strength, and more about telling historical incidents or allegorical tales with a moralising message to community members. Individual flag makers are now also being recognised and acknowledged as artists, rather than anonymous spokespeople for the whole Fante group they belonged to. For example, Kwamina Amoaku is a revered and respected flag maker who ran the Anomabu workshop throughout the early to late 20th century. In his richly appliqued and embroidered flag Corn Pickers, he illustrates two corn pickers catching a thief trying to steal their harvest. In another of Amoaku’s flags titled Bird House, he tells a traditional tale from the town of Anomabo, in which the first hunter settling in the area found a rock covered in birds, and named this district Obonoma, meaning “rock of birds.” 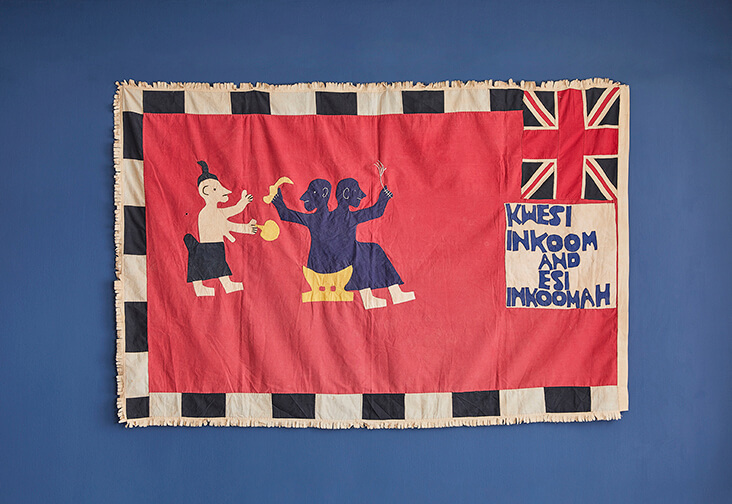 Baba Issaka is a more recent master flagmaker who lives in the coastal town of Swedru in the Central Region of Ghana, and he predominantly makes flags for festivals and public occasions. He says, “My father taught me this trade when I was 10 years old and this has been my livelihood ever since.” Issaka worries that Asafo flag traditions are a fading art, noting how fewer apprentices have the patience to sit and learn the skill. He remembers, “I had an apprentice for two weeks who wanted to learn the skill of flag-making; he gave up after two weeks.”

Since the 1990s Asafo flags have become increasingly popular with collectors beyond Ghana, and perhaps it is this rising interest which will help keep them alive for future generations. British curator Barbara Eyeson has been avidly collecting Asafo flags for over 10 years, after discovering her own Ghanian family connections to the tradition. She is now the creative director of Asafo Flags, a company dedicated to the collection, preservation and promotion of flags past and present, as well as offering encouragement to new flag makers of today. 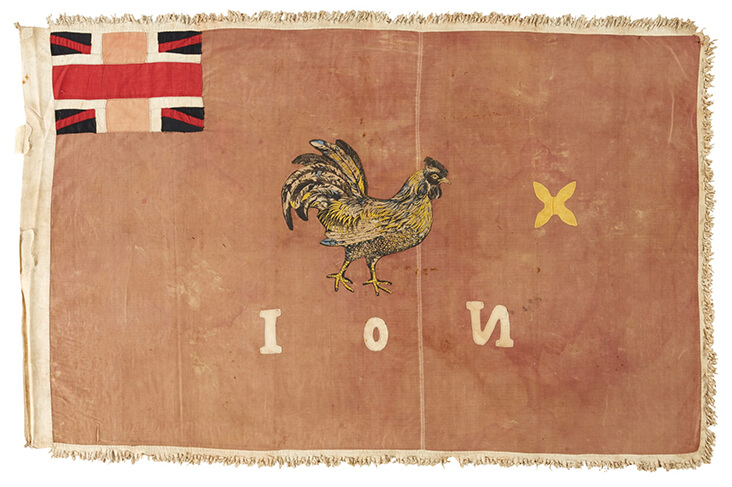 She says, “I’m working with the flag makers now to make new ones, as opposed to just, you know, everybody scrambling for the old ones.” Eyeson notes how Asafo flags are held in various prominent public collections, including the Smithsonian, the British Museum, Canadian Museums, and even one of the business class lounges of Heathrow Airport. She sees this exposure as potential for a new brand of Asafo flags to emerge, perhaps in a wider context, noting, “I think (they will) probably… come back in a different way, not so much in a… traditional way, but (they) will be more represented and respected… outside of Ghana.”