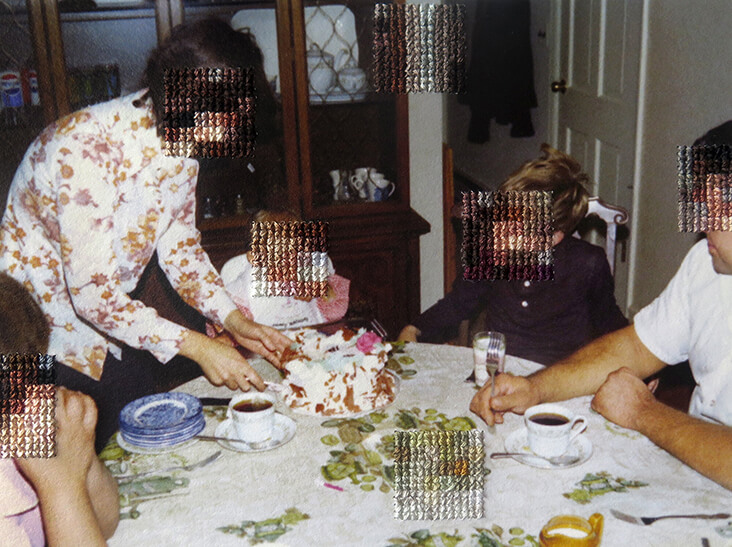 New Jersey XIII, 2016, from the series Time Spent That Might Otherwise be Forgotten

It’s a familiar scene; family members crowd expectantly around the dining table watching as a birthday cake is cut into slices. But this is no ordinary, nostalgic snapshot – instead, faces are partially concealed by pixelated grids of embroidery, rendering them as fuzzy and unrecognisable as distant memories. This artwork, titled New Jersey XIII, 2016, from the series Time Spent That Might Otherwise be Forgotten, is a fitting introduction to American photographer and embroidery artist Diane Meyer, who brings cross-stitched grids into her own photographs, miming the colours of the image below. On one hand, combining photography with embroidery is a balance of opposites – photography as a clean, mechanical process and embroidery- the tactile work of a human hand. But by embroidering pixelated grids onto her photographs, Meyer also highlights how both types of image-making are constructed with the same patterned rows and grids of colour. 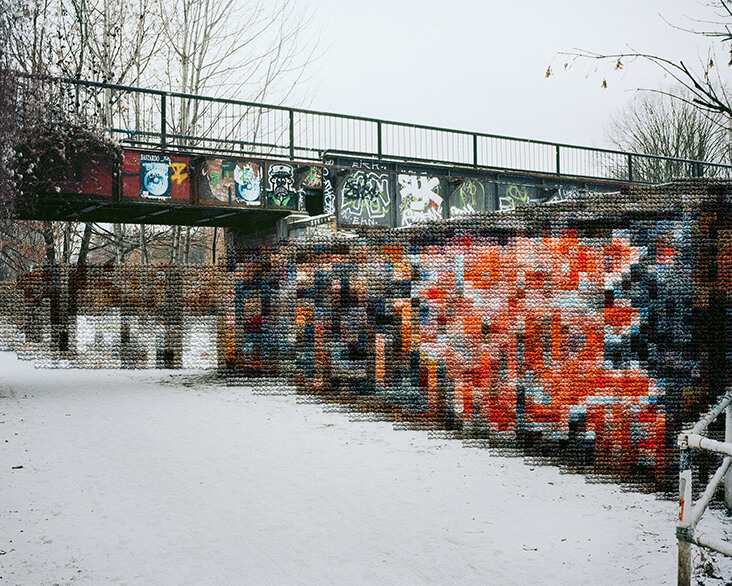 As a young artist, Meyer trained as a photographer in New York and San Diego. Meanwhile, cross-stitching was a technique she had been taught from her mother as a child, and she carried it with her into adult life. These two disparate interests were initially kept apart, as Meyer explains, “While I always liked the slow, meditative quality of it, it was something that I initially kept pretty separate from my studio practice.” In 2011 Meyer first began incorporating elements of embroidery into her photographs, simply as a means of bringing a slow, analogue technique into her way of making art. But as she developed the process, she became increasingly aware of how she could use cross-stitch to produce pixelated patterns in the same colours as the images below. The end result transforms Meyer’s original photographs into tactile objects with a dense, sculptural quality. There was also a quietly muffling, obscuring process that took place, investing ordinary photographs with an unexplainable intrigue. 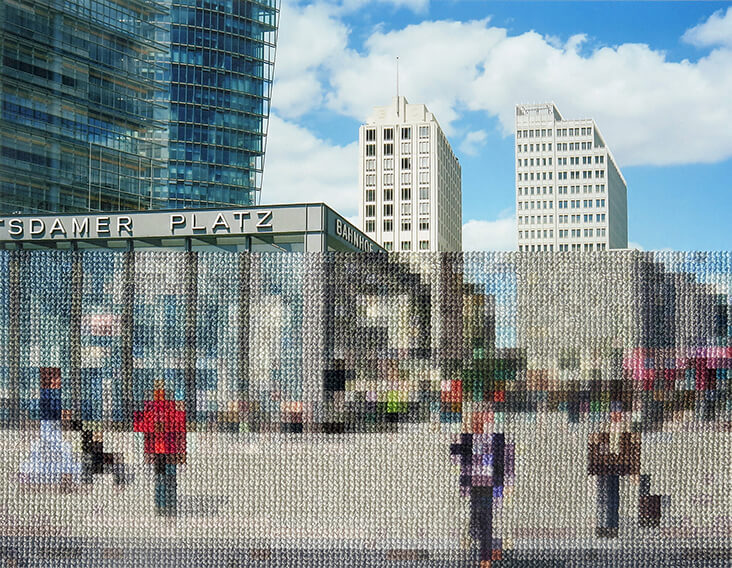 Potsdamer Platz, 2017, from the Berlin series

Since 2011, Meyer has been exploring her embroidered photographs in two distinct bodies of work. One is based on a trip the artist made to the German city of Berlin, a place still so loaded with painful memories of war and separation. During this trip, Meyer took a large number of photographs that track the rambling 104-mile path of the Berlin Wall from the centre of the city out into the surrounding suburbs.

Meyer coloured her Berlin embroideries to match the photograph below, a process she says, ”deteriorates the original photograph and forms a pixelated version of the underlying image”. But in many works in this series, she also deliberately scaled her embroidered passages in wall-like formations, so they mimic the scale and location of where the Berlin Wall would once have been. We see this process at play in both Landwehrkanal, 2014 and Potsdamer Platz, 2017, where the embroidered panels are made in blocked out areas, acting like ghostly relics of the not-so-distant past. Curator Claudia Bohn Spector observes how in this series Meyer’s, “stitching pierces the photograph as it heals and conceals the historic fabric to which it alludes, providing a poignant contrast to the unyielding brutality of the Wall itself and reminding us of both photography’s and history’s considerable artifice.” 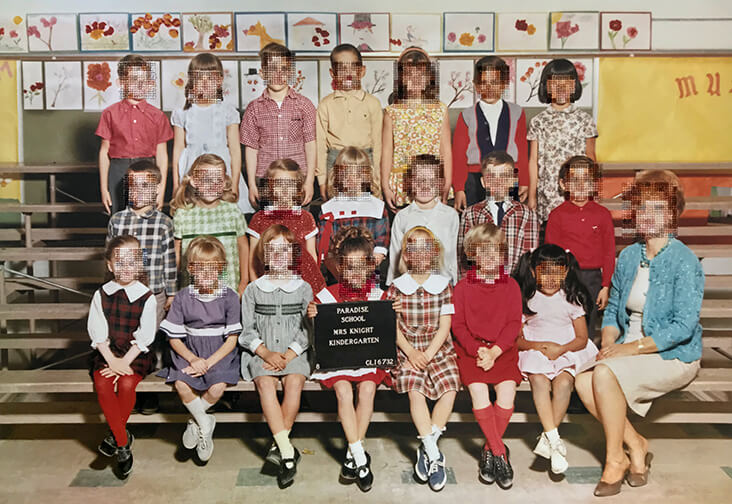 Paradise School (Class One), 2018, from the Reunion Series

The other series Meyer has been working on alongside this one is loosely based around nostalgic images, some from her own past, including family snapshots (as seen in New Jersey XIII, 2016), as well as found, posed photographs of strangers participating in universally important events that many of us have taken part in, such as school class photographs, as seen in Paradise School (Class One), 2018. In this series, Meyer covers up faces with passages of embroidery, rendering what might be the most important part of the image entirely mute. Instead, we are left to impose our own ideas onto the remnants left behind, relating them to our own life experiences. In this act of depersonalisation, Meyer critiques the way flat photographs have become replacements for our memories of lived experience and reminds us that they are ultimately just a one-dimensional, pixelated rendering, which is far removed from real life.