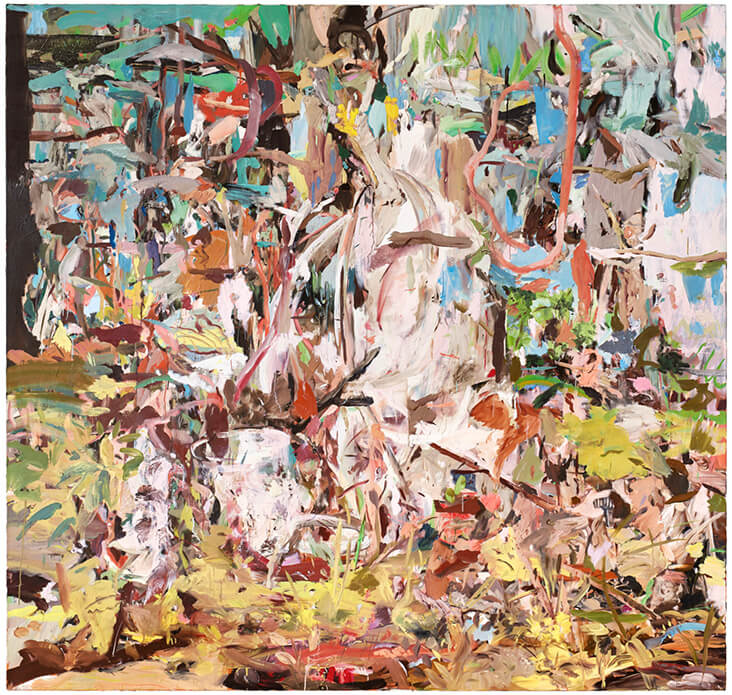 I Will Not Paint Any More Boring Leaves, 2004, image courtesy of Christie’s

Soft, delicate pinks like BLUSH linen are a recurring feature in Cecily Browns rich, expressionistic paintings, conveying nude flesh, spring blossoms in the sunlight, or freshly fallen snow, painted with the fluttering decadence of the Baroque era once led by Jean-Honore Fragonard. A leading New York artist since the early aughts, Brown has been painting near-abstract canvases for several decades, exploring how viscous, wet brush marks can convey the flurried movements of bodies and nature, as if caught in a state of constant flux. She says, “[I]t’s about looking and what you get from allowing the imagery to shift. and change. There isn’t a final destination.” 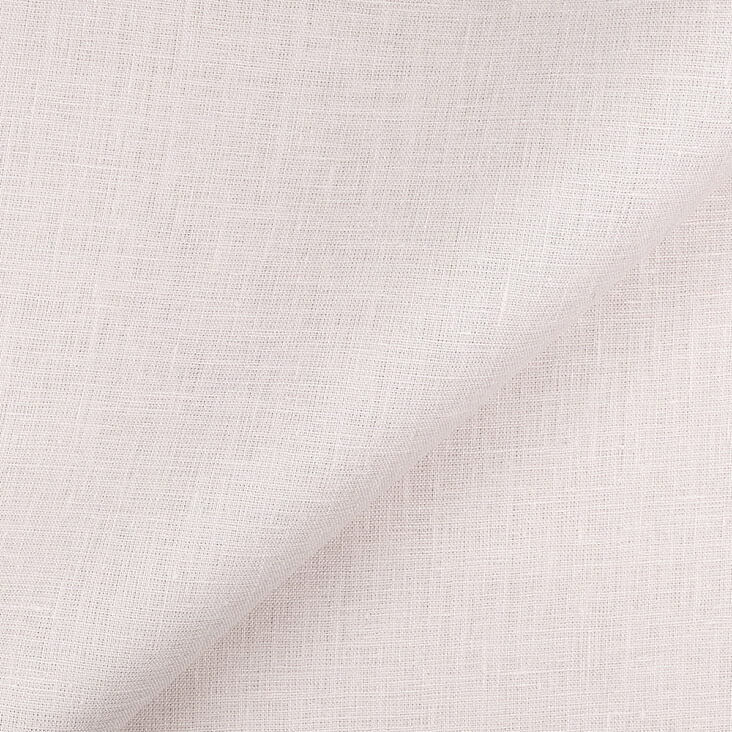 Brown was born into a creative family, and her career as an artist seemed almost pre-determined. Her father was the eminent art critic and curator David Sylvester, and her mother Shena Mackay was a Booker Prize nominee writer. British post-war painter Francis Bacon was a family friend, whose contorted, figurative work made in indulgent fleshy tones profoundly shaped Brown’s way of approaching her own art. Brown began training in London at the Slade School of Art, later moving to New York, first as an exchange student in 1992, followed by a permanent relocation. It was here that Brown would make her name as an artist in the late 1990s.

In her earliest notable paintings, Brown painted bodies caught up in highly eroticized moments of ecstasy, set in amongst idealized gardens of lush, abundant plant life and soaring blue skies. She took as much inspiration from the Baroque hedonism of Fragonard as Bacon’s Surrealist contortions. Later, Brown moved away from such direct and graphic material into a language that was closer to De Kooning’s fleshy Abstract Expressionism, suggesting flashes of bodies, animals, plant life and animals through rippling brushstrokes and the intoxicating intensity of colour, be it pale ice cream tones or dark hedonistic treats. She has said, “I often avoid using the terms ‘figuration’ and ‘abstraction’ because I’ve always tried to have it both ways. I want the experience of looking at one of my paintings to be similar to the process of making the painting – you go from the big picture to something very intense and detailed, and then back again.” 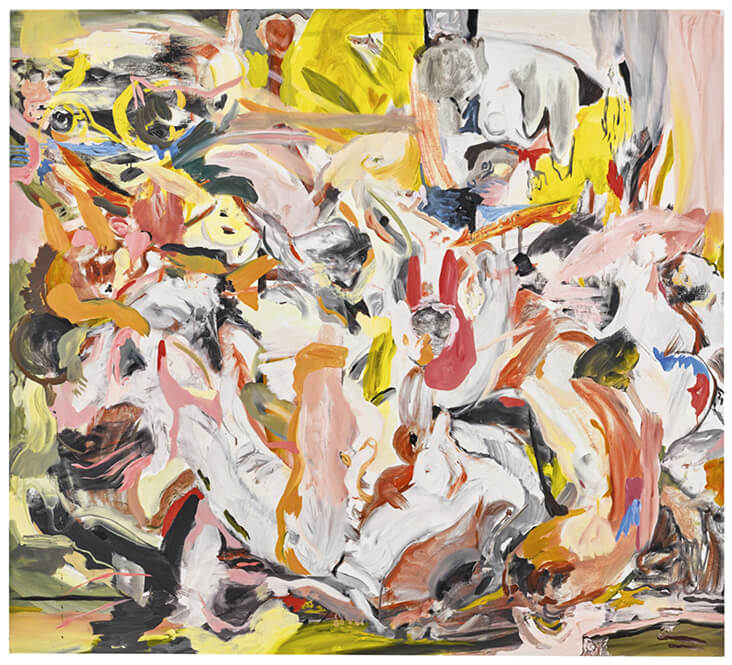 In the early career painting, I Will Not Paint Any More Boring Leaves, 2004, Brown indulges the senses with an array of flickering colours and patterns that appear entirely spontaneous and improvised. Subtle allusions to landscape are hinted at in the painting’s title, and we can almost make out the pale lime green of bleached grass spreading out across a grounded area which cracks here and there into passages of deep brown earth. Above it, ribbons of paint seem to swirl around a central area of pale pink, as sweet and creamy as strawberry ice cream.

The later painting Chestnut and Snowball, 2013 is more obscure and groundless, even if the title points towards the shifting of seasons from autumn to winter. Brown creates a feast for the eyes in this indulgently layered patchwork of pink, black and lemon yellow that overlap one another in a rhythmic dance of life. We could just as easily be looking at moving figures as freshly fallen snow glinting in the pink sunlight, a guessing game Brown clearly enjoys playing with her audience. 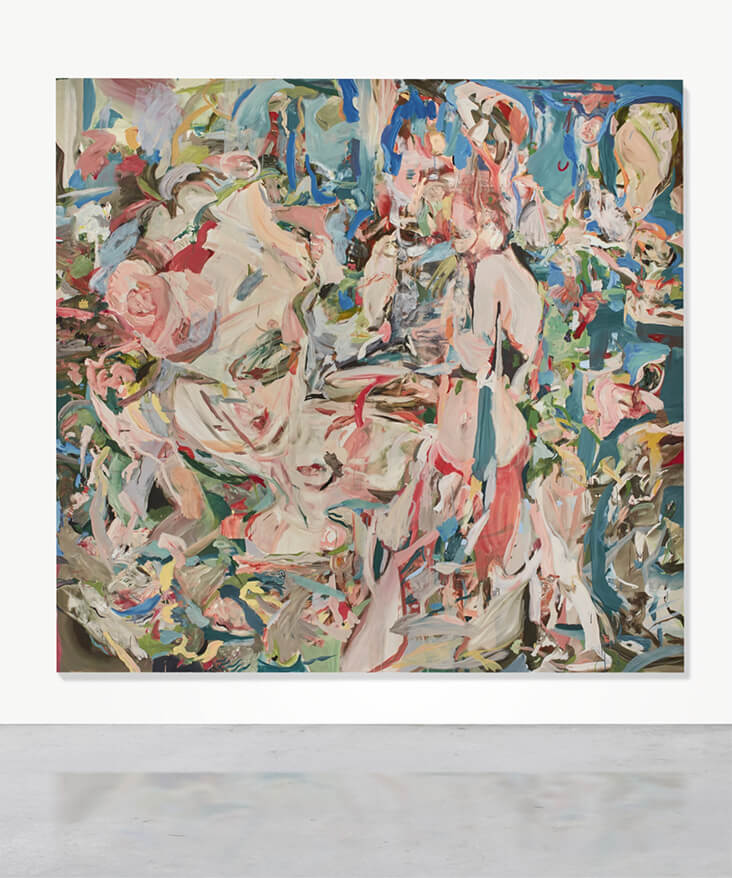 A Swan Comforting a Snake, 2014, image courtesy of Sotheby’s

A Swan Comforting a Snake, 2014, is also airy and groundless, as colours seem to shatter into prismatic, kaleidoscopic shards reminiscent of Picasso’s early Cubism. Blushing shades of pink dominate the scene, suggesting blooming roses, or perhaps naked bodies basking in the sharp, crisp sunlight. When set against shades of dark turquoise, deep blue and moss green, these pale pinks become even more pale and iridescent, blossoming like flowers in an exotic garden and invoking the pure, unspoilt and youthful innocence of spring.

French painter Pierre Soulages made a career out of painting with shades of black like ANTHRACITE, sweeping it in broad, confident gestures across paper and canvas. His stark, minimal designs nod towards the simple confidence of cave paintings and Japanese calligraphy, with loose marks crisscrossing over one another to create the sensations of depth, space…

Abstract Expressionist Joan Mitchell brought swirling tornadoes of colour into her art, and BLUE APATITE was one of her favourites. She loved how this rich teal blue could energise her paintings with the colour of electricity, twirling this way and that in dynamized ribbons, or pooling into watery patches of translucency. Though her densely patterned…

Colour was a driving force in the Surrealist art of Joan Miro, pulsing through his images with a passionate and rhythmic energy. He played with all the colours of the rainbow throughout his long and prolific career, exploring how curious and unexpected relationships could be discovered between them. The fresh, cool and minty shade of…

Next to blazers, blouses are my absolute favorite to wear. I enjoy making them the most. I especially love draping sleeves. I’m all about fit and balance when getting dressed. When I’m headed to my studio, I’m usually dressed like this. An oversized blouse, that is balanced with a fitted waist. In this case, I…

Raoul Dufy’s art was a celebration of life, in all its stunning, technicolour glory. He painted with light, airy brushstrokes and intense colours like MEDITERRANEAN BLUE, illustrating boundless optimism and the endless days of lazy, sunlit summer. Dufy spent much of his career painting along the Mediterranean coastlines of France, and his paintings capture the…