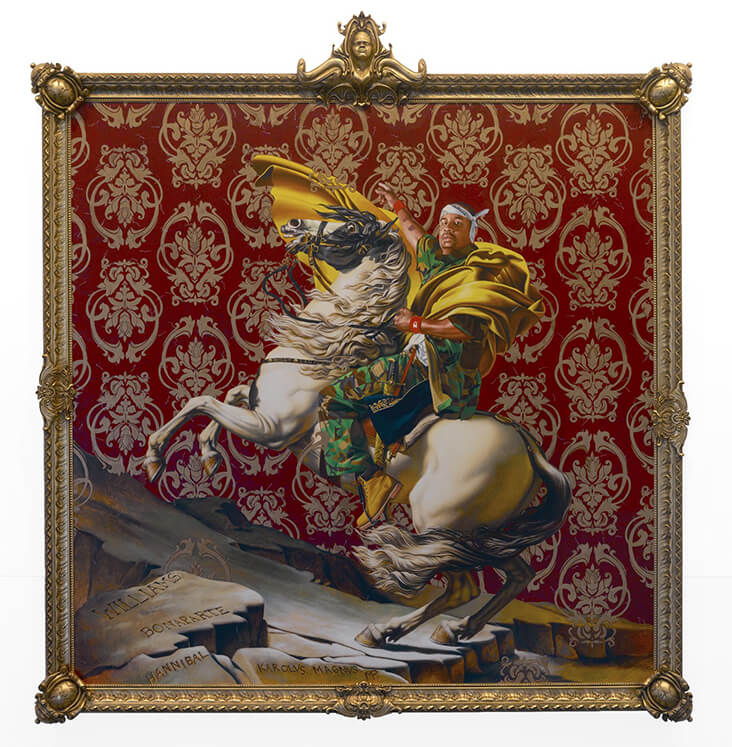 Napoleon Leading the Army over the Alps, 2005

Contemporary artist Kehinde Wiley makes art that celebrates life, with ridiculously exuberant characters, joyful colours and indulgent patterns that are impossible to ignore. Taking his cue from the great history painters of the past, Wiley explores the emotive potential of fabric, allowing it to wrap around his heroic characters and lend them masterful qualities of authority and grandeur. Sometimes textiles patterns even climb off walls, furniture and clothes, hovering in the very air around his figures as if transporting them into a mystical garden of delights. Fabric and textiles, it seems, are in his blood, and they feed into all aspects of his paintings, informing their very essence. 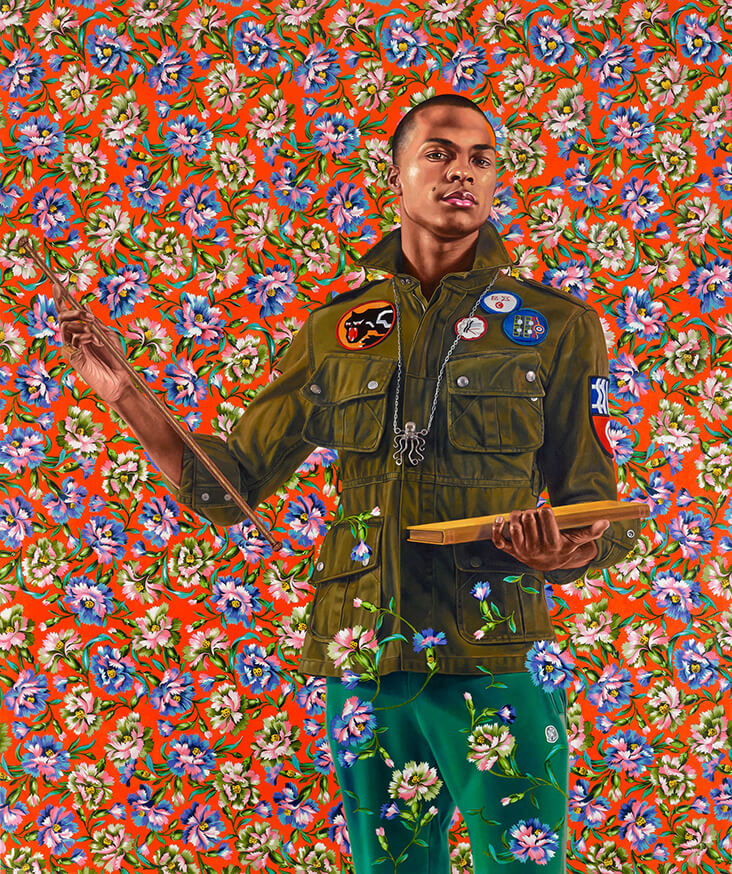 Since he was a child, Wiley expressed an innate fascination with textiles. Born and raised in south-central Los Angeles, Wiley’s mother owned a thrift store, and Wiley would often help his mother gather and sell bric-a-brac so they could get by. With six children to feed on her own, this business was the family lifeline. But for Wiley it was also something more – it was here that he first experienced the wonder of pattern, watching how its intricate shapes and colours could bring upholstered objects to life. Wiley was especially taken with the floral repeat-pattern fabrics of William Morris, noting how, “… as a kid, I grew up seeing a lot of floral patterns, some Morris-inspired, some actual Morris pieces, among the stuff [my mother] was selling. And from very early in my life, there was this ornate sensibility inscribed.” 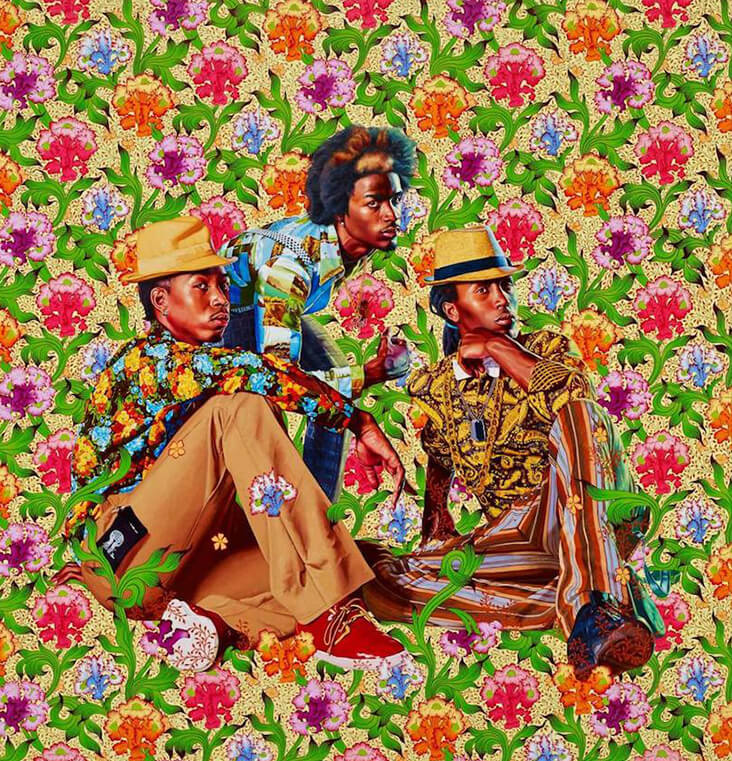 Wiley went on to study fine art at the San Francisco Art Institute, followed by an MFA at Yale University. It was as a young graduate that he began his interest in portraiture. Since then, he has painted a huge range of people, ranging from celebrities to strangers met on the street, (Wiley was famously selected to paint former US President Barack Obama’s portrait in 2017) and his focus is on black people, celebrating the complexity of their culture and heritage. Fabric and pattern are a vital element in building a sense of character in his sitters, but his approach is non-linear and post-modern, heaping together a haphazard mix of references, merging urban streetwear with the floral motifs of William Morris and others, harking back to the fabric of his childhood. Wiley takes Morris’ motifs and makes them his own, jumbling them up and making them feel alive with irregular, haphazard layouts, as he explains, “… I began to take the DNA of Morris and build upon it to create hybrids of my own, these kinds of all-over patterns that feel random and chaotic as opposed to that very rational order you see in traditional Morris prints.”

Many of Wiley’s portraits also make a nod towards history painting, re-styling their sublime heroism by placing a black figure at the centre. Much like his historical predecessors, Wiley makes fabric an essential component as a theatrical device, but he also weaves in references to fashion and fabrics associated with African-American culture, particularly contemporary fashion. He says, “I’m looking at fashion as culture, fashion as serious business. Where people will often times dress themselves as a form of armour. Fashion is armour in so much as it says something about who we are in the world. It also protects us a bit. My work tries to concentrate on fashion as a conceptual colour. It’s yet another colour in my palette to tell a story.” 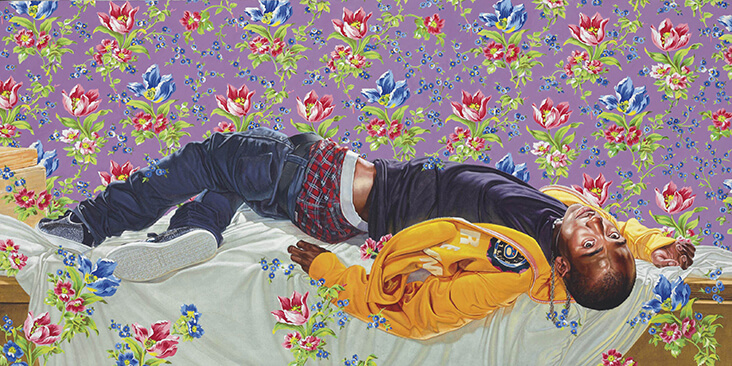 The vast, dramatic painting Napoleon Leading the Army over the Alps, 2005 demonstrates Wiley’s clash of old and new culture, nodding somewhat ironically to the colonial heroism of Jacques-Louis David’s Bonaparte Crossing the Grand Saint-Bernard Pass, 20 May 1800, 1800. Wiley’s African-American hero here stands in stark contrast to history paintings of the past, celebrating a new kind of hero for the modern age. This painting is also a celebration of pattern, texture and colour, as indulgent yellow fabric sweeps around his hero’s shoulders and drifts into the air. The backdrop is a Morris-inspired repeat pattern, offset against the subject’s contemporary khaki trousers and combat boots. 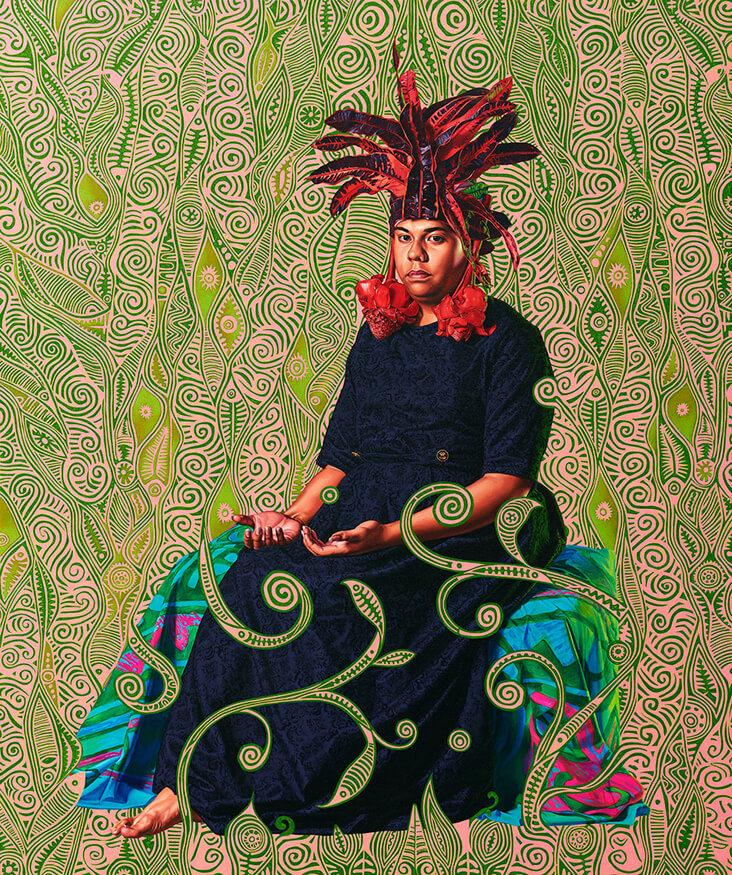 Jerry I (Study), 2008 is more intimate, a study for a larger work which shows how Wiley loves to bring floral pattern trailing off its background surface and into the surrounding space. The more recent Femme Piquée Par Un Serpent II, 2010 is a play on the reclining female nude, as a young man dressed in urban streetwear satirically mimes the submissive poses of Romanticist painters. The chintz floral pattern surrounding him is in stark contrast to his contemporary clothing, a playful and cheeky clash of old and new. Wiley’s more recent painting Three Boys, 2015 is a veritable feast for the eyes, combining clashing florals with stripes, paisleys and curling leaves that seem to sprout into life around the three young men.

Portrait of Moerai Matuani, 2019 is one of a series of paintings Wiley made during a year-long visit to Tahiti, following in the footsteps of Paul Gauguin. And like Gauguin, Wiley makes an homage to the rich diversity of Polynesian culture, as can be seen in this dazzling artwork, with its vivid, intense and immediately arresting clothing.

In our final article on the role of fabric in Japanese ukiyo-e art, we examine how the genre of ukiyo-e evolved and changed in the 20th and 21st centuries, and the continuing role fabric played in its development throughout this period. Although the dominance of ukiyo-e in Japanese culture largely faded from around 1900 onwards,…