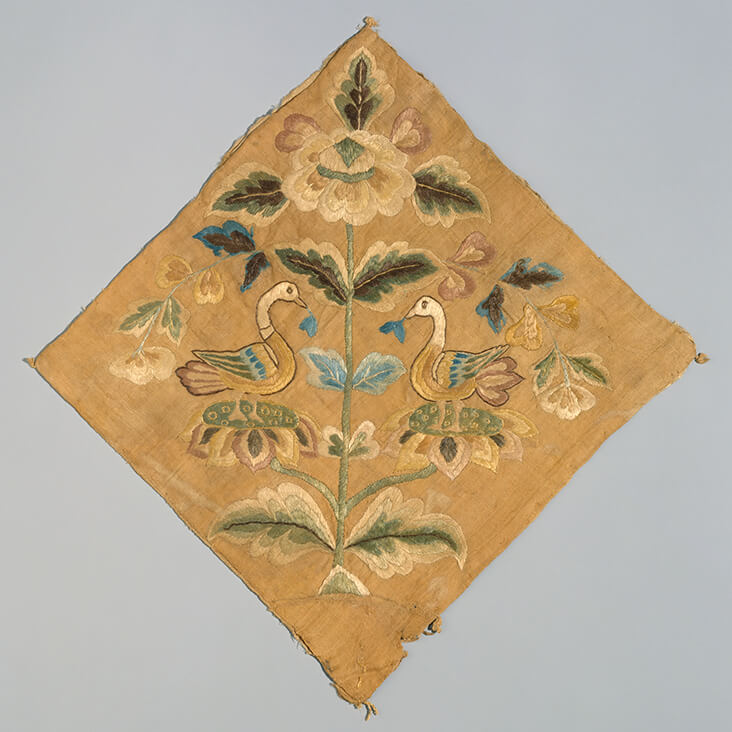 The roots of embroidery are often traced back to ancient China. It was the Chinese who first began cultivating and producing silk, a magical substance that could be woven into the softest fabrics, or spun into threads as soft and fine as human hair. Some of the very first embroideries were also produced in China thousands of years ago, onto pieces of wool, linen and hemp. It was during the Han Dynasty (206 BC – 220 AD), that embroidery in China really took off, and since then it has remained a staple of Chinese culture. We can recognise a particular style of Chinese embroidery for its richly complex, ornate designs, featuring fantastical creatures and curling, organic forms.

China’s history of embroidery began when the country first started making silk, at least 5,000 years ago. Evidence suggests simple passages of embroidery were made in ancient China as far back as the Neolithic era, and over time techniques became increasingly sophisticated. So much, so, in fact, that embroidered clothing was reserved for revered figures, including royalty. In the classic ancient Chinese text, The Book of History, it is described how the ancient monarch Shun wore a series of embroidered garments featuring various motifs including the sun, moon and stars, as well as mountains and dragons. 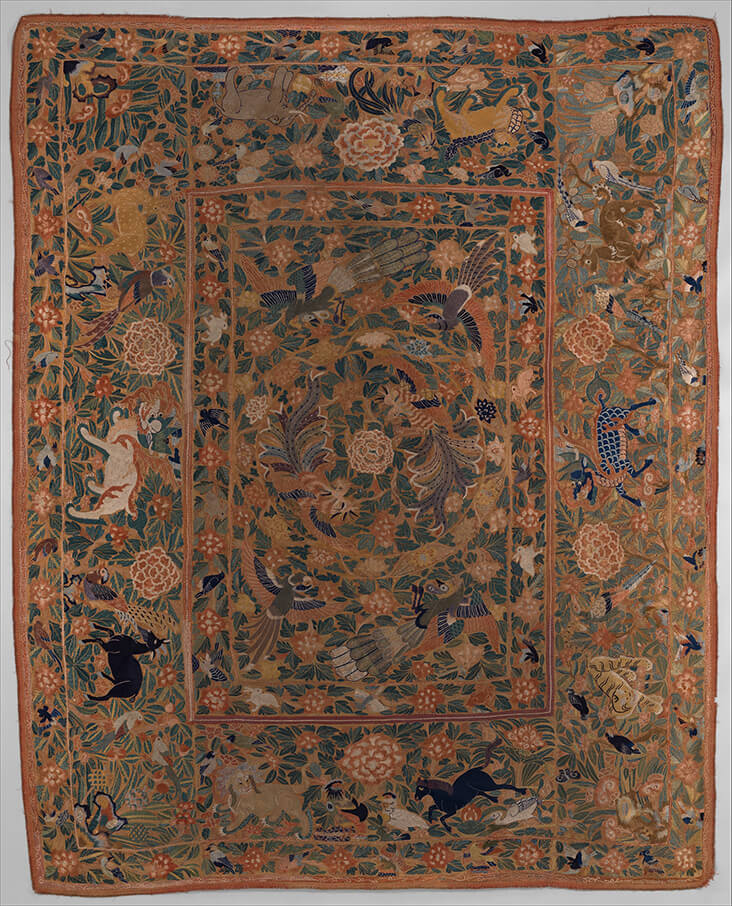 Two pieces of Chinese embroidery were later discovered in a Chu tomb in Changsha, Hunan Province that have been dated back to the Warring States Period in China’s history, and they demonstrate an intricate and skilful craftsmanship in chain stitch techniques that would become increasingly complex and revered. The later Han Dynasty was when embroidery really took off in China, and many embroidery patterns have survived from this period. They show just how exquisitely detailed Chinese embroidery was becoming, and the most popular recurring motifs were running animals, the flying phoenix and the wavy cloud. 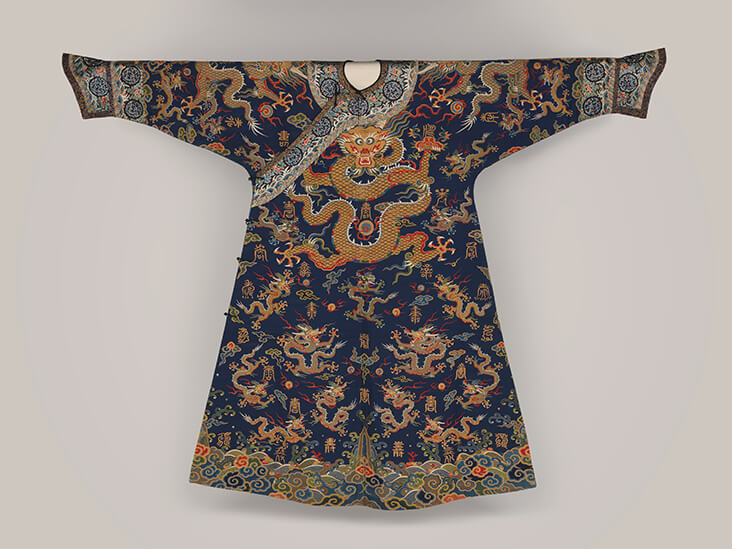 During the emergence of the Silk Road trade route, Chinese embroidered fabrics became highly desirable and influential, informing embroidery styles throughout Central Asia and Europe. Increased desire for embroidery led to it becoming a highly prized luxury. This led the royal courts of Imperial China to set up their own embroidery workshops where the latest, most innovative and expensive techniques were pioneered. Chinese royalty were drenched in embroidered garments, which adorned their clothing, walls, beds and even burial chambers. 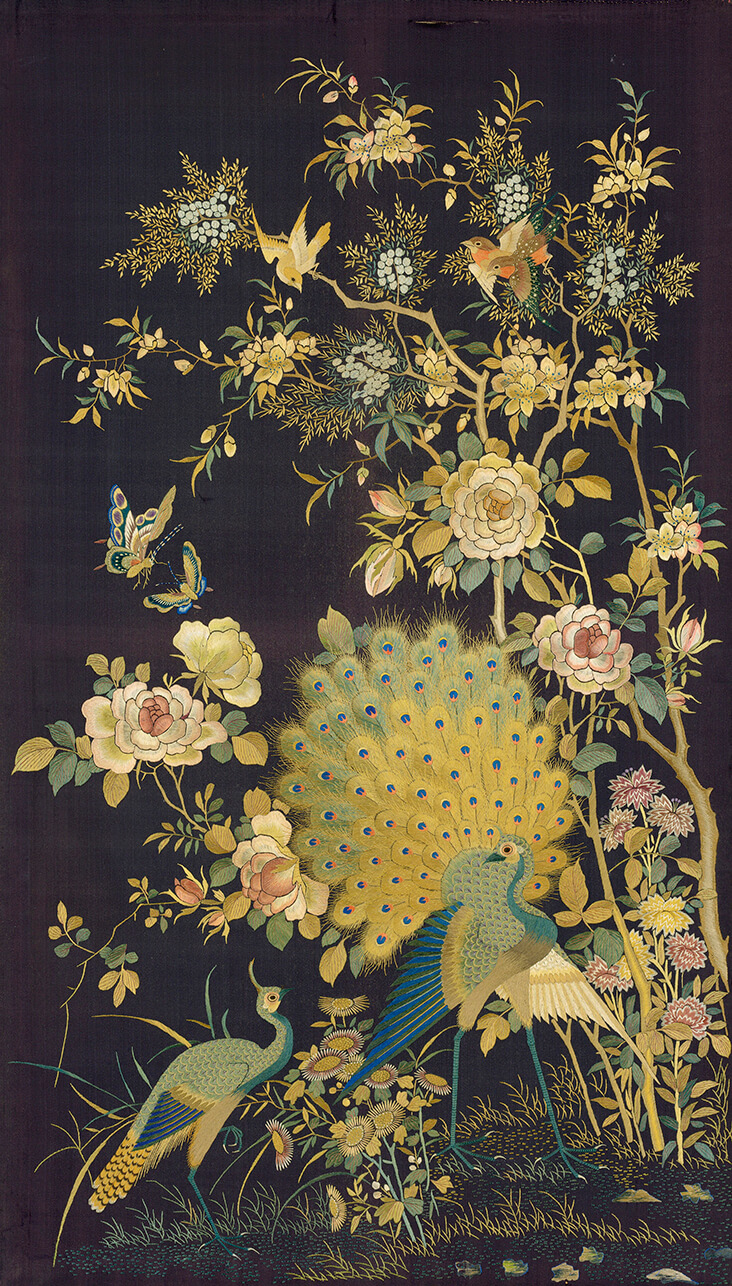 Throughout the Tang Dynasty (618-906) Buddhism was popular practice, and embroidered garments and wall hangings often featured its stories and characters. Chain-stitches of earlier times were replaced by plain stitches, which allowed for greater colour changes within a single embroidery. Advancements in yarn-dyeing and double-sided patterns were also made. During the Song Dynasty (960-1279) Chinese embroidery became more closely aligned with art, depicting real landscapes and portraits with startling levels of realism. New stitches were innovated, along with finer threads, sharper tools and a wider pool of colours.

Throughout the Yuan, Ming, and Qing Dynasties embroidery continued to flourish, branching out from royalty into popular culture. Popular styles that emerged include patch needlepoint, yarn embroidery and metallic silk embroidery. Fantastical animal motifs were particularly popular, especially dragons, embroidered in vivid colours and with painstaking attention to detail. 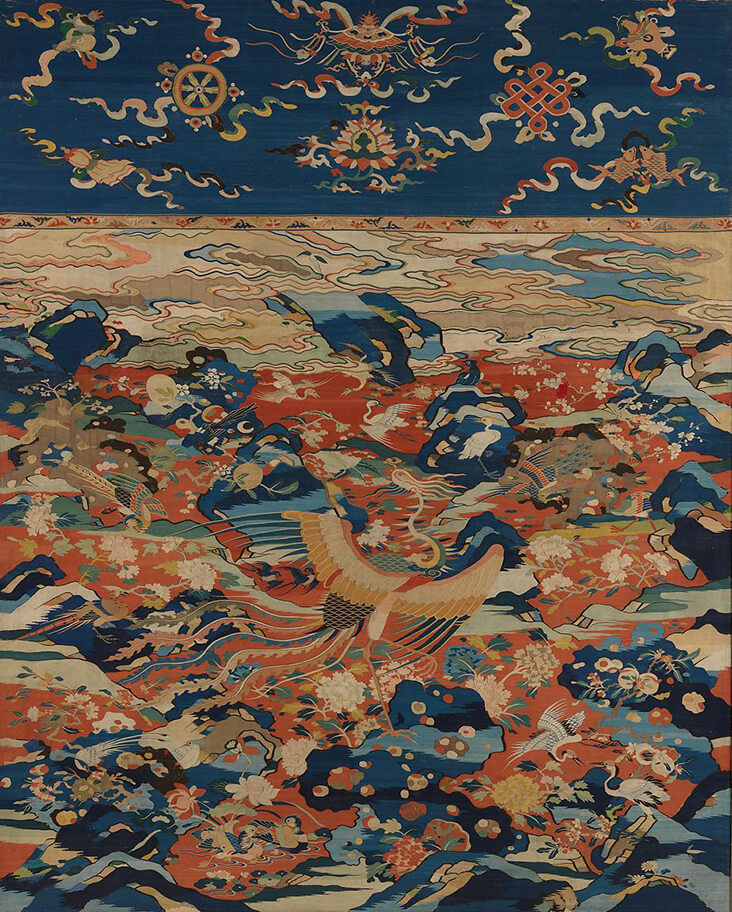 Chinese embroidered ‘Panel with a Phoenix and Birds in a Rock Garden’, made with silk and metallic thread, late 16th and early 17th Ming Dynasty, Metropolitan Museum, New York

In recent times, embroidery in China is still a widespread and vital aspect of visual culture. Although much embroidery is produced by sophisticated machinery, there are still some master embroiderers who keep the art of hand-made embroidery alive, particularly with silk threads, and their stunning work proves nothing can beat the dedicated hard-work of the human hand. One clothing brand who have brought Chinese embroidery back into the centre stage are Eve Group, who infuse their contemporary garments with traditional elements of tie-dye and embroidery, demonstrating the incredible visual power and historical significance of indigenous Chinese embroidery.