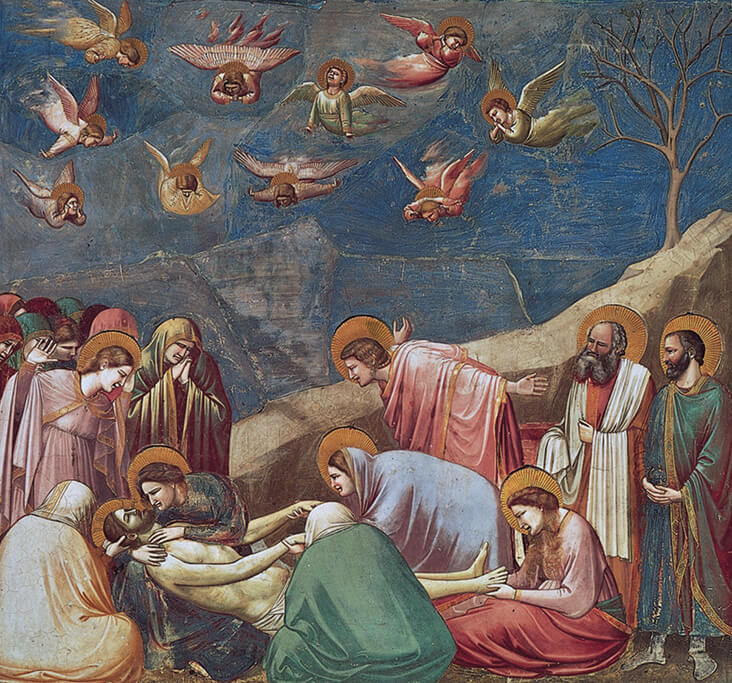 Fabric defines Renaissance art, cascading, caressing, or breezing over saintly figures, lavish interiors, and ethereal landscapes with decadent, sumptuous folds. Art reflects how fabric was woven into Renaissance culture, filling palaces, churches, interiors, and streets with glorious colour, pattern, and texture. But art also reveals the mystical, theatrical, and symbolic potential of fabric in Renaissance culture, which could represent subjects as varied as wealth, status, sexuality, and the holy spirit. In this new series, we will look at the evolving role of fabric in Renaissance painting through the ages, from Early Renaissance, boldly coloured drapes, to the silky sheen, high polish, and dazzling realism of Mannerist and Baroque art. 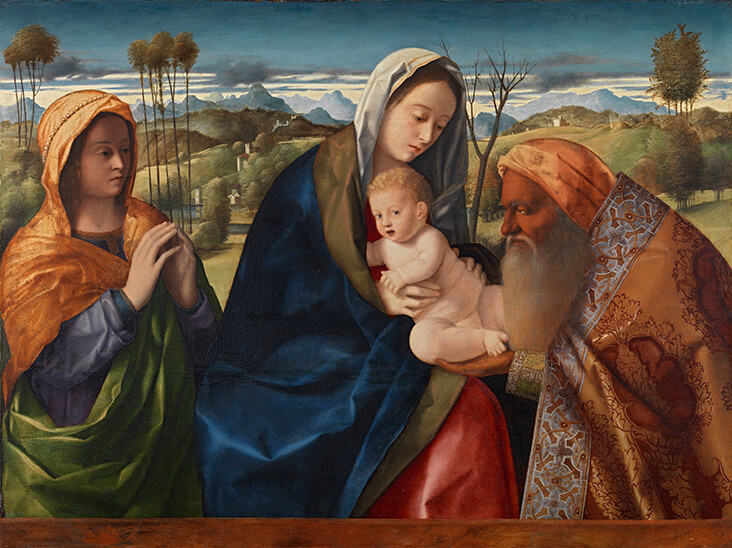 In the early Renaissance period, the Italian textile industry was slowly rising into an international powerhouse. Throughout the 15th and 16th centuries, fabrics including cotton, linen, wool, and silk were produced in high quantities for wealthy patrons. Some patrons even ran their own textile mills, where exclusive, bespoke luxury items could be made on demand. One regular textile patron was the Italian church, who commissioned a broad range of fabrics including velvets, laces, embroideries, and tapestries, which, when displayed alongside glistening gold chalices and soaring architecture could invest their spaces with sacred awe and wonder. Fine, beautifully made textiles also adorned the homes of wealthy aristocrats, an outward symbol of their lofty place in society; linens became shirts and bedding, while sumptuous, thicker weaves were made into hangings, curtains, and other home furnishings. 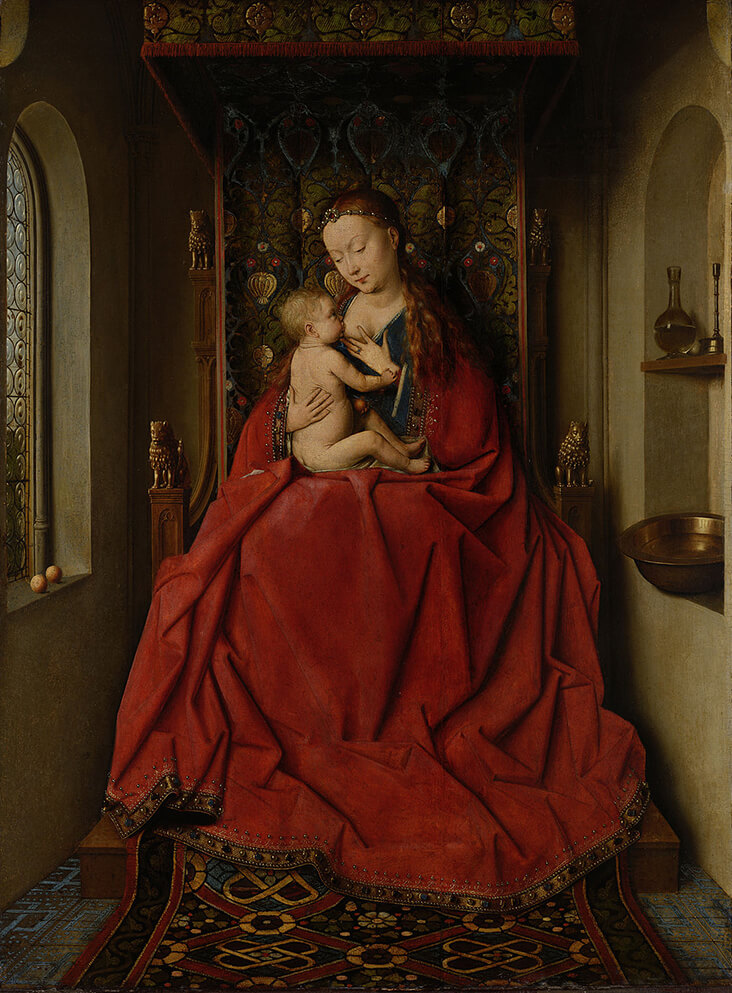 Few examples of these textiles exist today, but paintings are our true window into their world, reflecting not only the lavish aesthetics of real interiors, but also the spiritual significance that fabric played in their culture. One of the first painters to explore the potential of drapery was the early Renaissance pioneer Giotto di Bondone, whose Scrovegni Chapel in Padua, Italy was completed in around 1305, telling the lives of the Virgin Mary and Christ. Colours play a vital role in denoting character, from Mary in red and blue, to Judas in blazing yellow, while hanging qualities of fabrics convey theatrical, bodily movement as they are stretched, twisted and hung, showing us where to look as his stories unfold.

As painting techniques became more sophisticated, so too did the expressive possibilities of fabric. In 15th century Northern Europe, Van Eyck’s startlingly lifelike costumes adorned both real and Biblical characters, adding highly intricate patterns of embroidery, weaving, and jacquard to symbolise the weight and significance of his characters. He drenched the Virgin Mary in searing hot red fabric, a symbol of wealth because the dye was so rare, made from thousands of crushed beetles. In the 16th century, Italian painter Giovanni Bellini’s paintings of the following century capture fabrics as crisp shards, pressed or crumpled into sculptural, angular forms that encircle holy saints and angels with a dazzling aura of light. 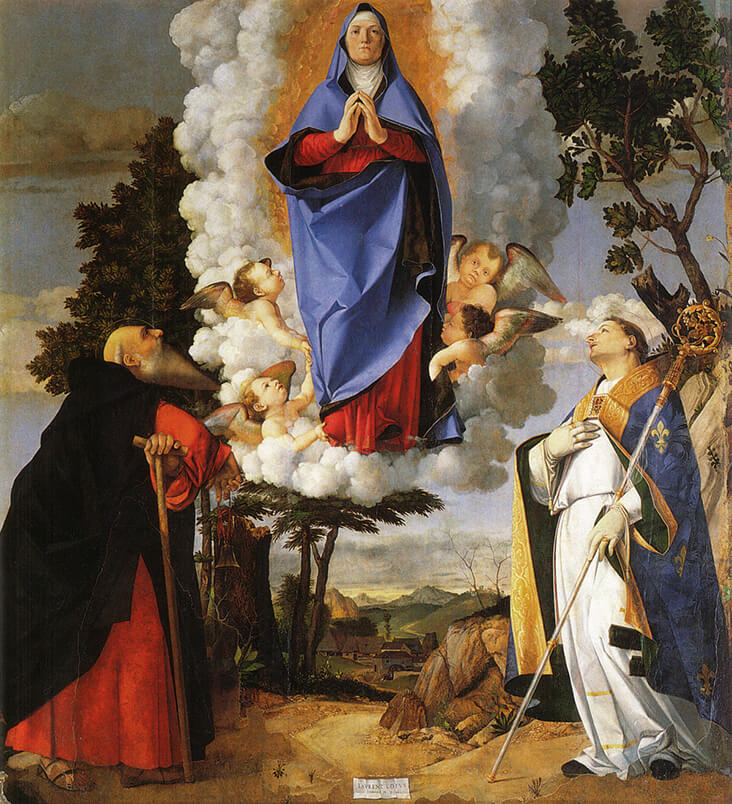 A generation later, Italian artist Lorenzo Lotto brought even greater theatricality to fabric, crushing, puffing, and padding his sitter’s clothing to give them more body and volume than the people wearing them. Both colour and texture are amplified in the clothing of his central characters, drawing our eyes towards them first. A Venetian master of the late Renaissance, Titian’s fabrics are softer, diaphanous and sensual, melting into the bodies, landscapes, and skies they surround, lending them a ghostly spirituality that allows them to hover just beyond the visible world, an attitude that would have reverberations into the Mannerist and Baroque periods that followed. 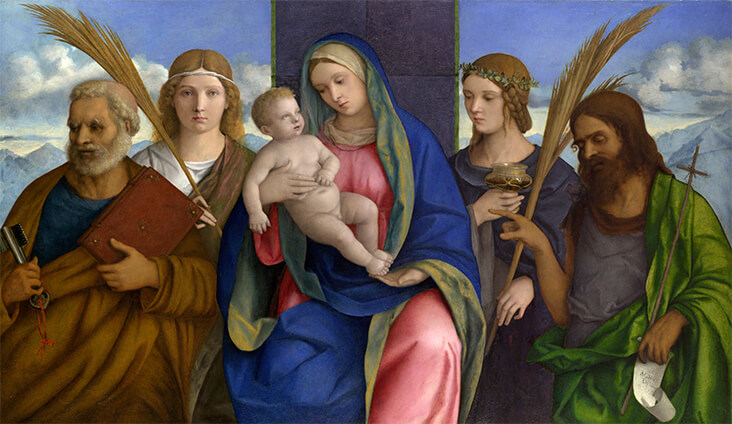 As these, and so many artists reveal, the wondrous varieties of fabric in Renaissance painting offer insight into the societies in which they were made, highlighting their styles, beliefs, hopes, and fears. But as Paul Hills, art historian, and writer of Veiled Presence: Body and Drapery from Giotto to Titian, (2018), points out, they also allow us to see these works with entirely fresh, ahistorical eyes, appreciating the textural, visceral, and gloriously tactile delights of fabric, which he calls “qualities that enable (Renaissance paintings) to live beyond the historical circumstances of their making.”