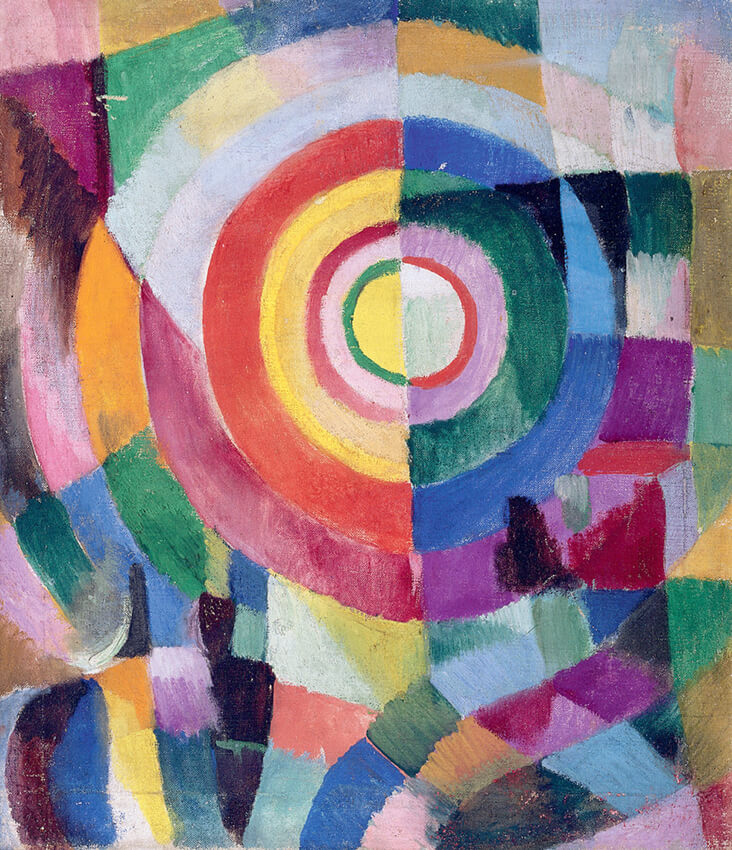 Sonia Delaunay was an unmistakable talent, a star of the 20th century who moved seamlessly between disciplines. Underpinning her practice was a fascination with colour and movement, and the ways it could capture the anticipation of rising modernity in Paris. The colour combinations she explored were often unusual and unexpected, creating jarring, clanging clashes of visual noise that were as momentous as the industrial changes going on around her. IRIS Linen’s pale lilac shade often featured in her art, forming cold passages of light in amongst riotous patchworks of intensity, suggesting the electric light that pulsed through her life.

Sonia Delaunay was born in 1885 to Jewish parents who lived in a modest home in Odessa. Her birth name was Sara Stern, and it was one of many names she would have throughout her lifetime. When she was just five years old, the artist was sent to St Petersburg to live with her wealthy aunt and uncle Anna and Henri Terk. Thereafter she assumed the name Sonia Terk, marking a new chapter in her life. The move signalled a dramatic change in fortune, exposing her to an intellectual life filled with art, literature, music and travel. 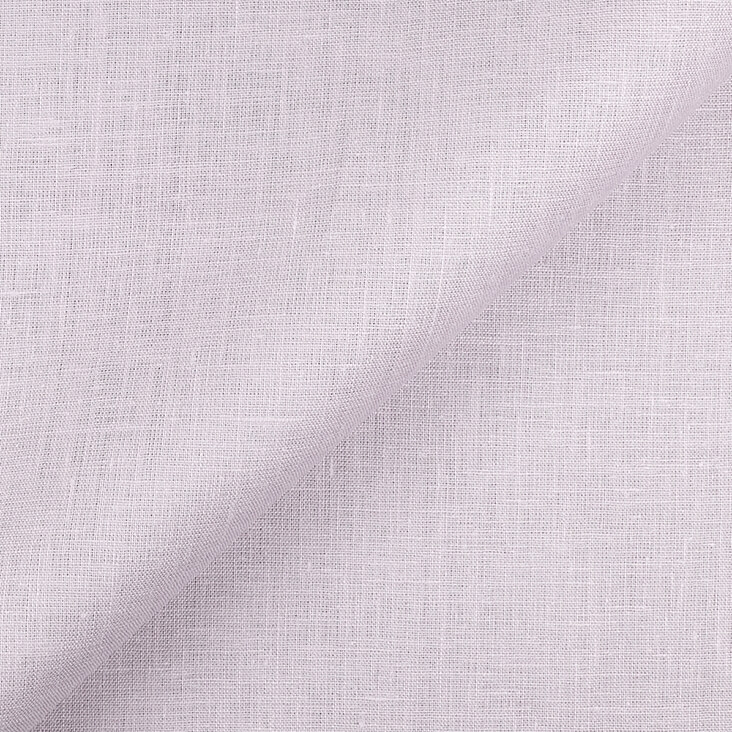 Sonia showed early promise in art at school, and this spurred her on to train in fine art. In 1904 she left Russia for Germany, training at the Karlsruhe Art Academy. Two years later she moved to Paris to study at the Academie de la Palette. In Paris, she was exposed to the latest avant-garde ideas around Impressionism, Expressionism, Fauvism and Cubism, all of which would feed into her practice. In 1907 Sonia met and fell in love with the fellow artist Robert Delaunay. Together they shared a mutual fascination with colour and optics, particularly the way complementary colours could rub up against one another and create sparks of electricity. They both developed a remarkably similar style of abstraction they called Simultanism, based loosely on the Parisian cityscape and its fractured light.

Electric Prisms no.41, 1913-14 typifies Sonia Delaunay’s art of this era, with a glorious array of overlapping colours that seem to swirl and swarm with energised movement. What might at first appear entirely improvised and experimental is in fact a considered arrangement of colour, with saturated shades of red, yellow and green interspersed with soft pastel hues of pale blue and lilac. The hazy, indistinct colours in the background of this work were designed to mimic the diffused electric lighting that coloured the streets of Paris at night when the city darkened and allowed mystery to take hold. 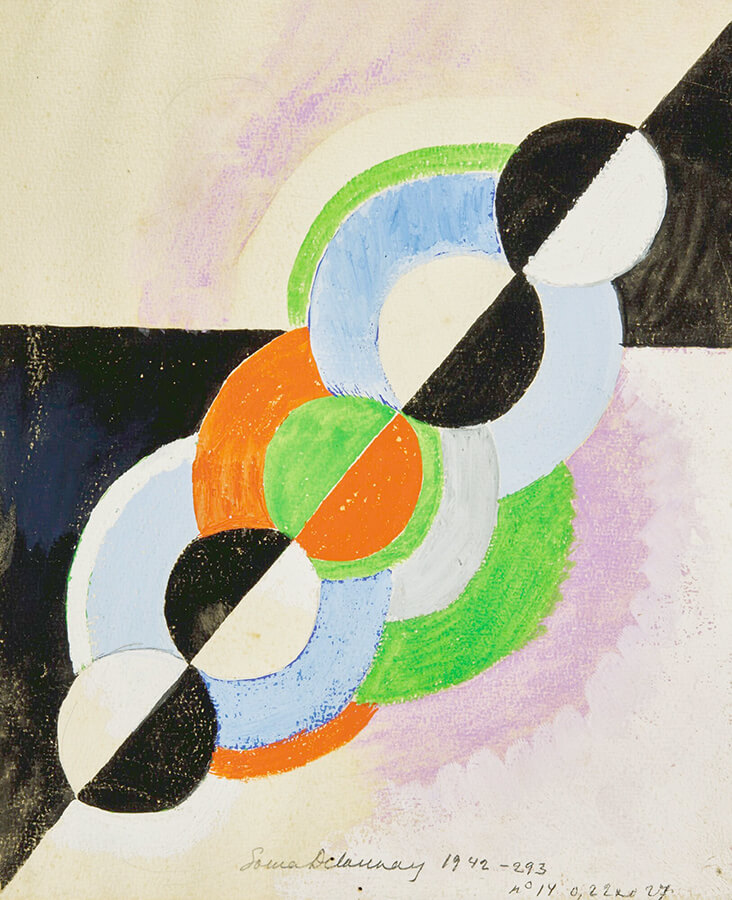 Perhaps unsurprisingly, the patchwork nature of Delaunay’s paintings naturally led her towards textiles – one of her first fabric creations was a patchwork quilt for her young son. In the years that followed Delaunay continued to make ever more adventurous experiments with fabric and textiles. She eventually pioneered her own Parisian fashion and textile business titled Boutique Simultane, producing a huge array of colourful, patterned clothing and fabrics which she called ‘living sculptures.’ The painting Simultaneous Dresses (The three women), 1925, portrays three women wearing her clothing designs, and demonstrates the artist’s desire to merge her fashion back into her painting. Much like her earlier paintings, Delaunay blends jazzy, lively geometry with arresting colours, while soft shades of lilac shimmer with anticipation in the background. 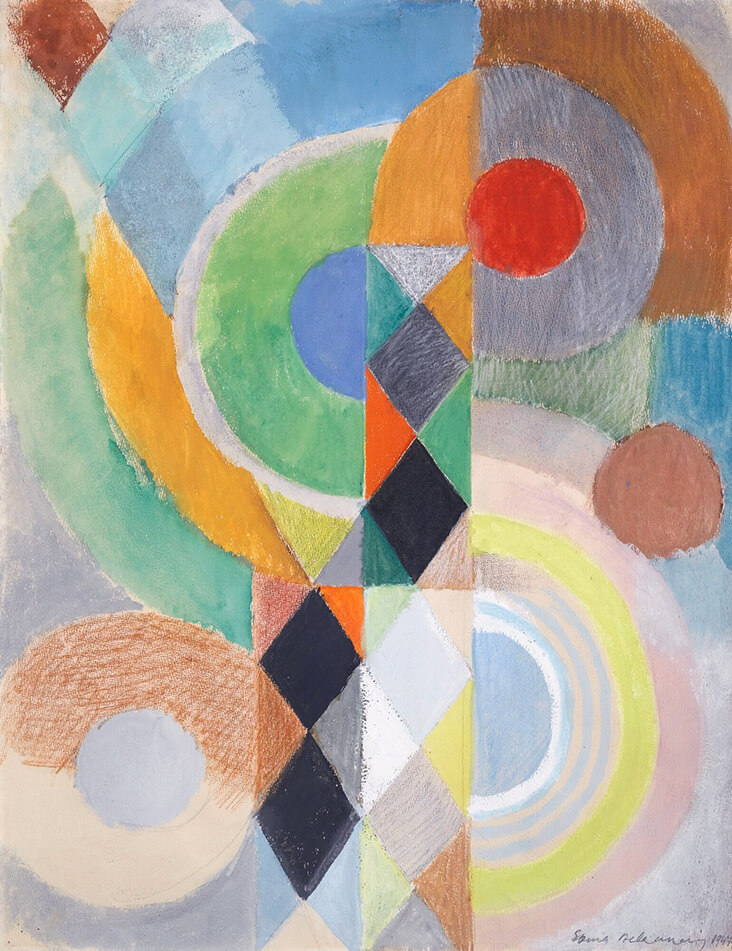 In her later years, Delaunay moved towards an increasingly lighter colour palette, with larger areas of light space punctuated by accents of searing colour. In Rythme Coloré, 1942, a misty shade of lilac illuminates the background, while acidic swirls of green and orange sing with musicality on its surface. In the slightly later Untitled, 1947, this lilac luminescence is even more evident, forming a series of halo-like rings alongside a complimentary yellow in the bottom right, that seem to shimmer and glow with the anticipatory excitement of electric light.