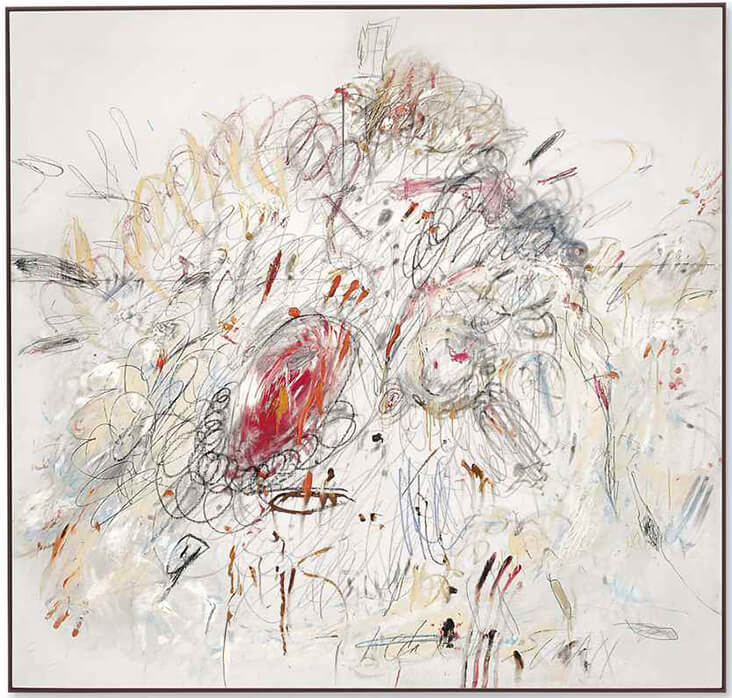 American painter Cy Twombly’s brilliantly expressive artworks often feature searing hot pinks like RED BUD Linen. This ardent colour blazes like an angry fire in the belly of his art, igniting life into them like hot breath to a flame. Twombly was a leading member of late Abstract Expressionism, emerging out of 1950s New York with his own unique take on painterly, action-based expression. His particular strand of messiness was characterised by calligraphic marks and energised movement, merging primitive forms of ‘proto-writing’ with aqueous streaks and swipes of paint. Twombly believed deeply that these marks were so much more than the sum of their parts, expressing ancient, foundational forces at the heart of the human condition. 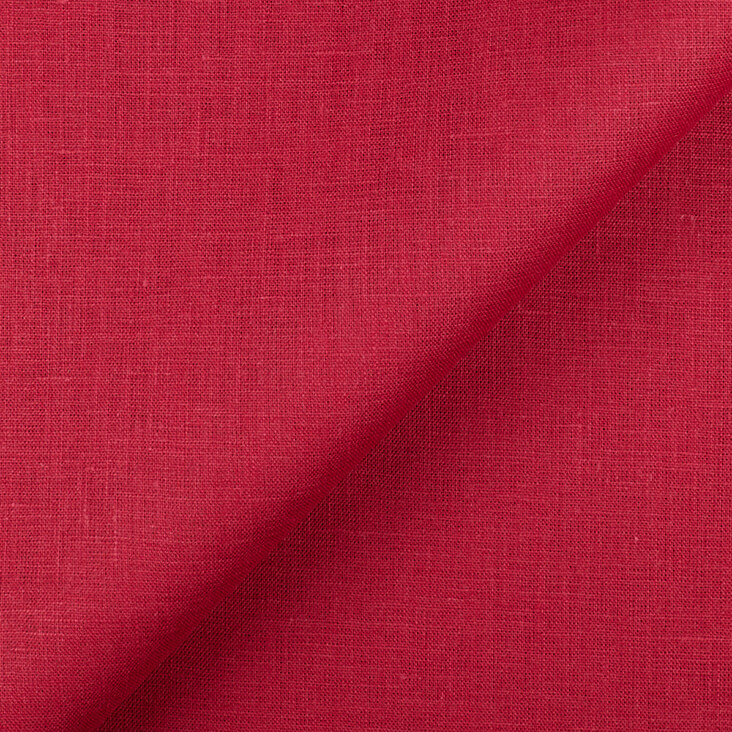 Twombly was born in Lexington, Virginia in 1928. He chose to study art as a young man, training in Boston and New York before entering the radical Black Mountain College of North Carolina in the 1950s. Abstract Expressionism and Pop Art were the two dominant factions of art practice during this time, and in some respects influences from both coloured Twombly’s early practice. But Twombly was also drawn towards the art, poetry and literature of ancient history, and the ways its themes could be embedded into his practice. Travel throughout Italy in the 1950s reinforced the artist’s fascination with classical antiquity and its emphasis on poetic movement and drama.

In early artworks Twombly merged this fascination in ancient art with the automatic styles of Surrealism that were popular in the New York scene – he did this by exploring how intuitive modernist processes could convey the raging emotion of classicism. One series of drawings the artist made at night, alone in the darkness of an empty hotel room were instrumental in defining his mature style, featuring a series of swirling biomorphic forms that would become a recurring feature in his art. From 1955 to 1959 Twombly frequented New York and became a leading member of the art scene alongside Robert Rauschenberg and Jasper Johns. On a return visit to Rome, Twombly met and fell for the Italian artist Tatiana Franchetti, and from thereafter he lived between New York and Italy for the remainder of his career. Twombly’s art reflected this habitual duality, combining Italy’s historical roots with the raw experimentalism of New York. 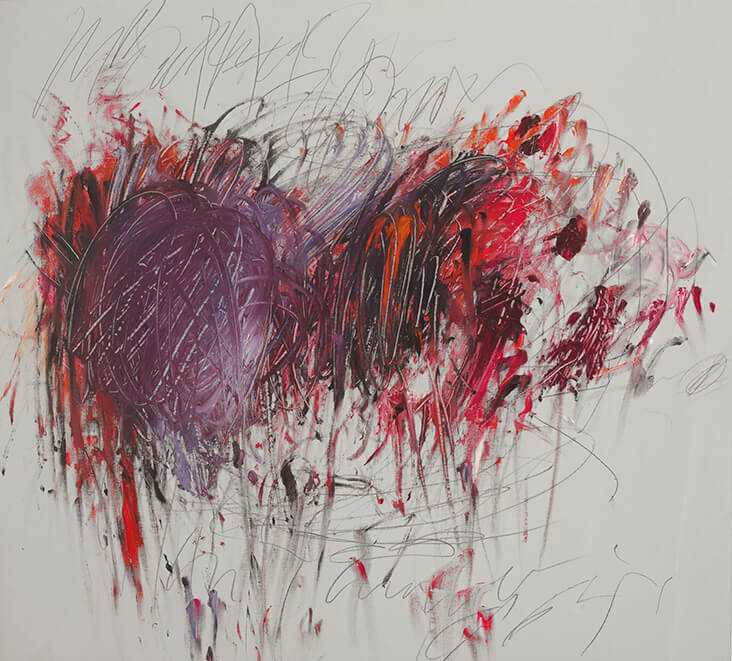 The epic, celebrated painting Leda and the Swan, 1962 relates to the terrifying story of the same title from Greek mythology, but Twombly responds intuitively to the drama and energy of the tale with angry scrawls and swirls of colour. Near the centre, an intense burst of crimson red jumps forth like a bolt of electricity, waking up the silver and grey marks around it. In the smaller painting Untitled, 1964 Twombly gives less away, inviting us to draw our own conclusions. Slim grey scribbles as fragile as wire seem to hover in the background, while thick, juicy passages of colour float in front, forming wild tangles and gluts of sticky mess that seems streaked into with finger marks. Deep violet is tinged here with tiny strands of electrifyingly bright pink, just enough to pepper the canvas with excitement and anticipation. 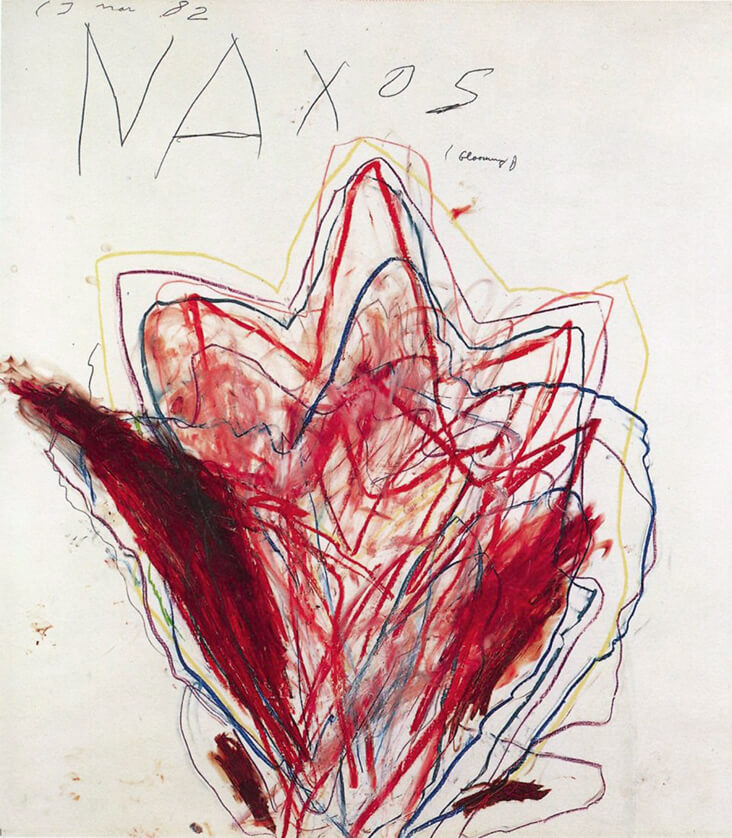 Twombly’s explosive drawing Naxos, 1982 makes a nod towards the Greek island of Naxos, once the cultural centre of Classical Greece and Byzantium. Here searing hot streaks of red and pink emerge from the ground like an overflowing volcano, drawn with a primitive, primal energy that literally radiates out from the flat page. Coronation of Sestrosis, 2000 also draws inspiration from early civilizations, an homage to the great King Sestrosis of ancient Egypt who fearlessly led the military expedition into Europe. Twombly’s interpretation of this great leader’s coronation is entirely abstract, but daubs of purple, crimson and yellow are as exciting and dangerous as fireworks, and they burst forth with the same anticipatory danger and wonder that this terrifying, almighty leader must have once evoked in his public.