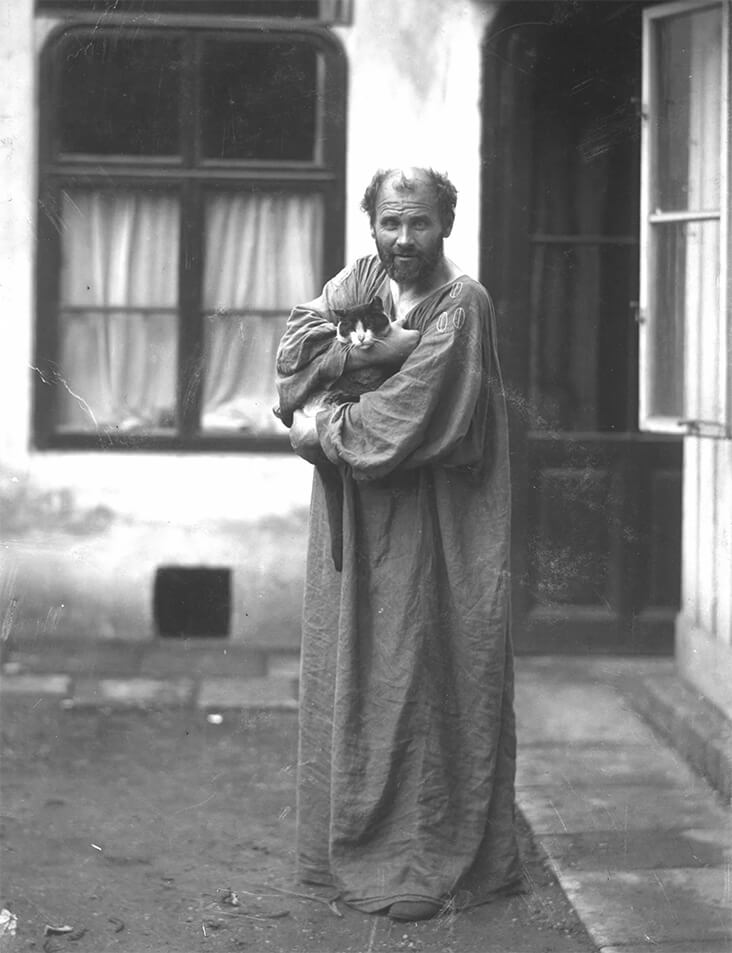 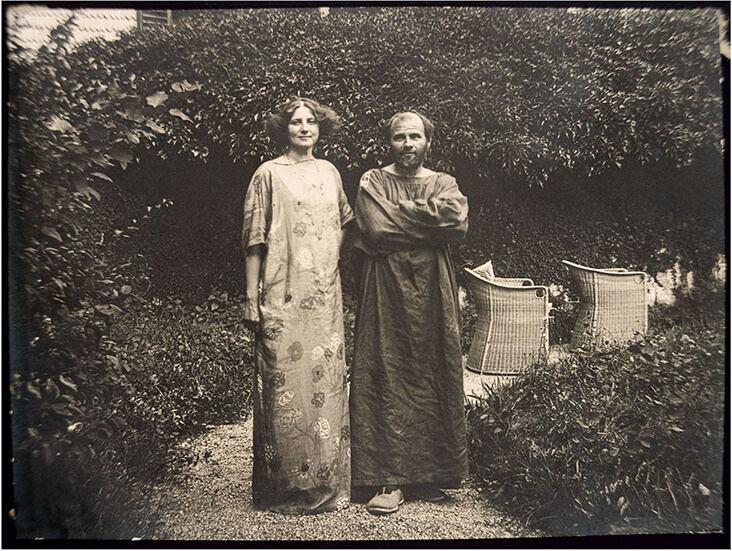 Klimt was the brightest leader of the Viennese Secession in the late 19th and early 20th century, a radical band of artists who broke with Vienna’s classical conservatism by introducing vibrant and experimental forms of modernism including Art Nouveau, Japonisme and Post-Impressionism. The group’s goal, they stated was to “show the modern man his true face.” At the heart of Klimt’s modernist values was the belief in the unity of the arts, and the dissolution of boundaries between fine and applied practices. Klimt adored women and he was particularly taken with the way textiles, costume and jewellery could ignite the expressive power of his female subjects, as demonstrated in his all-powerful Judith I, 1901. 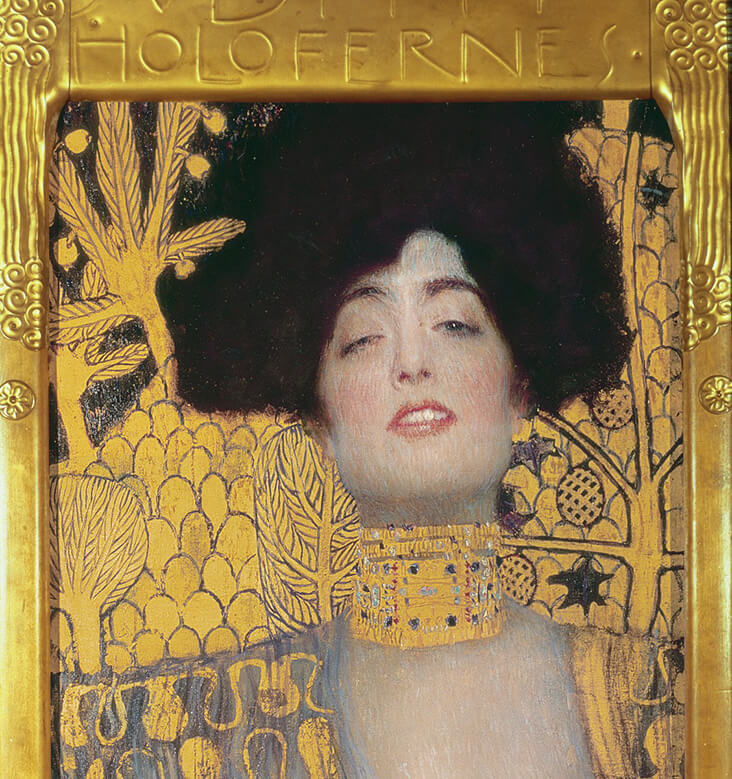 Klimt met Floge in 1891 and she became his lifelong muse and creative partner for the rest of his life. A strong-minded, independent woman, Floge often appeared as the subject in many of Klimt’s most famous paintings including the dazzling Portrait of Emilie Floge, 1902. As a successful fashion designer, Floge’s work profoundly impacted the nature of Klimt’s art; her long, loose silhouettes, wide ornamental sleeves and elements of Slavic and Hungarian embroidery can be clearly seen in Klimt’s paintings. Floge’s radical designs rejected the restrictive corsetry of the past for a new kind of free-spirited, bohemian woman, and this concept became the cornerstone of Klimt’s art.

In 1904, Emilie Floge and her sister co-founded the boutique Schwestern Flöge (Flöge Sisters), a popular boutique with Vienna’s wealthy elite. One of their most radical designs was the ‘Reform’ dress range, which hung loosely from the shoulders and had long, wide sleeves; the dress subsequently became a symbol for a new brand of woman who was sexually liberated and free. Together Floge and Klimt both designed a series of loose kaftan variations on the ‘Reform’ dress and Klimt made this his trademark style, reportedly wearing this comfortable garment while painting, with nothing underneath. 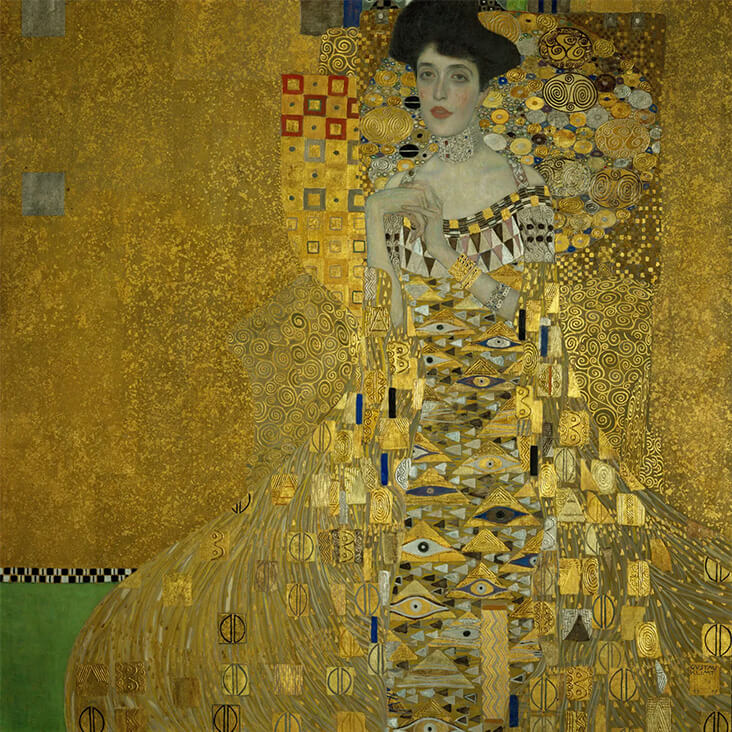 Portrait Of Adele Bloch-Bauer I, 1907

Klimt benefited from the success of Floge’s business, receiving regular portrait commissions from her clients who he painted wearing Schwestern Flöge clothing. Floge also benefited from the popularity of Klimt’s art, as his paintings promoted her fashion to a wider audience. One journalist of the time praised the way Klimt’s art celebrated, “the new Viennese woman … charmingly immoral, delightfully sinful, enchantingly perverse,” although Floge deserved at least some of the credit for this success.

Over their many years together, both Klimt and Floge avidly collected textiles from a wide array of sources old and new, using them as inspiration for their respective creative endeavours. Many of their collected textiles came from the radical Viennese Wiener Werkstatte, a workshop space that promoted the Art Nouveau style, with whiplash curls and shimmering decorative patterns. In time Floge and Klimt even made their own textile designs which were produced by Wiener Werkstatte and these fed back into Klimt’s paintings – various samples of Klimt’s fabric designs are held in the collection of the Metropolitan Museum of Modern Art in New York, featuring the same curls, swirls, scrolls and ornate passages of pattern as his works of art. 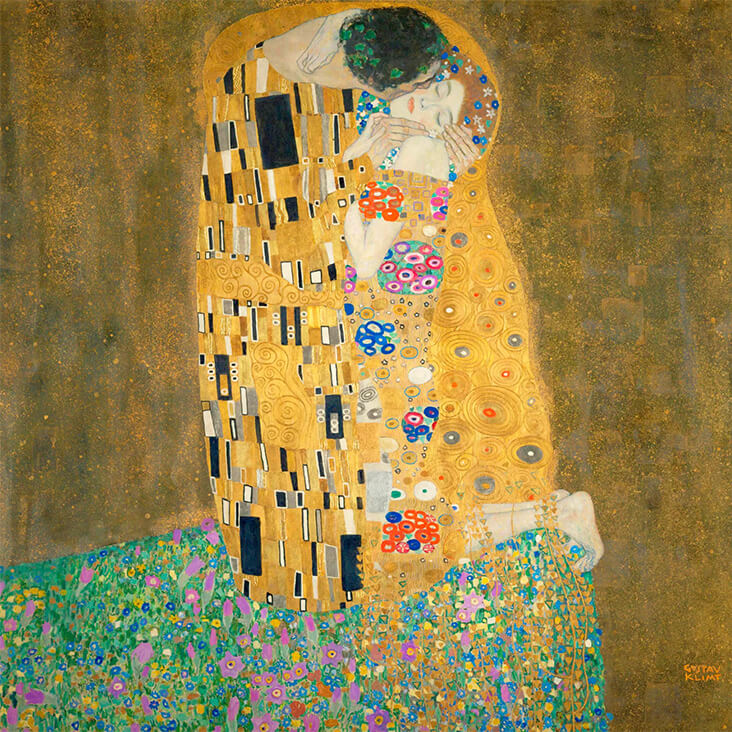 Klimt’s most famous painting, The Kiss, 1905-09 is thought to be an ode to his love affair with Floge, illustrating the incredible potent synergy between them that was the catalyst for their success. It captures Klimt and Floge bound together in an intimately tight embrace, while glistening and sumptuously decadent fabric wraps them up in the electrifying chemistry of their love.