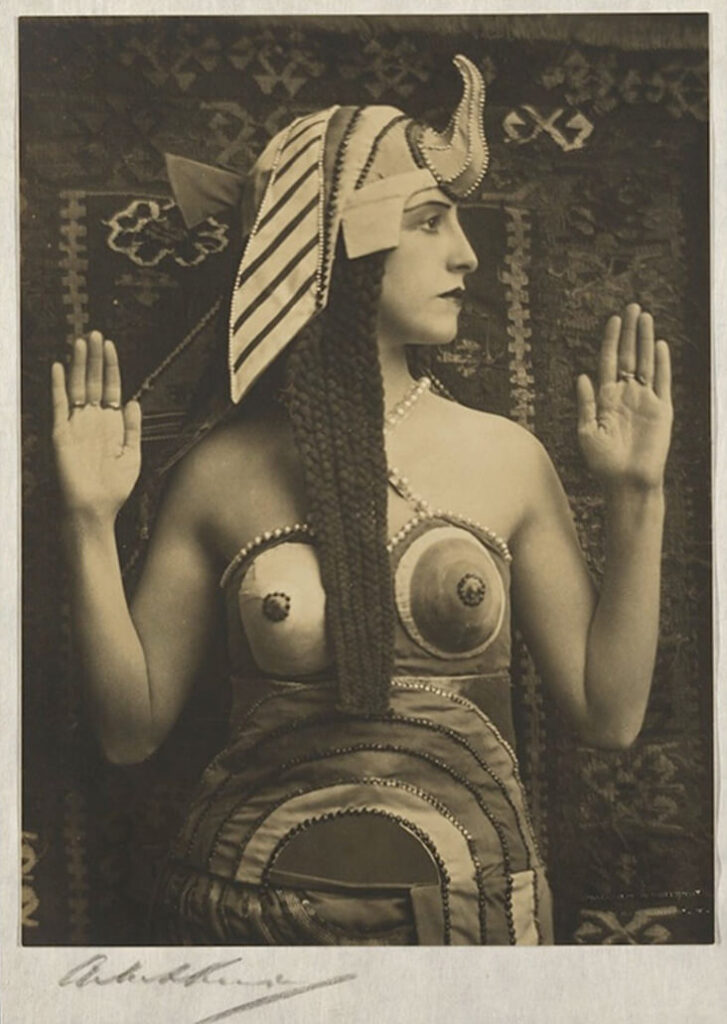 Russian-French artist Sonia Delaunay was one of the world’s greatest polymaths, spanning a huge range of disciplines from painting to textiles, fashion, costume and set design. Her whirlwind patterns and colours attracted the attention of the great ballet director Sergei Diaghilev in the early 20th century, and it was he who first encouraged her to delve into the world of theatre and costume design. Their friendship pushed Delaunay in bold, adventurous and surprising new directions, and she would spend the rest of her career experimenting with the incredible, transformative possibilities of brightly coloured fabric, both on and off the theatrical stage. 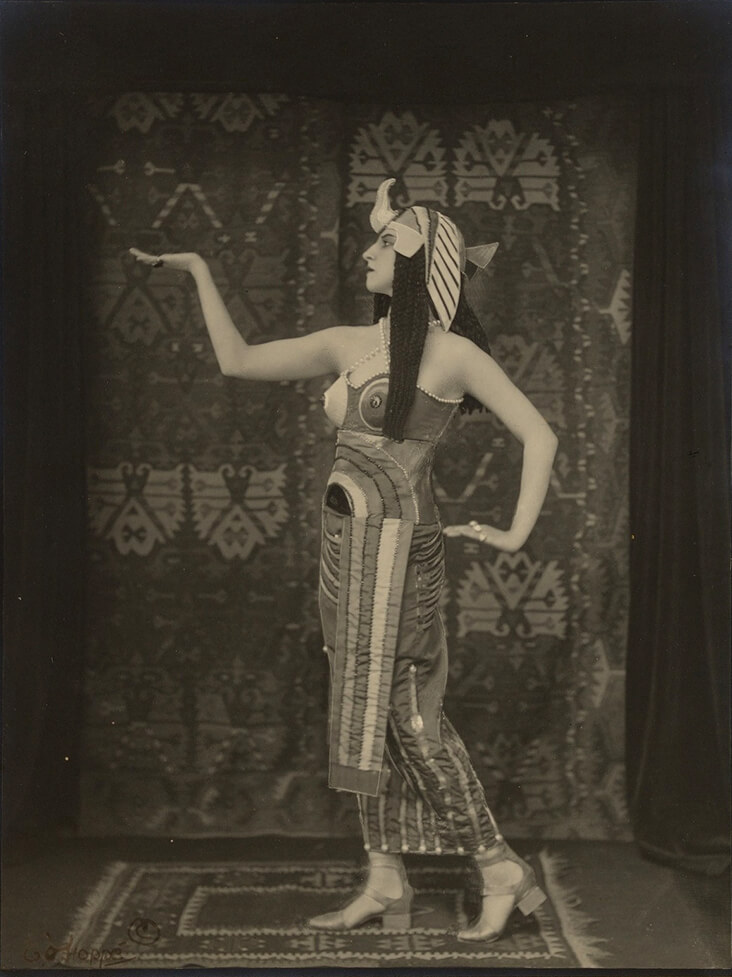 Delaunay’s career began in Paris, where she had fled from her native Russia to find freedom and independence. Born as Sarah Turk to a family of Russian aristocrats, she married the artist Robert Delaunay and changed her name to Sonia Delaunay, marking a new chapter in her life. Family fortunes from rented property kept her afloat during these early years, allowing Delaunay complete freedom to experiment with artistic expression. She moved seamlessly between disciplines, creating paintings, posters, textiles and clothing, an all-encompassing approach united by a love of vivid, intense colour and abstract geometric patterns, which she called simultaneisme.

Delaunay was living in Madrid when the Russian Revolution broke out and Bolsheviks seized her family property, leaving her with no stable income and a sudden need to make money. Diaghilev first met Delaunay during this time and offered her a lifeline, inviting her to design costumes for his Ballets Russes production of Cleopatre in 1918, a reworking of an earlier performance first styled by the Russian artist Leon Bakst. With her fine needlework skills and adventurous approach to colour, Delaunay adapted quickly to the new role, impressing Diaghilev with her flair for detail and precision. 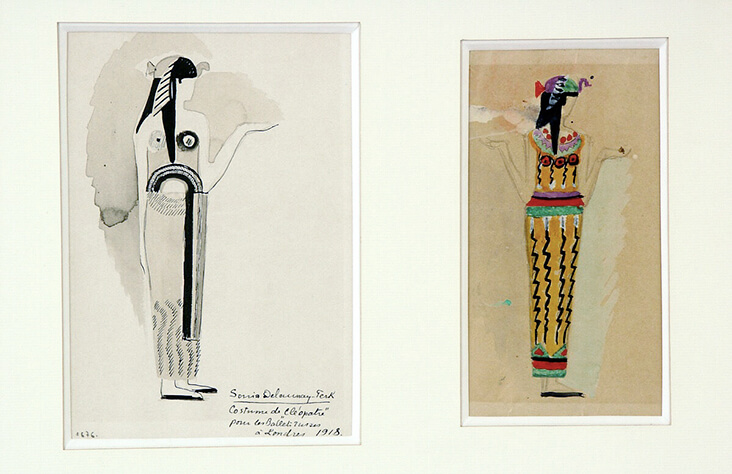 In contrast with the designers, Diaghilev had worked with before Delaunay had an entirely different energy, bringing an awareness of high fashion and Parisian haute couture to the ballet stage. Her prima ballerina Cleopatre costume was the showcase for this radical new approach, rejecting earlier ornamentation and frou-frou skirts for an edgy, streamlined and entirely modern design with a high bodice, straight waist and tasselled fringing that reflected the street fashion of the time. The design was produced in the atelier of popular Parisian couturier Paul Poiret, emphasising Delaunay’s desire to produce garments of the highest quality. This new approach brought costume design closer to the experience of ordinary life, an attitude in keeping with Delaunay’s wider attitude that art and life should merge together into one.

Another striking aspect of Delaunay’s costume designs was her innovative approach to pattern and colour; as with her brilliantly bold Orphist artwork, her characters were dressed in dazzling textile patterns made from concentric circles and daring zig-zags, emphasising the movement of the dancers bodies as they leaped through space across the stage. She marveled at how colour could enliven the dancers with excitement, energy and drama, enhancing their ability to convey pivotal aspects of the story as it unfolded in time. 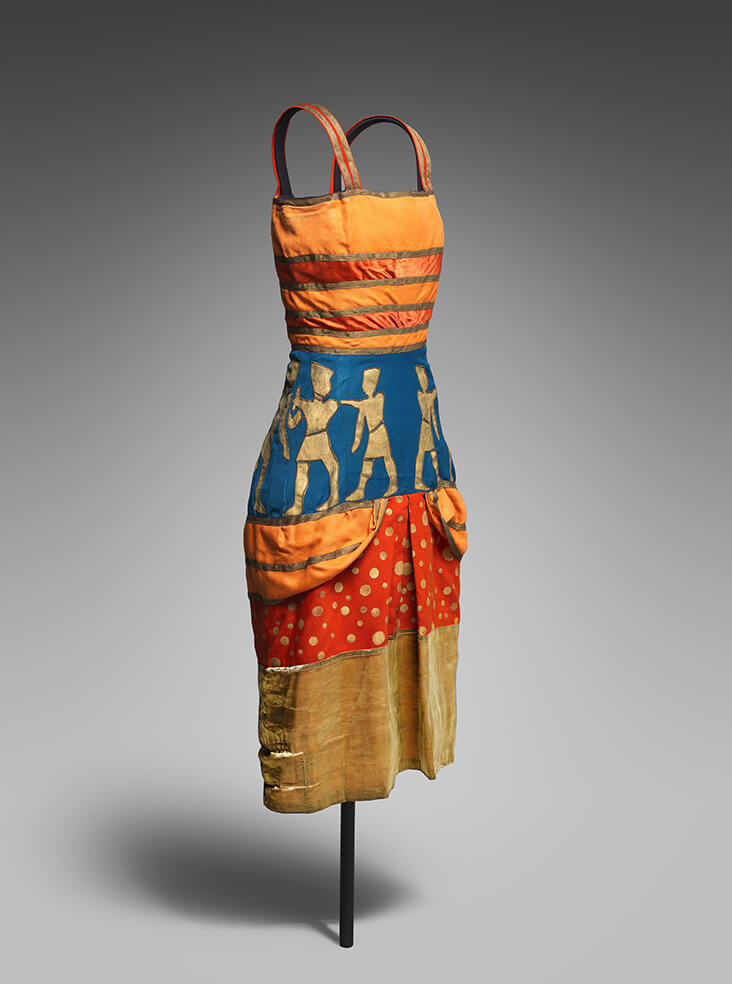 Delaunay’s designs for Cleopatre were an immediate hit with European audiences when the show was unveiled in Madrid in 1918, launching her career as a reputable designer for both costume and fashion. Following on her runaway success with Diaghilev, Delaunay launched her own popular fashion and interior design shop, ‘Casa Sonia’ in Madrid in 1918. On her return to Paris in the 1920s, Delaunay launched her own fashion studio, creating clothing for a series of high-profile clients, and she also continued to produce elaborate and adventurous costumes for ballet, film and opera productions for the rest of her long and prolific career, bringing her awareness of fashion trends to the world of theatre and film.

Throughout all her creative endeavours Delaunay maintained a restless and inquiring eye, believing that fabric, clothing and patterned textiles could bring art out from the gallery walls and into the lives of ordinary people, where it could truly life and breathe in amongst everyone. Her collaboration with Diaghilev played an instrumental role in achieving this vision, opening up a playful and expansive new arena, where almost anything seemed possible.