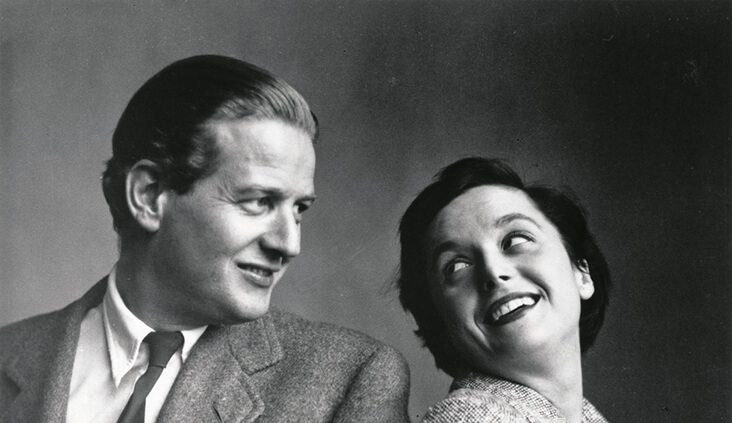 One of America’s most iconic furniture brands, Knoll was founded by the formidable husband and wife team Florence and Hans Knoll. Emerging out of post-war New York, their sleek, polished designs introduced the Bauhaus style into American society, emphasising function, form and simplicity over decoration and ornament. They pioneered the modern, open-plan office, believing furniture should complement and work with the architecture around it, creating, rather than taking up space. Working as a team, Hans ran sales and finance, winning over customers with his ineffable charm, leaving the sharp, innovative Florence to steer the design side. Their teamwork was short-lived, lasting just over a decade before Hans’ untimely death, but the foundation they built was so rock solid, the company is still going strong today. 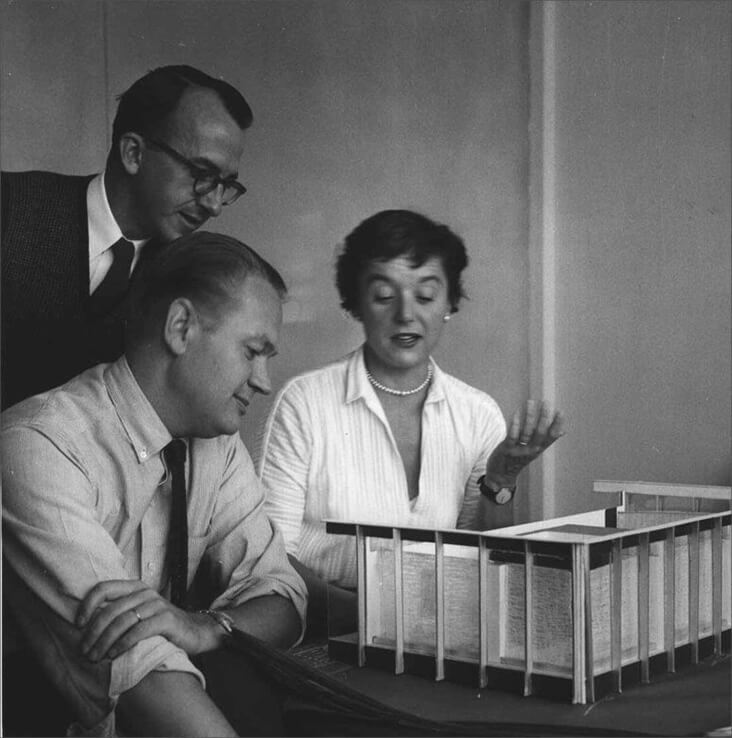 The story of the Knoll company begins with Hans, whose family ran a successful furniture production company in Germany, producing modernist designs by some of Europe’s leading innovators linked to the Bauhaus School, including the Werkbund collective and Mies van Der Rohe. From an early age Hans was apprenticed in the family business, where the foundations of high-quality craftsmanship and ergonomic design were embedded into his mind. 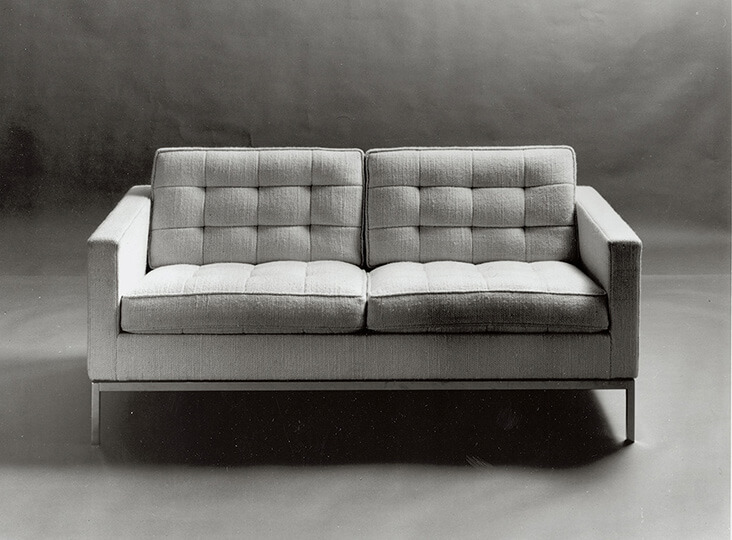 The FKB Lounge Collection (1961) Image from the Knoll Archive

In 1938 Hans set off across the Atlantic to establish his own furniture production company, titled Hans G Knoll Furniture, introducing the United States to the latest Bauhaus-inspired designs. “It was my whole idea,” he later remembered back, “to develop new products working with well-known designers and to encourage their particular talents.” One of the company’s first leading designers was the Danish Jens Risom, who worked closely with Hans to produce a series of Scandinavian-inspired wood pieces.

Florence Marguerite Schust was born in Saginah, Mich , orphaned by the age of 12 was virtually adopted by Eliel Saarinen and his wife, Loja, who later had an influence on her interest in architecture and design. Florence first trained as an architect at the prestigious Cranbrook Academy outside Detroit, which promoted Bauhaus ideas around space, simplicity and modernity. During her studies Florence was apprenticed with Bauhaus emigres Marcel Breuer and Walter Gropius in Boston, before completing her studies at the Illinois Institute for Technology in Chicago under Mies van Der Rohe – this extensive experience with European designers gave Florence a fundamental understanding of Modernist design that would later lead to the success of the Knoll company. In 1941 Florence moved to New York to work as an interior designer for Harrison & Abramovitz, and it was during this time that she first met Hans. 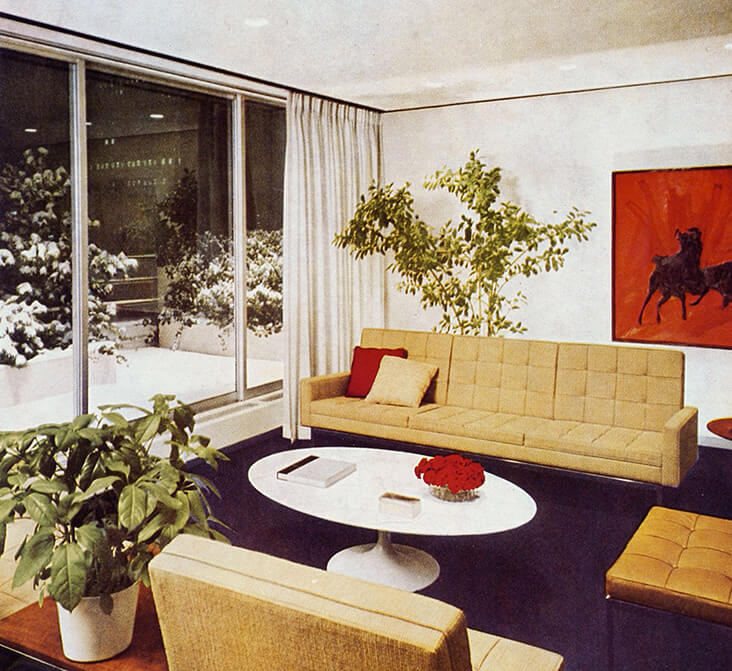 Florence became involved with Hans’ company in the early 1940s and by 1943 she was working as a lead designer. Her background as an architect undoubtedly influenced the nature of her furniture and interiors – she produced clean, simple objects that allowed air to circulate around them, such as glass topped tables with thin metal legs, low level seating and clean, geometric sofas, chairs and footstools made from polished leather and steel. The refined finish Florence achieved was the result of restless, dogged determination, as her friend Bob Longwell observed, “She had that ability, to critique [something], to tear it apart and put it back together. She was something else.” 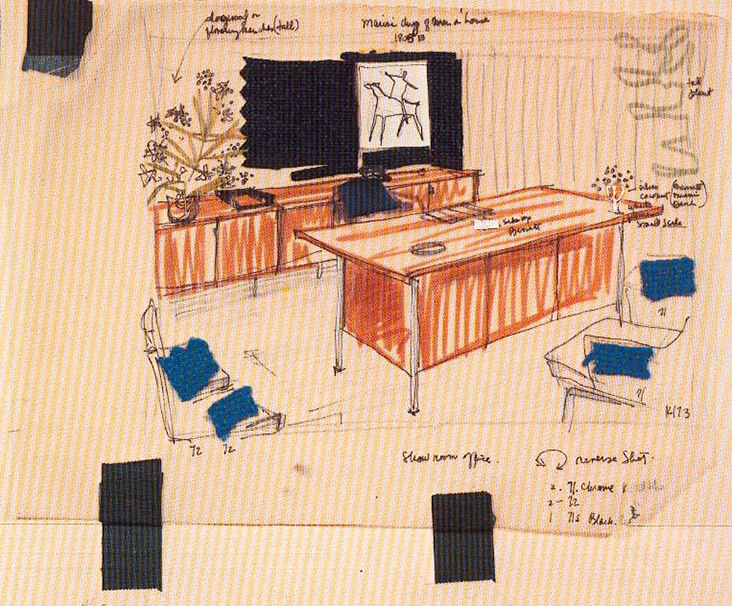 Hans and Florence shared a deep, mutual appreciation of European Modernist design and together they were able to steer the company from a fledgling business into an international success. Hans managed the sales and finances with his charismatic and persuasive temperament, while Florence led the company’s innovative design vision. This profound meeting of minds between Hans and Florence was both personal and professional; in 1946 they married, and in the same year the business name was changed from Hans G Knoll Furniture to Knoll Associates, acknowledging Florence’s equal partnership in the enterprise.

Working as a bespoke interior designer, Florence modestly described her own designs as the “meat and potatoes”, the background spatial building blocks that would allow the room to breathe, inviting in other innovative designers including Eero Saarinen, Harry Bertoia, and Mies van der Rohe to create additional standout pieces in curvaceous shapes and forms, likening this background-foreground relationship to the “figure-ground” methods of painting she had been taught as a student. “I designed the architectural spaces that were needed to make the room work,” she noted, “things like the walls, or the sofas.” 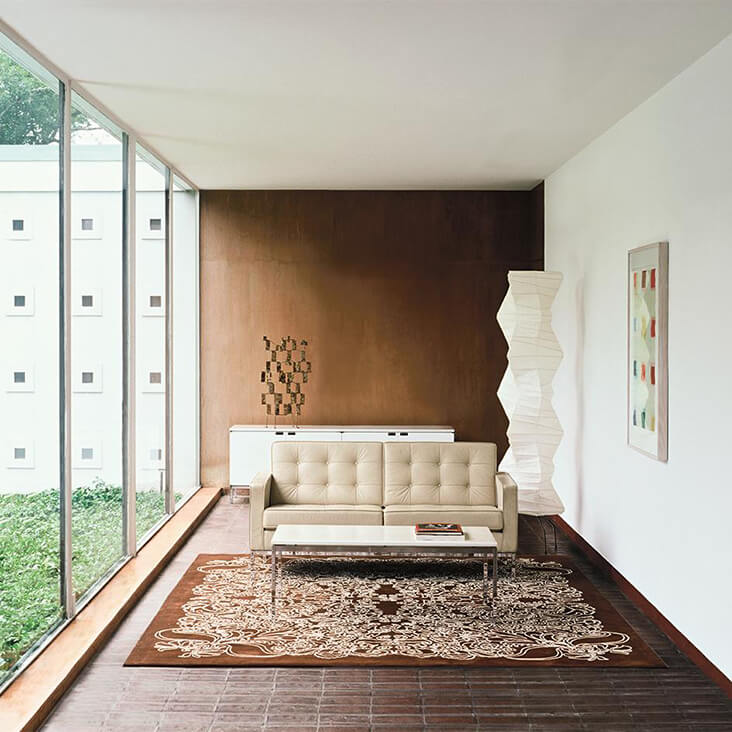 Throughout the 1950s Florence moved the company’s design vision from residential to office space, revolutionising a new approach to office design which she called the Knoll Planning Unit, an interior design method that merged the clean minimalism of metal and glass with a humanising touch through sumptuous leather, vivid accents of colour and bespoke Knoll textiles. They designed office spaces for some of the world’s leading industries, and their trademark look came to epitomise the “Mad Men” look of corporate culture throughout the 1950s. 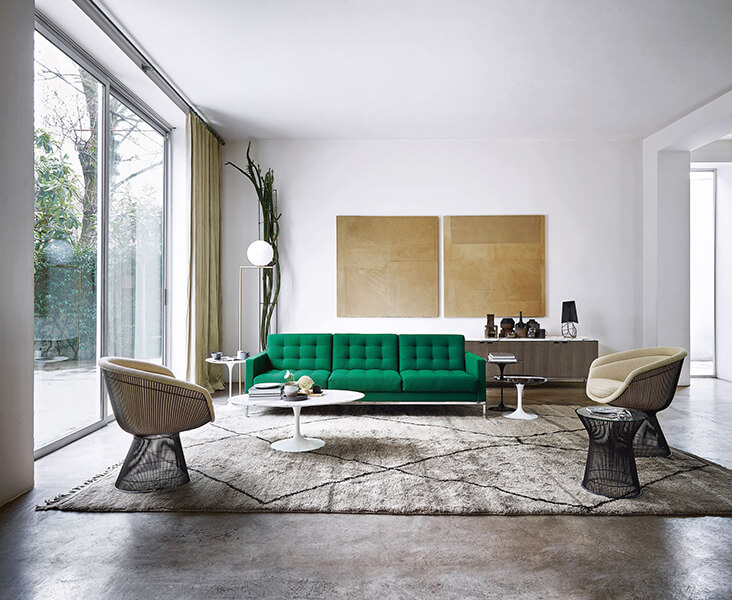 In 1955, Hans tragically died in a car accident, leaving Florence to steer the Knoll ship alone. With grit and determination, she took on the role of company president, driving the company forward for another decade before finally retiring in 1965. By then, Knoll had achieved world-wide recognition as an unstoppable powerhouse, one that still continues to combine high-quality craftsmanship with radical innovation to this day.

A World of Escapist Wonder: Diaghilev and Bakst

Sergei Diaghilev and Leon Bakst were two fellow Russians of monumental talent, whose partnership became one of the most radical of the early 20th century. Leon Bakst was the first artist that Diaghilev would work with on his Ballets Russes in Paris, and together they transformed the theatrical stage into a living canvas, revolutionising ballet…