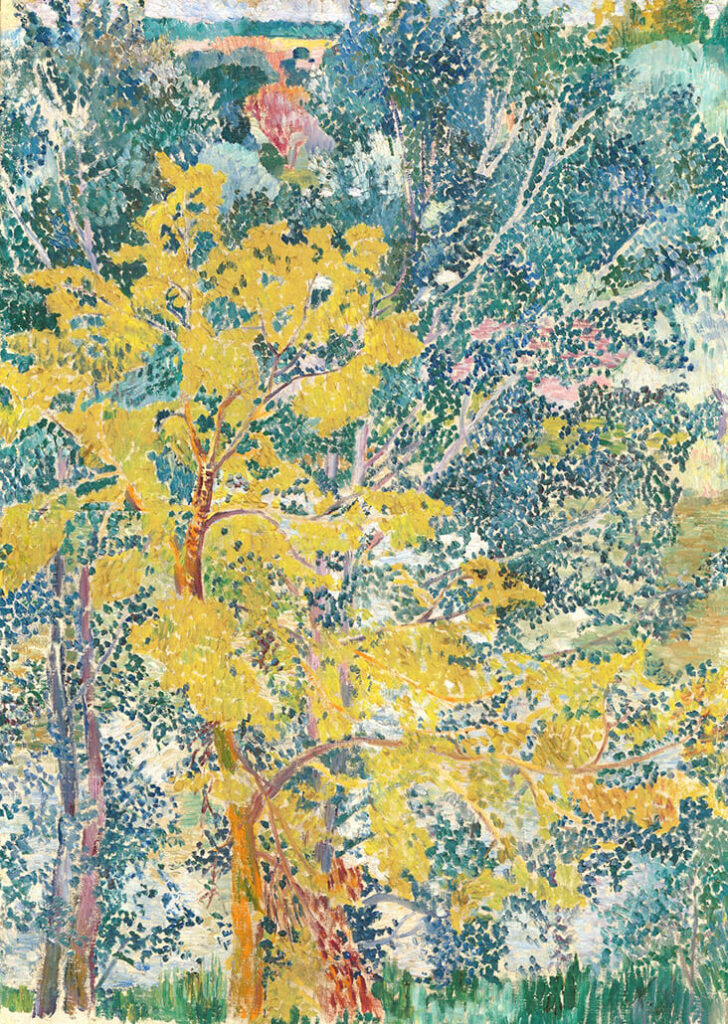 A fresh, cold breeze seems to bristle through Russian painter Natalia Goncharova’s paintings, created through sharp, biting and invigorating colours like that of FEATHER Linen. Leader in the Russian 20th century avant-garde, Goncharova was wildly inventive and prolific, working across a huge range of styles, techniques and mediums to produce some of the most important works in the history of art. But pulling all her ideas together was a deep love for her Russian heritage, which she celebrated throughout her long and prolific career through her own language of vital colours and stylised motifs. 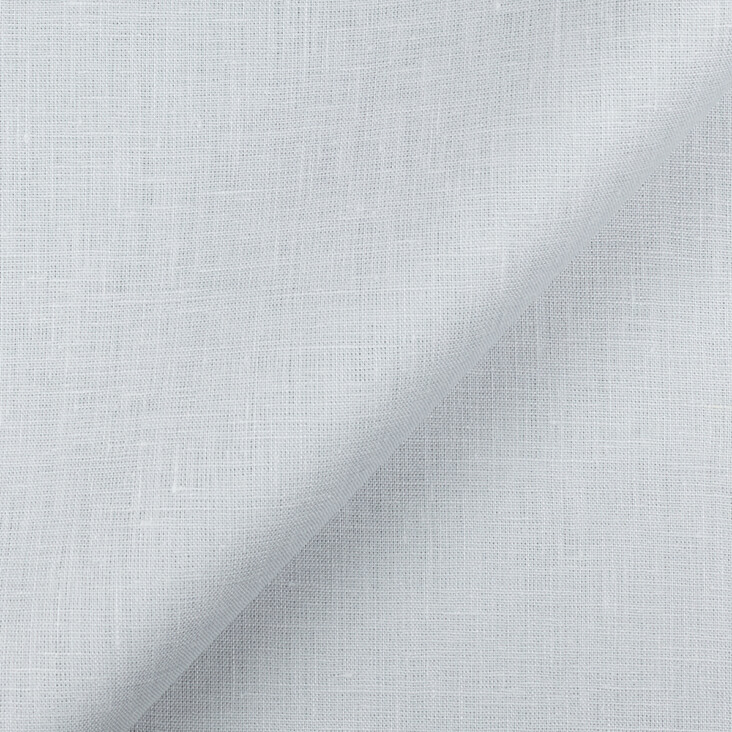 Goncharova was born in 1881 in the small town of Negaevo in the Tulin Province of Russia to a family of wealthy landowners. From a young age she watched people working closely with the land and developed a deep respect and admiration for their hard-won efforts. She also adored the vivid colours and patterns of Russian folk art that filled her and her neighbours’ homes, and as adult it would continue to inform many of her artistic ideas. Even after the family relocated to Moscow when Goncharova was 10, she still referred to herself as a “country girl.” 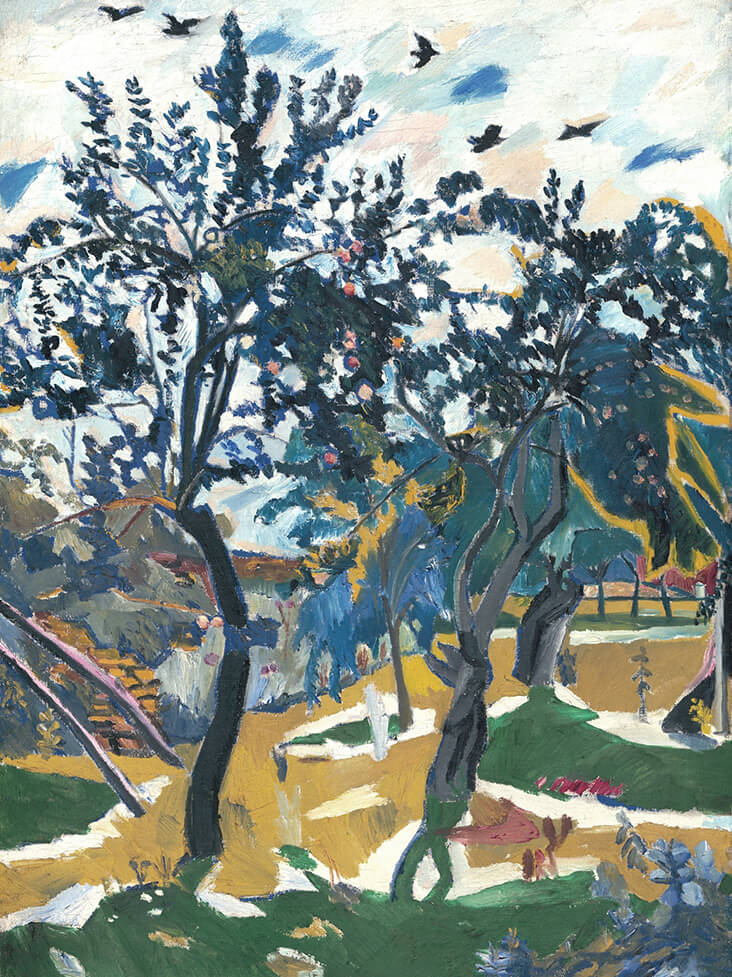 Goncharova remained in Moscow throughout her early career, training at the Moscow Institute of Painting, Sculpture and Architecture, initially studying sculpture before shifting to painting on the realisation of her natural affinity towards colour. In her early years as a painter Goncharova was greatly influenced by Impressionist and Post-Impressionist art, observing nature with a keen, close eye before replicating its patterns of light onto canvas with flickering patterns of energised paint. With her partner Mikhail Larionov she visited the Crimea from 1903 onwards, making endless studies of the natural scenery around her. The artwork Landscape (pointel). 1907- 1908 encapsulates this spirit of light and movement with fresh, lively colours applied in tiny Pointillist style dots that seem to shimmer and dance in the fresh air. All around these dots a cold, hazy blue breeze seems to drift, just catching and colouring the tips of the leaves here and there.

Made during a slightly later phase, Windy Day, 1908-1909 captures the bracing light and movement of a cool, bustling day as a landscape view is broken apart into Cubist style shards of colour to suggest energy and movement. Vivid colours are flattened into broad planes, mirroring the styles of Paul Gauguin and Pablo Picasso, but by now Goncharova was also looking to the blocky languages of traditional Russian lubok posters and Byzantine icons for a distinctively Russian take on the avant-garde. Goncharova also brings her own distinctively fresh colours into the scheme, particularly in the sky, where a pale, iridescent blue ripples through dappled clouds suggesting cool, refreshing air. 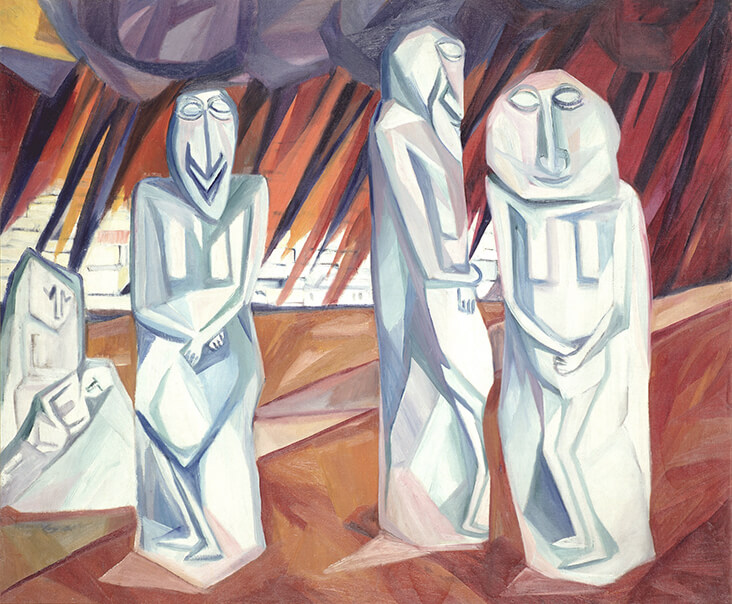 The later Salt Pillars, 1910, was made in reference to the Biblical story of Lot, whose wife looked back at the destroyed city of Sodom after being told not to, and was subsequently turned into a pillar of salt. A strong feminist, Goncharova undoubtedly chose the subject to celebrate the defiance of women in the face of the controlling patriarchy. The work also continues with Goncharova’s rebellious and progressive style of art, combining Russian iconography with European modernism as carved, totemic figures are arranged into a blocky, stylised composition of crude, angular shards. Her icy, pale blue light breezes through this work once more, conveying the pristine, glistening surface of the salt as it moves in and out of the light to create mesmerizing, prismatic patterns.