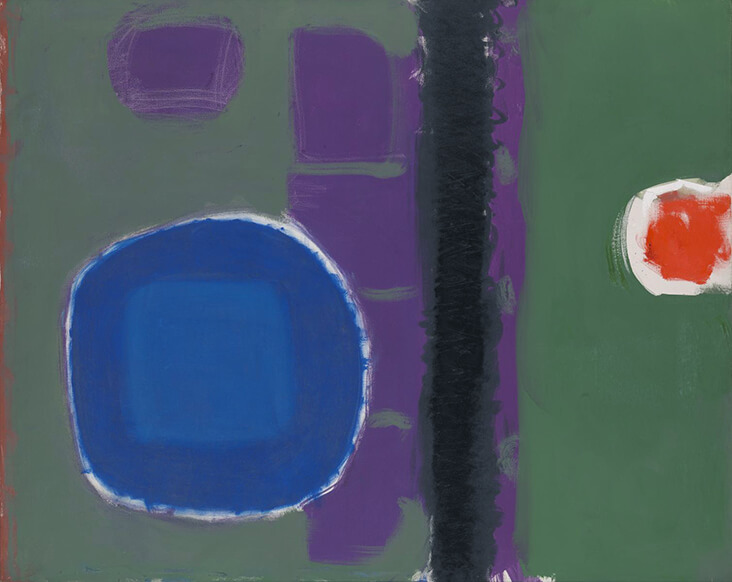 Vivid, intense colour emanates from British artist Patrick Heron’s work, infusing it with glowing, atmospheric light. The rich, deep violet shade of FIESTA MARINA Linen was a tool in his belt that he would employ to create pockets of cool, wintery darkness, cut into with shards of vivid, acid bright colour, or intensified further with dark shadowy greys. Like many artists from the St Ives School of Cornwall, Heron merged the languages of European, avant-garde abstraction with references to the wild Cornish landscape, producing works of art that truly capture a spirit of time and place. 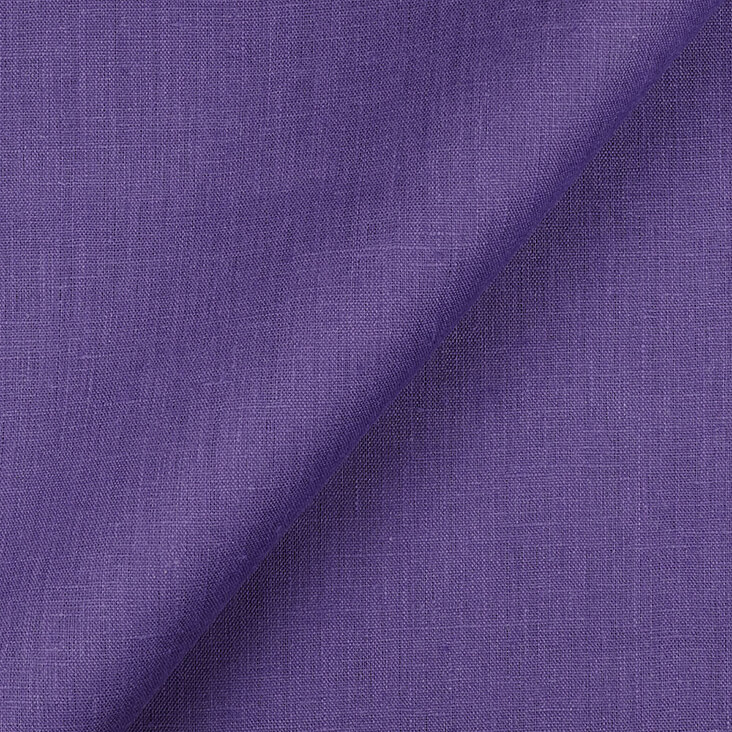 Born in Yorkshire in 1920, Heron’s family moved to Cornwall when he was five years old. Cornwall would become an important strand of his identity – he chose to remain here for most of his adult life and the landscape undoubtedly shaped the nature of his art. Heron’s father was a clothes manufacturer who founded the firm Cresta Silks, and Heron began designing silk scarf patterns for his father at the tender age of 14. Three years later Heron went on to study at London’s Slade School of Art, but he kept returning back to the Cornish countryside to make sketches amongst the wilderness. A conscientious objector during World War II, he worked as an agricultural labourer, before moving on to work at Leach Pottery Studio where he met and became close friends with artists from the leading St Ives School including Ben Nicholson, Henry Moore and Barbara Hepworth.

Like many artists associated with the St Ives School on Cornwall, Heron’s early paintings of the 1940s were greatly influenced by the vibrant and expressive styles emerging from avant-garde Europe, where colour and representation were being played with in daring and experimental new ways – Heron was particularly taken with the work of Paul Cezanne, Henri Matisse and Georges Braque. Within his own work, Heron painted expansive landscape and interior views with flat panels of vivid colour and scrawling, expressive lines. But it was the bold confidence in the American schools of Abstract Expressionism and Colour Field Painting that had the most profound and instrumental impact on Heron’s practice in the decades that followed, eventually leading him towards his signature style of abstraction. 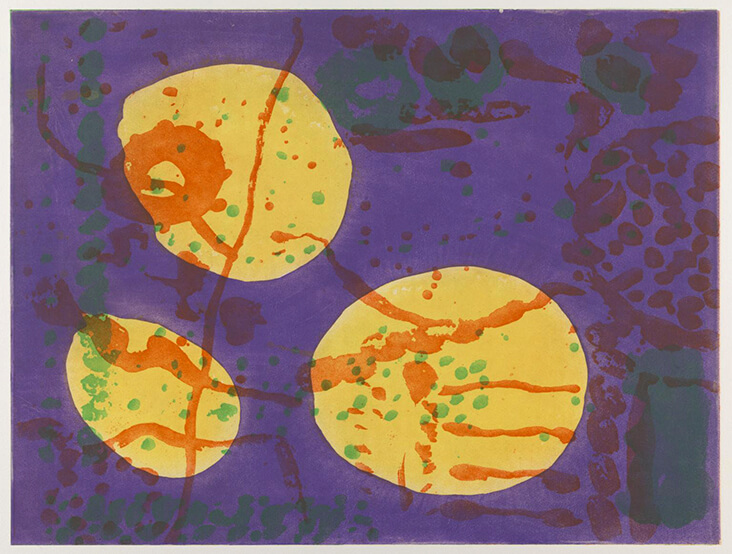 By the 1960s Heron had almost entirely abandoned representation, exploring instead how vibrating colour patterns could convey emotional resonance, although the stunning scenery of Cornwall always seemed to be at the back of his mind. Green and Purple Painting with Blue Disc : May 1960, is a murky green as dark as a winter field, while purple blocks enliven the surface with sharp, bristling life, jostling beside daubs of electric blue and citrus orange. Allusions to landscape seem evident here, as a series of defined, organic forms float amidst wide open space.

Heron’s later paintings were often titled after the date and time when they were made, emphasising his desire to capture on canvas the fragile essence of a moment in time. January 9 : 1983 : II, is an ode to the British winter, as bare, branch-like shapes stretch around a crimson red sunset. Freezing drops of mint green dribble towards the centre, where a pool of deep violet is as dark and entrancingly dangerous as black ice. 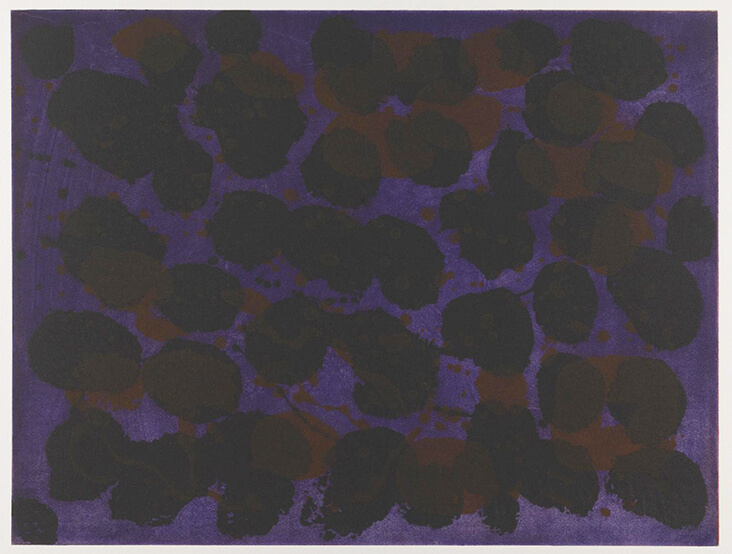 Alongside painting Heron was a keen printmaker throughout his career, exploring various techniques including monotypes, lithography, silkscreen and etching. In printmaking he found new ways of layering tones and textures of colour alongside one another to create a striking visual impact. Both Brushworks No. 3 : 1998-1999 and Brushworks No. 6 : 1998-1999 were made as part of a suite of etchings Heron designed in the final months of his life.

In his earlier paintings Heron would keep patches of colour isolated and distinct, but this late series marks a new departure as colours are layered on top of one another in expressive streaks, stains and dribbles. In Brushworks No. 3., Heron’s trademark purple hue stains the entire background with mysterious shadow, while glowing orbs of pale-yellow light emerge from its midst like moonlight. Across the entire panel rivulets of caramel brown are drizzled across the surface, resembling branches reaching out over the night sky. The same wintery purple also dominates the backdrop of Brushworks No.6, but here speckled patches of grey and brown form dark silhouettes on its surface, allowing this deep violet’s enigmatic radiance to shine through.