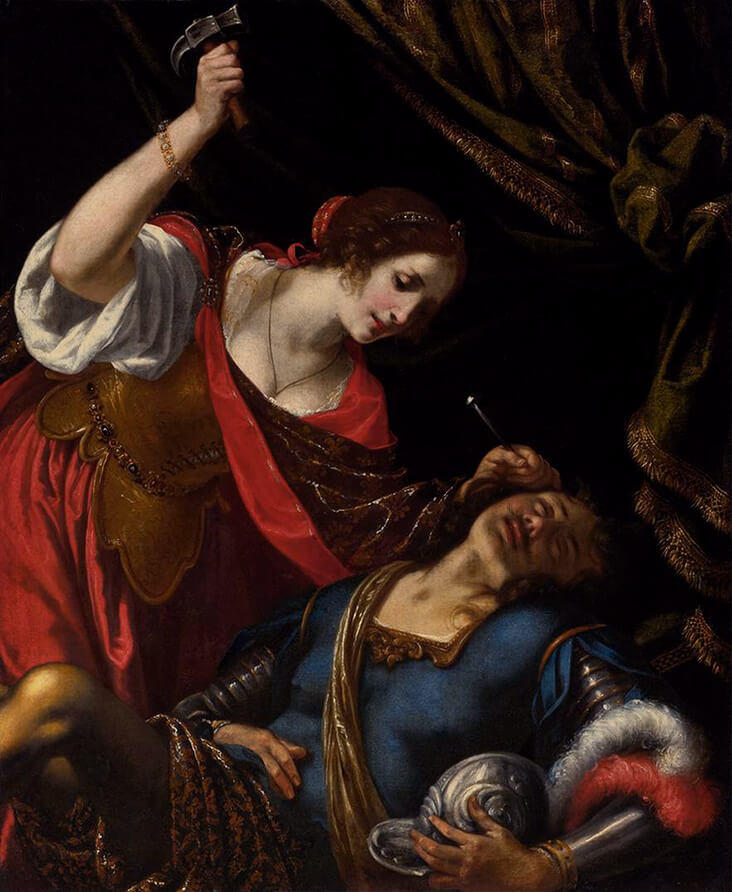 Dark, brooding and dramatic, the intense blue of COBALT linen was ideal for Renaissance painter Jacopo Vignali’s heightened, operatic scenes. A leading painter in the Florentine seicento, Vignali’s Baroque paintings were defined by flowing swathes of jewel-toned fabric in midnight blues and crimson reds; set amidst theatrical, directional light, these richly toned colours amplify the romantic agony and tragedy of his stories.

Vignali was born in Pratovecchio near Arezzo in Italy in 1592. Employed in the studio of Matteo Roselli from the early 17th century, Vignali later enrolled at the Accademia del Disigno in Florence in 1616, where he became a full academician in 1622. Known for painting wealthy gentlemen in his early career, Vignali’s portraits were much sought after for their exquisite luminosity, in both human skin and ravishing, sumptuous fabric in a variety of weights and textures, skills that came bursting to life in his later narrative scenes. 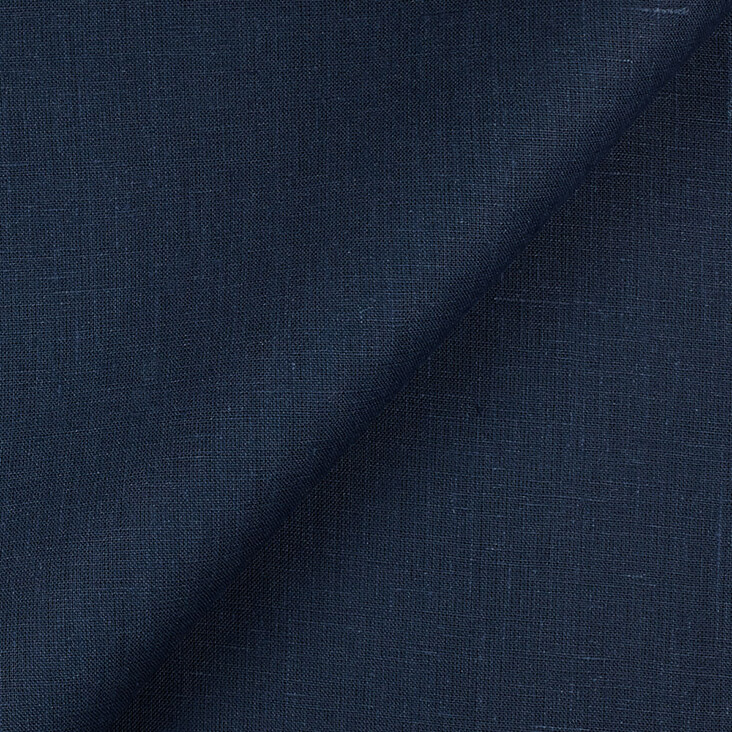 Throughout the 1620s Vignali employed new confidence with colour, lighting and facial expression, producing frescoes throughout the city of Florence for the wealthy Medici family, as well as standalone works of art. In the painted panel The Archangel Michael, 1620, Vignali portrays the all-powerful angel as a heady mix of youth, beauty and valour. The indulgent satin fabric of his blue tunic echoes the colour worn by Roman soldiers, weaving in and out of the light with a glossy, luxurious sheen, invoking strength and depth of character.

In the 1630s Vignali intensified the chiaroscuro of his paintings, casting glistening light across a range of conflicting surfaces. Both colour and subject matter turned dark, as seen in The Judgement of Solomon, 1632 portraying the Biblical story of Solomon, who must decide which of two women is the real mother of a baby boy. As a trick, Solomon threatens to cut the child in half so each can take a share, but the real mother surrenders the child to the other woman, just to save his life, thus revealing her true identity. Burnished in warm shades of gold, green and red, the scene takes on a regal splendour, sharply contrasting with shards of cold, shadowy blue in the centre, where the central female, the real mother, is frozen with shock. 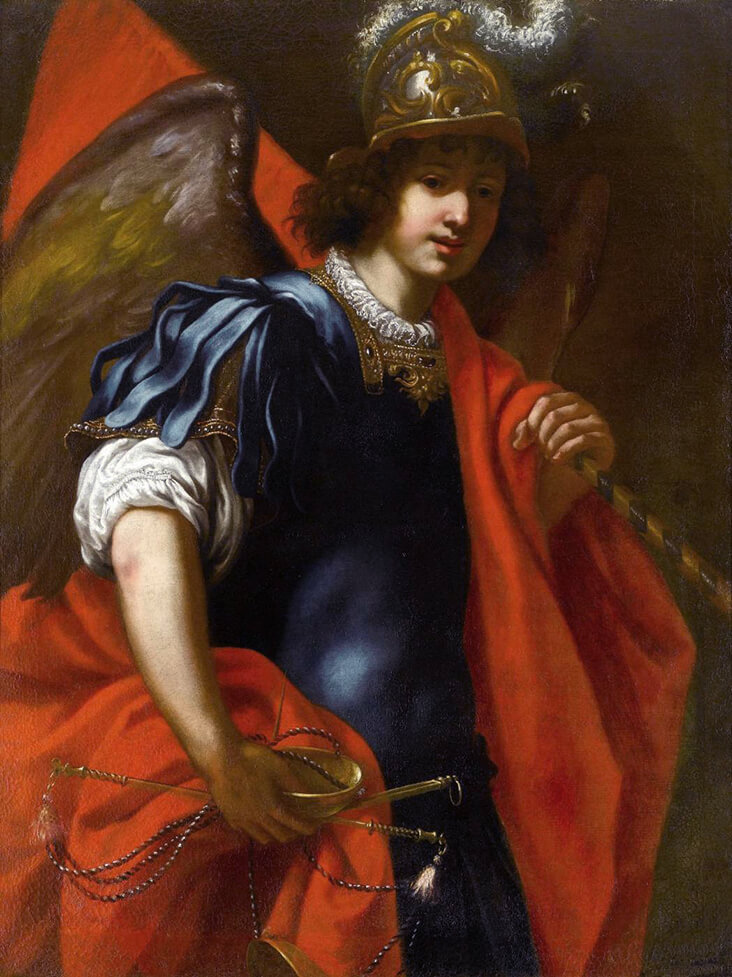 Painted two years later, Rinaldo and Armida, 1634, portrays a scene from Renaissance writer Torquato Tasso’s poem Jerusalem Delivered, 1581, which has fascinated artists, writers and composers for centuries. Vignali paints Rinaldo, a Christian knight, reclining across the scene as he falls under the spell of the enchantress Armida. Casting aside his armour, his hypnotic, cobalt blue robes flow in rivulets across the scene like a river of water, and Armida is entranced. Though she had planned to kill him, instead she falls in love, adorning him with flowers and taking him captive on her magical island. 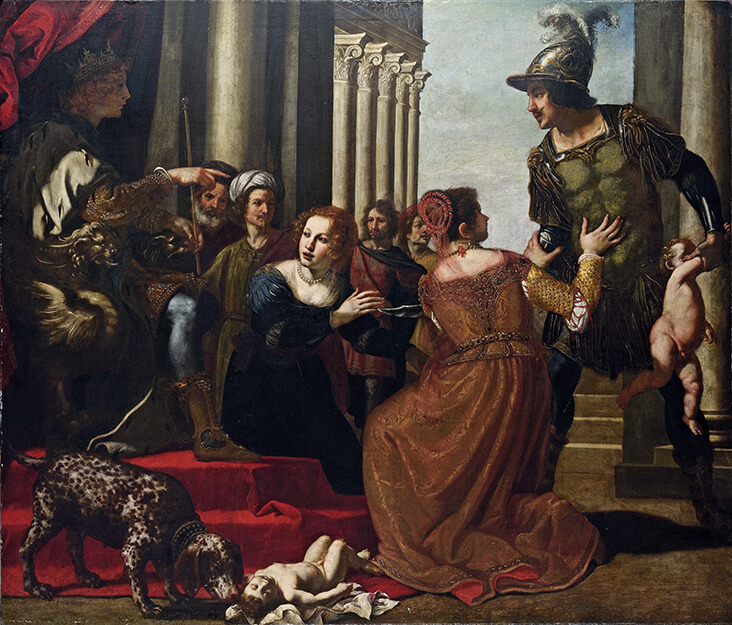 The Judgement of Solomon, 1632

A remarkably similar composition is seen in Vignali’s Jael and Sisera, also painted in the 1630s, as a man falls under the spell of a powerful woman. Taken from the Biblical story of Jael and Sisera, Vignali paints the moment when Jael, a Kenite woman, slays the cruel leader Sisera in his sleep, in order to save Israel from ruin. Many artists of the Baroque and Renaissance were drawn to the complex character of Jael, who, like Delilah and Judith, represents a domineering female lead, inverting the male-dominated hierarchies of the time. Colour is deeply symbolic here; Jael is the red temptress, leading Sisera astray, while he falls into a cold, shadowy blue sleep from which he will never wake.