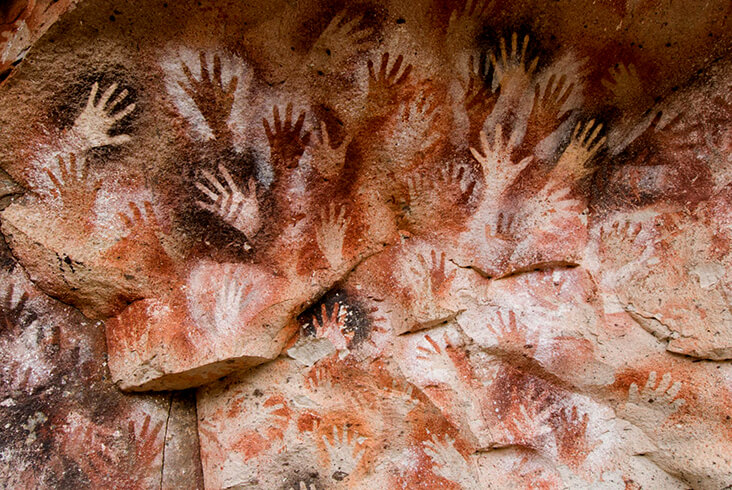 The warm, earthy resonance of red ochre is steeped in history, carrying within it the weight of human survival. The first red pigment ever discovered, ochre was derived from iron rich rocks containing hematite hundreds of thousands of years ago, a highly pigmented mineral that easily stained the skin and could be shaped into sticks, or ground into a fine, powdered pigment. In early cultures, the colour’s resemblance to blood linked it to fertility, life and growth, a symbolism that has persisted throughout the ages.

The oldest paintings in the world were made at least 70,000 years ago, where red streaks, lines and shards illustrating raging bulls and hunters told fragmentary stories of bloodthirsty survival. But recent evidence has traced back our human interactions with red ochre at least 100,000 years, following the discovery of the Blombos Cave in South Africa, known as the “red ochre paint factory”, where tools and pigments for painting were discovered. It is thought these early, primitive cultures had multiple uses for the pigment, not just for mark making on cave walls, skin and clothing, but as a medicinal salve to prevent sun burn, clean hair, repel insects and preserve leather. Many indigenous cultures still use red ochre for these purposes today, including the Himba people of northern Namibia, who are famous for mixing ochre with butterfat to make an otjize paste as a protective coat for their hair and skin. Its function as a sunscreen may have made red ochre instrumental in extending human endurance, linking it with the ability to travel longer distances in search of food and shelter. 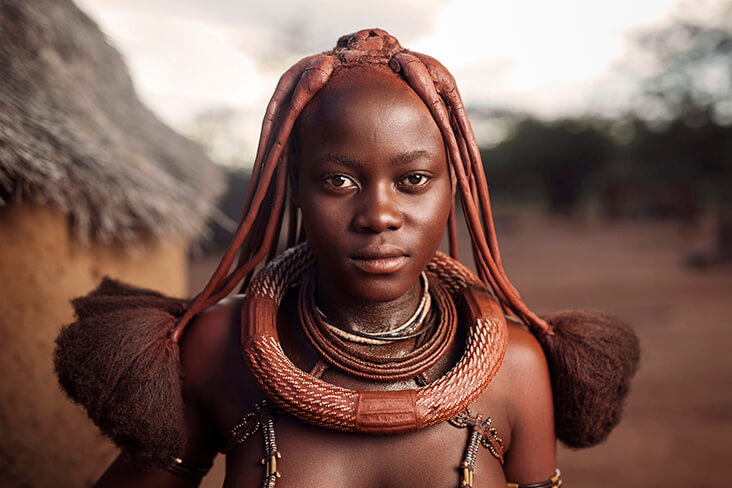 Evidence suggests early cultures were attaching magical, symbolic properties to the potent pigment – it was scattered over the graves of the dead as a form of respectful ritual, seeping into the ground and even staining their bones, signaling a return to the earth or rebirth in the afterlife. Warriors in many tribes also covered weapons, objects, animals, and trees in red paint, believing it would lend them magical, supernatural powers.

Evidence of red ochre continued throughout the centuries as civilizations developed, appearing across Europe, the Middle East, Southeast Asia, Russia and Australia. In ancient Egypt, red minerals were abundant in the landscape, leading them to play a prominent cultural role. In paintings, red was more commonly used to portray men’s skin, but Egyptian women were often painted wearing red clothing and used the red ochre pigment to stain their lips and cheeks, invoking some of the early sexualized associations that were to come with the colour red. Both men and women dyed their clothing red, or painted their bodies with red ochre during celebrations, associating the colour with life, health and victory. They also tapped into its healing properties, using red ochre as a medicinal salve for intestinal and eye problems. 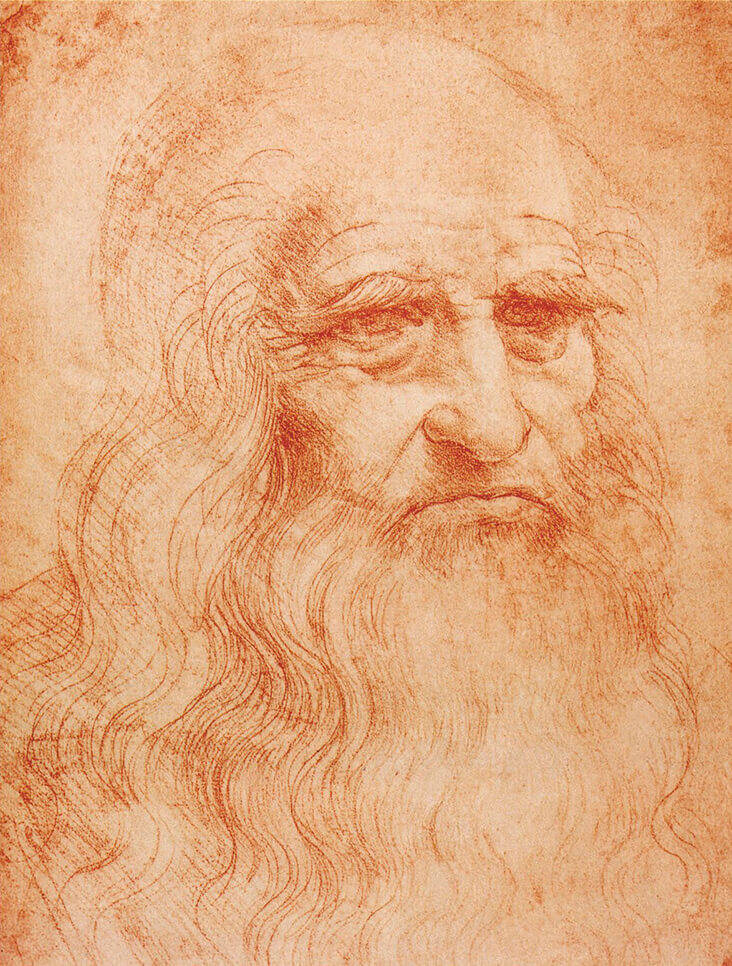 Red ochre continued to be popular in ancient Greece and Rome, appearing in wall art, interiors and clothing. Referring to the ochre family of colours as “red earths”, Ancient Roman author Pliny observed them to be “found in abundance in many places.” A particularly rich, deep red ochre mineral was found in the modern-day Turkish area of Sinop, a colour which became much sought after and valuable, which Greeks and Romans came to call Sinope, and later Sinopia. The ruddy colour was associated with power and valour, while Roman soldiers wore red tunics and would paint their bodies entirely in red to celebrate victories fought and won. 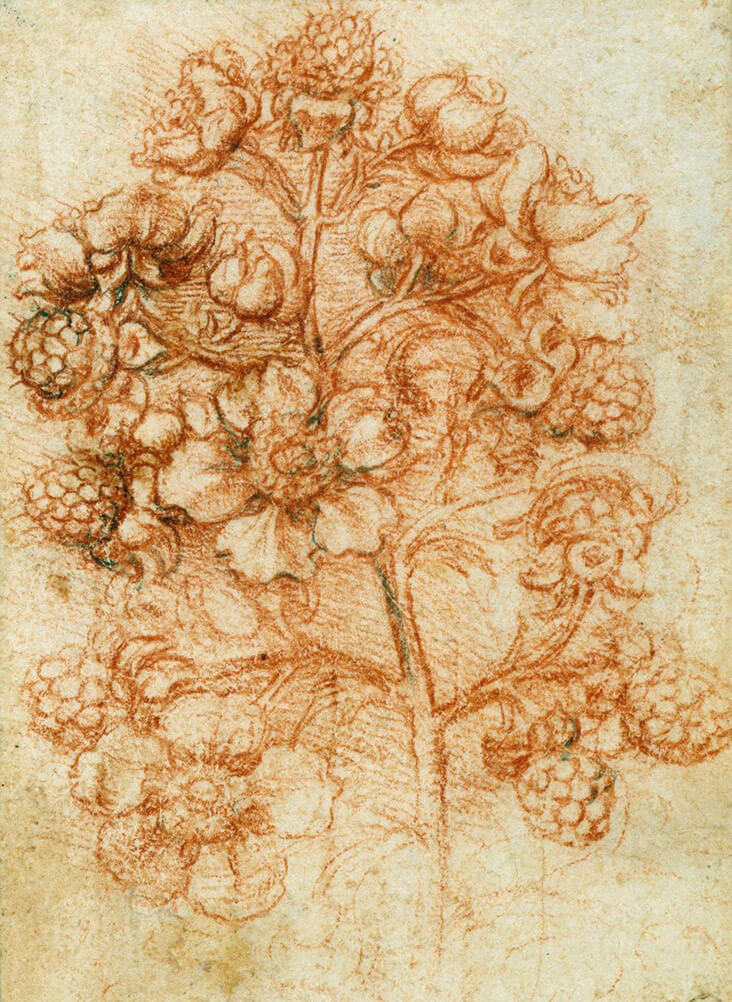 Throughout medieval culture and the Renaissance, red ochre appeared in drawings, paintings and fabrics, at a time when Biblical literature and symbolism informed the majority of art production, while this earthy shade of red continued its associations with fertility and nature. Italy produced various shades of rusty toned earth that were made into pigments and crayons, leading to some of the most important works in the history of art. These include Leonardo da Vinci and Michelangelo’s sepia tinted drawings on paper, often portraying figures, animals, and plants with exquisite detail. During the Dutch Golden Age, earthy reds also featured prominently; Johannes Vermeer painted on a ground of red ochre to lend all his tranquil scenes an underlying warmth, while Rembrandt van Rijn explored how the pigment could create warm, glowing scenes, particularly when painting the women he had fallen in love with.

In recent times, the naturally occurring shades of red ochre have largely been replaced by synthetically manufactured red oxides which are much easier to reproduce. But for those seeking it out, it is still possible to buy paints and pigments made from this raw, elemental mineral, a vitally important colour, because it is so deeply intertwined into the essence of our history and survival. 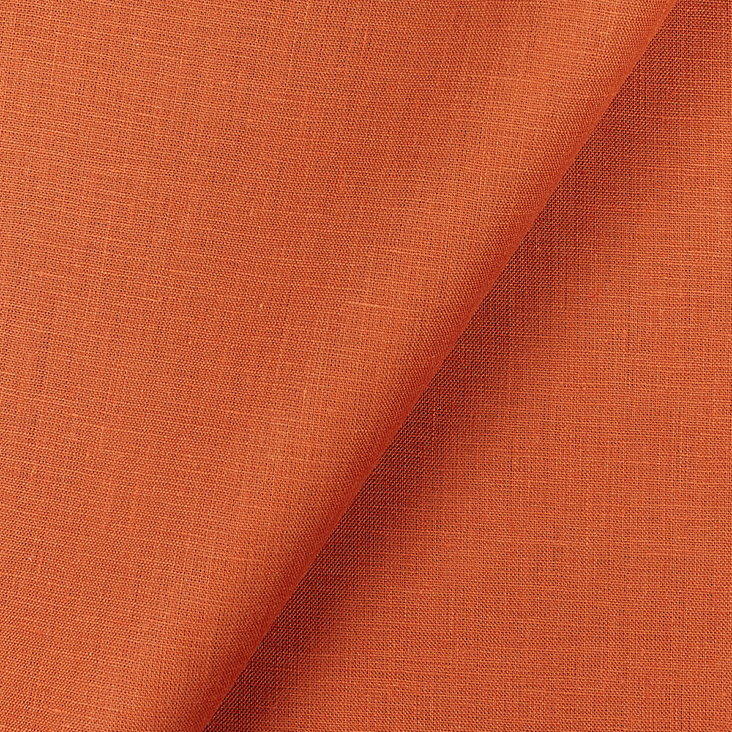