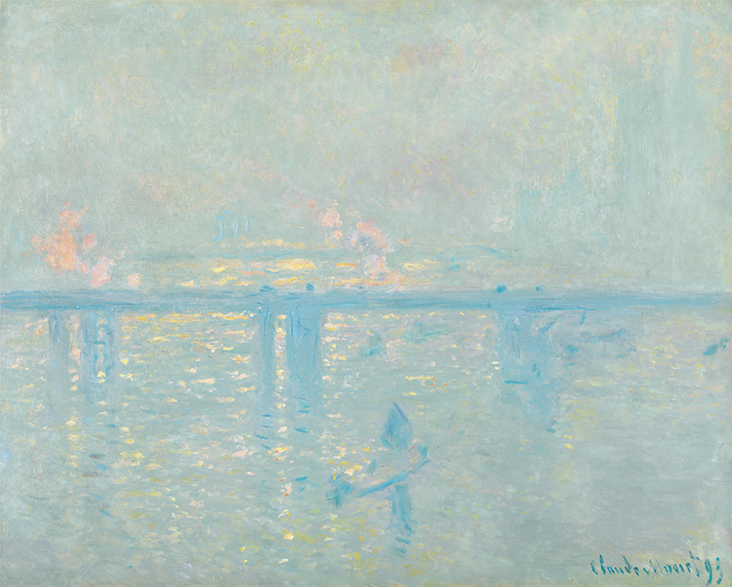 Hovering somewhere between green, blue and soft grey, MEADOW linen has a mysterious ambiguity, like misty fog gathering over a salty sea. In French Impressionist Claude Monet’s hand this colour was transformed into flickering patches of cold, airy morning light or a smoggy, enveloping haze. The mutable, changeable nature of this colour reflected Monet’s fascination with the fleeting nature of space and atmosphere, as he reflected: “For me, a landscape does not exist in its own right, since its appearance changes at every moment; but the surrounding atmosphere brings it to life – the light and air which vary continually. For me, it is only the surrounding atmosphere which gives subjects their true value.” 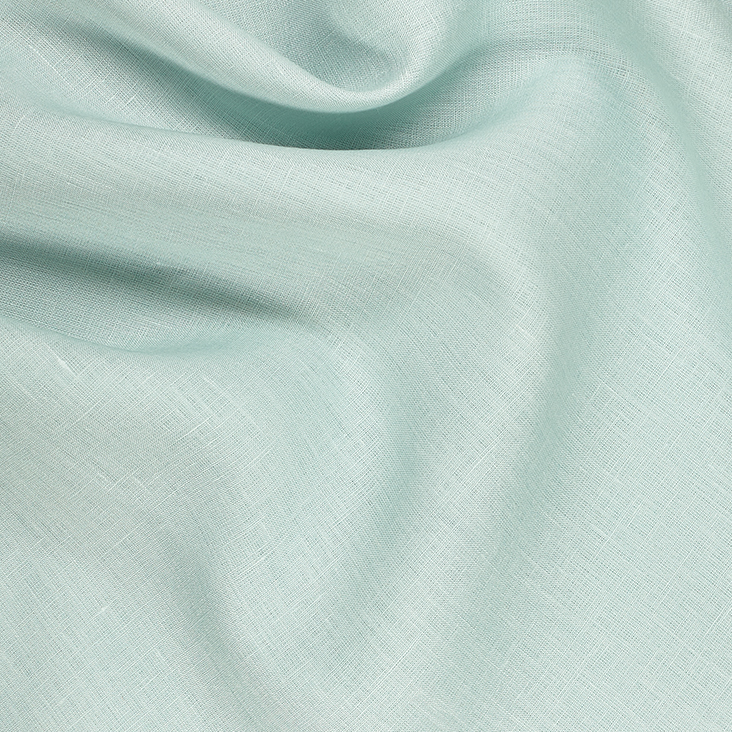 Growing up in the French coastal town of Le Havre Monet was fascinated by the ocean light, often skipping school to go for walks along the rugged, windswept coastlines. The celebrated landscape painter Eugene Boudin taught Monet to paint directly from life en plein air, and how to translate the enlivened spirit of his surroundings on canvas with swift, repetitive brushstrokes, as Monet reflected “I am following nature without being able to grasp her.” After moving to Paris to study at the avant-garde Academie Suisse, Monet met Camille Pissarro, who would become a lifelong friend and fellow Impressionist, sharing a mutual fascination with landscape, light and weather patterns. Following military service in 1891, Monet studied in Paris under Charles Gleyre, where he met likeminded artists in Pierre-Auguste Renoir, Frederic Bazille and Alfred Sisley, founding with them the French Impressionist style. 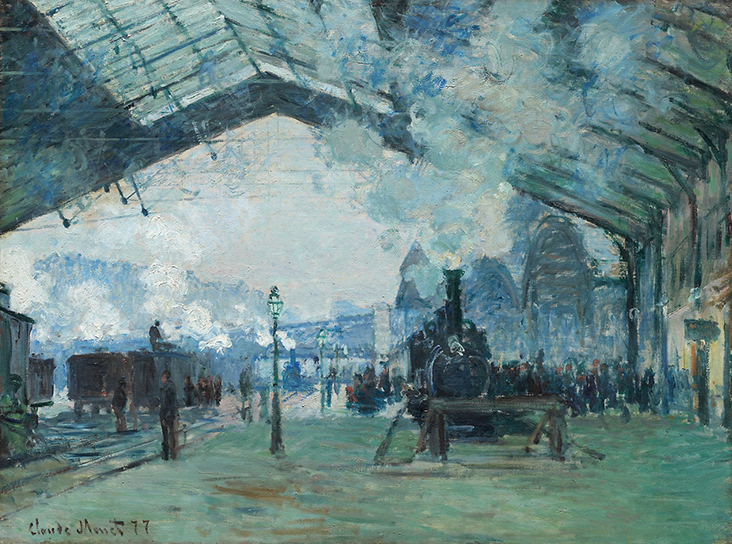 Monet lived in various rural districts outside Paris as a young artist, but he often holidayed in the French coastal areas of Normandy, where he could indulge his lifelong fascination with the play of light across water. Arrival of the Normandy Train, 1877, seems to anticipate the coast he longed to return to again and again by train, as the station is transformed into a sea-stained palette of dappled green and blue light. In The Hut in Trouville, Low Tide, 1881, sea and sky merge into one as pale green and blue light weaves across a broad expanse of wide, empty space, capturing a sense of unbridled freedom. Painted in the same year, A Spot on the Banks of the Seine, 1881 portrays the view through thick grasslands and wild trees towards the river Seine near Monet’s home at Vetheuil. Cool, minty green light bristles across the tops of the trees, carried along by a whisperingly soft breeze. 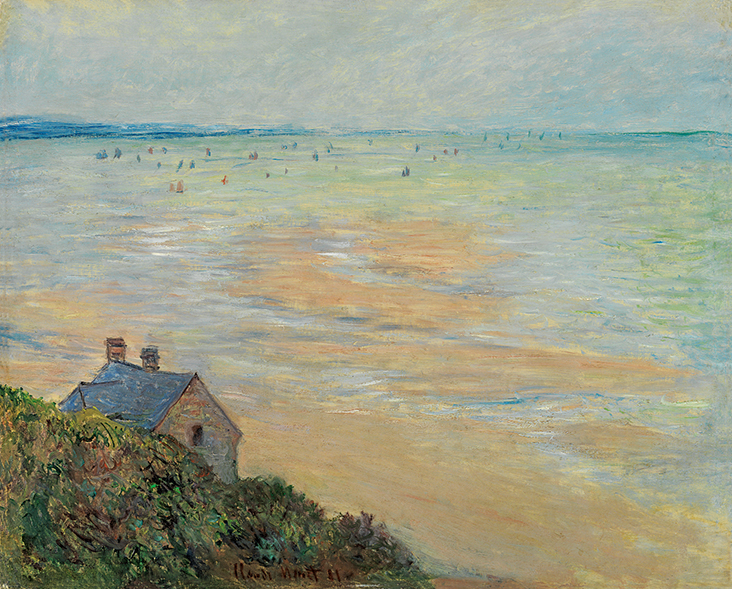 Throughout the 1880s Monet regularly visited Etretat in Normandy, painting the natural stone arch known as the Port d’Aval more than sixty times, never tiring of its close interaction with the surrounding sea as it gradually erodes back into the ocean. In the painting Regnvaer, Etretat, 1886 we see the famous stone arch as it almost dissolves into misty, swampy sea tones that undulate back and forth as they travel in and out of the stormy light. “Colour is my day long obsession, joy and torment,” he wrote as he obsessed over the subtle, transmuting colours before him, constantly slipping from one shade to another before his eyes. 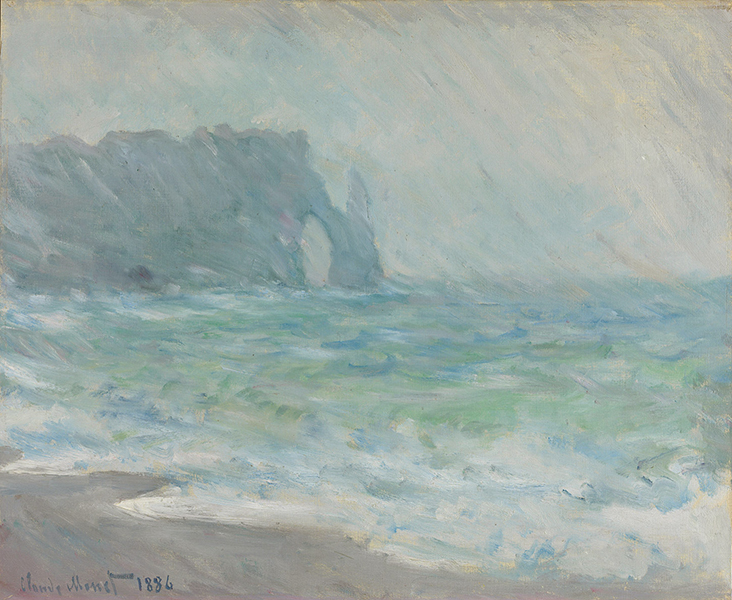 Between 1899 and 1901 Monet made several visits to London, where he became entranced with the city’s smog, which could dissolve solid matter into a foggy, indistinct haze. He wrote, “Without fog, London would not be beautiful.” Waterloo Bridge, Gray Weather, 1900, captures the city amidst dwindling, mysterious evening light in soft blue tones with pale green strands bringing warmth to the surface as the bridge, water and sky merge into one another. 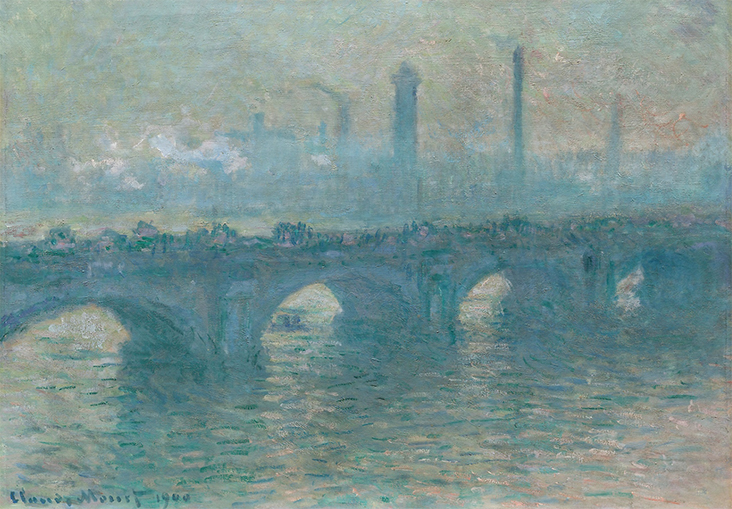 Settling in his famous waterlily garden at Giverny in his later years Monet began to remove the sky completely from his work, allowing the aqueous, mirror-like surface of water to reflect the ever changing sky in vast, abstract patterns of liquid light. In Water Lilies, 1905, pale green lily pads and powdery pink flowers float over shadowy depths of undulating water, drawing our eye to the surface and scattering it with a stream of light, breezy air, encapsulating the enduring, sunlit atmosphere of their iconic setting.