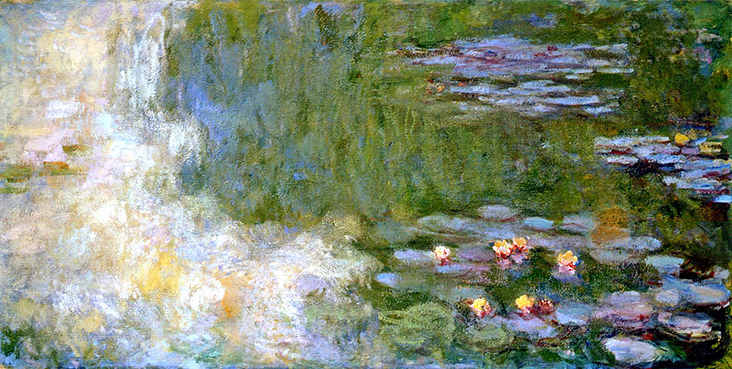 VINEYARD GREEN linen is the colour of energy and growth, suggesting fleshy leaves and dense meadows of wild grass cast into an oasis of cool shade. French Impressionist painter Claude Monet saw the rich, vital potential of this colour, returning to it again and again throughout his career to convey the depth and variety of the French landscape. When he stopped painting with black, dark green became the ideal tone to add deep, bass tones of shadow amidst pastel toned, blinding patches of sunlight, earning him a moniker as the ‘painter of light.’ 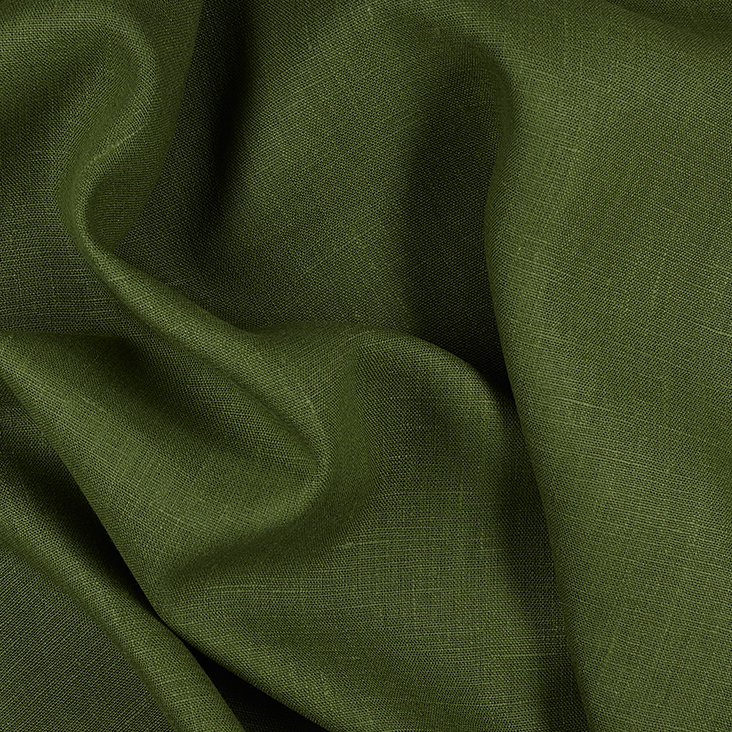 Monet’s career began in the coastal town of Le Havre in the mid-19th century, where he learned to paint glittering surfaces of water en plein air alongside celebrated artist Eugene Boudin. On discovering the wonder of painting directly from life, Monet wrote, “It was as if a veil had been torn from my eyes; I had understood. I grasped what painting could be.” Monet moved to Paris to study art in 1859, meeting the future Impressionist painters Pierre-Auguste Renoir, Frederic Bazille and Alfred Sisley and forming alliances with a band of revolutionaries that would last a lifetime. 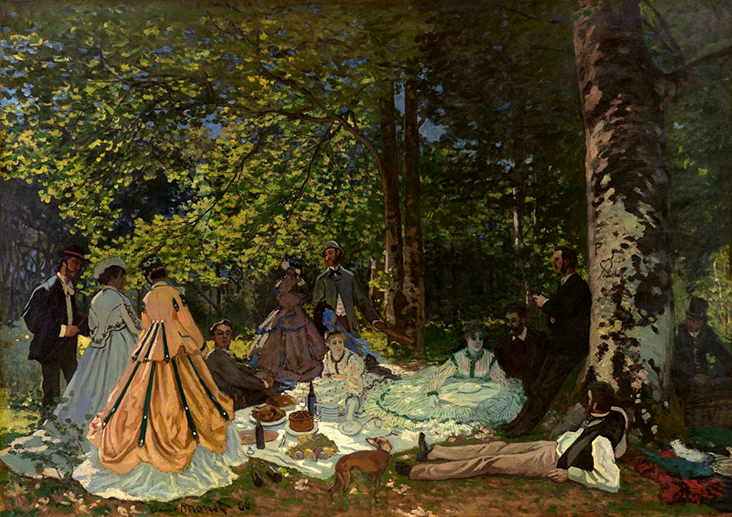 Luncheon on the Grass, 1865 was an ode to the Modernist art rebel Edouard Manet, who placed nude women amongst fully clothed men in his Dejeuner Sur L’Herbe, 1863. Painted on location in the French village of Fontainbleu, Monet’s homage was initially meant as a study for a larger work which was never made, yet even in this small, early work we see the flickering light that would come to define his practice; areas of black are nestled amongst zingy apple tones and dark forest greens, allowing patches of light and dark to ripple against one another, creating a true sense of natural light.

By the following year Monet’s use of black had virtually vanished, as seen in the ambitiously scaled Women in the Garden, 1866, painted in the Ville d’Avray. Here women, including Monet’s future wife Camille, are clad in billowing white dresses that bring searing light into a blooming summer garden, made brighter against areas of dense foliage in dark leafy greens. Similarly, The Luncheon, 1873 captures an intimate, ordinary scene at Monet’s first house in Argenteuil, where he lived with Camille and their young son Jean, who are just visible on the peripheries of the canvas. Patches of cool ivy green nestle amongst warm sienna browns to reveal the true colour of shadows, contrasting with areas of crisp white fabric. 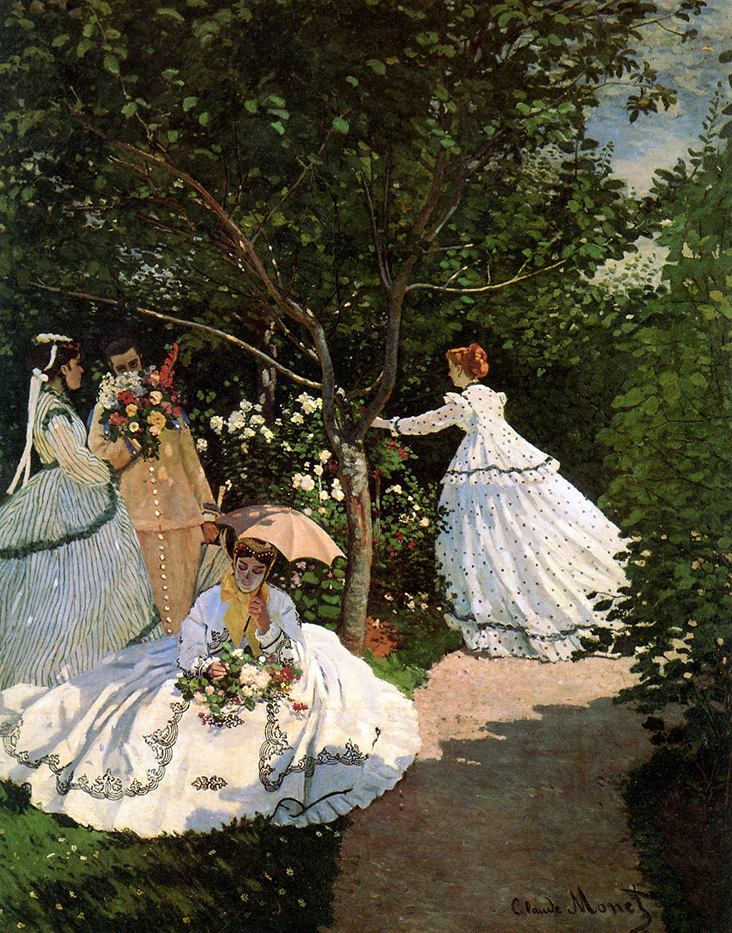 By the 1870s Monet’s plight as an Impressionist had officially begun, with the transience of light, atmosphere and sensations before nature becoming the driving forces in his art. He wrote, “For me, a landscape does not exist in its own right, since its appearance changes at every moment, but the surrounding atmosphere brings it to life – the light and air which vary continually. For me, it is only the surrounding atmosphere which gives subjects their true value.” In Woman with a Parasol, 1875 we see these ideas made real as colour and light take on a life of their own, with the shadowy green parasol dominating the scene as sunlight filters through its sheer surface, singing with vibrancy against a cerulean blue sky. 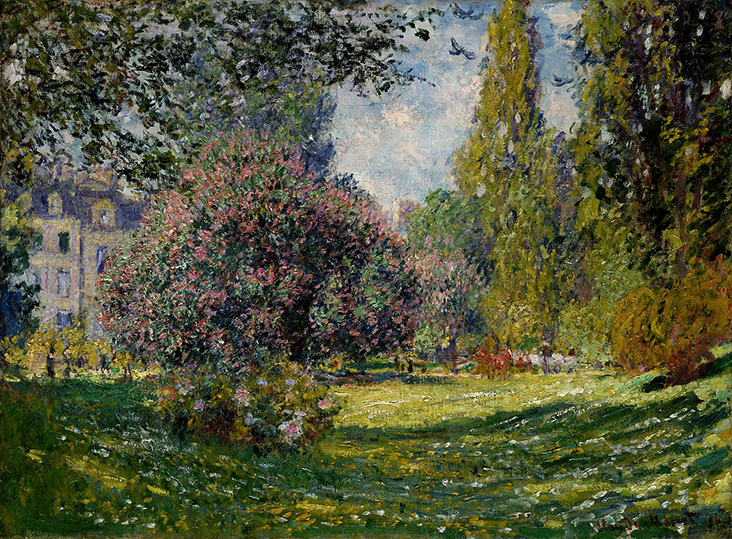 In 1876 Monet made several studies in Paris’ Parc Monceau, where fleeting, spectral figures are almost engulfed by forest green foliage that shimmers with patches of dappled green light – over the next few decades, figures would disappear entirely from view. By the 1880s Monet had moved to Giverny, and in 1893 he acquired land with a pond nearby, where the rugged, overgrown garden became a source of ongoing fascination that would fuel the last 30 year lap of his career. A keen horticulturist, Monet revelled in the changing landscape of his garden, where he could cultivate a private space, “for the pleasure of the eye and also for motifs to paint.” Water Lilies and Japanese Bridge, 1897-1899 is one of a series featuring a footbridge as structure amidst a deep sea of green light. In his final and most ambitious series, Monet made over 250 studies of his water lily pond at Giverny, including Water Lilies Nympheas, 1917 and Water Lily Pond, 1917-19. He was fascinated by the endlessly shifting, glassy surface of water as it reflects and fractures life around it, transforming the natural world into abstract, sparkling patterns of light and shade. 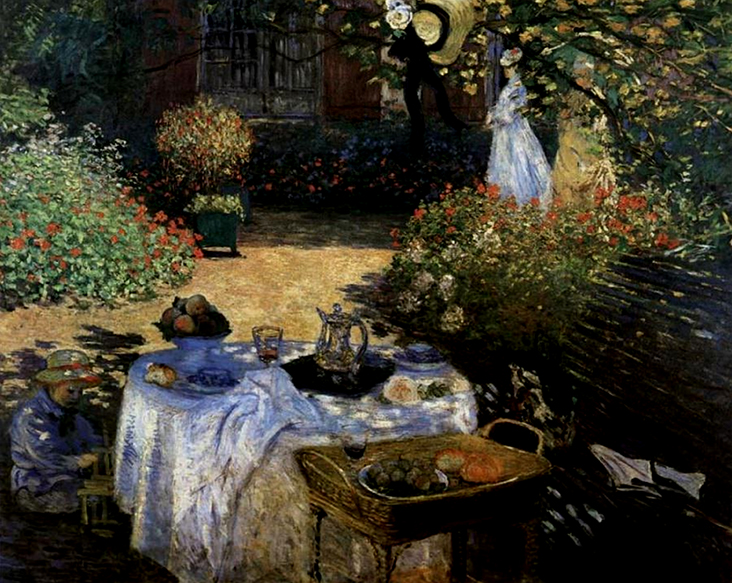