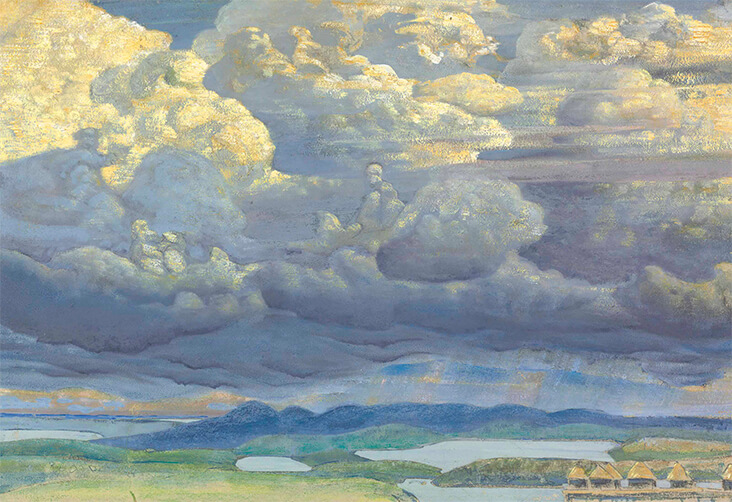 Great towering spires of rock point towards the heavens, while clouds form dreamy, billowing puffs that drift out into endless space. This is the mystical, magical world of Russian-born, 20th century master Nicholas Roerich, a daydreamer who explored art as a pathway towards spiritual awakening. Throughout his long and incredibly prolific career Roerich sought various ways of reflecting the spiritual yearnings of humanity, drawing influence from Eastern and Western religion as well as the novel teachings of Theosophy. His art represented symbols of significance on the pathway towards enlightenment, from places of worship to luminous skies and the lofty heights of mystical mountains. But it was Roerich’s sublime paintings of the Himalayas that became the pinnacle of his career, earning him the moniker: ‘Master of the Mountains.’ 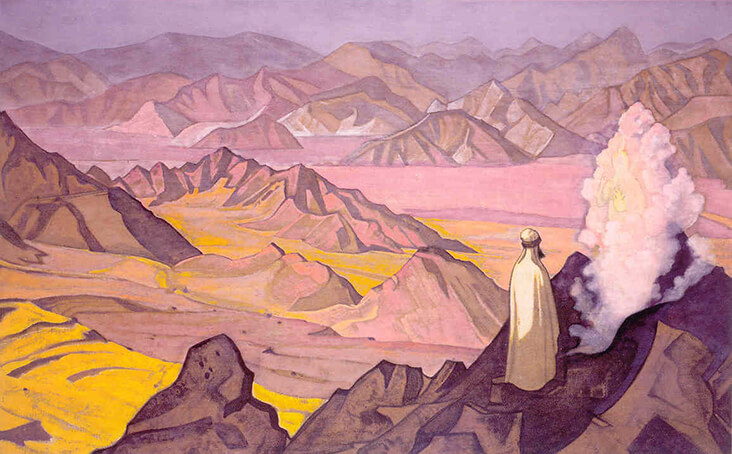 Roerich was born in St Petersburg to a wealthy family who socialised with a pool of writers, artists and scientists. When he was 9 years old, Roerich accompanied an archaeologist on a local excavation, and the experience profoundly shaped his way of seeing the world, giving him a lifelong fascination in signs and symbols of the past. He also developed interests in botany and drawing. In 1893, Roerich enrolled at the Academy of Fine Art and St Petersburg University, where he simultaneously studied art and law.

As a young graduate Roerich travelled widely, visiting Europe and making an extensive tour across forty of Russia’s cities. While travelling through Russia Roerich unearthed remnants of Russia’s past, including churches, castles and monuments. He was deeply fascinated by the way these historical emblems held inside them the spiritual secrets of Russia’s past, and he began making paintings featuring these significant relics, hoping his art might have an impact on their preservation. In 1904, Roerich began exploring religious themes in his art, portraying significant Russian saints and legends, often set amongst billowing clouds and wide-open skies. In The Heavenly Battle, 1909, Roerich depicts a dramatic display of theatrical clouds that suggest ethereal creatures battling in the sky. 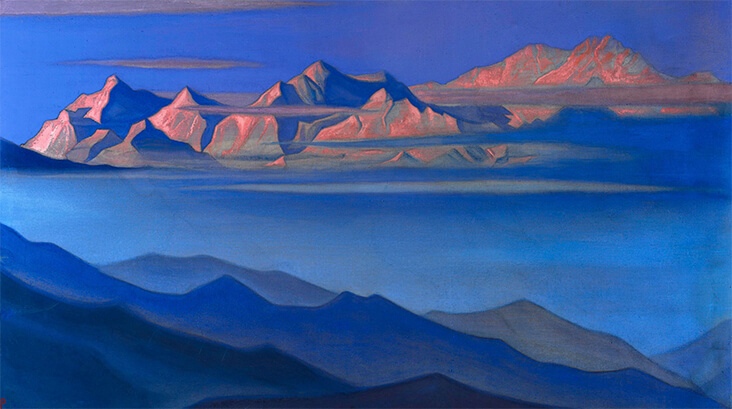 In the years that followed Roerich developed a significant reputation as an artist, teacher, writer, stage designer and preservationist of architectural ruins. He, his wife Marie, and their two young sons continued to travel, spending time in the United States throughout the 1920s. While living in the United States, Roerich’s interest in Eastern religion intensified, as reflected in his ‘Ocean Series’, three paintings made in 1922: Himself Came, The Bridge of Glory, and Miracle. In The Bridge of Glory, Roerich paints Saint Sergius of Radonezh walking near a blue bridge which is formed by the aurora borealis, a symbol for the bridge between heaven and earth. 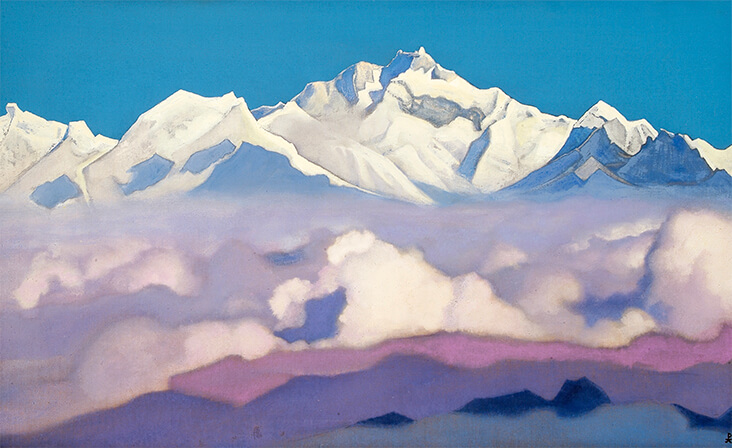 In the 1920s Roerich and his family travelled to Bombay, and began a daredevil tour of the Himalayas, travelling through untracked territory in order to learn about Eastern religion and culture on a deeper level. Incredibly, Roerich made around 500 paintings based on this life-changing trip. Roerich documented his arduous journey in the book Heart of Asia, 1929, likening the hazardous conditions he encountered to those faced by anyone on a spiritual quest into an unknown state of mind. 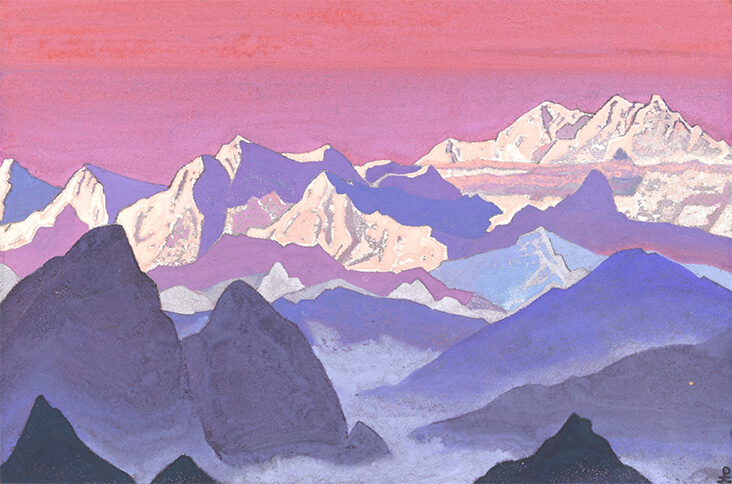 His paintings, including Lahaul, 1932 From Beyond, 1935 and Kangchenjunga, 1944, are, on the one hand, exquisite, atmospheric observations of the monumental landscapes he experienced during his perilous treks through the Himalayas, documenting sublime mountains and breath-taking valley views. Yet they also represent the rocky passageway towards spiritual enlightenment, as mountain peaks point skywards towards the heavens like beacons showing us the way towards fulfilment, and pale pastel blue colours invoke dreamy, meditative, and transcendental states of mind. Roerich was so taken with the Himalayas that he settled in the Kullu Valley of the Himalayan foothills with his family for the rest of his life, where he continued to pursue ground-breaking research and artistic development into the spiritual, symbolic, ecological and emotional significance of mountains.