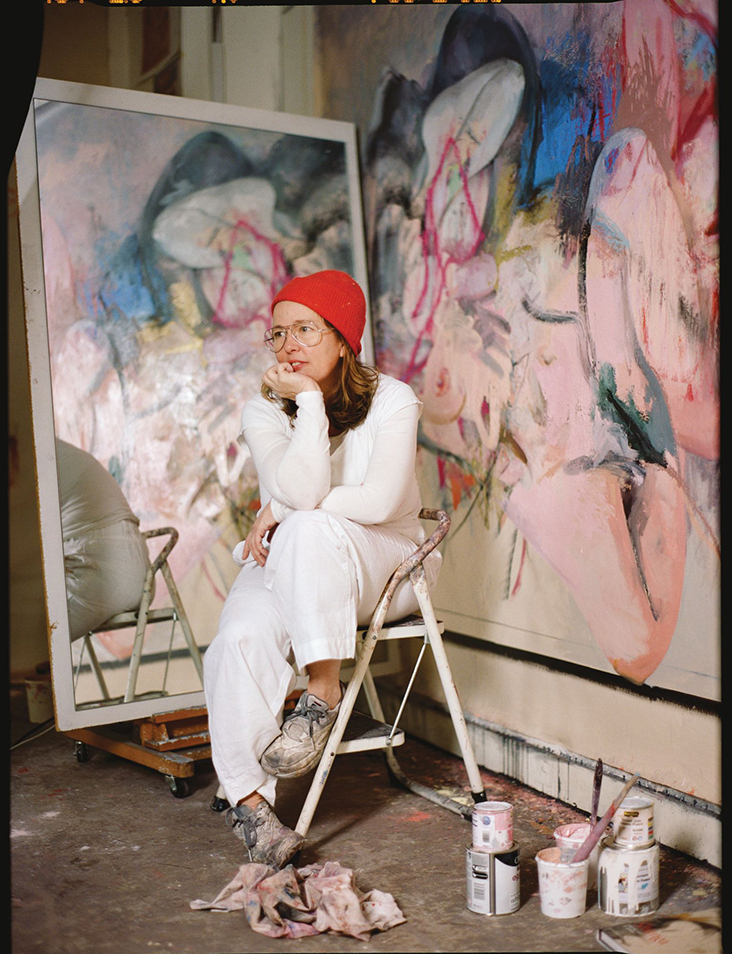 Jenny Saville in her studio

Jenny Saville’s raw and physically direct paintings are all about the true reality of human bodies. Flesh is her primary subject, and she paints it creasing, flopping, squishing and folding over itself in a way that is all too familiar to anyone who has given birth, or experienced the visceral process of raising young children. When Saville became a mother in 2007, she was already an established member of the Young British Artists movement, but the experience of motherhood had such a profound impact on her that she began exploring an entirely new way of making, and it continues to shape her art today.

As a young graduate fresh out of Glasgow School of Art in the early 1990s, Saville swiftly made her name for painting brutally confrontational self-portraits that heightened the theatrical impact of female flesh. Bucking the media trends at the time for supper skinny models, there was a startlingly fresh quality to Saville’s art that quickly earned her a series of accolades and media attention. Over the next decade, Saville continued to paint human flesh in the extreme, showing us bodies squished up close to the canvas, lying on top of one another, or precariously balanced in space. She even spent time studying with a plastic surgeon to understand just how malleable and sculptural the human body could be. 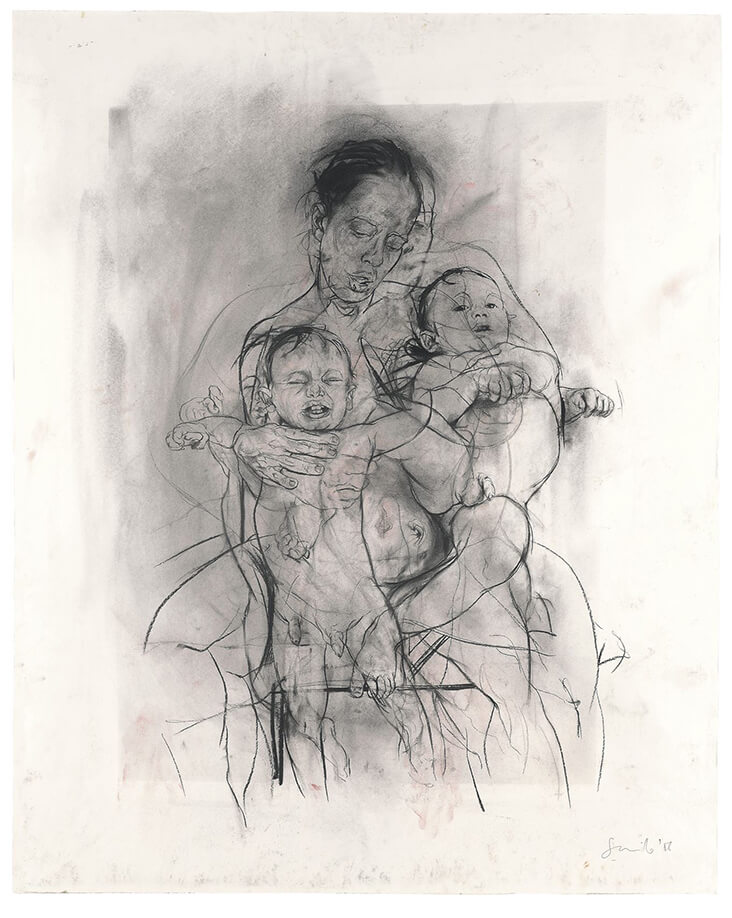 Jenny Saville, Mother and Children (After the Leonardo Cartoon), 2011

By the time Saville came to motherhood, she already had an innate understanding of the mutable and organic properties within the human body. The experiences of being pregnant, giving birth, and simultaneously raising two young children inevitably made their way into Saville’ art. Although she was aware of the historical and Biblical weight embedded in the mother and child subject, it wasn’t a theme she entered into lightly, as she explains, “I had thought about doing mother-and-child images because I… [had] never done anything with children before. I’ve tried to stay away a little bit, about the issues surrounding biology being determined and that women are here to have babies. But, it’s so powerful and I thought, well, I quite like tackling grand, old subjects.”

Of course, there was also the issue of practicality, and how to juggle the competing demands of raising children and trying to be an artist at the same time, but for Saville, the two were never mutually exclusive. She said, “People told me [before I had children] that I wouldn’t be able to engage with my work in the same way once they were born… Anyway, they were wrong. I enjoy the work 10 times more now. It’s still a necessity to me, something I have to do.” 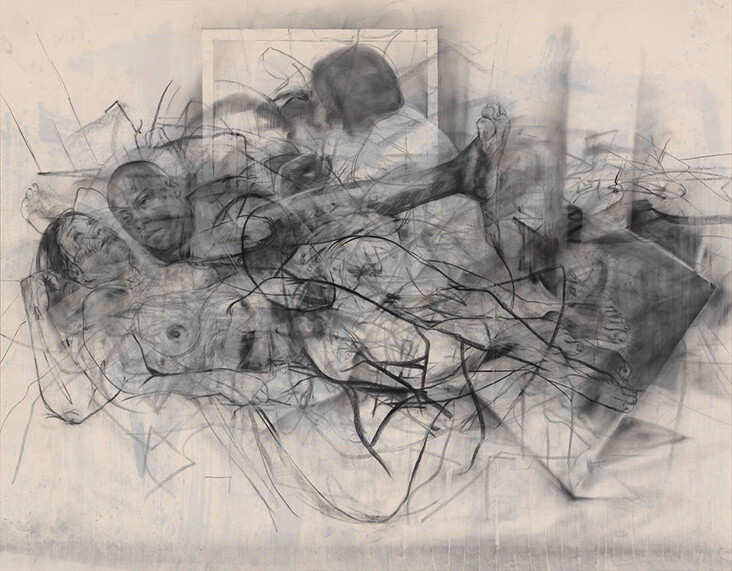 Jenny Saville, In the Realm of the Mothers, 2014

On the contrary, she says becoming a mother opened her up to a new way of working, at a time when she had become quite stuck and typecast in one particular way of painting. Saville says, “I was in danger of becoming a sort of genre painter in the tradition of Freud, Bacon, and Auerbach. But when you’re four, you don’t know genres exist. So, to follow their lead and take away the rules and paint any way you like has been very thrilling. It’s opened up a lot of possibilities: ways to draw, ways to paint, and what kind of bodies I want to paint.”

So, the series of paintings that eventually emerged out of Saville’s baby years were as much about exploring the weighty, historical themes of mother and child that had dominated art history for centuries, as they were about the newfound, spontaneous freedom she had discovered through raising her youngsters. We see these ideas collapsed together in Saville’s energised charcoal drawing Mother and Child (After the Leonardo Cartoon), 2011, which illustrates the swirling, endlessly restless motion of young children with lyrical motion lines that are drawn, erased and re-drawn over one another. “It’s a challenge to make a painting with a child that isn’t sentimental,” she said about this work, which took its starting point from the composition of a Leonardo da Vinci drawing. “It’s a real challenge to actually make the sort of physicality of a baby’s body, and not be cutesy and Baroque and bubbly; to find a dynamic within the body. Children are quite animalistic and that is difficult to create.” Other works in the series document Saville and other mothers while pregnant, and holding young children, with the same sensations of flux. 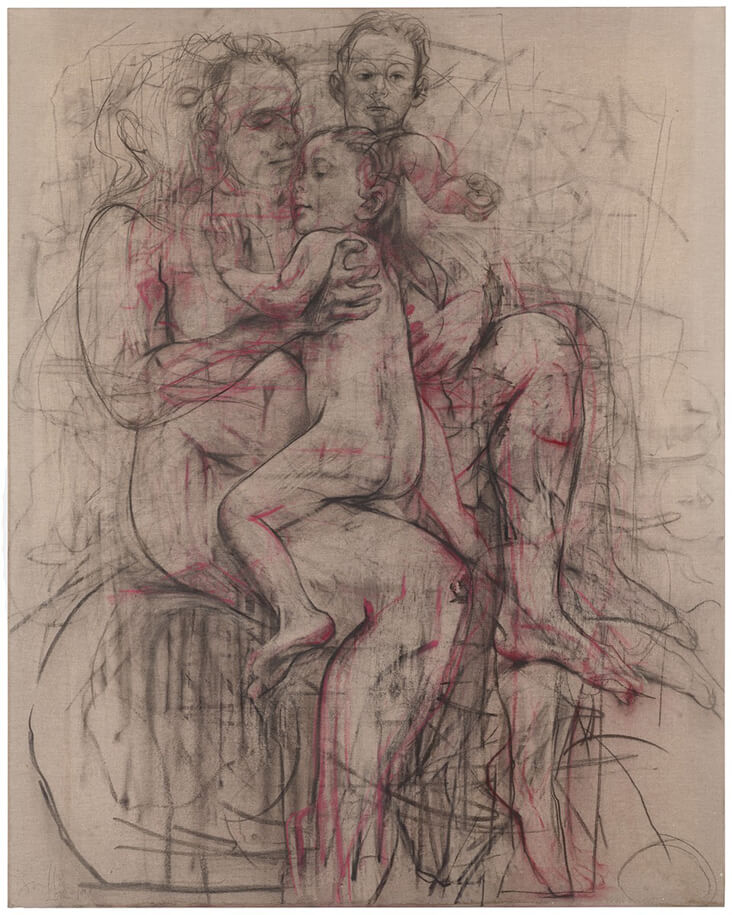 Jenny Saville, Study for Pentimenti I, 2011

Made in the same year, and following the same composition, Saville’s painting Mothers, 2011, bulks out her drawn lines with elements of the fleshy, solidity we saw in her earlier art. When she couples her painterly marks with fluid and expressive lines, Saville is able to capture the wild and free spontaneity of the human body in a new, more expressive language than ever before, one that taps deeper into the reality of what it is to be a woman, mother, and artist in the contemporary world. Saville has since retained this vivid and compellingly complex approach in many of her more recent paintings as she moves forward, explaining, “I’m trying to get simultaneous realities to exist in the same image.”

Founded in 2018, global fashion brand Pangaia make minimalist, relaxed lounge and sportswear with a difference. All their fibres and fabrics are made from naturally derived or recycled sources. They also work with some surprisingly unconventional raw materials, including seaweed, wildflowers, mushrooms, fruits and vegetables, many of which would otherwise end up in waste. Working…

The Bauhaus: A Unity of the Arts

The Bauhaus remains one of the most iconic and influential art and design schools of the modern world, and its legacy lives on today. Founded in Weimar by the great German architect Walter Gropius, the school’s aims were visionary and utopian. Gropius’s goal was no less than an entire unity of the arts, bringing all…

Global sportswear brand Patagonia are passionate about the great outdoors, and the role we play within it. On the one hand, their clothes are tough, durable and built to last, designed to withstand the wildest and most remote adventures the planet has to offer. But Patagonia are also deeply aware of the destructive impact clothing…

In 1933, an art school like no other was founded near the Blue Ridge mountains of North Carolina: its name was Black Mountain College. While the experimental and progressive art school only lasted for 24 years, its legacy has survived far longer. Black Mountain modelled a new, open-ended and unstructured way to teach liberal arts,…